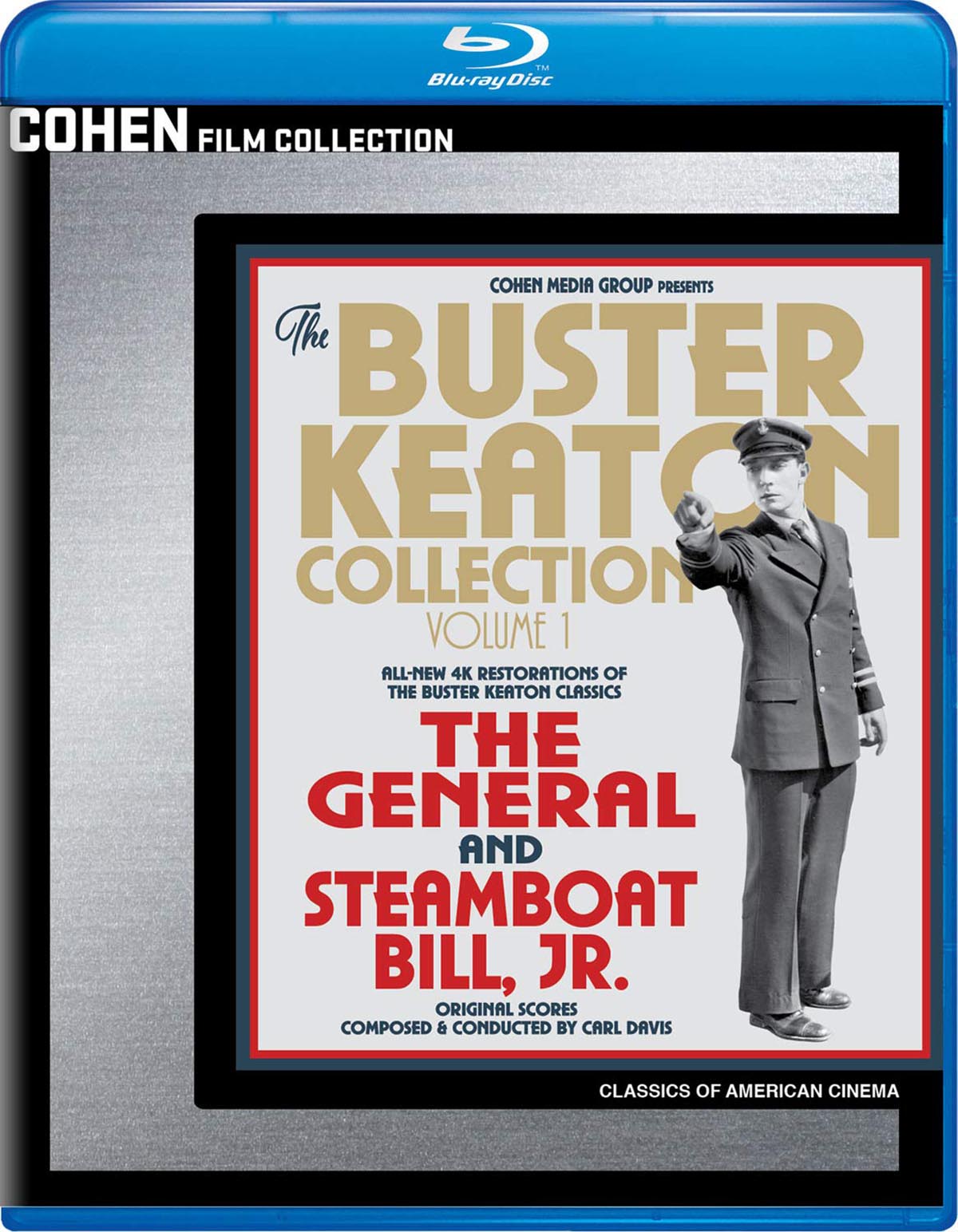 A Buster Keaton creation that combines the classic form of his earlier man-on-a-quest comedies with the visual heft of a Civil War epic, The General isn’t likely to be the favorite opus of the star’s purist fans, but it’s the one with the trappings of ambition and historical poesy. The melancholy behind Keaton’s comedy, visible in his lionized Great Stone Face, is a natural match with his Johnnie Gray, a railroad engineer and Southern everyman who becomes a hero of the lost cause after being rejected for military service on the basis of his vital profession. (The film does no propagandizing for the Confederacy; in the interests of making the story—loosely based on an actual 1862 incident—that of an underdog, Keaton felt his hero had to be a Southerner.) Still an iconic clown with an unsmiling sense of purpose, Buster the actor-filmmaker-stuntman makes the context work; in this singular larger canvas, he takes over the War Between the States.

Johnnie not only suffers from feelings of inadequacy as a result of the army rejecting him without an explanation, but also from the sting of being dismissed by his fiancée, Annabelle Lee (Marion Mack), for being a coward (she’s unaware that he tried to enlist). He then responds to the theft of his titular locomotive by Union raiders with a one-man campaign to recapture it that forms the entire second movement of The General. Running down the track toward the horizon, then by handcar, bicycle, and finally by newly appropriated locomotive, his chase is one of frenzied resourcefulness and experimentation. Keaton measuring gunpowder in his hand as if it were salt for a piecrust is just as indelible as his riding on the front of the steam engine’s cowcatcher, knocking saboteurs’ planks off the railway.

It’s the film’s symmetrical chase framework—engineer Johnnie’s pursuit, then his retaking of the General and flight to warn the South of an imminent Union attack—that makes a lovely visual match with Buster’s paradoxical physicality: the deadpan man in perpetual motion. The early scene of Keaton, after being dumped by the belle, sitting heedlessly desolate on a train axle as it rotates him slowly through space, is a sublime hint of what’s ahead; through mechanically powered heroism, he must recover his two loves, the girl and the locomotive. (Even when he presents his intended with a photo, it’s of himself stolidly posed in front of her wood-burning rival.) Mack’s plucky but bird-brained sweetie—idealized in one “cameo” shot when the engineer, hiding, stares at her through a cigar burn in a tablecloth—takes time during their escape run to sweep out the engineer’s cab and toss out needed firewood whenever she finds a knothole (Keaton lunges to choke her but swiftly improvises a kiss).

In staging a mammothly expensive railroad bridge disaster near the climax, Keaton and co-director Clyde Bruckman impress not only with the scene’s pyrotechnics and dramatic impact, but the comic reaction shot of a nonplussed Union commander. The General affirms the star’s unflappable heroic persona in more unfamiliar and solemn circumstances than lesser comedians have dared. If it doesn’t possess the same otherworldliness and surrealistic flair of The Navigator, Cops, or Sherlock Jr., its marriage of reliably brilliant clowning with a simulacrum of the Great Conflict (still a living memory for its original audience’s older members) lacks the self-importance and pretension that usually hobbles history represented on film. Keaton was no purist, and he cited the film as his personal favorite.

The capper of Keaton’s final independent production, Steamboat Bill, Jr.’s climactic cyclone sequence provides some of the most iconic images of its visionary creator. Awaking in a hospital to discover that a storm has lifted the walls and roof of the building away, Keaton and his bed are blown through the streets and into a stable. Then, in the street, he struggles headlong against the wind, crouching and leaping into it like a souped-up, literalized version of the familiar pantomime cliché. Finally, taking refuge in a theater, he eerily encounters the gaze of a ventriloquist’s dummy and the trickery of a magician’s “vanishing” platform.

Most indelibly, he stands frozen, pondering his next move, as the full façade of a house topples over him, crashing with unsimulated force and sparing Keaton’s Willie Canfield as its upper window neatly and harmlessly frames him. (A spectacular refinement of an older Keaton gag, it caused his camera operator to look away in fear.) This finale, concluding with the star’s typical redemptive heroics, is among the most happily realized expressions of the central motif found amid his immaculately choreographed slapstick: a lone young man rising to battle human and natural obstacles with balletic, kinetic energy.

Steamboat Bill, Jr. also features Keaton’s strongest treatment of father-son relations, as his freshly graduated twit arrives in a Mississippi River town from Boston with a foppish mustache, beret, and ukulele, appalling his two-fisted father, William “Steamboat Bill” Canfield (towering, flinty Ernest Torrence). The grizzled pop is in danger of losing business for his rustbucket paddleboat to the sleek new steamer of his hated rival, whose daughter happens to be Junior’s classmate and potential life-mate (16-year-old Marion Byron, peppy and cute, but sort of an afterthought compared to other love interests in Buster’s oeuvre).

It’s Bill Sr.’s efforts to masculinize his dubious heir that make up a sizable chunk of the plot, from a rapid-fire store scene where Keaton reacts to being lidded with a dozen hats—including a glimpse of his otherwise absent trademark porkpie—to the slovenly Steamboat Bill’s slow burn when the lad boards his boat for work, snappily outfitted like an officer of the Titanic. In the film’s most sustained comic set piece before the windstorm, Willie attempts to smuggle a saw via a loaf of bread to his jailed father, and the series of gags and reversals finds Bill walking back into custody in solidarity with his son. The familial theme has an affecting emotional undertow that’s never heavy-handed.

If Steamboat Bill, Jr. is Class 1A among Keaton’s prime work rather than top-shelf (like his previous seacraft-set The Navigator), its concluding 15-minute showstopper is a high watermark in imaginative, exhilarating entertainment. Audiences or lone viewers are more apt to open their mouths in astonishment than laughter, both at the audacious stuntwork and the odd, forbidding universe created by this placid, soon-to-decline Kansas vaudevillian. Like The General, it was a box-office flop, and Keaton’s move to MGM the following year meant a loss of control over his work, but the first dozen years of his filmmaking career produced uncannily conjured works by an artist with few peers in American cinema.

Both films are presented here in new 4K restorations. The higher level of detail visible across both films is welcome, and allows for a fuller appreciation of Buster Keaton’s precise use of the frame. There’s a small amount of flickering in the images of Steamboat Bill, Jr., but this appears to be an effect of aged filmstock, while The General exhibits sharper contrast throughout. Carl Davies composed the full orchestral scores that accompany both films on this disc. Each of them is a rich and varied score, available as a DTS-HD stereo or 5.1 mix. The latter is particularly engrossing for the way it captures reverb effects on the back channels, conveying an expansive sense of space.

“Reflections on The General” and “Buster Keaton: The Luminary” are five-minute compilations of interviews with an assortment of film heavies (Ben Mankiewicz, Quentin Tarantino, Leonard Malton, and Bill Hader, among others) about Keaton and his influence. Both conclude by imploring viewers to purchase Cohen Media Group’s Blu-ray release of Peter Bogdanovich’s The Great Buster: A Celebration in order to see the complete interviews. These barely glorified commercials are accompanied by two more commercials: trailers for the theatrical release of the two films’ respective restorations. The accompanying booklet contains a few stills from the films but no essay—or much text at all, other than a chapter listing for both films and (befuddlingly) an abbreviated cast and crew list for Steamboat Bill, Jr. only.

This Blu-ray release of two of Buster Keaton’s greatest films does justice to the silent comedian’s visual genius, but its nominal extras are little more than advertisements.