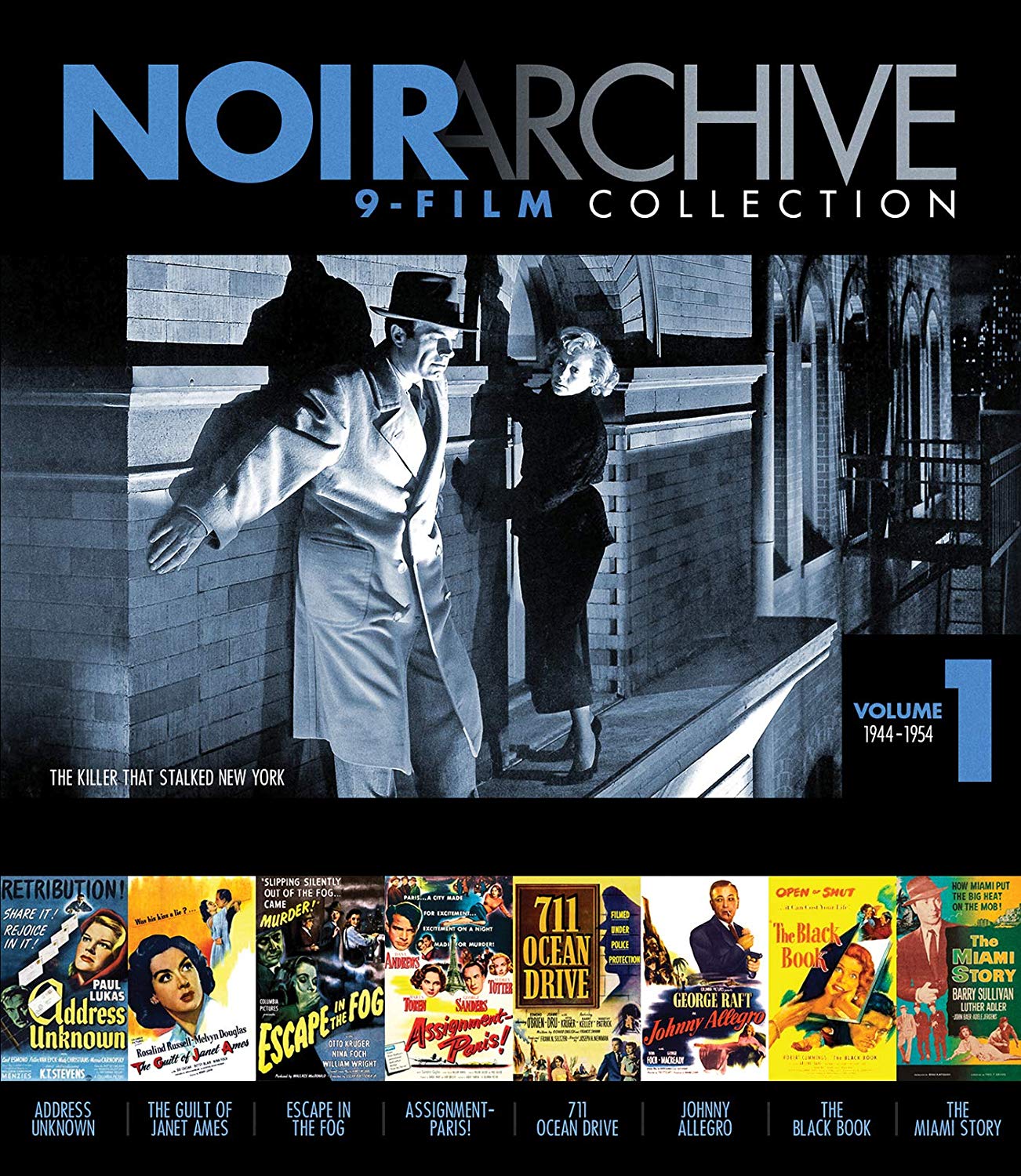 Given their shoestring budgets and tight shooting schedules, B noirs invited on-the-fly creativity from their makers, and their oft-gritty sense of urgency allowed them to stand apart from their slicker, more star-driven “A” counterparts. The feverish intensity of many B noirs is also typically matched with a briskness and efficiency bred from the pragmatic necessity of having to clock in under 90 minutes in order to fit into the second half of a double bill. And in no small part because the studios behind these films were mostly concerned with filmmakers coming under budget and producing work as quickly as possible, the men and women behind the camera were often freer to address a more diverse array of subjects that the more prestigious studio noirs typically weren’t able to touch.

Pity, then, that so many of the B noirs made in the 1940s and ‘50s have been lost to history, a matter that Noir Archive Volume 1: 1944 – 1954 is hoping to remedy. The set presents restorations of nine films of varying quality that collectively offer a fascinating overview of the thematic evolution of the B noir throughout the decade when its parent genre was at its peak. And as all of these selections were released through Columbia Pictures, the set highlights this particular studio’s dexterity in seamlessly folding an impressive assortment of social problems and political commentaries into their productions.

The subject matters of these less-than-hard-boiled films are intriguingly tied to the anxieties and complications of their times: the rise of Nazism, Cold War espionage, horse-racing rackets, post-war guilt and malaise, and more. And these films are all the better for being absent of the pomp and preachiness that plagued so many other social-issue films from the era, evincing instead a no-nonsense fortitude and narrative tautness that leads to even the weakest of these movies to barrel ahead with a fearless certainty of purpose.

The earliest films here present a prismatic perspective of America both during and immediately following WWII. Among these, William Cameron Menzies’s Address Unknown is particularly fascinating for its candid depiction of the lure of propaganda. The film resists the temptation to lean into the cheap nationalistic pride that defined so many other wartime pictures. In fact, the main character’s transformation specifically addresses the dangers of blind nationalism: Martin Schulz (Paul Lukas) is an intelligent, seemingly compassionate German-American art dealer who turns on his Jewish best friend (Morris Carnovsky) and soon-to-be Jewish daughter-in-law (K.T. Stevens) in order to join the Nazi cause. Address Unknown is also the very rare film that delves into the humiliation faced by the German people in between the two World Wars and how it paved the way for Hitler’s rise to power.

Budd Boetticher’s Escape in the Fog is another unique WWII yarn, playing out through the perspective of a military nurse (Nina Foch) whose visions of a future murder give way to a tale of espionage that, although fairly by the numbers, packs a lot of narrative twists and turns into just over an hour. Henry Levin’s The Guilt of Janet Ames, on the other hand, feels padded even at a mere 83 minutes. The weakest entry of this set, it gives an abundance of ammunition to critics who see noir built out of misogyny and nothing else. Working overtime at devaluing the suffering of the eponymous war widow (Rosalind Russell), Levin’s film even goes so far as to suggest that the death of Janet’s husband was her fault because of her perpetual nagging and negativity. The femme fatales of noir are often couched in society’s fears of newly empowered women, but The Guilt of Janet Ames never manages to balance its blatant victim-blaming with any redeeming characteristics to offset the bad taste it leaves in the mouth.

Of the set’s ‘50s films, only Joseph M. Newman’s 711 Ocean Drive stands out as above average. Despite the film’s familiar narrative trajectory, Newman breathes new life into the story of a regular joe’s rise and fall in the criminal underworld with a ripped-from-the-headlines immediacy, whip-smart dialogue, and a nimble sense of pacing.

Ironically, the true gem of the set is the film that, at least on paper, seems like the least noir of them all: Anthony Mann’s The Black Book, also known as Reign of Terror. Working with famed cinematographer John Alton, with whom he had recently made T-Men and Raw Deal, Mann re-imagines the historical epic as a paranoid fever dream of overlapping conspiracies. In this wonderfully offbeat take on Maximilian Robespierre’s rise to power during the French Revolution, claustrophobic compositions heighten the mania of the ever-scheming characters. And contorted faces are often captured in tight close-ups or entrapped within deep, angular shadows that loom over them like the persistent threat of the guillotine.

The film’s images are as macabre as they are baroque, intensifying the dark, treacherous political underworld in which the drama plays out. One of the most unique of all noirs, The Black Book is a minor masterpiece from a major director, offering up ample evidence of the B noir’s ability to deal with so much more than just gangsters and femme fatales.

The image quality can only be so good on a three-disc set housing nine films, but these selections look surprisingly sharp, largely free of blemishes and possessing a healthy, but not distracting, amount of grain. There are a handful of shots, particularly in 711 Ocean Drive and Assignment: Paris, that look noticeably unrestored, with visible scratches and a resolution that’s closer to SD standards. But these hiccups are few and far between. The images do tend to be on the flat side and the blacks could stand to be a bit deeper, though the set’s stand-out film, The Black Book, does boast remarkable contrast that does right by John Alton’s moody, expressionistic cinematography. The sound is occasionally a bit spotty, taking on a tinny, echoey quality at times, but for the most part it’s more than clean enough to get the job done.

No dice. That said, while some contextualization for the films would’ve been nice, the barebones presentation allows every last bit of space on the discs to go toward ensuring the best possible image and sound quality.

Kit Parker Films’s set is as no frills as the nine films contained within it, and like these B noirs, it offers a bang for your buck that’s hard to pass up.