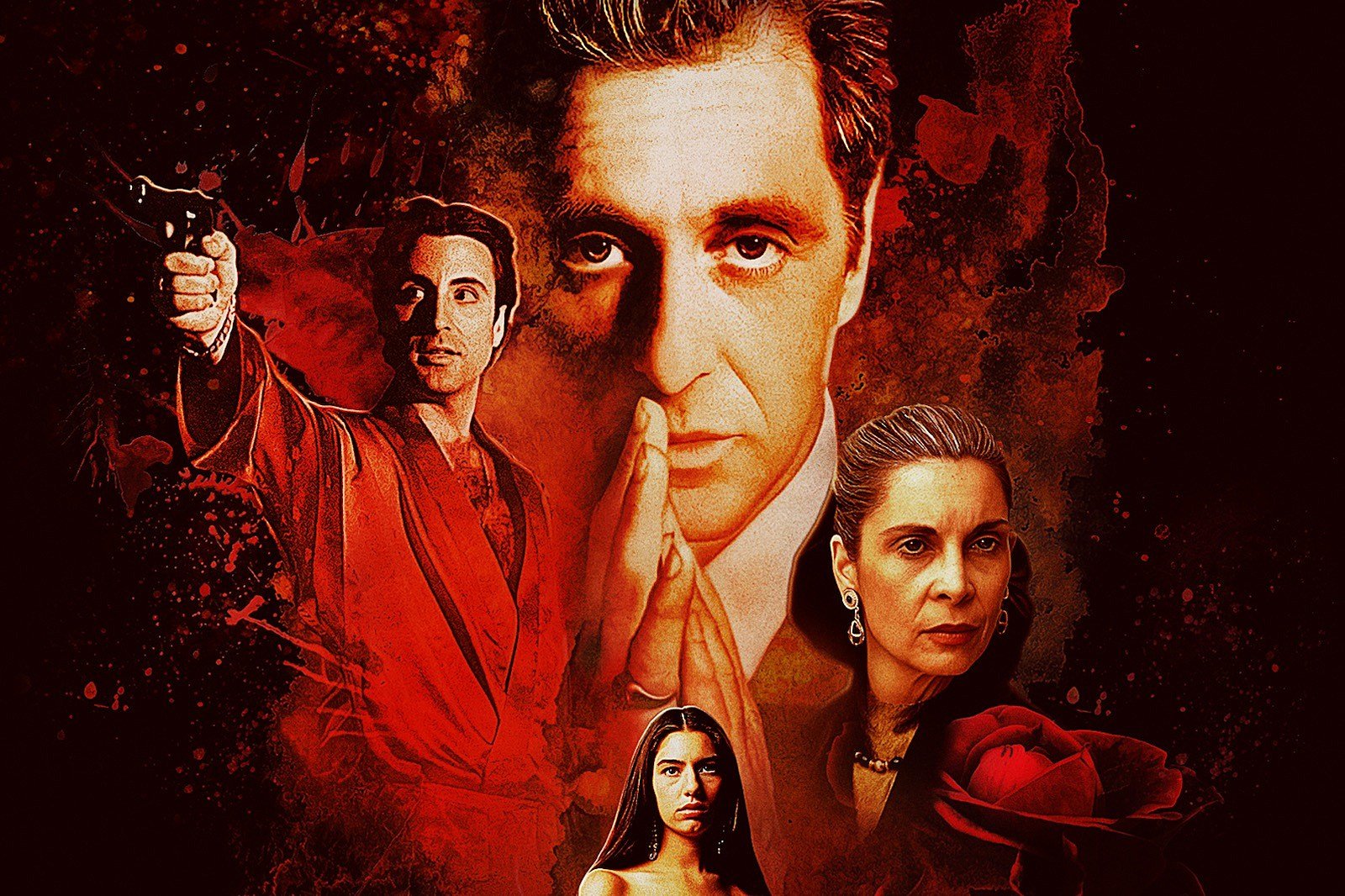 Whatever else might be said of its merits and flaws, the final installment of Francis Ford Coppola’s Godfather trilogy immediately establishes a tone that’s bracing for its bleak, almost nihilistic cynicism. It begins with an echo of the first film’s introduction, albeit with Vito Corleone’s intimate backroom study replaced with the bright, looming halls of the Vatican. Michael (Al Pacino), having long ago legitimized his family’s underworld power by corporatizing it, speaks to the head of the Vatican Bank, Archbishop Gilday (Donal Donnelly), who timidly confesses that his poor, nepotistic investments have lost the Catholic Church countless millions. Michael, who now navigates the rarefied echelons of global society, offers the man $500 million in exchange for controlling interest in an international real estate conglomerate operated by the church. Gilday, who gives the impression of having his palms constantly greased that it’s a miracle he can keep a grip on his cigarette, blanches at the offer, only to swiftly counter with $600 million.

This scene is one of a number of elements that have been changed by Coppola for The Godfather, Coda: The Death of Michael Corleone, a re-edit meant to bring The Godfather Part III more in line with his and author Mario Puzo’s original vision. Here, the conversation between Michael and the archbishop runs longer, presaging this cut’s sharper focus on Michael’s conflict with a corrupt clergy. It also further highlights the film’s central irony, that Michael at long last killed and bribed his way into a legitimate and elite society, only to find that such a life looks just as seedy as the one he ostensibly put behind him. Even the new title gives the game away: Rather than position the story as a continuation of a family’s multi-generational rise, Coppola structures it as a tragic, protracted denouement of a man who sold his soul only to find that those who can give him absolution sold theirs long ago.

The focus on corruption within Italy marks a significant thematic shift away from the prior films’ interests in Italian-American assimilation and ascension. And, yes, a small but significant chunk of the narrative is given over to the inexplicable romance between Michael’s naïve, innocent daughter, Mary (Sofia Coppola), and his belligerently violent nephew, Vincent (Andy Garcia). Though it’s difficult to defend Sofia’s much-maligned performance, it’s hard to imagine even Winona Ryder, originally set for the role, bringing much to an underwritten character whose motivations and behaviors are irrelevant preambles to the film’s brutal conclusion. Which isn’t to say that Garcia is much better, as his understanding of Vincent’s supposedly monstrous, id-driven rage mostly takes the form of empty posturing.

Still, there has always been much to recommend about The Godfather Part III, and Coppola’s new edit has pushed those elements to the foreground. Besides a souped-up restoration that makes a strong case for Gordon Willis’s haunting, almost expressionistic cinematography being the equal of his work on the first two films, the Coda cut rearranges scenes to maintain focus on the film’s evocative central conflict. It’s fascinating to see the Godfather saga thematically end with the Italian descendent who conquered America forced into battle with the ancient, Old World power of the Catholic Church, which fearlessly plays games with the same man that the first two films established as one of cinema’s most terrifying figures.

Curiously, Coppola revises the film’s ending, trading its quiet, final note of an aged Michael slumping dead in his chair for a more purgatorial fade-out on a shattered, lonely man facing the void in exile. This makes Coda seem more than ever like the operatic precursor to The Irishman’s more intimate depiction of apocalyptic moral reckoning. Both films are about men who live by the sword and are unlucky enough not to die by it, instead forced to face the consequences of their life’s sins for what seems an interminable length of time.

While re-cutting the film, Francis Ford Coppola restored it from the negative, and the resultant transfer looks richer and more film-like even than the most recent home-video issues. The rich chiaroscuro of the cinematography looks better than ever, with deep black levels offset by the luminescent golden tones of the color grading. Grain is omnipresent and well-distributed, making for natural textures and fine detail on actors’ faces and background objects alike. The soundtrack is pristine, with Carmine Coppola’s score voluptuously filling the surround channels while dialogue is always clear and separated in the middle speaker.

The only extra is a brief intro by Coppola noting why he recut the film. The director has always been an eloquent apologist for his work, so it’s a shame that he didn’t record a new commentary track for this updated version, or even a longer video delineating the changes in this edit.

Though frustratingly parched for extras, The Godfather Coda: The Death of Michael Corleone smooths out many of the wrinkles of the trilogy’s flawed conclusion, clarifying it as a bombastic yet ultimately insular morality play.