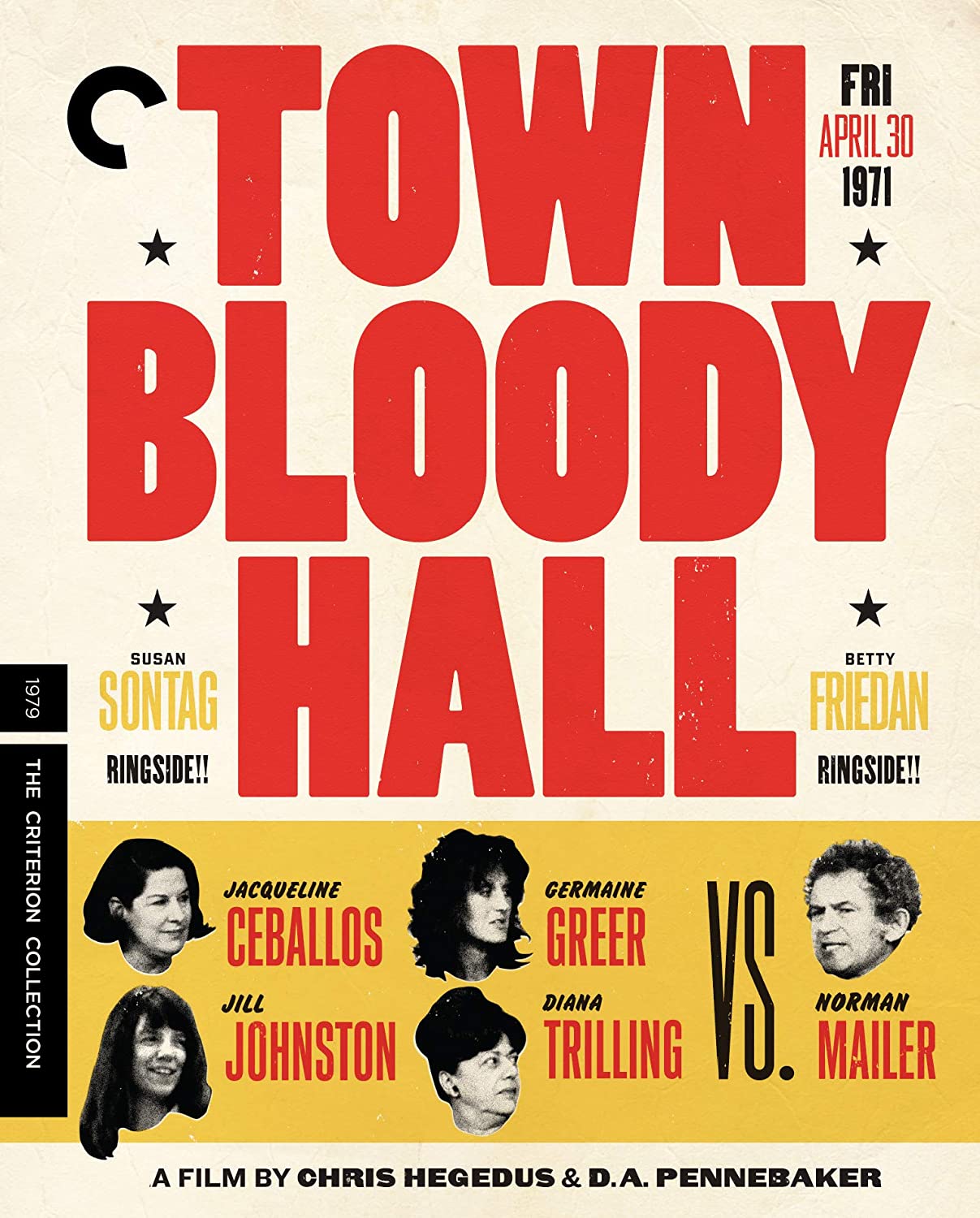 Chris Hegedus and D.A. Pennebaker’s raucous and provocative documentary Town Bloody Hall is a fascinating time capsule from an era when even the most contentious political discourse was still marked by intellectual curiosity and a desire not only to disparage opposing ideologies, but to actively engage with them. When Norman Mailer collaborated in 1971 with New York’s Theatre for Ideas to organize a public debate between himself and four prominent feminists, billed as a “Dialogue on Women’s Liberation,” the author surely imagined something akin to the nonstop verbal jousting that ensued. But despite the fact that cooler heads didn’t prevail, the participants engage in a form of dialectical argumentation that inspires rather than quashes thought, and without sacrificing humor, wit, or pure entertainment value.

Mailer is joined on stage by Germaine Greer, the Australian radical feminist and author of the bestselling The Female Eunuch; Jill Johnston, cultural critic for The Village Voice; Jacqueline Ceballos, president of the New York chapter of the National Organization for Women; and Diana Trilling, the American literary critic. Both the debate and Town Bloody Hall were promoted much like a boxing match, with the four women’s presence promising the New York intelligentsia packing the seats the potential opportunity to see the ever-combative Mailer receive a public drubbing following the recent publication of his controversial, deeply misogynistic Harper’s article “The Prisoner of Sex.” But while Greer, Johnston, Ceballos, and Trilling share a mutual disdain for Mailer, their arguments are remarkably diverse, and in conflict and conversation with those of their fellow feminists nearly as much as they are with Mailer’s. Trilling and Greer, in particular, are so at odds with one another that the latter is provoked to bemoan the fact that oppressed people frequently “fight among themselves.”

It’s the manner in which a ceaseless array of droll, stimulating verbal shots are fired rapidly in every direction, including to and from the rowdy audience, that gives Town Bloody Hall a vitality that helps it transcend the mere documentary coverage of a landmark debate. And as Pennebaker and other cameramen weren’t cleared to film inside New York’s Town Hall, and were thus forced to actively avoid security throughout the shoot, their handheld camerawork feels as raw and vigorous as the debate it captures. The camera rarely remains still, constantly panning across the stage to locate the infuriated response of a panelist or searching the crowd for an amusing reaction shot or whomever shouted out the latest insult or question. It’s a particularly restless and improvisatory form of filmmaking, even by Pennebaker’s standards, and perfectly in tune with the rambunctiousness of the event being covered.

Even with five intellectual titans on stage, the audience serves more than admirably in its role as the wildly unpredictable and engaging sixth man. There are a number of unsurprisingly thoughtful and sensitive questions directed at the speakers from the likes of Susan Sontag and Betty Friedan, but the more virulent outbursts are perhaps even more revealing, exposing both the dark undercurrents of Mailer’s misogyny and one of the major failings of second wave feminism. When a man repeatedly chants, “All of humanity, not half of humanity,” as he walks out early in the event, it’s impossible not to connect America’s rage directed at feminists to its current dismissal of demands for racial equality. And when a woman, who before the event chants, “Women’s lib betrays the poor,” later storms through the doors to proclaim that “women’s lib is for rich bitches,” one is reminded of the very privilege of the crown and panelists, nearly all of whom are white and at least firmly among the middle class.

These intrusions in the debate help to substantiate Mailer’s tongue-in-cheek claim early on that the future “will end with nothing but assholes talking to assholes.” But all the more vitriolic comments, humorous or not, serve as instructive contrasts to the general approaches taken by all the panelists, which while extremely strong-willed, remain, for the most part, intellectually rigorous, both in the formation of their own arguments and their deconstruction of and response to whomever they are arguing against. As such, Hegedus and Pennebaker’s documentary stands as a potent reminder of the importance of imbuing the flair and showmanship of political theater with an unmistakably cerebral form of discourse.

For this Blu-ray release, the Criterion Collection sourced a new 2K digital restoration, supervised by co-director Chris Hegedus. The transfer retains the heavy but even presence of grain typically found in films shot on 16mm, and the color balancing ensures natural skin tones and partially mitigates the harsher lighting in some shots that was caused by spotlights shining on the stage. D.A. Pennebaker’s frequently roving camera results in much motion blurring, but when it’s more stationary, the image is relatively sharp, offering a fair amount of facial detail, particularly in extreme close-ups. The uncompressed monaural soundtrack is free of hisses and pops, and while the dialogue spoken directly into the mics is perfectly clear, the subtitles will certainly help you follow every word shouted from the spirited audience.

The 2004 audio commentary featuring Hegedus and Germaine Greer serves as a perfect complement to Town Bloody Hall. Hegedus keeps the discussion lively, pressing Greer for details on how she felt meeting Norman Mailer, her reaction to the audience packed with New York intelligentsia rather than working-class women, and her opinions on the thoughts expressed by her fellow panelists throughout the film. Greer is particularly thoughtful in analyzing how her perspective on feminism has evolved over the years.

If Mailer wasn’t abrasive and confrontational enough for you in the documentary, Criterion has included the entire 1971 episode of The Dick Cavett Show in which Mailer, fresh off the publication of “The Prisoner of Sex,” appeared alongside Gore Vidal and journalist Janet Flanner. Vidal and Mailer’s bad blood comes to a hostile boil across an interview that sees the two men relentlessly trading verbal assaults, resulting in the typically affable Cavett telling Mailer where he can shove his question cards.

In a new interview with Hegedus, she discusses her early work as part of a collective of independent filmmakers newly emboldened by recent civil rights and environmental movements, as well as expresses the joys of having creative freedom balanced out by the lack of an outlet for films like hers to be shown in the ‘70s. Footage from a 2004 celebration of the film sees several of the panelists and filmmakers speaking of their disappointments in allowing Mailer to hijack much of the discussion and their gratification in having proven that feminists do indeed have senses of humor. The disc is rounded out with archival interviews with Greer and Mailer and a perceptive, comprehensive essay by film critic Melissa Anderson.