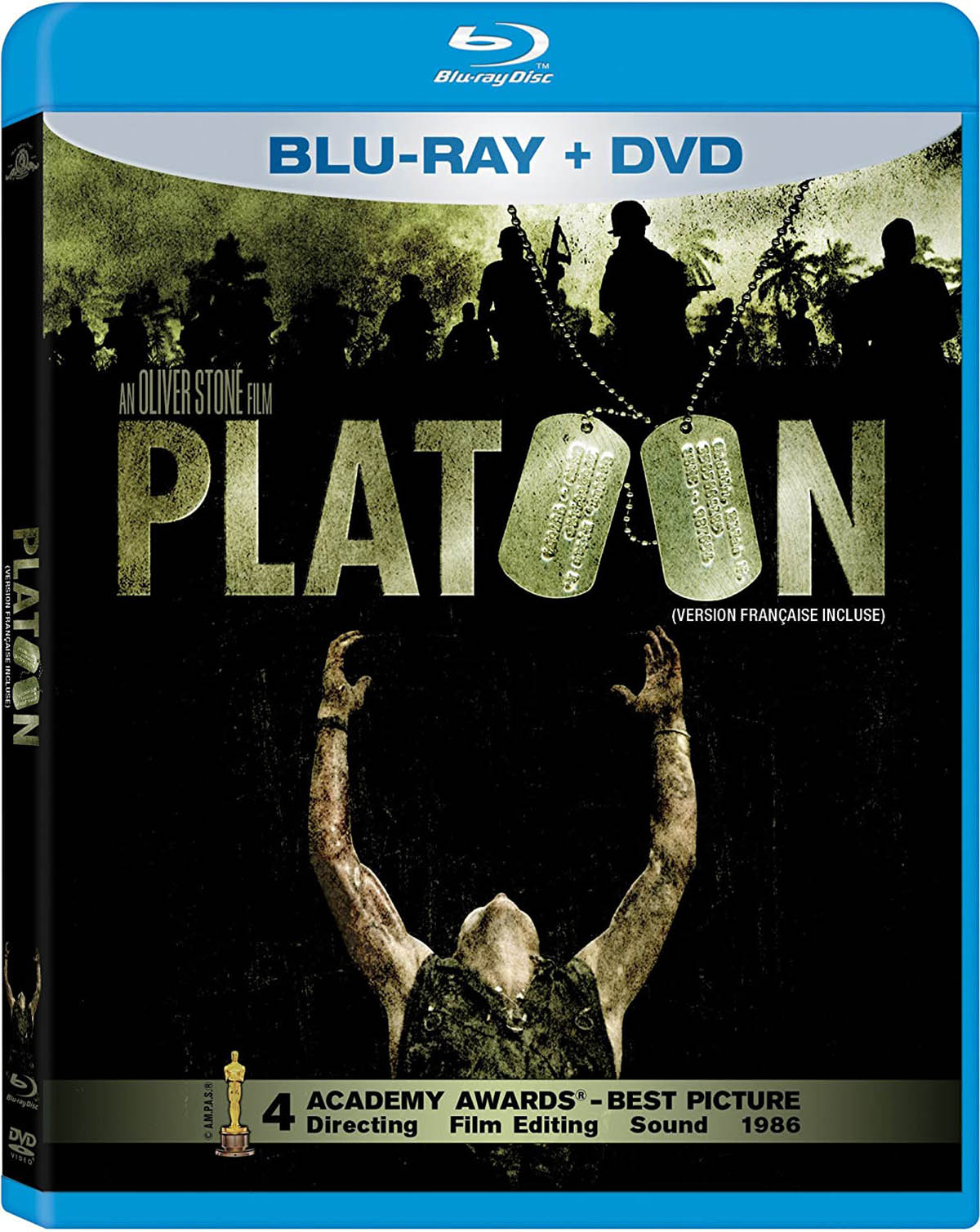 Of the many things that Oliver Stone’s Platoon has been justly heralded for over the years, accuracy of environment has always been the facet that has distinguished it, not only in the canon of films depicting Vietnam, but in Mr. Stone’s oeuvre. This is not only to call attention to how well Stone, along with chief consultant Capt. Dale Dye and production designer Bruno Rubeo, reimagined the dense jungle atmosphere of South Vietnam (somewhere near the Cambodian border) in a patch of jungle a little over a hundred miles outside of Manila, in the Philippines, but to how well he invoked the philosophical infighting between soldiers and subsequently presented a national dialectic on the rules of engagement and the uneasy morality of modern warfare.

For all the admittedly extraordinary nuance that Stone and his collaborators focused on (the bugs and leeches, the use of weaponry, the drugs, the dubious sense of military hierarchy, the utter confusion, distress and panic felt by fresh recruits, the cynicism of veteran combatants), the story being told in Platoon could have taken place on a college campus, during a Central Park rally, at a street-corner demonstration, or a roundtable discussion attended by intellectuals, veterans, and students alike. Nevertheless, the setting allows Stone not only to offer a rebuke to the gross falsehoods of John Wayne’s The Green Berets, but also to give a more experiential treatment of the war that Stanley Kubrick and Francis Ford Coppola had used as settings for cerebral immersions, grandiose statements less on Vietnam than on war as a masculine, imperialistic, and ultimately capitalistic imperative. As much as its central dialectic could have been relocated to innumerable stateside venues, Platoon was a deeply personal recollection by a decorated veteran, a lacerating eulogy for America’s militaristic ideal, and, most of all, one hell of a war movie.

Standing in not only for Stone, but for those who were lucky or rich enough to garner a deferment, Chris Taylor (Charlie Sheen) walks off a plane in the opening scene and essentially comes into contact with two presaged variations of himself: a black body bag being hauled onto one plane, and a hardened, defeated veteran getting on another. Those two images become lodged in Taylor’s mind as he begins his tour of duty with the 35th Infantry Regiment, led by Lieutenant Wolfe (Mark Moses), but essentially run by the opposing forces of Staff Sergeant Barnes (Tom Berenger, in what may be his career performance) and Sergeant Elias (Willem Dafoe, an invaluable presence as always). Though essentially without a structured plot, Stone’s script pivots on the fallout of a handful of murders and other crimes that occur in a small Vietnamese village, at the hands of Barnes and a faction of soldiers loyal to him and him alone, most prominently portrayed by Kevin Dillon and Stone regular John C. McGinley; the event works as a miniature representation of the My Lai massacre, which has yet to be fully recreated in narrative cinema in any country. Elias and Taylor are the chief witnesses of these crimes, representing a sincere, dutiful attempt at clinging onto personal morality among the chaos of war, but also an outright threat to Barnes’s career and hard-bitten mindset.

Opposing parallels abound in Stone’s film, from a bunker filled with hash-smoking, Motown-loving grunts to a den of poker-playing, Budweiser-chugging, Confederate-flag-hanging privates, but they all trickle down from the free-thinking humanist ideals of Elias and the let-God-sort-them-out “reality” of Barnes, making Barnes’s eventual fragging of Elias a fascinating turning point for Taylor. Taylor believes in the philosophies Elias expounds, but he also sees how Barnes is the one who ultimately wins out due to his beliefs, which clash as, in one of the film’s most memorable scenes, Barnes enters the bunker of dope-smokers and challenges them to kill him, to which only Taylor physically reacts. Their conflict is palpable, but it takes a backseat to Stone’s climactic, brilliantly hectic staging of the Tet Offensive, which spurs the concluding confrontation between Taylor and Barnes.

Partially narrated by Taylor through his letters home to his grandmother, Platoon may have Sheen’s character at its center, but it encompasses an admirably wide range of emotions, reactions, and identities. Forest Whitaker, Tony Todd, Johnny Depp, Francesco Quinn, Reggie Johnson, Richard Edson, and the great Keith David fill out minor roles, but add a variety of thematic flavor to the film, especially when considering the racial and economic underpinnings of the war. As a unit, they open up Stone, editor Claire Simpson, and DP Robert Richardson to take in a full view of combat, freeing sequences such as the ambush that ends in Elias’s fragging and the Tet Offensive from having to stay focused on Sheen. It’s an ambitious move, and it pays off by keeping the film agile and unpredictable where so many other war films grow brittle by focusing on a single soldier.

Taylor does survive and there’s perhaps the faintest whiff of an ordinary coming-of-age story in that, as Taylor’s concluding narration attests, the central character was born of the “two fathers” of Elias and Barnes. A little under 40 years after the last American troops pulled out of Vietnam and a quarter-century after Platoon’s championed release, the same two fathers seem at battle, even if they have grown far more radical with years and have become noticeably more fragmented within their camps. It’s fascinating now to consider that, when I first encountered Platoon at the age of 16, the image of Elias final iconic prayer to the sky before dying was what I long-remembered as the ending of the film, neglecting both Taylor’s stand-off with Barnes and the Tet Offensive. Perhaps it was my own neophyte, radically leftist ideals being shattered and yet cynically reinforced with the death of what was, for me, the most reasonable and correct character in the film, but the ultimate corruption of Taylor, his evening out, didn’t even register. Over a decade later, the quasi-adult version of that angry, angst-ridden cinephile may not side with Barnes but can at least understand that war that isn’t experienced can never be fully understood, and certainly has no moral certainties.

In his review of the film, Roger Ebert challenged François Truffaut’s claim that war films are essentially flawed because all war films inherently depict war as “fun” at some point. In truth, the war film only shares that universal flaw of narrative cinema, which is that we are merely experiencing a depiction, and thus, in Platoon, as in all great war films, we are witnessing the depiction of a most staggering atrocity and are thankfully protected from the full emotional weight of the actual atrocity. Still, surfacing from the onslaught of Stone’s film, one can feel a shedding of a certain innocence and taste a bitter wisdom that only great films, no matter their chosen genre, can pass on.

Visually speaking, MGM has put some real muscle into their 1080p/AVC-encoded transfer of Platoon, which is thankfully presented in its original 1.85:1 aspect ratio. The most noticeable upgrade here is to fine detail and overall clarity, which uncovers the hard work put into some of the more minor facets of the production. The makeup work, for instance, really sticks out here and makes you appreciate the tiny bug bites, muddy residue, and most of all, the work done on the casualties. Grain is solid, if not totally sustained, and though there are some moments where specks and spots are visible, the print looks great and maintains a stable picture throughout. Black levels could use some improvement but are admirably handled at the end of the day, as are most other colors, with green obviously dominating the picture overall. The audio is a different story. Though atmosphere noise and sound effects are presented beautifully, there are substantial problems with the mix when it comes to music, whether it be Smokey Robinson or Georges Delerue’s score. All the music seems to be on a leash and held back from filling out the audio field. Dialogue is out front but it’s a mixed bag, with some moments of dubbing that were clearly not balanced well. Most of these problems can be traced back to the production itself, but I wouldn’t be surprised to see at least a better audio treatment arriving in the future.

A pair of excellent commentary tracks, one from director Oliver Stone and one from military consultant Capt. Dale Dye, headlines a bevy of informative and entertaining extras that MGM has loaded onto this release. Both Stone and Dye offer thoroughly fascinating takes on the film that focus on their remembrances from their days in Vietnam and how that informed the production. There’s also a large portion of featurettes covering everything from the impetus for the script to the production to the film’s place in Stone’s oeuvre and finally to the reception of the film by veterans of the war. In addition, there are some very interesting deleted and extended scenes, at least two of which, one could argue, could have fit into the film beautifully. Also included: a DVD copy of the film, television spots, and the film’s theatrical trailer.

MGM has backed their impressive transfer of Oliver Stone’s masterwork with an abundance of extras that prove both entertaining and all-encompassing.

Review: Sergio Leone’s Once Upon a Time in the West on Paramount Blu-ray