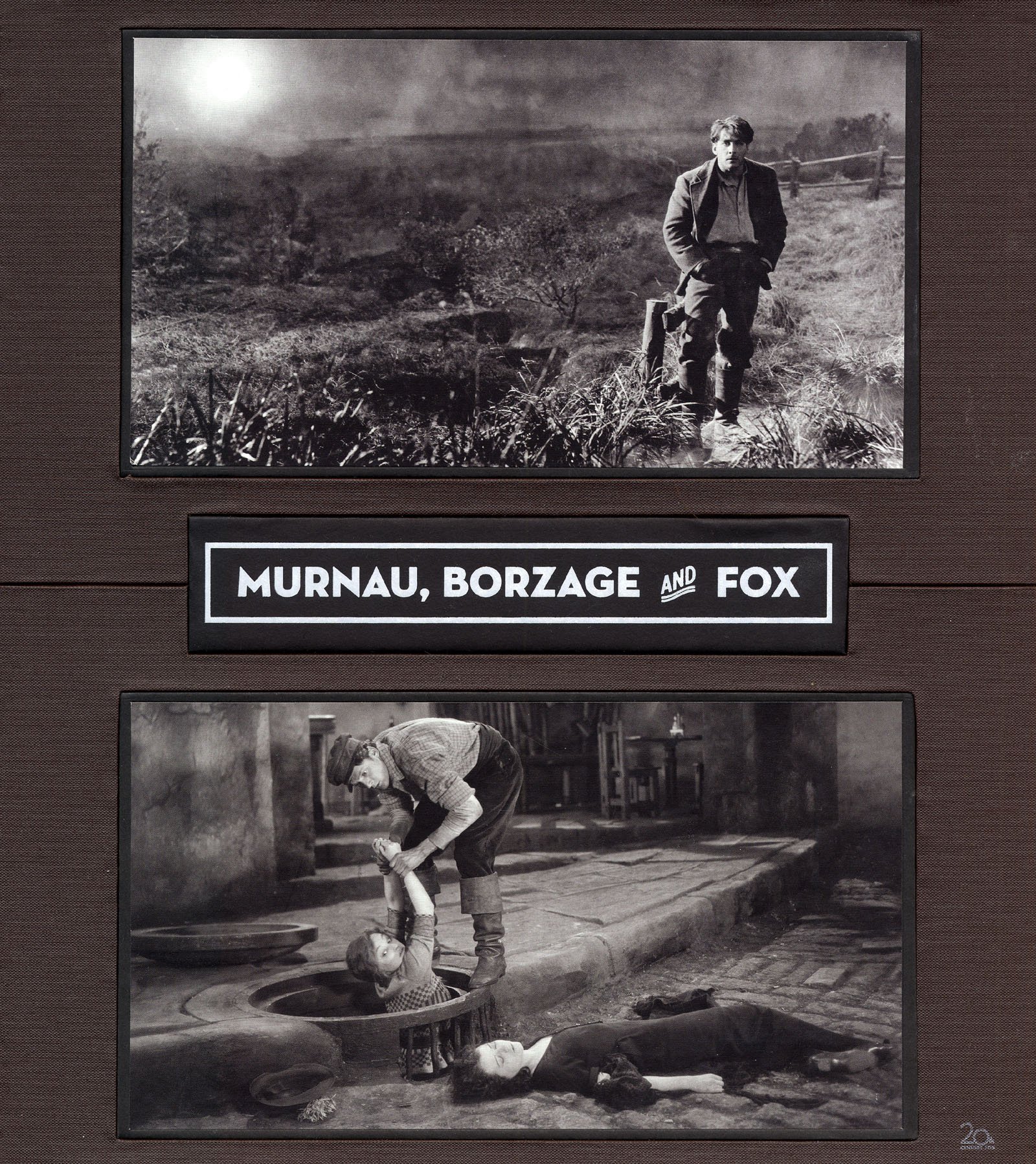 When I first read about this mammoth new DVD box set from Fox focusing on Frank Borzage and F.W. Murnau, I could barely believe it. (I have recurring dreams set in giant warehouse-like stores where all sorts of rarities are available for rental, and this seemed like one of them.) Last year, Fox gave the grand-DVD-box-set treatment to John Ford’s Fox films, and that was a bit more understandable; Ford is a name director with a filmography so capacious that it would keep a revival house running for a year or more. What was so surprising about that set, though, was its unapologetically scholarly basis. It laid out Ford’s body of work in context, so that we could see how some of his later famous movies grew out of under-screened early films like Just Pals and Up the River. Fox gave us Ford’s Young Mr. Lincoln in the set, but they also gave us Pilgrimage, a too-little-known early-’30s film that contains some of the most ambiguous work Ford ever did in his long life and career.

With the release of this new set, I can only hope that Frank Borzage’s time has come for radical reappraisal. In cinephile circles, his name has been invoked quite a lot lately as a kind of holy-grail director, just out of reach, and his reputation seems to have grown even in the time since I covered the eye-opening Borzage retrospective at Museum of the Moving Image. (For some exceptionally stimulating recent Borzage coverage, check out David Cairns’s blog Shadowplay.) As I kept reading about the set, I developed almost a physical lust for it, and that’s appropriate, for Murnau and Borzage directed some of the most erotic movies ever made. I had never really thought of them together, but the main booklet included here makes a striking case for what Borzage learned from Murnau, stylistically and perhaps even personally. The booklet also recovers William Fox as a rare studio boss who seemed to have an interest in film as an art; he gave carte blanche to Murnau for Sunrise, and this had a seismic effect on every director working at Fox, from Ford and Borzage to Howard Hawks and Raoul Walsh.

How do you write about Sunrise? It’s like trying to describe the smallest, treasured details of a romantic obsession; you breathe with this film, you let it work its miracles stealthily, slowly. The pictorial inventions and juxtapositions in Sunrise created a new movie language, and it has some of the most sensitive tracking shots of all time; that same sensitivity is also present in the first hour of Murnau’s compromised third movie for Fox, City Girl, where he films Charles Farrell’s open beauty and Mary Duncan’s tense, yearning face with a tender attention that must have influenced Borzage in his later developments of romance on film. Murnau sets up Farrell’s father as a stern, Germanic antagonist to his romance with Duncan, but at a certain point the narrative falls apart (Murnau walked off the set because of creative interference). What’s left is half a masterpiece, a case of coitus interruptus with the best late silent film foreplay imaginable.

In my MOMI piece, I covered Borzage’s great Janet Gaynor/Charles Farrell trilogy, and I can only say that, seeing them again here, Seventh Heaven is still one of the all-time classic romances, while Street Angel and Lucky Star both have their moments of transcendence, which should be experienced and savored as often as possible. The fragment of The River is still something to make Carl Dreyer swoon, but the real treasure here, silent Borzage-wise, is the melancholy and finally tragic Lazybones, which gives Ford regular Buck Jones probably the best part he ever had. Of the six Borzage talkies included in the set, I only reviewed Bad Girl for the MOMI piece, and it still seems to me an interesting but atypical Borzage movie, even if it won him his second Oscar for Best Director. What follows are short reviews of the other five Borzage sound films in this set, all of them rarely seen since their first release:

They Had to See Paris. This Will Rogers comedy, which marked Borzage’s talking-picture debut, is amiable enough for its first half hour or so, even if Rogers himself seems today like an unholy amalgamation of George W. Bush and a stoned Robin Williams. There’s a nice moment when Rogers looks at his wife (Irene Rich), who has dyed her hair and glammed up her formerly matronly appearance for their trip to Paris, and shyly kisses her, claiming that it feels like “infidelity,” but the French culture=easy virtue storyline gets laborious, and the film’s burlesque of sex goes against everything Borzage stands for in his best work.

Song o’ My Heart. A vehicle for the Irish tenor John McCormack, and a nearly unqualified dud. There are two versions of this bore o’ the set, one full sound, the other music-and-effects only, and though the music-and-effects version is slightly longer, it plays much, much better without all the dull dialogue. You can’t skip McCormack’s songs, alas; he’s not exactly Mr. Charisma, and Maureen O’Sullivan, in her first film, reads her lines like a robot in the sound version (though her prettiness works just fine for her in the mostly silent print). There’s a heartfelt “love transcending death and time” tableau toward the end, but it cannot make up for the rest of this interminable concert film.

Liliom. Based on a well-known Ferenc Molnar play, which was later made into the Rodgers and Hammerstein musical Carousel, this would seem to be ideal Borzage material; on first viewing, though, I’m not sure what to make of this stiff, bizarrely paced film, which must count as the chilliest Borzage love story. All of the actors recite their lines in such a slow, unnatural way that it begins to set a sort of sleepwalking effect; the whole film seems to take place in some alien, German Expressionist netherworld of its own, even before the story moves to heaven. Charles Farrell is miscast as the tough Liliom, and the stolid Rose Hobart sometimes resembles the bad Maria in Metropolis (her role was meant for Janet Gaynor, and surely it would be a warmer film if she had played in it). As it is, the later French Fritz Lang version of this material with Charles Boyer is far superior and even more romantic. It’s almost as if Borzage made the Lang-style version of Liliom and Lang made the Borzage-style version with Boyer.

After Tomorrow. Solid second-tier Borzage, only marred by a too-fast conclusion. It’s based on a play and mainly takes place in a few tenement rooms, but it never feels static (the slangy dialogue helps). Charles Farrell is paired with Marion Nixon here, and Borzage keeps them in soft focus during their love duets, the best of which is a wonderfully intimate tickling bout midway through, with Nixon ecstatically sprawled out on a couch as Farrell gives her pleasure with his long-fingered, poetically expressive hands. Josephine Hutchinson does a virtuoso turn as Farrell’s nightmare mother, and Borzage seems to be working through his mother issues with her; he fears her until he can see her as a human being, and then she becomes manageable. It’s like an exorcism of the dominating matriarch he sketched so disturbingly in his earlier Humoresque.

Young America. An early example of a socially conscious Borzage film, this tale of a good-hearted boy (Tommy Conlon) who’s considered a delinquent throws a lot of obstacles in the director’s path. The script is very poor, and the adult actors can be maddening; Ralph Bellamy is obnoxiously “relaxed” as a juvenile court judge, Beryl Mercer lays on the schmaltz a bit thick, even for her, as a good-hearted granny, and Doris Kenyon smirks her way through the role of a well-heeled woman who wants to help the boy. But Borzage overcomes these drawbacks when he concentrates on Conlon and his friendship with a bespectacled kid played by his own nephew, Raymond Borzage; their scenes together are a sort of dry run for what may be Borzage’s best film, No Greater Glory.

The big news in this area is City Girl, which looks absolutely crystal clear, an enormous improvement over my grainy Grapevine video copy from years ago. Sunrise and Lazybones also look good (a tip of the hat to Tim Curran for his perfect score for the latter). Seventh Heaven and the two other Gaynor/Farrell/Borzage films look pretty rough, unfortunately, but all of the talkies look and sound surprisingly good, though Young America is visually soft in places and has a low hiss on its soundtrack throughout.

The aforementioned booklet that goes with the set has lots of beautiful photos and lobby cards and a helpful text on William Fox and his dealings with his auteurs. The second booklet is a juicy recreation of Murnau’s lost Fox film 4 Devils, which looks like one long swoon; there are photos of a succulent actor named Charles Morton that show how Murnau’s eye for male beauty was second to none. (Several of the photos in the middle of the 4 Devils booklet are repeated, upside down, a pretty major blunder for a set like this, but forgivable.) There’s a fine commentary for Seventh Heaven by Robert Birchard and Anthony Slide, and a terrific Sunrise commentary by cinematographer John Bailey with outtakes from the film (both recycled from an earlier DVD release). Finally, there’s a thorough documentary “Murnau, Borzage and Fox” which features interviews with Borzage’s last wife Juanita, his insightful biographer, Herve Dumont, and theatrical grande dame Marian Seldes, who worked with Borzage on The Big Fisherman, his last film, and who tells a funny story about how his legendary sensitivity was not much in evidence when he directed her death scene.

Not to put too fine a point on it, but I want to have sex with the Murnau, Borzage and Fox DVD set.

Review: Nicolas Roeg’s The Man Who Fell to Earth on Criterion Blu-ray