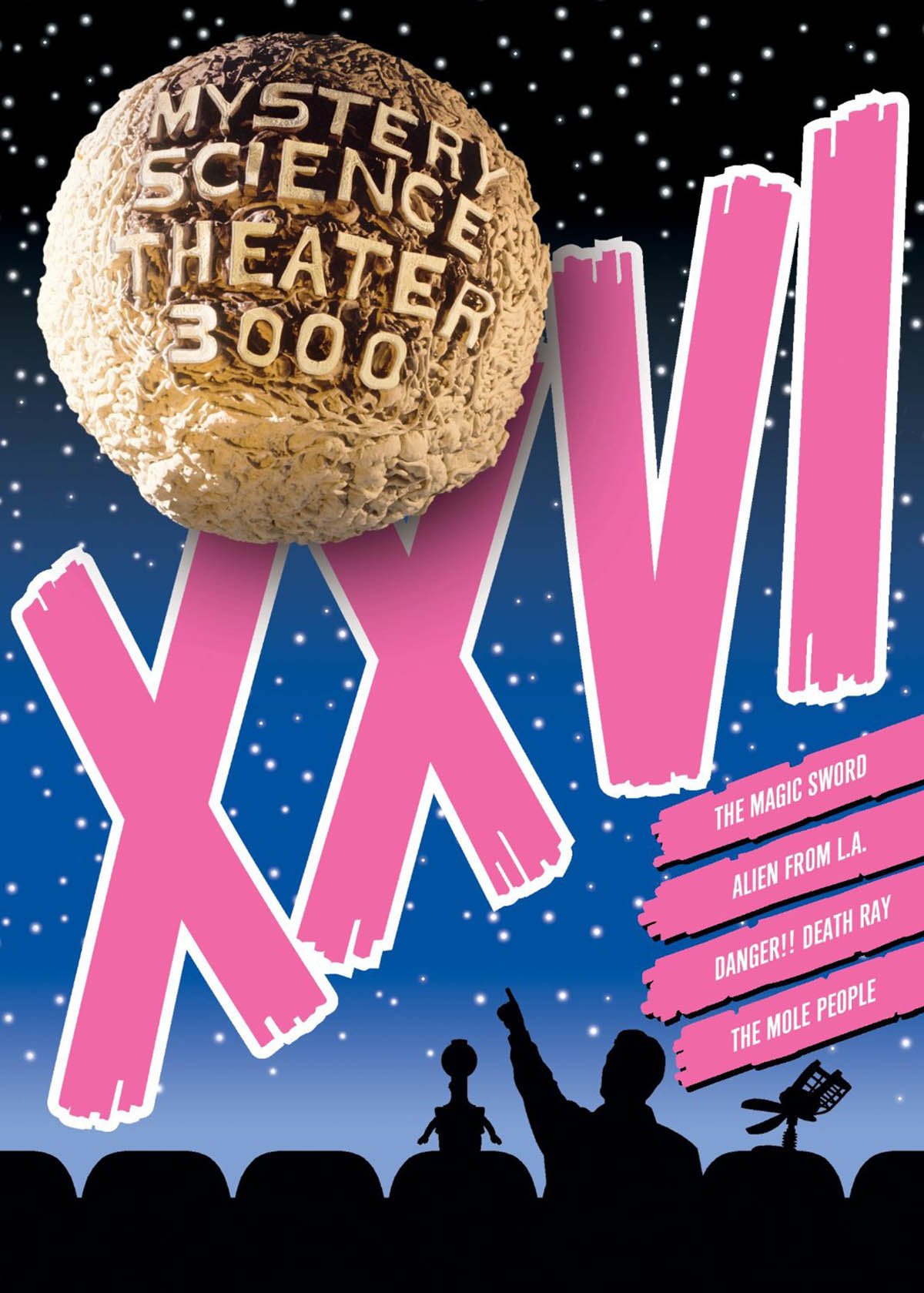 It should come as no surprise that many veterans of classic B cinema hold Mystery Science Theater 3000 in contempt, whether or not their own films were ever featured on the show (vocal dissenter Richard Gordon, producer of the incomparable Fiend Without a Face, comes readily to mind). All but the most cynical fans eventually come to similar conclusions: that more than handful of the nearly 200 films featured over the course of the show’s run were undeserving of the razzing they received, and like the savagery dealt out by similarly sardonic outlets (Mad magazine, South Park, etc.), the exuberance to mock or deconstruct often blurs the line between that which is simply bad and that which is easily ridiculed. To these eyes, two of the films included in this 26th collection of episodes—The Mole People and The Magic Sword—are such undeserving victims, both ultimately forgettable genre pieces, albeit ones instilled with admirable craftsmanship that might have benefited exponentially from greater budgetary resources. That the other two—Danger!! Death Ray (a generic Italian James Bond rip-off) and Alien from L.A. (a Jules Vernian trifle starring a grating Kathy Ireland)—deserve their respective scorchings doesn’t change that this is perhaps the weakest volume of episodes yet compiled, at least insofar as the riffing is concerned. Here, the talent of the MST3K cast and crew shows itself predominantly through the host segments and movie-break skits.

Perhaps, then, it isn’t entirely incidental that these episodes reinforce a larger theme of the series as a rumination on the act of seeing, a subtext that becomes literal through the repeated motif of the eyes. Crow T. Robot gets the lion’s share of this recurring trend, his trademark yellow ping-pong peepers suffering no shortage of ailments or modifications across the four episodes, my favorite being a fit of laughter so violent that they literally fly out of his head, but close behind is his attempt at hypnotic omniscience (“Does all-powerful have to mean over budget?”). The enigma that is Tom Servo’s clear chewing-gum machine head, of course, remains present throughout, but a bout of dress-up in which Tom dons the impoverished attire of a medieval serf and paints his otherwise transparent orb black further muddles the waters. Perhaps most notably is the rare involvement of Cambot, the camera that purportedly films the show during host segments, in the action, and whose tears, seen sliding down the screen from his first-person perspective, cap the climax of Danger!! Death Ray in which several dozen security cameras are blown to smithereens. The unrivaled gem of this set, however, stands alone, as host Mike Nelson impersonates a gesture-happy scientist from The Mole People to the derision of his robot sidekicks, a sublime acknowledgment by the creators of their own frayed ends of creativity.

For a show limited to cable-video quality, these transfers are about as good as they’re likely to ever get. The colorful sets (and sometimes less-than-colorful films) are nicely balanced, and there’s next to nothing to be found in the way of pixelation or combing. Sound is similarly acceptable: Dialogue is crisp and the music is consistently hum-worthy.

Bonus features are spread across all four discs. Included with each episode is the original theatrical trailer for the respective film. With The Magic Sword you’ll find a featurette with director Bert I. Gordon (best known for his Colossal Man films), who discusses his early relationship with cinema and how his career started at the age of nine. On Danger!! Death Ray is another in the “Life After MST3K” interviews, this time with mainstay Mike Nelson. Alien from L.A. includes an interview with director Albert Pyun, who doesn’t mind sharing his reservations about the final product. Perhaps most interesting is “Of Mushrooms and Madmen: Making The Mole People,” a short but informative look at the production of ‘50s genre films, contractual casting, and the rise of reliance on stock footage.

An unusually tepid collection of episodes, but one not without riches if you’re willing to dig beneath the surface…down, down…

Review: Hong Sang-soo’s In Another Country on Kino Lorber DVD