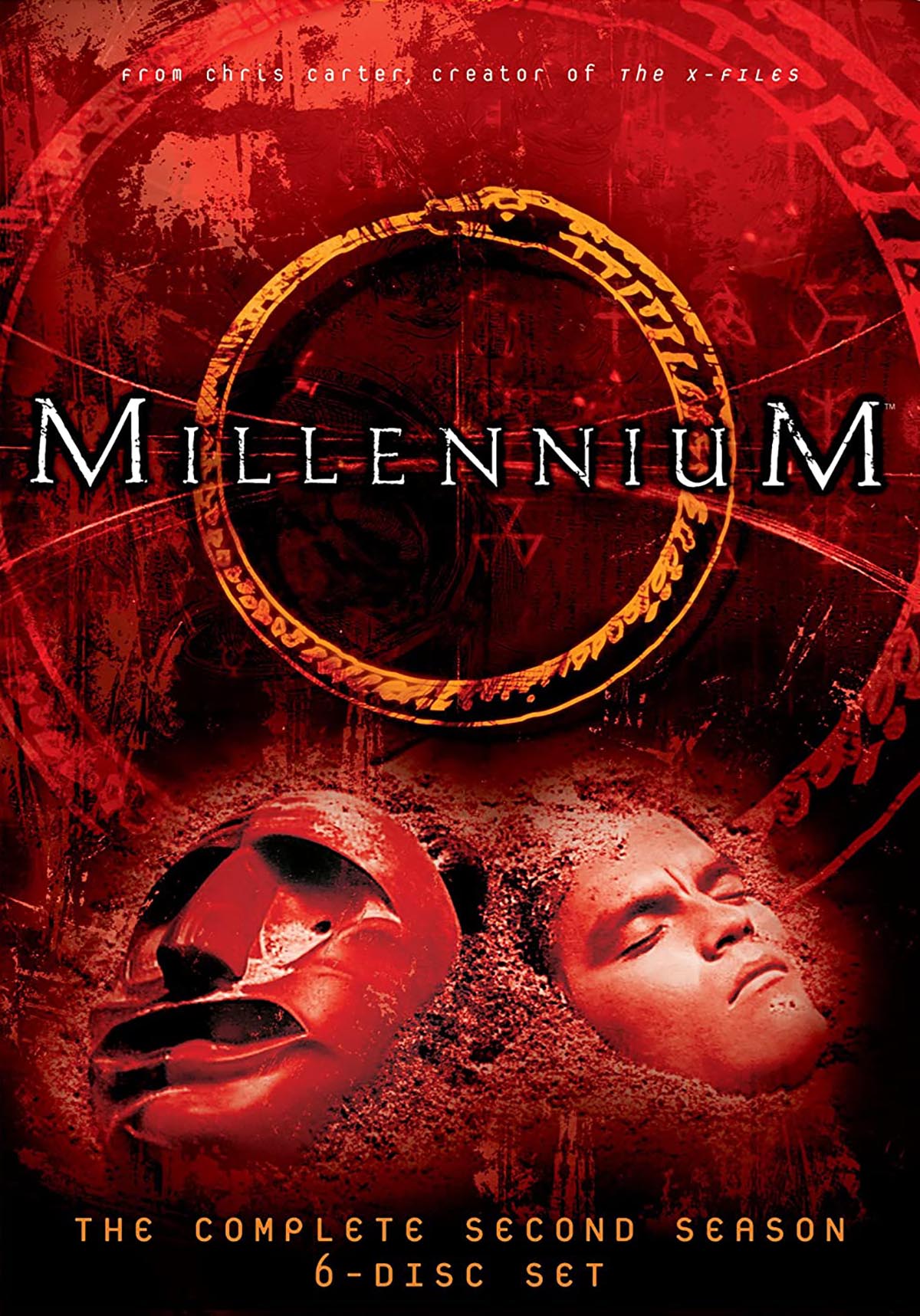 Season two of the Chris Carter-created series Millennium is grounded in both on- and off-screen conflict, the more dramatic of these battles assuming the narrative form of a headlong 23-episode rush toward the shattering personal apocalypse of the show’s potentially psychic protagonist Frank Black (Lance Henriksen). Elsewhere, a subtler battle is waged between Carter (the skeptic philosopher solo act) and second season show-runners Glen Morgan and James Wong (the spirited fantasist tag team). Some brief history: His attentions diverted by the fifth season and soon-to-be-released film version of sister series The X-Files, Carter handed Millennium’s reigns over to frequent collaborators Morgan and Wong. It was an inspired choice that led to, arguably, the finest episodic run ever produced under Carter’s Ten-Thirteen Productions banner, though the season’s still-evident greatness pales somewhat in light of Morgan and Wong’s subsequent movie output, a string of worthless horror and fantasy vehicles (Final Destination, The One, Willard, and—apparently upcoming—Final Destination 3!) that possess little of the depth and intelligence of their television work. Their current career degradation has a historical basis: Look back at the duo’s weak 1995 sci-fi series Space: Above and Beyond and it becomes evident that Morgan and Wong’s best creative efforts were always contained within a Carter framework.

In spite of Carter’s absence from season two’s writing roster, his viewpoint and vision are always apparent, and it clashes with Morgan and Wong’s reinvention of the Millennium Group from a criminal consulting firm to an ancient, protective sect who guide the world through the turbulent times leading up to the year 2000. Morgan and Wong’s mystical mumbo-jumbo (engrossing and engaging in the moment) is at odds with Carter’s present-tense form of storytelling—his narrative metier is a more sober and earthbound exploration of the working classes and the repetitious, but essential, grunt labor that defines their existence. Put simply, Carter’s characters are in love with their jobs, often at the expense of any and all traditional societal attachments (family, friends, etc.)

With his furrowed, skin-tightened skull of a face, Lance Henriksen is the perfect actorly complement to Carter’s thematic obsessions, his Frank Black the mortal survivalist pushing ever-forward, even in the face of the devil’s idle temptations. Morgan and Wong’s numinous plottings only strengthen Frank’s resolve—he’s the Carter agnostic in perpetual conflict with a fatalistically preordained narrative arc where every story element, every character, has its perfect endpoint. Even the late, lamented Bobby Darin fits into Morgan and Wong’s storytelling model, his music acting as background commentary for the first third of the season before a sublime sendoff-via-monologue in the 10th episode “Goodbye Charlie.”

Such attention to the smallest narrative detail points to the immediate strengths and long-term weaknesses of Morgan and Wong’s single Millennium season. No doubt more consistent and organic when compared to Carter’s schematic, make-it-up-as-you-go-along approach to storytelling, there’s nonetheless a hermetic and sealed-off feel to the second season, as if it’s a near-perfectly polished jewel that makes every effort to bend the light and hide its flaws. Chalk it up to the curse of time: Now that our own millennium has come and gone with no worldwide, all-encompassing apocalyptic incident, Morgan and Wong’s narrative contrivances feel unfortunately dated, and their overall story arc, while still compulsively watchable, now stands revealed as little more than breathless, Zeitgeist-happy pulp fiction.

No doubt the best a Ten-Thirteen series has ever looked, Millennium: The Complete Second Season comes to us on six dual-layer discs in 1.78:1 anamorphic widescreen. There’s a vivid Technicolor palette to this season, which acts as a middle-ground bridge between season one’s chiaroscuro darkness and the third season’s bleached-out grayness. Remember that botched widescreen transfer of the episode “Triangle” on The X-Files: The Complete Sixth Season? No such thing here, though there is a humorous split-second mistake on the season’s greatest episode, “A Room With No View,” where recycled establishing-shot footage from Millennium’s first season appears as a full-frame windowboxed image. (Rupert Murdoch takes his devilish revenge?) The set offers a choice of three audio tracks: English, Spanish, or French Dolby Surround with optional English closed captioning or Spanish subtitles.

Two excellent commentary tracks grace this set, the first by director Thomas J. Wright on “The Hand of Saint Sebastian,” the second by writer Michael R. Perry on The Mikado. Wright, in particular, has some interesting things to say about the season’s narrative twists and turns, thinking them at first inspired and later kind of silly. The documentary “Turn of the Tide: Making of Season Two” rises above the standard puff piece because of its seething, bitter emotional undercurrent. Morgan and Wong declined to participate in this video remembrance; clearly there’s some unaddressed hostility that, like the proverbial, omnipresent elephant, the interviewees attempt to skirt around with measured, soft-spoken verbiage. Another documentary, “Academy Group: Victimology,” focuses on the law-enforcement group that was Carter’s original inspiration for Millennium-this feature, more than anything, is revelatory of Carter’s “the-work-is-all” thematic interests.

DVD Review: James Toback’s When Will I Be Loved onMGM Home Entertainment