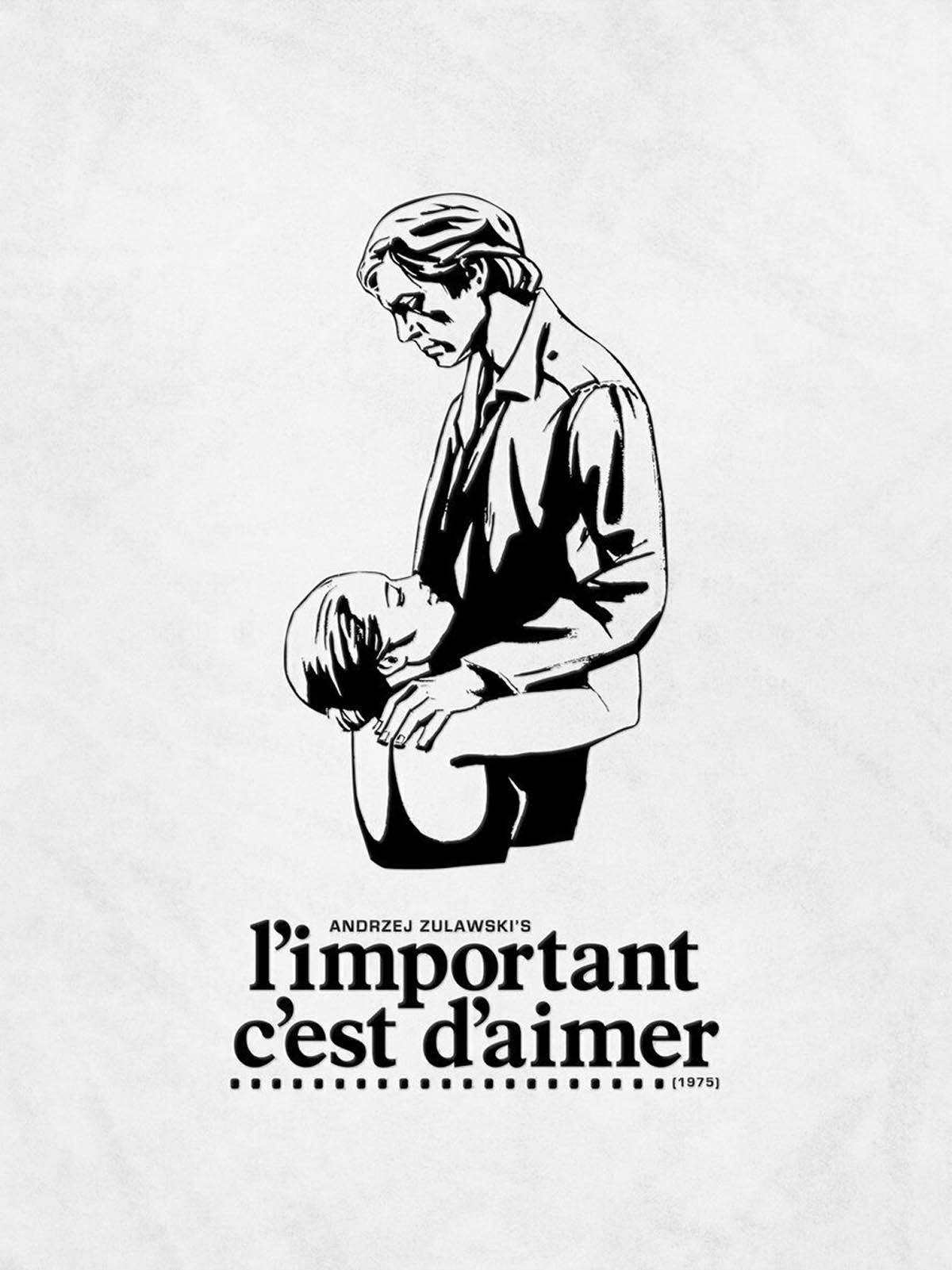 Love, to Andrzej Zulawski, is a tumultuous struggle to satisfy one’s misplaced desire, a self-destructive march into the abyss in order to free those trapped by that desire. This love in the Polish director’s films is epic in scale, as his characters are prone to throwing themselves wholeheartedly into their doomed romantic mission. This isn’t the realm of sentimentality, because love here is violent and obsessive and all-encompassing.

L’Important C’est D’aimer’s love triangle between a brooding photographer, Servais Mont (Fabio Testi), a struggling actress, Nadine Chevalier (Romy Schneider), and her ridiculous, cheerfully self-loathing husband, Jacques Chevalier (Jacques Dutronc), is set within an absurd world of low-level gangsters, sleazy porn merchants, suicidal clowns, and theater queens. And in a casting coup that fits perfectly within the milieu, madman Klaus Kinski stars as a debonair thespian, Karl-Heinz Zimmer, raging his way through the on-stage role of Richard III, though this mercurial actor’s most explosive moment happens off stage in his response to a negative press review. He picks a fistfight with two smarmy bourgeois onlookers before absconding with their tart girlfriends for the night. “You’re crazy,” someone tells him a few scenes later, to which Karl-Heinz delightfully responds, “No, I’m rich!”

Zulawski’s handheld camera stalks the film’s characters, lurching alongside them through Parisian apartments lined with bookshelves and into restaurants where glasses of wine and cups of coffee seem destined to be thrown at the nearest person or surface. This may sound like an over-the-top Euro-art psychodrama, but it’s quite restrained by Zulawski’s standards. Most of the time, his characters aren’t verbally and physically laying siege on one another—as they do for the entire running time of the anarchic 1972 period film The Devil and the 1981 horror film Possession. They’re accompanied by a lush orchestral score by Georges Delereu, who also composed the themes for Jean-Luc Godard’s Contempt. Close-ups abound of the central characters in moments of luminous stillness, such as an early moment of soul-encroaching vulnerability where Nadine, lying on the floor ready to shoot a scene in a softcore porn, whispers to Servais, “No photographs please.”

Nadine is given the opportunity to act as Lady Anne opposite Karl-Heinz, and when her nerves get the best of her and she flees from the theater, she’s pursued by the man. As he comforts her with a gentle kiss, he not only compliments her beauty but, in a poetic gesture, states that he would give anything to resemble her instead of being cursed with his own ugly, freakish form. And when Servais shows up to also provide comfort to the woman for whom he’s fallen head over heels, Karl-Heinz contemptuously dismisses him with an indifferent flick of his hand, as if the vulnerability that the actor allowed himself to express has given him license to own Nadine.

Schneider, who embodies the very heart of L’Important C’est D’aimer, may deliver a performance that tops even Isabelle Adjani’s wide-eyed, operatically voluptuous turn in Possession. She startles for the way she conveys something buried death and twisted inside Nadine. Hers is a fearless performance not because she gets naked, in the figurative sense (the nudity is, in fact, quite chaste), but because she allows herself to be so vulnerable. Throughout, it’s as if we can see all of Nadine’s nerve endings, along with the dignity it takes for a cracked-up woman to work through her mania.

The spectacular looking digitally restored transfer of the film is rich in color and detail, and the soundscape beautifully preserves the score by Georges Delerue, balancing it nicely with the dialogue. The film looks and sounds stunning, as if it were made yesterday.

Andrzej Zulawski’s audio commentary with film writer Daniel Bird as moderator is both informative and darkly comic-as the Polish director defends the concept of suicide as a heroic choice, happily quotes Dustin Hoffman’s line “This is nothing!” from Wag the Dog during a scene where the hero takes a bloody beating, and asks his British colleague if there’s any difference between photographing an orgy or shooting the queen (“I won’t answer that,” is Bird’s wry response). But he also describes how he arrived in France from Poland after his films were banned, his struggles with the producers to secure Klaus Kinski’s participation in the film (after Kinski had punched one of them in the face and called him a Nazi!), and his dismay at having to cut out two of his favorite scenes, which he vividly describes. A 15-minute interview with Zulawski describes his adaptation of a richly philosophical novel to the screen, how the film acquired its title, and brief anecdotes about his work with the actors, particularly Schneider, who was nervous about playing a role her own age after she hit 30. Rounding out the special features are several stills and behind-the-scenes photographs, a theatrical trailer, and a 24-page essay by Bird that delves into Zulawski’s student years in France studying filmmaking, philosophy, and political science, as well as his post-Poland years as an uncredited script doctor on French movies. There’s also a vivid and unpretentious analysis of the film, in which Bird says, “All may be fair in love and war, but here love is filmed as was, with the camera chasing emotionally battered lovers as if it were the D-Day landings.”

The second Zulawski film put out by Mondo Video maintains their impeccable standards of quality, and it’s great to see this underappreciated international auteur receive such a handsome DVD package for one of his finest films.

DVD Review: Al Reinert’s For All Mankind on the Criterion Collection