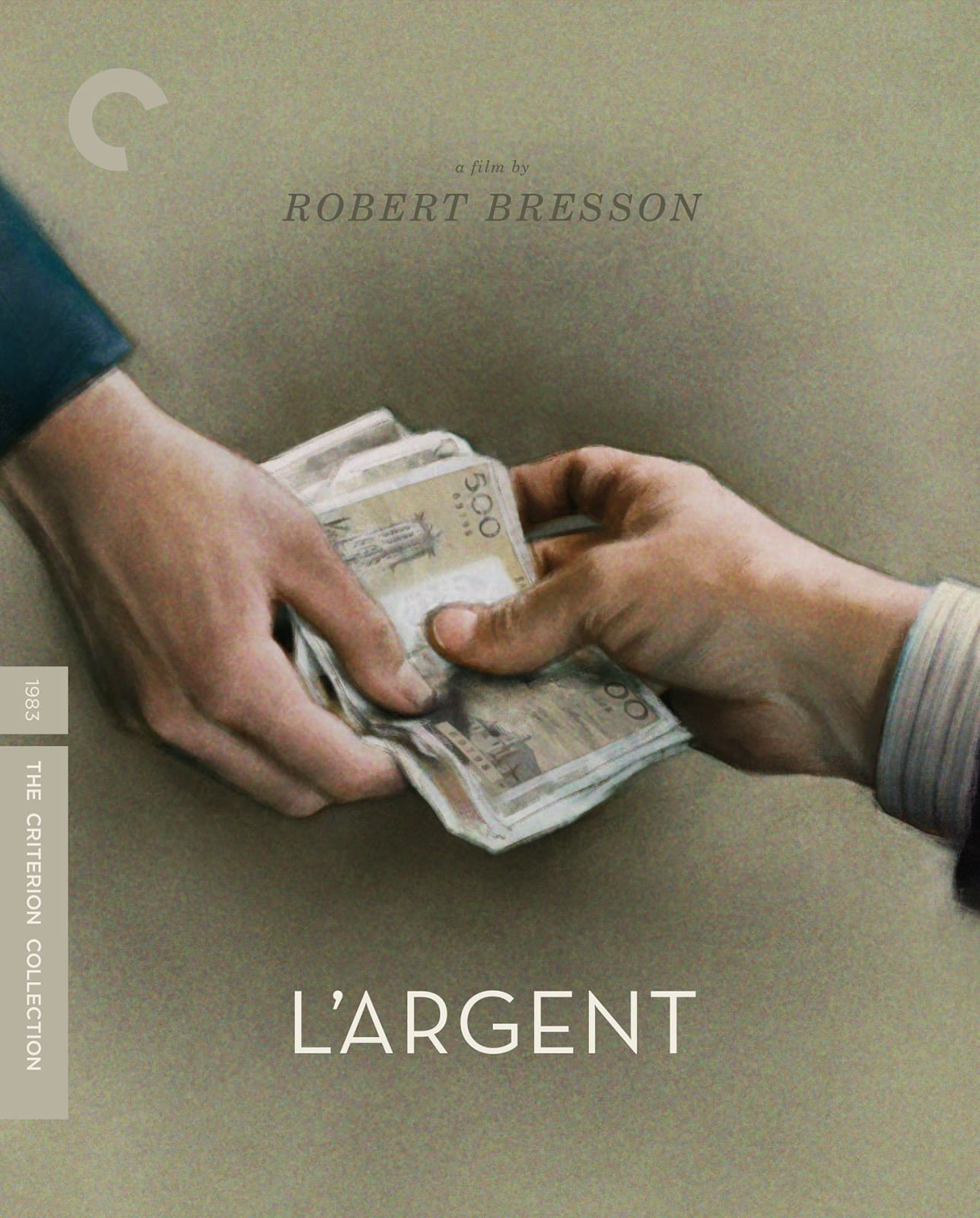 A director with as supple a foundation of cinephilic adoration as Robert Bresson is bound to inspire a lot of Olympian proselytizing—among auteurist converts and heretics alike—about the galactic elemental clarity of his work, spiked with as many buzzwords as possible such as “unforced,” “simple,” “open-ended,” “spiritual,” “philosophical,” “earthy,” “humane.” It’s almost to the point that reading about Bresson you’d imagine that his films are composed of shots of nothing but koi ponds, cala lilies, creamy, hemp-textured canvases, loaves of bread, or whatever else has become shorthand for cinematic transubstantiation. Which is why L’Argent, which is admittedly unforced, open-ended, and humane (and, to throw in one further Bresson cliché to boot, excises any trace of narrative fat and works it to the bone), hits with the effect not so much reflecting a cleansing of the soul, but rather a ransacking.

Based on a Leo Tolstoy novella, the story feeds the notion of fate through a stringent, Rube Goldbergian social machinery that results in the destruction of a fuel truck driver’s livelihood and sanity (or does he actually gain some strange new clarity?) preceding a series of homicides. And it all seems to stem from the innocuous chicanery of two schoolboys and their forged Franc note that the employees of a camera shop try to pass off on the driver, named Yvon Targe (Christian Patey), who later gets nailed by a coffee shop’s waiter. With the same sort of amplification of violence and respect for the laws of chance that brings to mind Shirley Jackson’s “The Lottery,” L’Argent is like Henry: Portrait of a Serial Killer recited in iambic pentameter.

Bresson might be working with a disorienting focus on chosen details, but his narrative momentum and editing rhythms are fleet, never giving any of the characters any time to contemplate an alternate course of action that might alleviate their melancholy. The only character that exhibits the capability to anticipate the flow of circumstances—at least, as my editor points out, up until the film’s justly celebrated penultimate countryside sequence, when “motivation” becomes unnecessary and impure—is Lucien (Vincent Risterucci), the fey, altruistic criminal and camera shop cashier whose lies on the stand in court are what initiate Yvon’s descent. Lucien’s motivations always align with what will end up benefiting him the most at that particular moment in time. In that sense, he’s the diametric opposite of Yvon, the scapegoat of the cosmos. Lucian’s actions seem a mass of moral relativism against Yvon’s clarity. But his self-interest is more overtly formally driven home by how often Bresson’s characters are shown in isolation from one another.

Which brings Yvon to L’Argent’s finale, in which the film seems to posit his massacring of a farmhouse family under similarly relativistic terms. It’s a horrible act, no doubt, but at the same time he’s mercy-killing in nearly every case—a duty-bound housewife, an old drunk ex-pianist, a crippled child—and his return to the jailhouse institution that “reformed” him ostensibly means more refining down the line. Throughout, Bresson’s framing and editing are both razor-sharp and oblique. The actual murders remain off screen, with ellipsis and insert shots of an alarmed family dog paralleling how the depictions of Yvon shoving the coffee shop employee and the country husband slapping his wife’s face dance around any actual on-screen violence. The horrific act becomes such a vivid example of “pure cinema” that we half expect the gathered onlookers of the film’s final “open-ended” shot are paying respect to the aesthetic beauty of Yvon’s crime as they are rubbernecking a police arrest. Ultimately, L’Argent manages to convey coherence between rigid moral dogma and sympathetic multiplicity. It’s mind-blowing.

Finally reaching the North American HD video market in a transfer that doesn’t bear the scars of a PAL-to-NTSC transfer, L’Argent looks and sounds flawless. Or at least somewhere in the remote vicinity. Okay, the color scheme is a bit jaundiced and muted, but all indications are that that’s an accurate representation of the film elements themselves. (After all, what is L’Argent if not a ruthlessly jaundiced masterpiece?) Otherwise, the image is as sharp as the film’s editing, and there’s very little variance throughout within the overall appearance. The sound is monaural, which again is faithful, if not likely to send audiophiles lunging for the set as a must-purchase. That’s their loss, though, as Criterion’s disc preserves with exacting fidelity the overwhelmingly sensual textures of a Bressonian soundtrack. So if it loses the audiophiles, the disc should attract the attention of ASMR fiends.

Admittedly, I was on the record in hoping for more from critic Kent Jones’s commentary track on the New Yorker DVD release. But something is better than nothing, and Criterion opted for the latter when it comes to commentary tracks for this release. They did, however, secure the participation (active or posthumous) of a collection of other, equally tony critics. First off, James Quandt—the man whose year-end lists in Artform never fail to make most feel as though they’ve been spending the entire film year under a rock—loosens up, by his standards, with a 50-minute A-to-Z exploration of Bresson’s style as it pertains to L’Argent. The intention is similar to Jones’s perception that Bresson’s last film was also, in many ways, his apotheosis. It’s lofty, to be sure, with 26 alphabetic stops on topics like “Jansenism” and “Uccello,” but at least it retains enough of a sense of humor that when he gets to “X,” his chosen chapter heading is “The Ax,” before he predictably winds up on “Zarathustra.” Equally lofty is the essay by Adrian Martin in a chunky booklet also featuring a 1983 conversation between Bresson and our third very serious critic, Michel Ciment. (One hopes that booklets are once again becoming the rule with Criterion releases, and not the exception.) Of course, no one has the right to be quite as grandiose as Bresson himself, and he’s on full display in a half-hour excerpt of press coverage footage from the 1983 Cannes Film Festival. It is, needless to say, required viewing.

L’Argent stands alongside Gertrud, Eyes Wide Shut, and Imitation of Life among directors’ final films that are also arguably their finest.