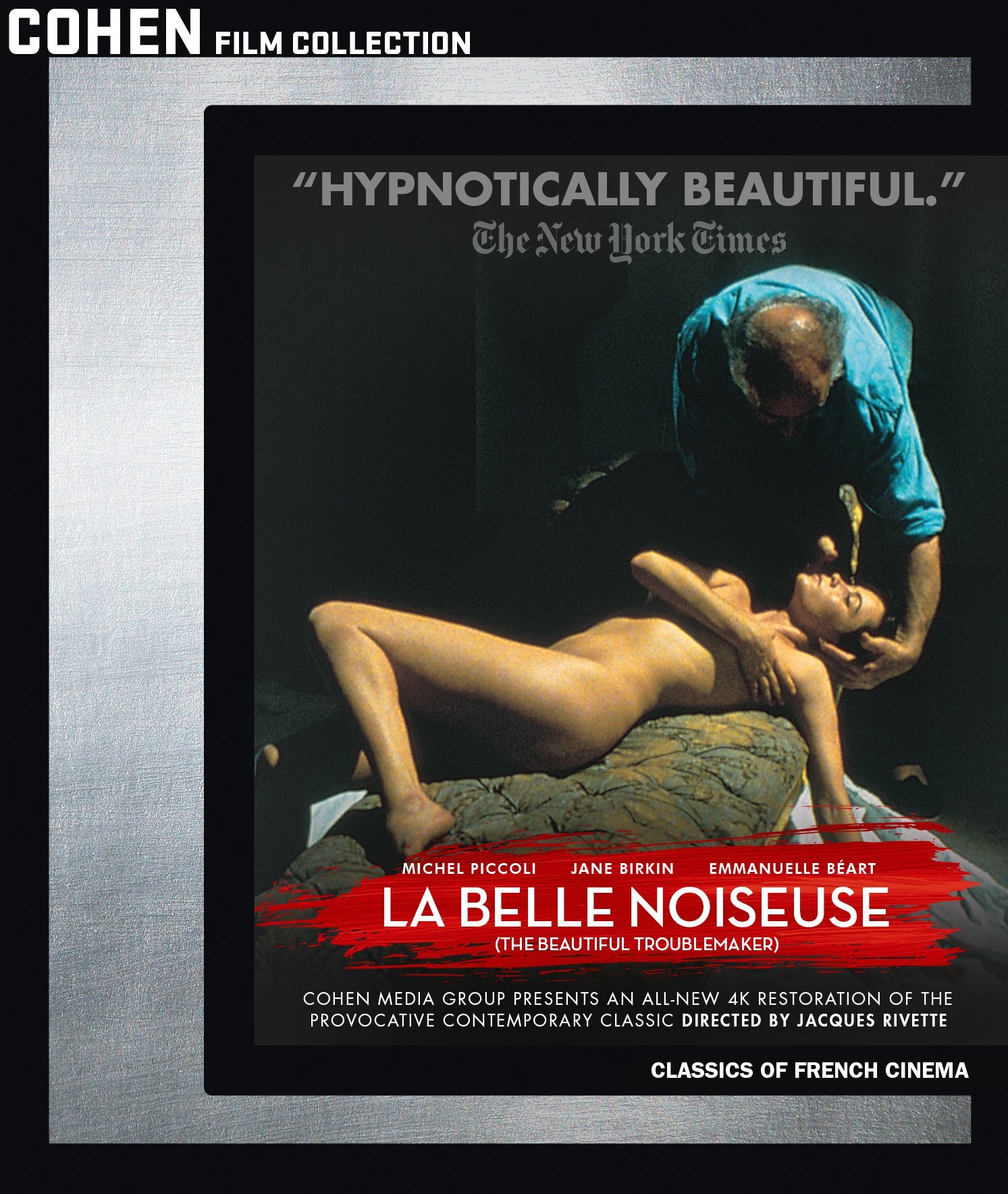 Like most of Jacques Rivette’s features, La Belle Noiseuse initially evinces a placidly realistic tenor. A young couple, painter Nicolas (David Bursztein) and his girlfriend, Marianne (Emmanuelle Béart), head to Provence for a meeting with one of Nicolas’s idols, Édouard Frenhofer (Michel Piccoli). The atmosphere is warm and breezy early on, but when the couple arrives at the artist’s chateau, pleasantries give way to a sense of nervous social obligation. Frenhofer’s wife, Liz (Jane Birkin), shows the couple around the place in the absence of her husband, who’s clearly avoiding his guests. When Édouard finally makes an appearance, his reluctance is palpable, showing Nicolas and Marianne around the place with all the enthusiasm of an off-duty museum guide. The painter brings them to his vast studio, admitting that this is the first time he’s been there in years, and the reminder of his artistic stasis makes him prickly toward Nicolas and his hero worship.

Édouard does take an interest in Marianne, however, though not in a particularly lustful way. She awakens his creative drive, and the painter soon suggests to Nicolas that she pose for him. The wannabe protégé agrees, albeit reluctantly, and after a brief fight with her boyfriend about him speaking on her behalf, Marianne reports to Édouard’s studio to pose nude for his sketches. Much of the rest of the film concerns the artist and his model’s sessions, which unfold at such an agonizingly lugubrious pace as to feel that we’re witnessing them in real time. Édouard makes sketches by dipping a pen in an inkwell and scratching a few lines before repeating the process. Frequently, he scraps a piece of paper before his drawing even takes shape, and even the pages he finishes look so abstract and nondescript that one wonders what, exactly, makes Marianne so special to him.

Rivette’s use of long takes gives his actors the freedom to modulate their interactions, capturing the incremental steps by which people become more familiar with each other and give themselves over to more bold actions. Initial scenes in Édouard’s studio see the painter grabbing Marianne and moving various parts of her body, positioning her to his liking and barely saying a word to her. All the while, close-ups show Marianne trembling from a combination of embarrassment and exhaustion. Subsequent sessions find Édouard acting more audacious around his new muse, placing her in increasingly elaborate, unnatural, and painful poses until she finally begins to push back against his manipulations, breaking form in order to cajole him or grab cigarettes. Yet it’s in Marianne’s resistance, not her compliance, that Édouard seems to get the most inspiration, and the primitive, aborted sketches from their first session gradually blossom into detailed, captivating works in progress as he builds toward his intended masterpiece.

The film’s title, also the name of Édouard’s unrealized painting, translates to “the beautiful troublemaker,” and Marianne’s willingness to confront the painter finds her slipping more and more into that role. This has the effect of gradually eroding the distinction between the creation of the painting and what it represents, and the studio scenes correspondingly progress from the naturalistic to the impressionistic, with Marianne lit luminously against grayscale backgrounds that collapse the distance between the real woman and Édouard’s ink sketches. That fusion of subject and form eventually expands to include the artist himself, most visibly in a scene where both Édouard and Marianne break down into an extended giggling fit that undermines the tacit power of artists over their models by placing them on literally even ground as they roll around in laughter. It’s a direct, cathartic illustration of the film’s deconstruction of accepted artist and muse roles, and as affirming in its unexpected comedy as the film’s warm coda.

The sunny and verdant hues of the Provencal countryside pop throughout the film’s exterior scenes, while many of dimly lit interiors are rendered with no noticeable crushing. Close-ups reveal natural flesh textures and even grain distribution. There are no signs of either print damage or overly smooth digital cleanup. The LPCM audio track is also strong, reflecting Jacques Rivette’s aggressive mixing of Foley effects. Ambient noise dominates the soundtrack, with sounds like the buzzing of insects and the incessant scratching of Édouard’s sketch pen on paper cranked up to nearly deafening levels so as to emphasize the long stretches of silence between characters. Dialogue is, however, consistently clear and never drowned out by the din.

An audio commentary by film historian Richard Suchenski offers numerous insights into La Belle Noiseuse. Suchenski takes particular pains to point out the way that Jacques Rivette’s ostensibly realist techniques—namely, his use of long takes and naturalistic lighting—are gradually made surreal by painterly color schemes and almost Brechtian acting techniques. Suchenski draws from a wide pool of references, including German Romanticism and the theories promulgated in Rivette’s own criticism for Cahiers du Cinéma.

An archival interview with the filmmaker contains copious information regarding La Belle Noiseuse’s conception—including the tidbit that the film’s premise started as a joke—and production details such as how painter Bernard Dufour was recruited to do the film’s sketches. Rivette touches upon his filmmaking method of using longer takes to leave room for the actors to change up a scene’s tone, and he even delineates some differences in the material used to assemble the film’s shorter alternate cut, Divertimento. Another interview, with co-writers Pascal Bonitzer and Christine Laurent, offers a more thematic discussion of the film and its characters.

Review: Aki Kaurismäki’s The Other Side of Hope on Criterion Blu-ray