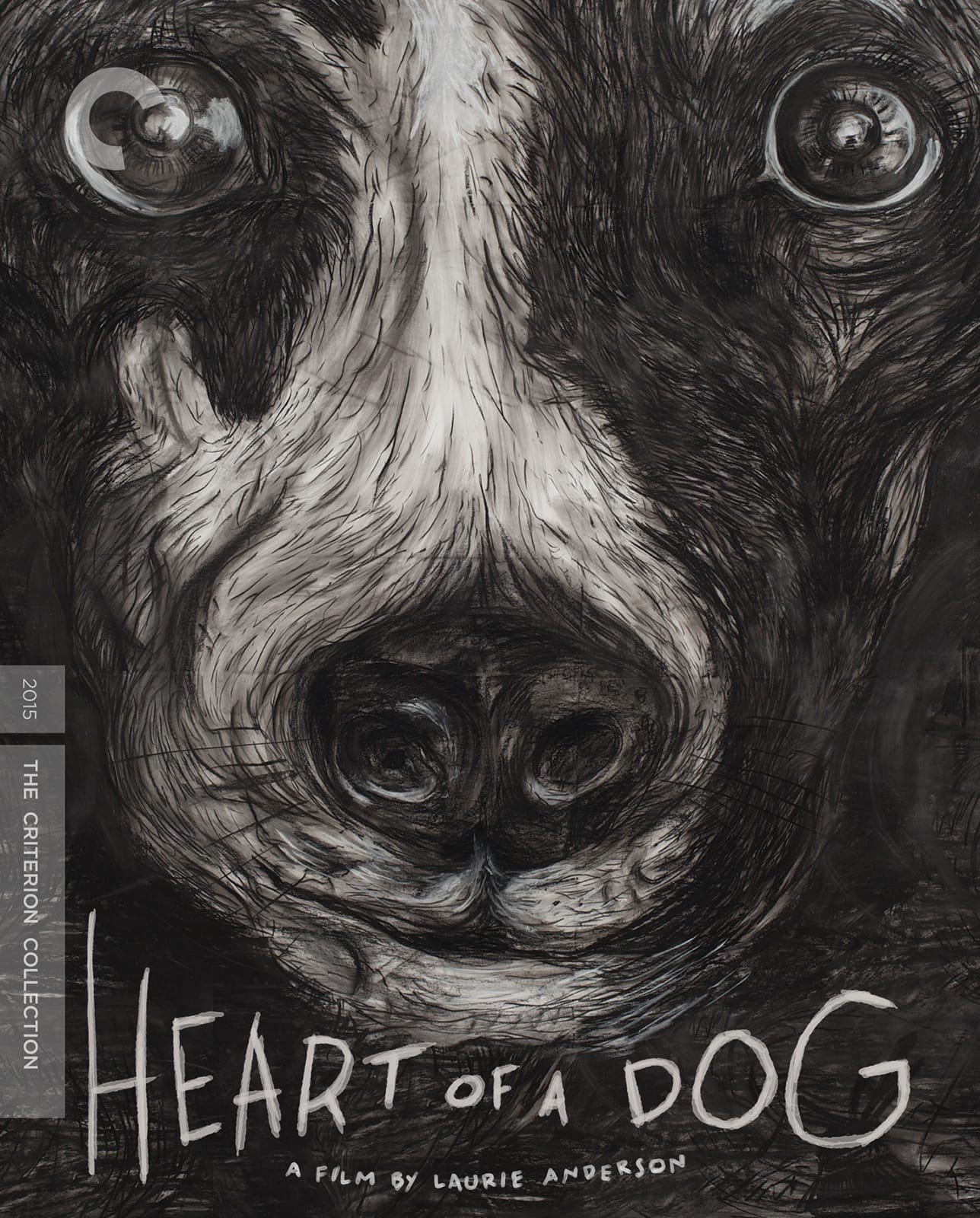 The great film philosopher Stanley Cavell once said, in relation to Red Desert, that Michelangelo Antonioni had found a way to suggest “the world we inhabit is already the world of the future.” The Italian auteur did this, Cavell says, through the use of color as a “declared condition of [the] medium” in order to reach a deeper truth about the tangible world. Laurie Anderson’s Heart of a Dog continues Antonioni’s pursuit of immediate futurity, but does so through the form of an experimental documentary that is as equally solipsistic as it is aesthetically profound.

Yet Anderson’s navel-gazing isn’t of the self-absorbed sort. Rather, she blends personal and public histories to create a palimpsest upon which the capturing of singular, immediate emotion exists beside reflective, historical assessments. Such passages are often staggering in their breadth of insight. Voiceover drives Heart of a Dog, but Anderson’s unsettling audio-visual design gives the film its primary identity as a cine-poem on love and loss.

Early on, Anderson recounts walking in California with Lolabell, her rat terrier, in an attempt to teach the pet a few new tricks. Suddenly, Lolabell is made aware of a hawk, which unsuccessfully swoops down to snatch her for food. The dog realizes, Anderson says, its status as prey and, even more disturbing, that predators can come from the air—a point she unites with the expressions of American faces right after 9/11, as they came to similar realizations. Anderson reconstructs their walk with distorted images from along the countryside, which function more as snapshots of her memory than a fully articulated account. As such, the film denies linear logic as a means to comprehending an existential state. Furthermore, Anderson pitches these explanations not as political talking points, but philosophical auto-critique, where arguments regarding socio-cultural anxieties are built within the film’s architecture instead of being products of it.

The strength of the film’s form lies in its capacity to shift affective registers without warning. When Anderson’s uses a quote from the philosopher Wittgenstein, it follows a discussion of Homeland Security’s slogans in the wake of 9/11 regarding airport procedure. These connections are unified by Anderson’s proclamation that the slogans “sound like something Wittgenstein might say,” solidifying the film’s primary interest in contingency as an aesthetic condition. Since Anderson forgoes the use of talking heads or experts of any sort, the film is free to rearrange into either a lighter of more foreboding version of its previous self.

Such an open range makes Heart of a Dog truly horrifying, since it’s not restricted by formal demands. Thus, when Anderson begins likening apocalyptic speculations made by various religious groups to dreams, the film unexpectedly turns to a discussion of sudden infant death syndrome and Anderson’s own childhood traumas, including a time when she broke her back and spent an extended period of time in a child care unit. But this is “a story about a story,” as Anderson terms it, which ultimately boils down to the nature of storytelling and a human need to narrativze everything. Anderson, at the film’s most chilling point, reaches the conclusion that the “creepiest thing about stories…[is that] you get your story, and you hold onto it, and every time you tell it, your forget it.”

And that—the fragile line between remembrance and forgetfulness—is something of the film’s cumulative effect. Instead of explaining life through the tale of a beloved animal, Anderson condenses contemporary, human experience to the point where exterior and interior are made indistinguishable from one another. Narrative, as a maker of meaning, is less structured and ordered than felt. Whether detailing the life of a friend whose ghost Anderson claims to have seen at a later date or explaining her need to reconcile with her dead mother, the film remains tightly wound by its interest in navigating responses to trauma and the ways rational knowledge must anchor spiritual belief—not the other way around. The great theorist Roland Barthes reminds us that “knowledge, like delight, dies with each body.” With Heart of a Dog, Anderson yearns for a physiological reality that would allow all beings to wear their hearts on their sleeve.

This transfer has been produced with an eye and ear that are wonderfully attuned to Heart of a Dog’s bracing tactility of form. Nearly every kind of image appears in Laurie Anderson’s film, from grainy footage to digital footage to animation to everything in between, as well as seemingly every possible combination of multiple forms layered simultaneously within singular compositions. The image has been produced with stark, lucid clarity that’s rich in detail without appearing artificially “cleaned up”—unless that distancing effect is purposefully courted by Anderson to call into question the subjectivity of our reality, which she insists to be composed of stories so tightly wound together as to form a fragile DNA of consciousness. Blacks and whites boast a deep razor sharpness, particularly a shot of Anderson’s family in a snowscape that serves as the film’s master image. Grit, both real and simulated, is quietly evocative. Facial textures in the stock footage, especially of Anderson’s dog, Lollabelle, are heartbreakingly palpable, while the animation is creamy in its smoothness. There are two soundtracks, one which allows you to watch Heart of a Dog silently, experiencing it in an entirely new way, as well as an immersive 5.1 English surround mix that honors Anderson’s one-of-a-kind voice and astonishingly empathetic score, which joins with her voice to suggest the intimate highs and lows of her emotions.

This is a relatively slim supplements package for the Criterion Collection that nevertheless honors the searching free-form concerns of the film. The most essential feature is the new interview between Anderson and Heart of a Dog co-producer Jake Perlin, which charts the film’s gradual emergence from other Anderson projects, tracing how her performance-art influences her cinematic art. Anderson’s Home of the Brave and Habeas Corpus are discussed at length, as is her process of selecting footage and images, and the resonance this selection has for her family. Anderson talks in matter-of-fact profundities, memorably describing life as a struggle to tell your own story of yourself, insisting that many of those who tell your story for you see you as a customer. There are snippets of Anderson’s 2016 Concert for Dogs that blends footage of Heart of the Dog with a performance structured around dogs barking, which is weirdly tedious yet poignant. The same can be said about Lolabelle’s Christmas card, which has the dog playing Christmas carols on a small keyboard. A pair of negligible deleted scenes, the film’s theatrical trailer, and a booklet with an insightful essay by critic Glenn Kenny round out the package.

Heart of a Dog seems more prescient, brilliant, beautiful, and simply necessary than ever before. Criterion honors that need with a characteristically gorgeous transfer and a handful of illuminating supplements.