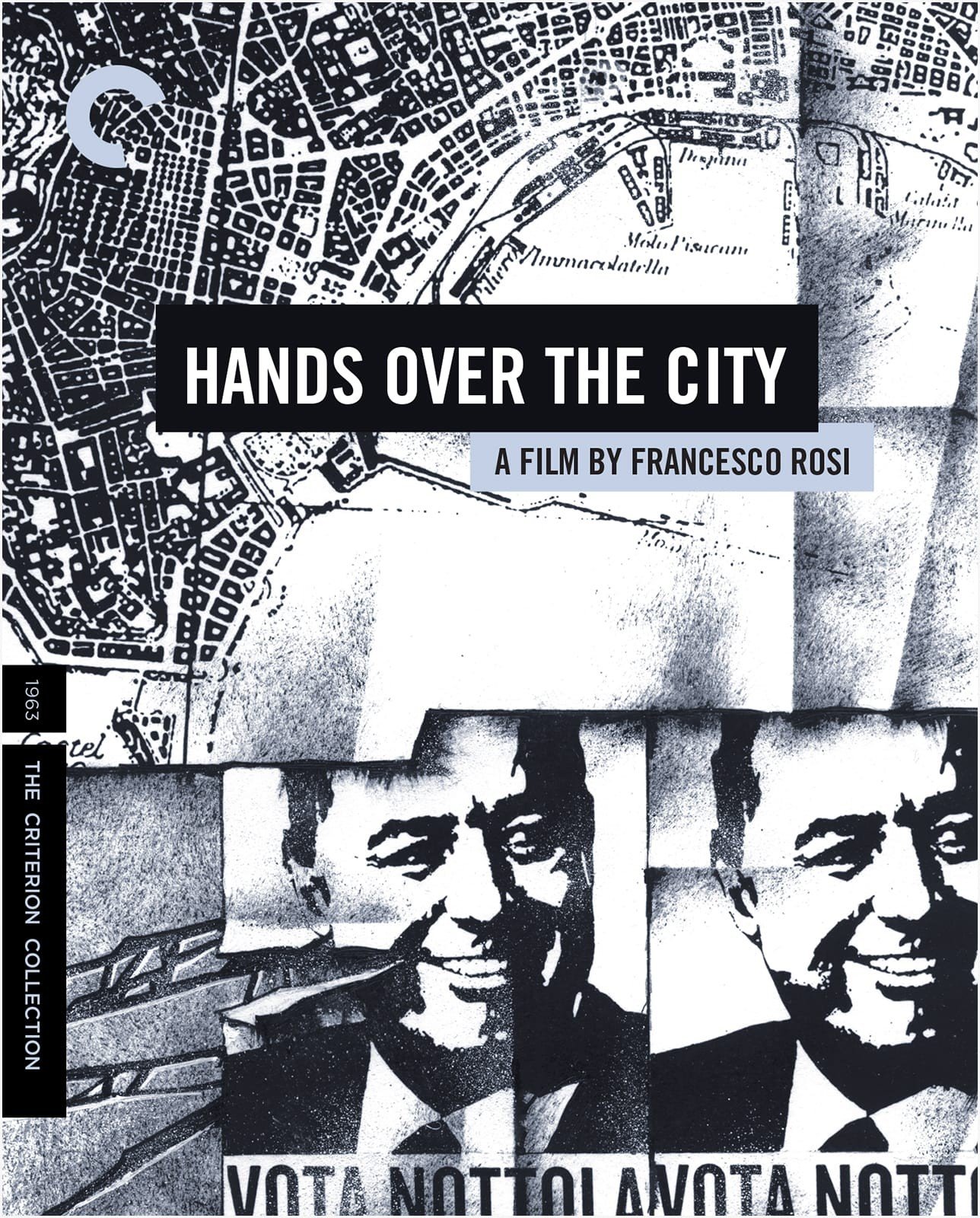 Like Michelangelo Antonioni, Francesco Rosi sees architecture as a reflection of cultural turmoil, but whereas the sleek designs of Antonioni’s L’Eclisse function as humanity’s surrender to the glassy surfaces of modernity, Rosi’s hollowed-out edifices in Hands Over the City signal a society’s vulnerability to institutional corruption. Indeed, the buildings trumpeted as evidence of Italy’s ’60s industrial boom become a sprawl of exposed rot in the muckraking director’s sinister helicopter shots; the feeling of decay is so pervasive that, when the walls of a malnourished Naples construction come tumbling down near the beginning of the picture, the effect seems both shocking and inevitable.

The tragic collapse triggers an official inquiry, mirroring the investigative thrust at the heart of Rosi’s filmmaking; the bureaucratic trail of crumbs leads to Notolla (Rod Steiger, whose intensity can’t be dampened even by a noticeably dubbed Italian voice), a powerful building speculator with a seat in the municipal Council. The inspection, led by crusading politician De Vita (Carlo Fermariello), finds no small amount of human neglect and real-estate skullduggery in Notolla’s buildings, yet the main battle is waged within the confines of the Council hall, forcefully visualized by Rosi as the arena for an ongoing duel of interests where, as one character puts it, the only sin is losing.

Because Rosi employs journalistic devices to X-ray the innards of the system, it’s tempting to label his investigations “documentary-like,” a tendency that proves misleading when one realizes a richness of stark formal stylization that brings Salvatore Giuliano closer to silent Russian cinema than to postwar Italian neorealism. Similarly, Hands Over the City spends as much time delineating a corrupt society’s multilayered culpability—its countless sullied hands—as it does luxuriating in the nearly operatic stylistic spectacle of bulky men ominously arranging their machinations in offices overlooking the crumbling city. Still, political anger is Rosi’s principal concern, and his outrage can sometimes be voiced a bit too explicitly: When a Council member illustrates his idea of democracy by handing lira bills to begging old women, the passage has the didactic heft of an unnecessary exclamation point.

For the most part, however, the film remains rigorous in its refusal to draw tidy conclusions. De Vita brands Notolla an “outlaw,” but Rosi sees the character less as a clear-cut villain than as a human gear in a larger machine of institutionalized power plays, whose corruptibility never abstracts him so much that he cannot feel for his own fall from grace. To divorce their actions from the human toll it takes, one character tells another not to “frame this in moral terms. Look at it from the political angle.” Rosi’s urgency lies in his refusal to separate one from the other.

The restored transfer is excellent, highlighting the wealth of darker grays and hardness of line with which Francesco Rosi sculpts his fierce compositions. The sound is also strong, even with the slightly disembodied effect that often comes from Italian dubbing.

The feature-length Neapolitan Diary, from 1992, returns Rosi to the Naples of Hands Over the City for an uneasy mix of travelogue, political master class, and historical elegy. Rosi plays himself attending a screening of the 1963 film, though he characteristically sidesteps nostalgia or self-congratulation in favor of reportage, assuring the audience that things have hardly changed much in the three decades since the original release. The director himself, past 80 yet vigorous as a bull, emphasizes the importance of location shooting and gives props to Steiger in a video interview, before joining screenwriter Raffaele La Capria and Positif critic Michel Ciment for a discussion. Other interviews include film critic Tullio Kezich and fellow cinematic questioner Jean-Pierre Gorin, who praise Rosi’s style and his “cinema of consciousness.”

The walls of urban corruption come tumbling down under Rosi’s muckraking gaze.

Review: Disney’s The Fox and the Hound Gets 25th Anniversary DVD Edition