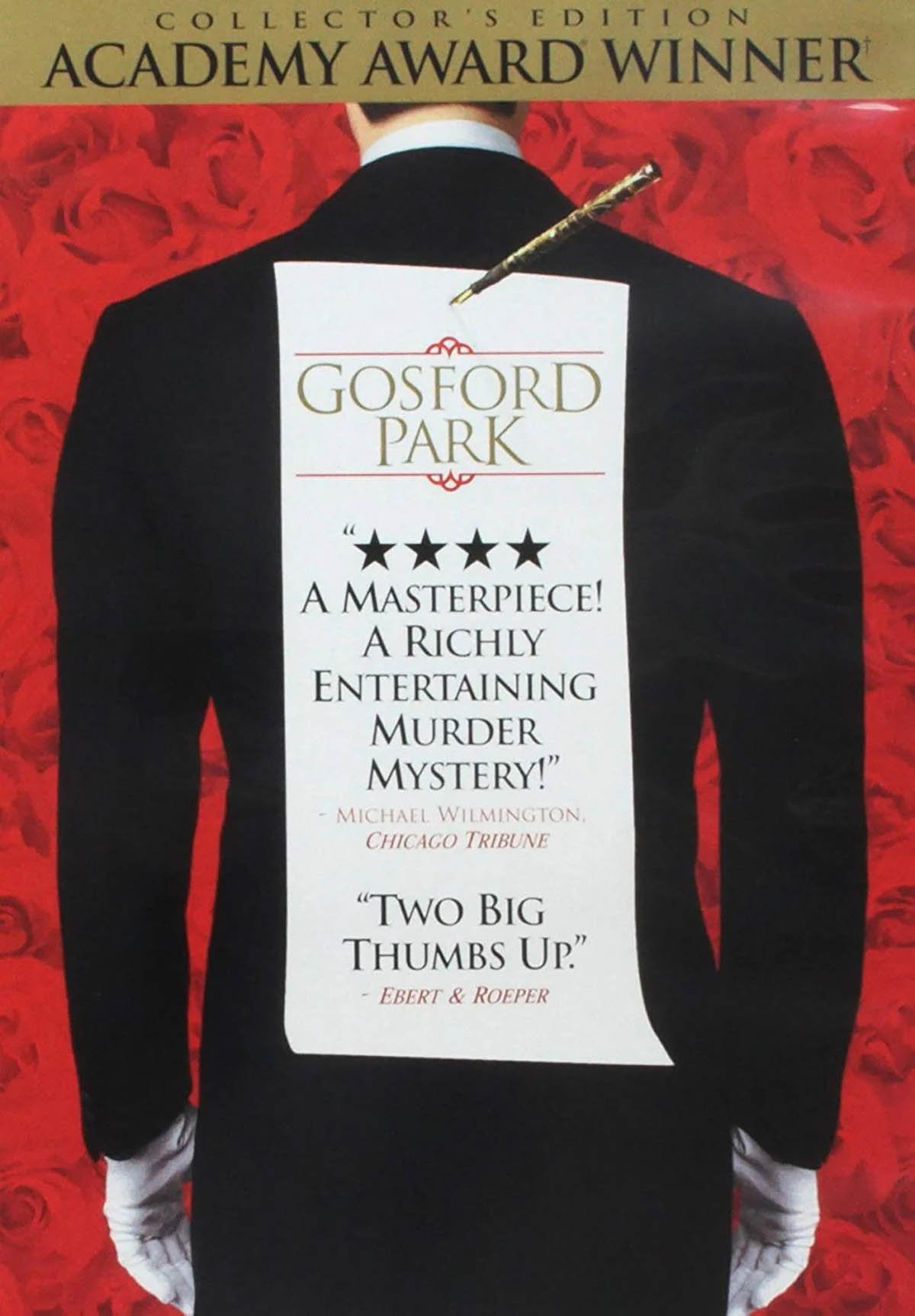 The game of Clue never looked as good as it does in Robert Altman’s Gosford Park, a light yet biting study of the English class system that filters Agatha Christie through the sensibility of Upstairs Downstairs. With icy wife Lady Sylvia (Kristen Scott Thomas) in tow, Sir William McCordle (Michael Gambon) hosts the kind of shooting party that can only end in disaster. Altman carefully dodges the screwball pitfalls that have come to define his more excruciating ensemble pieces (A Wedding, Ready to Wear). Friends, family and servants alike become implicated in a homicide yet Gosford Park cannot be taken as a straight-faced murder mystery. Death may constrict the physical proximity between suspects and force the revelation of family secrets yet the rules remain the same; by film’s end, the hierarchical layers become as dense and duplicitous below the stairs as they are above.

Bitchy footman George (Richard E. Grant) witnesses the master’s daughter, Isobel (Camilla Rutherford), in a close corner with guest Freddie Nesbitt (James Wilby). While the girl’s contempt for George is obvious (“Don’t worry, he’s nobody”), by situating at least one servant in every upstairs scenario Altman fascinatingly emphasizes the pervasiveness of servitude. (Additionally, there are now eyes and ears as witnesses to every exchange of words and glances.) Far sadder than the family’s need for constant pampering is the notion that the relationship between upper and lower classes is a co-dependant one. Elise (Emily Watson), the head housemaid, speaks out of turn by defending Sir William at the dinner table; her faux pas is her undoing yet the real tragedy is that she thinks herself worthless without servicing William (here, in more ways than one). Far more interesting is the all-encompassing nature of the rules. Interrupting the servants during their dinner-respite, the frigid Lady Sylvia is all peaches and cream; she’s outnumbered below the stairs, an uncomfortable stranger in her own home.

Altman’s camera is the star of Gosford Park, though it fares better below the stairs than it does above. His signature wayward close-ups prognosticate unseemly deaths, panes of glass emphasize the claustrophobic nature of the servants’ daily work and mirrors stunningly implicate suspects of their crimes. Altman’s cramped framing fiercely compliments the rigid hierarchy of power that rules and threatens to shatter the servant roost. Staircases become the literal divisions between classes while Altman’s stoic camera glances up at and humbles his servants. Since Altman spends most of his time with the lower class, upper-class scruples are often shortchanged; some relationships remain unclear, no thanks to meandering business negotiations and an otherwise trivial blackmail. Lady Sylvia may have one too many sisters and guests at her party though Claudie Blakley is wonderful to watch as the poor Mabel Nesbitt, who’s hen-pecked by the Countess of Trentham (the devilishly catty Maggie Smith).

Morris Weissman (Bob Balaban), fictional Hollywood producer of Charlie Chan films, and his Scottish valet, Henry Denton (Ryan Phillippe), are also present at the Gosford shooting party. As different as the rules are between family and servants so are the ones between Brits and Americans. Weissman is used to being served during breakfast (when the British usually serve themselves) while the cook (Eileen Atkins) is taken aback by the producer’s vegetarianism (“They do things differently over there”). Weissman’s phone conversations to California regarding the upcoming Charlie Chan in London production broadly feed the film’s simple-minded, albeit charming, fondness for miscommunication and self-referentialism. Denton is viewed suspiciously by both the servants and the family. He’s an intrusive figure in both the lower and upper sections of the home (below the stairs he harbors delusions of grandeur, above he appears to act out of turn). Soon after the film’s murder, the character’s true identity is fascinatingly revealed. No matter how innocent his intentions may have been, Maud’s (Tilly Gerrard) words speak for themselves: “You can’t be on both teams as once.”

Universal put the wrong person on the controls when transferring Gosford Park to DVD. Robert Altman’s once majestic game of Clue looks atrocious on the small screen. Forget the ridiculous video-verité introduction that transitions into the disc’s uninspiring interactive menus, the image quality of this video transfer is downright lousy from start to finish. The interior “downstairs” scenes look great though the “upstairs” scenes are too dark and plagued by noticeable compression artifacts. Even worse are the excessively grainy exterior scenes, especially the hunting sequence. Perhaps the shooting schedule is to blame (this scene was shot way before the official production began) but not only is the image noticeably pixilated but edge enhancement is very noticeable. That said, there is no director in cinema who pays as close attention to sound as Altman. Gosford Park sounds amazing for a film so dialogue-dependant. The overlapping dialogue is so incredibly layered, it’s almost as if Altman is daring you to look for clues amid the 101 delicately-microphoned voices.

The problem with Gosford Park’s two commentary tracks (one with screenwriter Julian Fellowes and one with Robert Altman, production designer Stephen Altman and producer David Levy) is that much of the discussion feels redundant. An anecdote-happy Fellowes discusses the film from a theoretical and gentlemanly point of view. Altman’s focus is, unsurprisingly, more on the ensemble acting. The key feature here is a 25-minute Q&A session with Altman, Fellowes, Levy, Bob Balaban, Kelly Macdonald, Helen Mirren, Jeremy Northam and Ryan Phillippe taped after a screening of the film at the Leonard H. Goldenson Theatre at the Academy of Theatrical Arts & Sciences Foundation. Balaban discusses how the film evolved from a riff on Christie’s Ten Little Indians to a study on the “upstairs” dependency on the “downstairs.” Altman evocatively describes his effortless directorial style as a delicate collaboration between the camera and his actors, referred to here as planets trying to find their orbits without crashing into one another. Macdonald gets the million-dollar question: “Why does every actor want to work with Robert Altman?” Macdonald admits that it’s been engrained into every actor that they must work with him and since Altman more or less has his cast in mind before shooting a film, one must feel sorry for every actor who has never gotten a call from the auteur director.

Altman fans may find most of the features on this Gosford Park DVD a bit redundant, especially for anyone who has seen the great Short Cuts documentary Luck, Trust & Ketchup: Robert Altman in Raymond Carver Country. “The Making of Gosford Park” focuses on Altman’s travels through Agatha Christie country. This perfectly routine documentary is most notable for one moment in particular where Altman discusses how a crucial plot point may not have been conveyed had the film’s script-supervisor not paid careful attention to the actors’ improvisations. “The Authenticity of Gosford Park” is essentially footage from the making-of documentary though the focus here is on the butler, cook and parlour mail technicians who helped the cast understand the form and function of their roles. Robert Altman provides weightless commentary on 20 minutes worth of clearly disposable deleted scenes. Altman knows when a scene doesn’t work though one scene in particular is worth noting because it mentions the looming threat of WWII. Also included here are cast and filmmaker filmographies, the film’s theatrical trailers, a plug for the film’s soundtrack and ads for other Universal titles including Apollo 13, Family Man, the terrifying Patch Adams and the even more terrifying K-Pax.

A terrible video transfer for a remarkable film that, at the very least, is still wonderful to listen to.

Interview: Paul Mescal and Emily Watson on the Faith and Familial Fallout of God’s Creatures