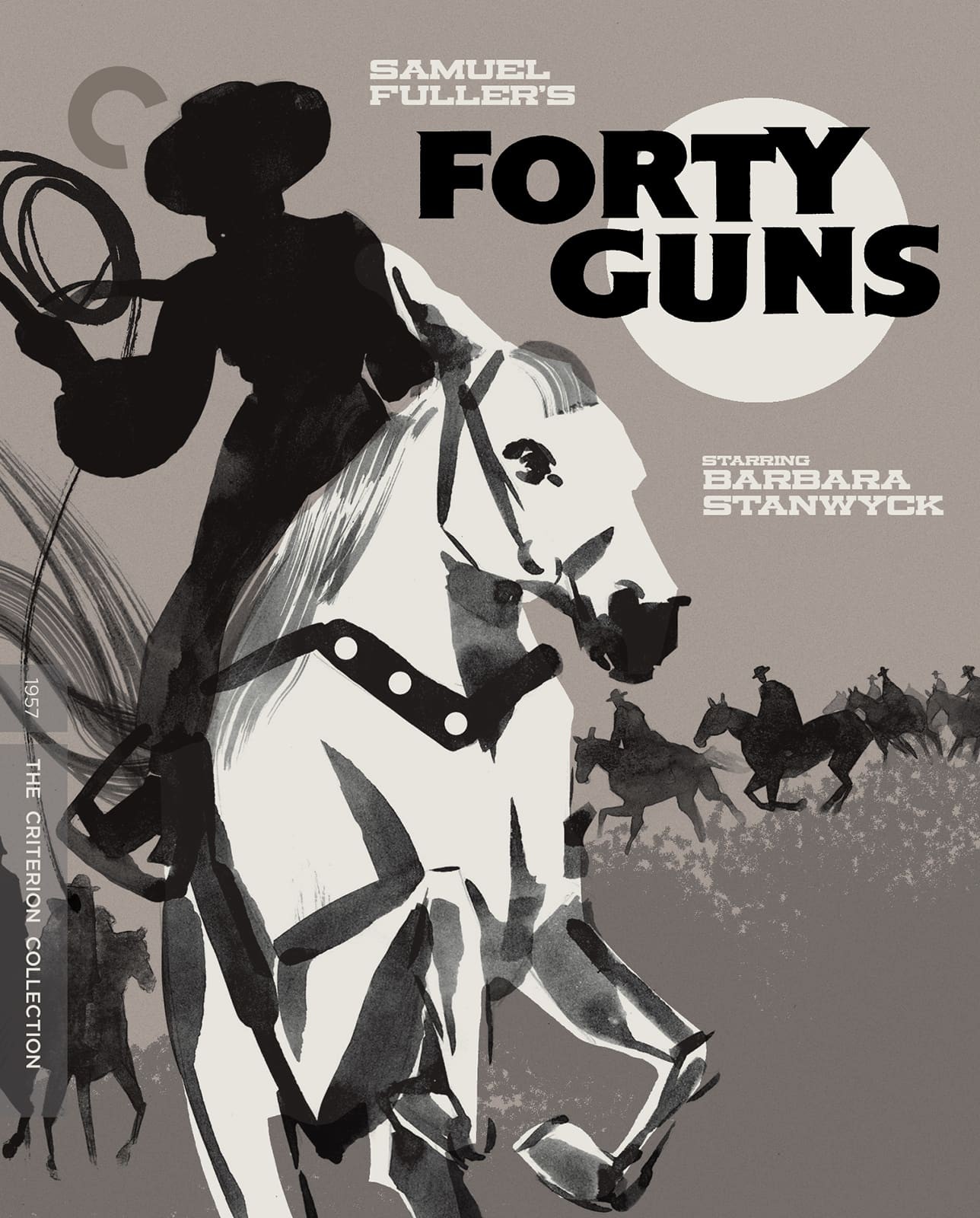 Though shot in a drum-tight 10 days, and on a low budget, writer-director Samuel Fuller’s raw, punchy noir-western Forty Guns isn’t a film of half-measures. As it acquaints us with Tombstone, Arizona, the parched Cochise County town where its action takes place, the 1957 film does so with an unbroken dolly shot that runs the entire length of main street, taking in something like 50-plus actors in choreographed motion and encompassing both an exposition dump and a startling zoom-and-pan reveal.

When Jessica Drummond (Barbara Stanwyck), the territory’s domineering land baroness, conducts her daily business via horseback, she does so with all 40 of her grizzled hired hands in tow, a thunderous spectacle trotted out for matters both large and small. And when a tornado rips over the hills, realized by Fuller and his crew as a high-powered dust storm that renders the landscape a grainy, swirling abstraction, Stanwyck is right in the middle of the fray; the script called for Jessica to be dragged along with the hoof of a runaway horse, and Stanwyck insisted on performing the daredevil maneuver herself, much to the chagrin of producers.

Bold expressionism and brawny physicality were staples of Fuller’s filmmaking career—qualities surely indebted in some part to his experiences as an infantryman and cameraman during World War II—and in Forty Guns the entire cast is synchronized with that sensibility. The film is possessed of an earthy eroticism, evident in a number of scenes dedicated to watching Tombstone’s men bathe openly under the afternoon sun, as well as in an insistent streak of sexual innuendo in the dialogue, wherein any talk of a man’s gun is quite transparently an allusion to his cock.

Upon the arrival of pacifistic U.S. Marshal Griff Bonell (Barry Sullivan), carrying a warrant for the arrest of Jessica’s rotten brother, Brockie (John Ericson), in town with siblings Wes (Gene Barry) and Chico (Robert Dix), the townsfolk’s dormant sexual energies are expulsed, with Wes angling for local gunsmith Louvenia (Eve Brent) and Griff himself going after Jessica. In a place where gunfire is the prevailing expression of emotion, violence and sex thus become intimately entangled—a link visually represented when Wes and Louvenia’s mutual desire is consummated by an eccentric down-the-rifle-barrel POV shot that Jean-Luc Godard would crib for Breathless only three years later.

This suggestive visual punnery aside, the structure of Forty Guns ultimately accommodates a shift from lewd flirtation to emotional vulnerability, with the at-first caricatured threat of violence becoming a real and deadly threat indeed, as new bonds are sewn and prior allegiances are fissured. Griff, having vowed to retire his six-shooter, awakens Jessica’s sensitive side in the process of spending time with her, breaking down her desperado roughness with his nonviolent, levelheaded enforcement of the law.

The moment when Jessica seems to have fully emerged as a more complicated woman than she initially appeared is among the film’s most beautiful: When she and Griff find shelter from the aforementioned tornado in an abandoned barn, a lilting crane shot descends from the rafters to find the lovers entangled from head to toe in a pile of hay, the camera finally landing in an intimate two-shot to survey their nostalgic exchange without a single cut. It’s a scene of aching tenderness in the midst of bawdy farce and jolts of brutality, but such a commiseration of souls proves fleeting in a land of hardened alliances and quick triggers, and it’s this very union that acts as the catalyst for an accumulating body count.

The film’s tonal swing from goofiness to severity is best exemplified in the three Tombstone ambushes conducted by Brockie. The first, seemingly the result of a drunken whim, is a maniacal shooting spree played mostly for shock laughs (save for the mood-puncturing casualty of an innocent blind man), and concluded by Griff’s swift pistol-whipping of the terrified Brockie. Mirroring this is a more coordinated attack later in Forty Guns when a wedding is interrupted by a surprise bullet, immediately throttling the mood from revelry to tragedy—and leading to a hymnal-led funeral scene to rival those in John Ford westerns. Finally, the third ambush in Tombstone finds Griff again marching calculatedly toward a menacing scene, only this time unsure of the whereabouts of the aggressors. Fuller stages the scene as a high-wire standoff between three disparate points of threat, juicing the dramatic irony to a breaking point until Griff expertly diffuses the situation, but not without preventing another death.

Shot in black-and-white CinemaScope at a time when the format was largely reserved for color productions, Forty Guns’s deep chiaroscuro anticipates the characters’ deadly impulses and the grave directions that the drama takes. It all leads to a climactic showdown of remarkable savagery that seems to confirm an irrepressible violence within the hearts of even the most upstanding among us—though it’s followed then by a studio-mandated corrective to it, a scene that partially aims to clear the dust churned up by such a bleak capper. Fuller includes a line of dialogue that complicates the uplift, but even if he hadn’t, Forty Guns’s damning treatise on gun infatuation and the incapacity to transcend one’s nature had already landed its heaviest blows, leaving a bitter aftertaste that no smearing of schmaltz could quite undo.

Studio-shot interiors are granted a superb degree of contrast, with the deep, inky shadows doing full justice to the film’s celluloid origins, in addition to mirroring the bottled-up anxiety and rage in the characters. Meanwhile, location work in the foothills of Arizona is awesomely vivid. When Barbara Stanwyck or Barry Sullivan ride across the landscape on horseback, the subtle gradations and tones of the arid ground are as compelling as the action being depicted. And suitably for a film at least partly about the destructiveness of firearms, the howling gun blasts heard on the audio track are enough to get the attention of the neighbors, if not too loud to overwhelm the at-times hushed dialogue and gentle desert ambiance.

The meatiest supplement here is “A Fuller Life,” Samantha Fuller’s affectionate feature-length tribute to her father’s experiences as a journalist, infantryman, and filmmaker, unconventionally presented as a series of readings from his autobiography, A Third Face, by directors and actors who knew him. Not all these participants seem equally enthusiastic about the project, and the documentary consequently has some dry, overly wordy passages. But the access to Fuller’s treasure trove of personal material—clips from his old bylines, footage from WWII, and production files—makes it never less than a fascinating excavation for acolytes of the artist.

Similarly rewarding in this regard are the three other bits of deep-dive Fuller content: an entertainingly candid 1969 interview with the director that can be played as a commentary track, a printed excerpt from A Third Face that goes into some detail about Forty Guns’s production, and a newly shot interview with Fuller’s second wife, Christa Lang Fuller, and daughter that plays like a heartfelt stroll down memory lane. Rounding out the package is an essay by film scholar Lisa Dombrowski and a new interview by critic Imogen Sara Smith, who, in a welcome pivot from all the attention lavished elsewhere on Fuller, conducts a fairly thorough examination of Barbara Stanwyck’s performance in Forty Guns, hailing it as an impassioned summation of a career that was on the decline by the late ’50s.