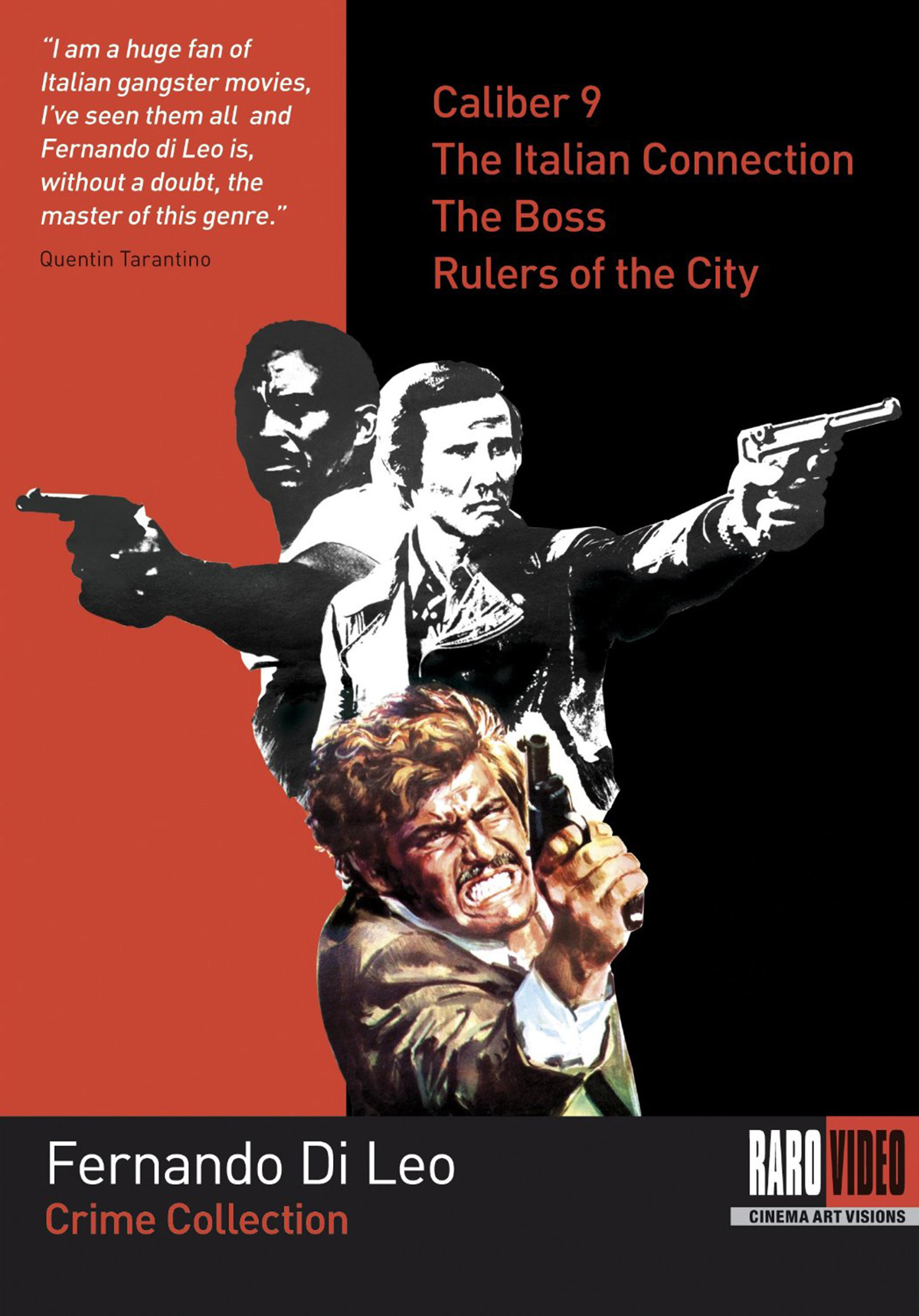 The most disappointing part about plowing through Raro Video’s Fernando Di Leo Crime Collection is knowing that once you’ve seen Caliber 9, the oldest film in the box set, it’s all downhill from there. Thankfully, the descent in quality that ensues is fairly mild and, if nothing else, cheapy mob films like The Boss and The Italian Connection provide a number of embellishing details on Di Leo’s most singularly sleazy gangster pic.

Di Leo’s films have a hard-edged cynicism to them, democratically depicting everyone as scumbags. His films tend to drift between crisscrossing storylines. No one group of characters stays in Di Leo’s spotlight for long because they’re all cut from the same cloth and hence are largely interchangeable. Caliber 9 ends with everyone having gotten their due except for Rocco Musco (Mario Adorf), an enforcer and the most proudly obnoxious character in the film. He doesn’t even quit Caliber 9’s proceedings after having gained anything save for the small satisfaction of choking to death a man that insulted his rival, Ugo Piazza (Gastone Moschin), an ex-con suspected of swindling Rocco’s boss out of $300,000.

Caliber 9’s pitiless ending brings together the best aspects of Di Leo’s films. Based on a novel by then-popular giallo novelist Giorgio Scerbanenco, the film boasts characterizations that have a consistency and a focus that makes the ending extra-satisfying in its own bleak way. There’s no escape for the characters, no way for them to avoid the fate that is actively foreshadowed throughout the film, especially when Ugo shacks up with ex-girlfriend Nelly (Barbara Bouchet) and she begs his forgiveness for having attached herself to another man during Ugo’s three-year stretch in prison. The way their romance violently concludes is enough to make Rocco’s last-minute defense of Ugo that much more gratifying. Di Leo’s characters never really form substantial, long-lasting allegiances because even when they do it’s too late for it to matter.

Di Leo goes one step further in The Boss, where Henry Silva, who plays an ultra-loyal hitman, reluctantly seduces the nymphomaniac daughter of his boss. Before Silva’s character realizes that he actually wants to pounce on this weed-and-booze-addled bohemian, he has to practically pry her off of him as she looks him over with an addict’s lust. She gives him a desperate litany of her past conquests while licking her lips: “Professors, students, thieves but never a murderer.” He naturally retorts, “You’re insane. I’m serious, go check into a madhouse.” Shortly after that, they have sex.

Everything and everyone is relatively scuzzy in Di Leo’s films, though never as convincingly as in Caliber 9. No matter how many rotary telephones are head-butted to pieces or rocket launchers are used to murder scores of people, they’ll never be equal to the chilly depths of that film, in which sex is just a trip that two very lonely people happen to take before betraying each other. When Lanza’s crooked hood declares in The Boss that “out there is the wrath of God,” the “out there” in that statement could very well be Di Leo’s other movies. They’re great window dressing, but Caliber 9 is the essence of Di Leo’s world.

All the films in Raro Video’s new box set were digitally restored in collaboration with the Venice Film Festival. They’re presented in the proper aspect ratio, the picture quality is crisp, and the audio soundtracks are more than adequate for mono restorations, especially considering that the sound effects and dialogue were post-dubbed into the film—as they were with the vast majority of Italian films of the period.

Raro Video has once again done a characteristically stellar job collecting special features for this collection. The best feature is a booklet that includes a candid interview with Fernando Di Leo about his career. Segments where he expresses his distaste for the “hyperbole” of the spaghetti western and feeling that television has bested film as the main medium that consumers get their pop culture from are especially exciting. A bevy of comprehensive documentary featurettes discuss all four films in the collection from varying angles, from Di Leo’s oeuvre to their place alongside his noir contemporaries.

The Fernando Di Leo Crime Collection features one essential B movie and three perfectly adequate ones. Together, they form a petition for canonization that will likely fall on deaf ears save for the handful of genre geeks that are already actively seeking the next unexplored dark corner of film history.