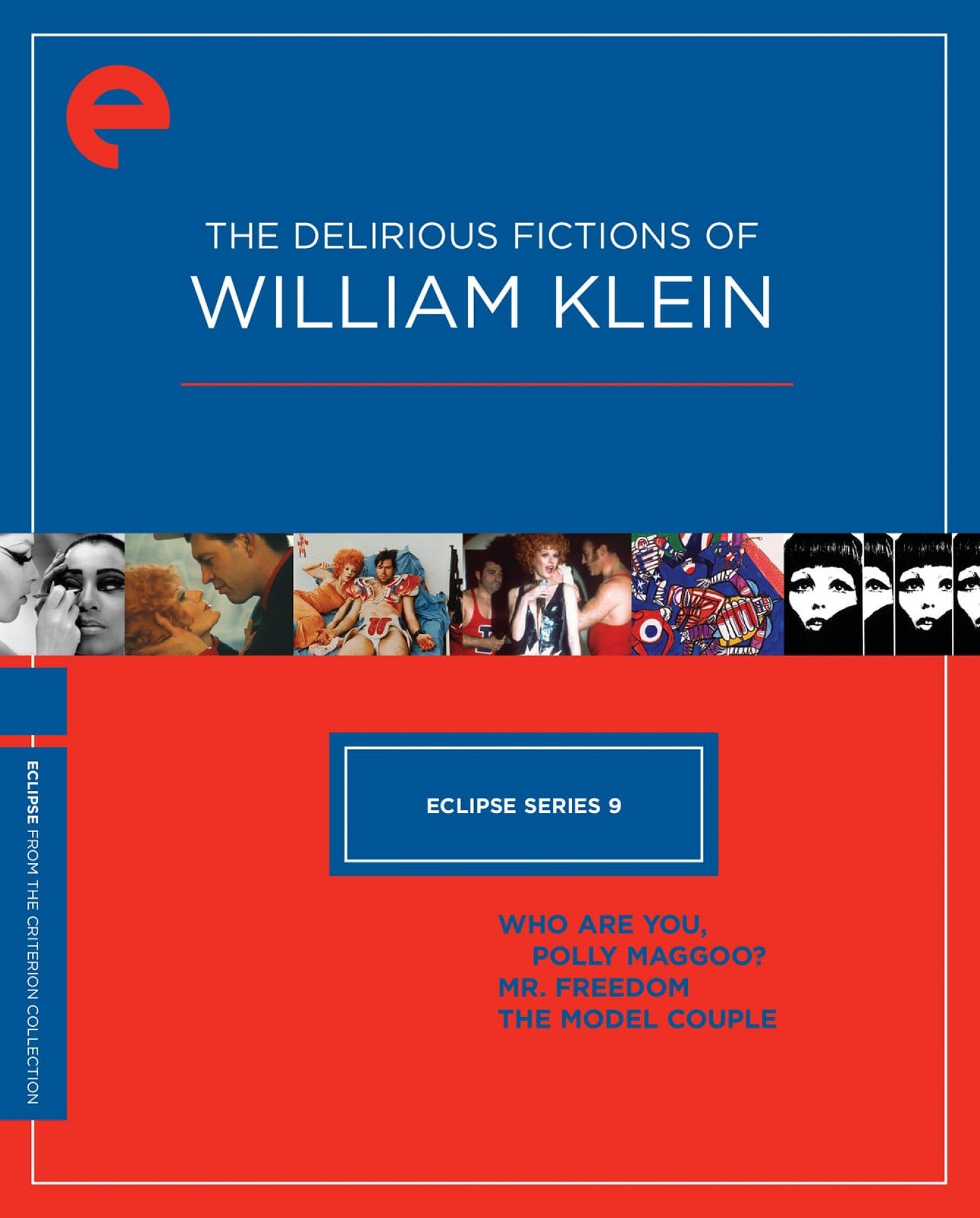 If the French New Wave had a Frank Tashlin equivalent, it was William Klein. Though cinephiles will assuredly know him best as the man from the past in Chris Marker’s La Jetée, he was more famed for his own still photography that made him a vanguard star (reluctantly, one feels) in the Vogue fashion world of the 1960s. He defected to France, and almost his entire filmography is composed of documentary portraiture, but he has slipped in a few fiction burlesques into his oeuvre, perhaps in an effort to prove to himself his credentials as a bone fide Left Bank member. (As though participation in Far from Vietnam wasn’t enough.) Erratic and undisciplined, the three films collected in Eclipse’s box set reflect the director trying as hard as he can to be French, but never quite shedding his background as an American blowhard.

To that effect, the most notable film in the box (and one of the seminal films in the entire countercultural underground of cult cinema) is Mr. Freedom. A hybrid of Jean-Luc Godard in full-on genre mode with the political fire of Jean-Luc Godard in Dziga Vertov mode, but heavily filtered through Harvey Kurtzman-era Mad Magazine, Mr. Freedom shows America no mercy. The entire country is reflected in the title character, who is a bulldog agent for the government (well, actually he works for a sort of ministry out of George Orwell’s 1984, but it’s still clearly meant to suggest the same bureaucracy responsible for Vietnam escalation). He begins the film dressed as a racist Southern sheriff, walks past a mimeographed poster of JFK with the slogan “Wanted for Treason” underneath, opens up his closet with pictures of naked women pasted on the doors and begins to change clothes. One scene later, he is shown single-handedly raiding a black family’s dinner, spewing reactionary propaganda at them and, with scarcely a lick of explanation, mowing them down with a machine gun. Why? Because that’s the American way.

As played by John Abbey (who leads with his jaw and frequently plants his feet on the ground at least four feet apart), Mr. Freedom’s metaphorical status as “The Ugly American” extends well beyond mere entitlement into the realm of pure, psychotic pathology. When he arrives in France, sent by the agency to stop the rising tide of Red Communism lest it spill over into the rest of the continent, he checks into a hotel and tosses the window washer from off his deck outside, just because. He puts his French Freedom contact, the fetching Marie Madeleine (Delphine Seyrig in an explosive, orange fright wig), in a chokehold at their first meeting. He spouts off racist, sexist, downright hateful rhetoric with the confidence of an operatic tenor, secure that his words are as sweet to the ear as an aria. Klein’s film might be off the rails, but you can’t accuse him of making his feelings about the influence of American culture on the world at large too nebulous or relativistic. Mr. Freedom is both mental as well as excremental, and its refusal to play fair gives it the initial charge of a political stump speech you know won’t hold up hours later, when you’re not standing among thousands of braying zealots. You know you’re breathing rarified air when Jonathan Rosenbaum reckons the film is “anti-American.”

That said, Mr. Freedom is quite obviously the formal achievement of a smart, careful still photographer, who understands the power and corruption behind commercial, pop imagery. Mr. Freedom’s every frame is an eye-popping, perfectly balanced advertisement, and Klein makes sure you understand that the ideas most images you’re exposed to are selling isn’t pretty. Not surprisingly, Klein’s earlier film did for fashion what Mr. America did for U.S. bluster. Who Are You, Polly Maggoo? is a surreal, decadent destruction of the glamour scene. Polly Maggoo is an American in Paris, a glamorous model who attracts the attention of both aristocratic royalty as well as deeply skeptical media titans. While a Prince Charming deigns to give Polly the fairy-tale fantasy life her photographs indicate she’s more than ready to accept, a TV producer is attempting to film her life in order, it seems, to expose the vacuous void that exists beneath her photogenic exterior. While the expatriate Polly would seem to be the first candidate as Klein’s own self-representation, it’s far more likely that he’s the TV producer, acutely aware that fashion is an industry that makes a lot of clever people rich while malnourishing the self-esteems of most women.

The last, and least, film in Eclipse’s collection examines the aftermath of mass media assuming the crown as the new religion. One of the earliest satires of what we now know as reality TV, The Model Couple didn’t have a whole lot to go off of when it first appeared in 1977, aside from the PBS series An American Famiily and, maybe, Frederick Wiseman’s documentary examinations of American life as utilitarian endurance. In the film, a man and a woman are subjected to a televised intrusion of their personal lives, for which they are repaid with the sort of living conditions the mass media informs us all we should be happy to have. While the satire is as savage as in the previous two films, there’s something about Klein’s fixation on the government’s encroaching role as the puppetmaster behind such machinations that seems, today, unfortunately quaint. If anything, the tail is leading the tiger now, and mass media has proven a far more ruinously invasive element that hardly needed the government’s help to ensnare the general population.

According to IMDB, all three films were meant to be screened in 1.66:1 aspect ratio, but I’ve seen at least one review that notes The Model Couple is actually supposed to be full frame. I have to admit, there are a ton of heads getting cut off at the top, and I could easily see this being a monumental fuckup on Criterion’s part, especially because the framing on the other two films seems so hyper-attentive to aesthetic effects befitting the director’s reputation as a famed still photographer. On the other hand, the entire point of Model Couple is that the couple are put into a crazily claustrophobic situation, so I guess I have to admit I’m stymied. The other two films look fine, but all three are absolutely drenched in grain. Colors on Mr. Freedom don’t quite pop as much as one presumes they’re supposed to.

Nothing, as per usual with Criterion’s Eclipse line, though I have to say the liner notes for each collection in the Eclipse series usually pack a lot of insight into the space of just a few paragraphs. I wonder who writes these things.

William Klein’s films may be more arrogant than anything by Jean-Luc Godard. Americans—always trying to outdo everyone.

Review: George A. Romero’s Night of the Living Dead on Dimension Extreme DVD