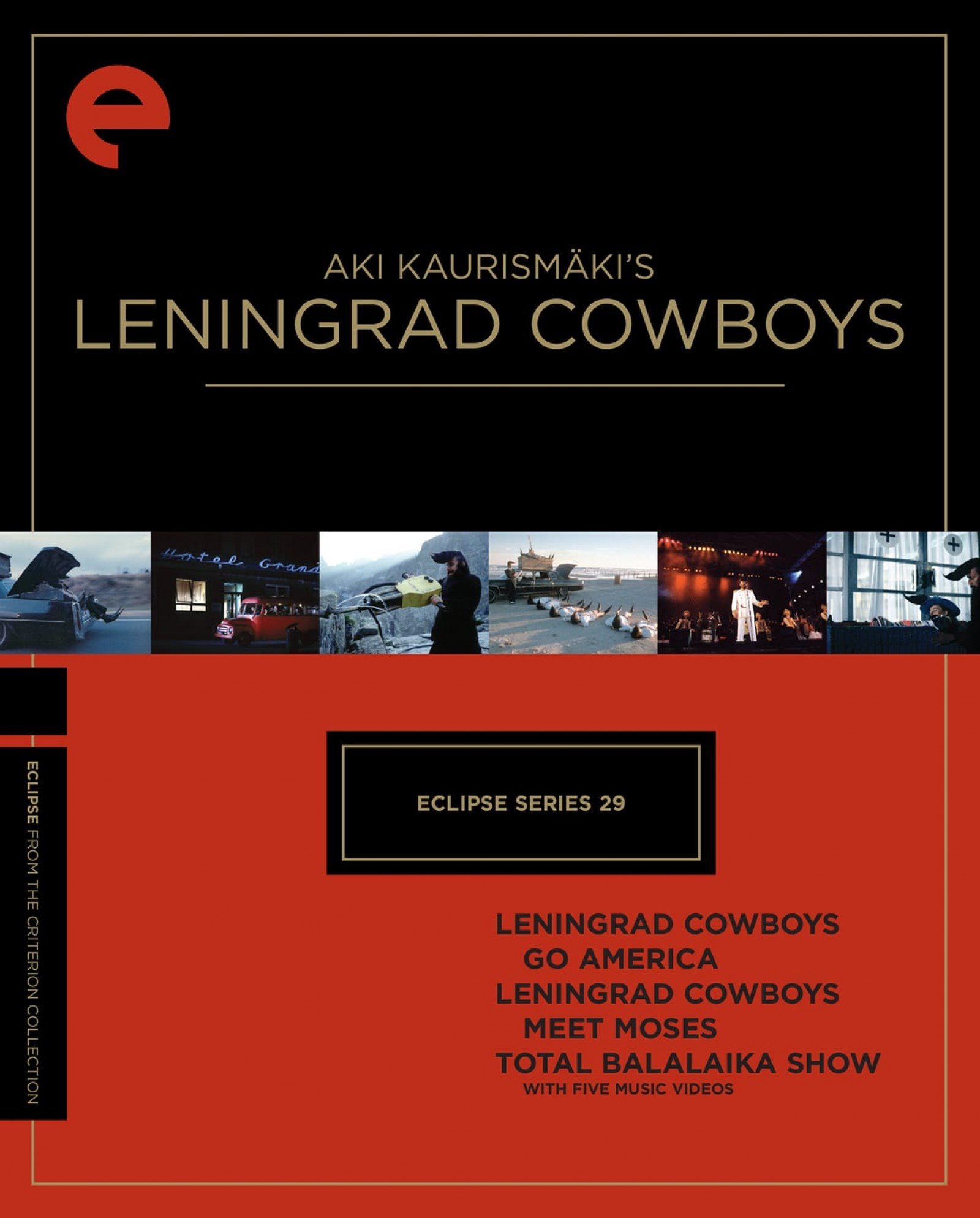 At the end of the 1980s, the Finnish fabulist-filmmaker Aki Kaurismäki spun a comic myth—aided by musicians with whom he’d worked on several antic rock videos, included in this Eclipse set—into perhaps his broadest comedy to date, Leningrad Cowboys Go America. But it’s wholly the director’s brand of drollery, informed by his often rigid framing and an acting style that ranges from deadpan to spasmodically dignified, giving a palpable touch of the heroic to the unlikely conquest of North America by a Siberian musical combo sporting pointy Winklepicker boots and rockabilly pompadours enhanced by a unicornish peak in front. Following an audition (with the folk warhorse “Oh, Field”) for a bleary music-biz suit in a barn on the tundra, their stoic manager Vladimir (the late Kaurismäki mainstay Matti Pellonpää) receives the terse advice: “Go to America. They’ll buy anything there.” Sentimentally packing up a band member who’s just frozen to death in an outdoor rehearsal (his quiff, shoes, and bass guitar all poking through gaps in the coffin lid), the Leningrad Cowboys decamp at the SRO hotel next to CBGB, book a gig at a Mexican wedding, and begin a haphazard tour of the American South’s musical capitals and backwaters, riding in a used black Cadillac (with comfy chairs wedged into the open trunk for the two most dispensable sidemen), their covers of “Tequila” and “That’s All Right Mama” often received indifferently. On their trail is home-village idiot Igor (Kari Väänänen), still pining to join their polka-meets-roots-rock outfit after an insufficiently discouraging beating.

Shot in lovely pastels and nighttime neon by Timo Salminen, Leningrad Cowboys Go America is partially a quiet valentine to the road movie (dialogue is sparse) as highway shots of smoke-belching industrial plants, cow pastures, and patches of Texas desert connect the farcical episodes of the band’s struggles. Vladimir, starving his charges to the point of feeding his barbecue leftovers to a stray dog while the famished Cowboys look on, finally faces a rebellion after pulling his umpteenth iced beer from the dead bassist’s pine box. There’s an abortive jazz funeral and jail stint in New Orleans, the pickup of a lost American cousin (the British punk singer Nicky Tesco) who becomes their lead vocalist, and an aura of cross-cultural affection that cuts through the lampooning of the USSR’s end times, culminating in a comic miracle (via Carl Dreyer’s Ordet?) as a Mexican singer leads the ensemble in the closing wedding gig.

Five years and one remade Eastern Europe later, Leningrad Cowboys Meet Moses followed up Go America’s global success with an equally daft but slower, less celebratory scenario. It opens promisingly, in a Sergio Leone vein, with the remnants of the tequila-decimated band making their way to Coney Island at the behest of Pellonpää’s Vladimir, who re-seizes the reins as a self-proclaimed incarnation of Moses; though black-clad and dubiously bearded, he instead brings Rasputin to mind. The wispy plot has a C.I.A. man (André Wilms) pursuing the mad prophet-manager, in possession of the stolen nose of the Statue of Liberty, to the coast of Brittany, where the rest of the Cowboys materialize in decorated, Politburo-style tunics, and they slowly play their way home, driving their junker van to grimy venues in Leipzig, Frankfurt, and Warsaw. Many gags are still agreeable (“Jesus saves, Moses invests,” hisses Vlad as he snatches cash from a Cowboy), but others are simple spoofing of bibilical tableaus—Moses drawing water from a rock with a power drill, lighting a bush aflame for inspiration—that keep music performance off screen for nearly the first half of the film. Kaurismäki joked that he was “inspired by the Old Testament, and I realized too late that no one had read it,” but the dreary nocturnal Europe that dominates the band’s trek (before a festive finale in Siberia) feels like a different sort of miscalculation. This downbeat odyssey that might’ve been better suited to black-and-white, as Salminen is hard up to beautify this desolate urban grunge with widescreen color.

In June 1993, Kaurismäki filmed the absurdly unlikely crescendo of the Leningrad Cowboys’ phenomenal domestic popularity as Total Balalaika Show, which records their set in front of 70,000 Finnish and Russian fans in Helsinki’s Senate Square. With rock-show fog rising from an onstage tractor’s grille, the now unquestionably “real” band tears through Russian folk classics and bombast-friendly Western pop anthems, fueled by the backup of the 150-member Alexandrov Red Army Chorus and Dance Ensemble. Far more surreal and goofily exhilarating than any encore managed by Spinal Tap, the segue from the full-throated, brown-uniformed chorus doing a resounding “Ballad of the Volga Boatmen” to their soloist grinningly sharing lead vocals on a cover of the Turtles’ “Happy Together” seems unsurpassable…until the blissful mindfuck of the company’s version of ZZ Top’s “Gimme All Your Lovin’.” The dancers in Russian folk wardrobe do-si-do, a chorister lets loose a hoedown whistle, and bits of the Soviet national anthem and a few Handel “hallelujahs” are interpolated into one joyously nightmarish eruption of sincere, shticky, manufactured kitsch. Along with the jaundiced good humor of Leningrad Cowboys Go America, it’s the peak of this bar-band parody’s journey to the end of an empire.

The transfers of all three feature films are solid and occasionally stunning, with the blues strain in the Leningrad Cowboys’ repertoire surpassed by the spectrum of blues in cinematographer Timo Salminen’s palette, still of a piece with his work this year in Aki Kaurismäki’s Le Havre. (And one of the music videos, the seeming Tom Waits homage “Thru the Wire,” is in beautifully smoky black and white.) The stereo audio tracks give sufficient heft to the music mixes, particularly the outdoor rock-and-choral circus of Total Balalaika Show, and the minimalist, comedy-centric sounds from whistling tundra winds to a car hood thumping on Vladimir’s head.

None on the discs (the five music videos are part of the main program), but there are brief, informative liner notes for each of the features by critic Michael Koresky.

“Minor” Kaurismäki to the same degree that This Is Spinal Tap is major Rob Reiner, this deadpan musical saga is also a novelty headstone for the Soviet epoch.

Review: Philippe Garrel’s The Salt of Tears Forecloses Feeling for the Sake of Fantasy

DVD Review: Jean Renoir’s The Rules of the Game on the Criterion Collection