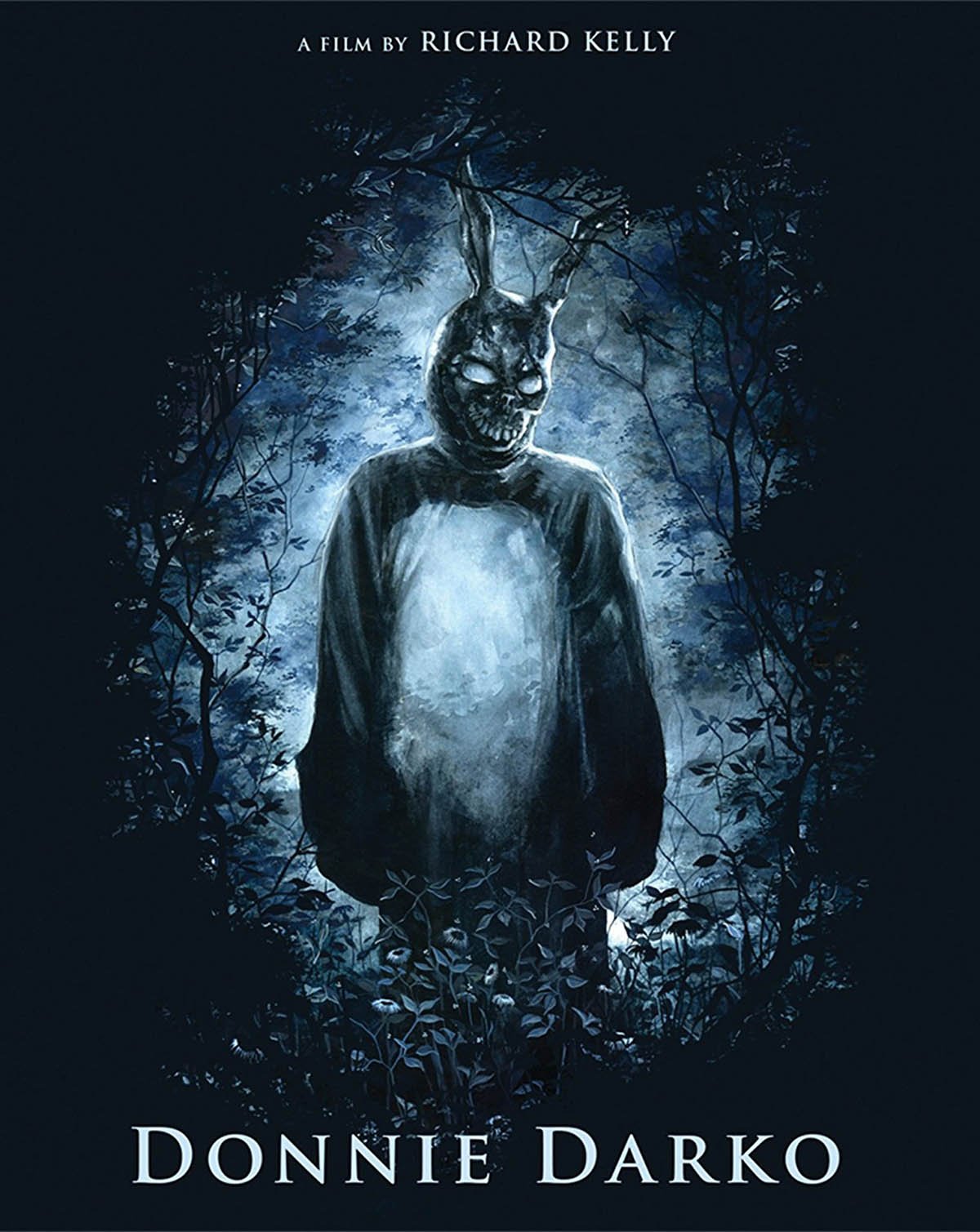 A cult classic happens when artists are ahead of the curve, intuitively anticipating what will resonate with audiences tomorrow rather than today. Nostalgia can be corporatized, as the success of Stranger Things and the proliferation of 1980s-themed horror films continue to prove. But an authentic cult classic isn’t calculated, adhering instead to the rules of its own internal agency at the expense of immediate popularity—a description that suits writer-director Richard Kelly’s Donnie Darko and many of the works that inspired it. The film was ahead of the 1980s-nostalgia cycle by a few years while existing near the front of a more powerful trend: contemporary pop culture’s obsession with reality as a subjective illusion.

Karmically speaking, it feels right that Kelly’s film was released in 2001, the year of 9/11 and Mulholland Drive. Nine-eleven tore an unhealed hole in the American psyche that Mulholland Drive and Donnie Darko retrospectively appear to explicate. This notion is coincidental for these films, as they were conceived before the attack on the World Trade Center. But this incidental and particular call-and-response between disaster and art still reverberates in pop culture, regardless of its roots in coincidence, and would be influential to future filmmakers imbuing nostalgia with a concern for insularity and fragmentation of reality. What incident drives both Mulholland Drive and Donnie Darko? A vehicular atrocity that sends the respective protagonists into a tailspin as their cocooned world is proven to be breachable.

Donnie Darko viscerally resonated with me in 2001. An awkward and creatively minded 22-year-old white male, I was the film’s ideal audience, sharing the protagonist’s feelings of estrangement and self-pity. Re-watching the film last month, at 37, reminded me of who I was and who I am, as I’ve grown to weigh my ideals and disappointments with a hopefully more accurate sense of social scale. Such is the mechanics of our emotional evolution with art. In 2001, Donnie Darko’s narrative somehow made perfect sense to me. In 2017, I’m less sure of the convoluted particulars and less patiently inclined to sort them out. At this point in my life, I’m drawn less to puzzle boxes than to a rapturous purity of empathy and aesthetic.

The additional exposition in the director’s cut of the film (included in this set) hardly helps with narrative clarity, though this version has a looser and scruffier expressionism that suggests the gnarly, angst-ridden teen horror-fantasy that’s struggling to escape the thicket of references to Rod Serling, Philip K. Dick, Stephen King, John Hughes, and others. In either version of the film, Kelly rarely finds a balance between the literal and the figurative. Kelly yearns for the poetic irrationality that David Lynch often conjures, yet he’s also ceaselessly attempting to make sense of his plot, with dialogue (and, in the case of the director’s cut, on-screen text) that revels in jargon about astral projection, alternative dimensions, and temporal loops.

Holding the film together is Kelly’s evocation of the 1980s as a lost and sad time that grows increasingly mythical in the memories of Gen Xers and older millennials, serving for these generations as an equivalent to the green light at the end of Daisy’s dock in The Great Gatsby. The American 1980s were eaten up with war and capitalism, but there was also music and movies capable of commanding much of the populace’s attention at once, as well as the birth of communal analogue wonders such as the video store. In the 2000s, we share a steroidal version of the same misery without the accompanying solace of physical community, as we now privately attend to our niches. Donnie Darko captures the pleasures of walking along a street with a pretty girl that you like, or of listening to Joy Division at a Halloween party. In 2017, we’re just as likely to text one another while parsing Spotify.

The film is also enriched by Jake Gyllenhaal’s performance as the titular hero, the troubled teenager who might die so as to stave off apocalypse, aided in his quest by a silly yet haunting monster rabbit, Frank (James Duval). At this point, Gyllenhaal hadn’t yet found his self-conscious, often mechanical sense of control and polish. His Darko is appropriately raw and unformed. There’s a powerful scene late in Donnie Darko where Kelly’s various instincts briefly harmonize, due in large part to Gyllenhaal. Sitting in a theater watching The Evil Dead, Frank reveals that he’s an adolescent underneath his scary façade, hurting like Darko, who regards this truth with anguish. Darko’s still learning that everyone has their own pain, that the world doesn’t revolve around him, though, in this case, it actually kind of does. Torment is universal, and, like Darko himself, is proven by Kelly to be unbound by time.

Both the theatrical and director’s cuts of Donnie Darko have been significantly refurbished, boasting a broader color palette than was visible in previous home-video editions. The blacks are particularly deep and rich, with a terrific new range of shadowy textures. Blue, a pervading color in this film’s visual scheme, is also more luxurious than before, and the whites are magnetically crisp, most notably in the otherworldly sequences of the director’s cut. There’s some softness in certain FX-heavy scenes that’s probably inherent to the source materials, but it’s appealing to the eye, as is the moderate level of graininess. The various soundtracks are subtly layered, especially on the director’s cut, which has aural effects that weren’t in the theatrical version, such as the underlying chirping of bugs in the opening scene, as well as new song placements. This restoration informs both versions of the film with a newfound sense of formal vastness.

With its strange blend of emotional directness and narrative murkiness, Donnie Darko has attracted an obsessive fan base determined to parse clues so as to uncover the film’s ultimate “meaning.” Richard Kelly has often appeared stymied over this meaning as well, having created an alternate director’s cut and a variety of supplementary materials that once appeared online to elaborate on the story. (The film’s inability to speak for itself is a problem that has clearly occurred to Kelly.) This beautifully produced four-disc set assembles the theatrical and director’s cuts of Donnie Darko together, while culling virtually any supplement of note to have been produced over the years, including audio commentaries, archive interviews, fan documentaries, and extensive deleted and alternate scenes. Even the box itself boasts a degree of obsessiveness: Tucked away in the Blu-ray sleeves are postcards (marked as letters to Roberta Sparrow, a character in the film) and a mini-poster, as well as a book featuring new interviews and essays.

The audio commentaries were recorded near Donnie Darko’s initial DVD release. In the track that Kelly recorded with filmmaker and friend Kevin Smith during the production of Southland Tales, for the director’s cut of Donnie Darko, Smith affectionately ribs Kelly’s anal retentiveness. Smith has never been more appealing than he is here, riffing with Kelly and getting the latter to discuss the film’s dense and ambitious sense of structure, song placement, and range of influences. Donnie Darko doesn’t wear its sense of purpose lightly, but it’s more intricate than even its diehard fans have probably discerned—a classic case of a first-timer wanting to make 10 movies in one. The other two commentaries (included on the theatrical cut) between Kelly and Gyllenhaal and Kelly and most of the remainder of the cast, respectively, are fun and jovial, but the track between Kelly and Smith is the keeper.

A casual Donnie Darko fan may greet this immense set with bafflement, wondering where to start. The best all-encompassing supplement in this set is a new feature-length documentary, “Deus Ex Machina: The Philosophy of Donnie Darko,” which guides viewers through the film’s entire conception, including the decisive moment when Drew Barrymore took the project under her wings as producer and co-star. One should also be sure to watch Kelly’s poignant and disturbing short film, The Goodbye Place, which boasts an eerie simplicity that’s so far eluded his features.

With this gorgeous and obsessive four-disc set, Donnie Darko fanatics may have found their ultimate bible, at last.

Ambulance Review: A Maximalist’s Thrilling Take on a Close-Quarters Predicament