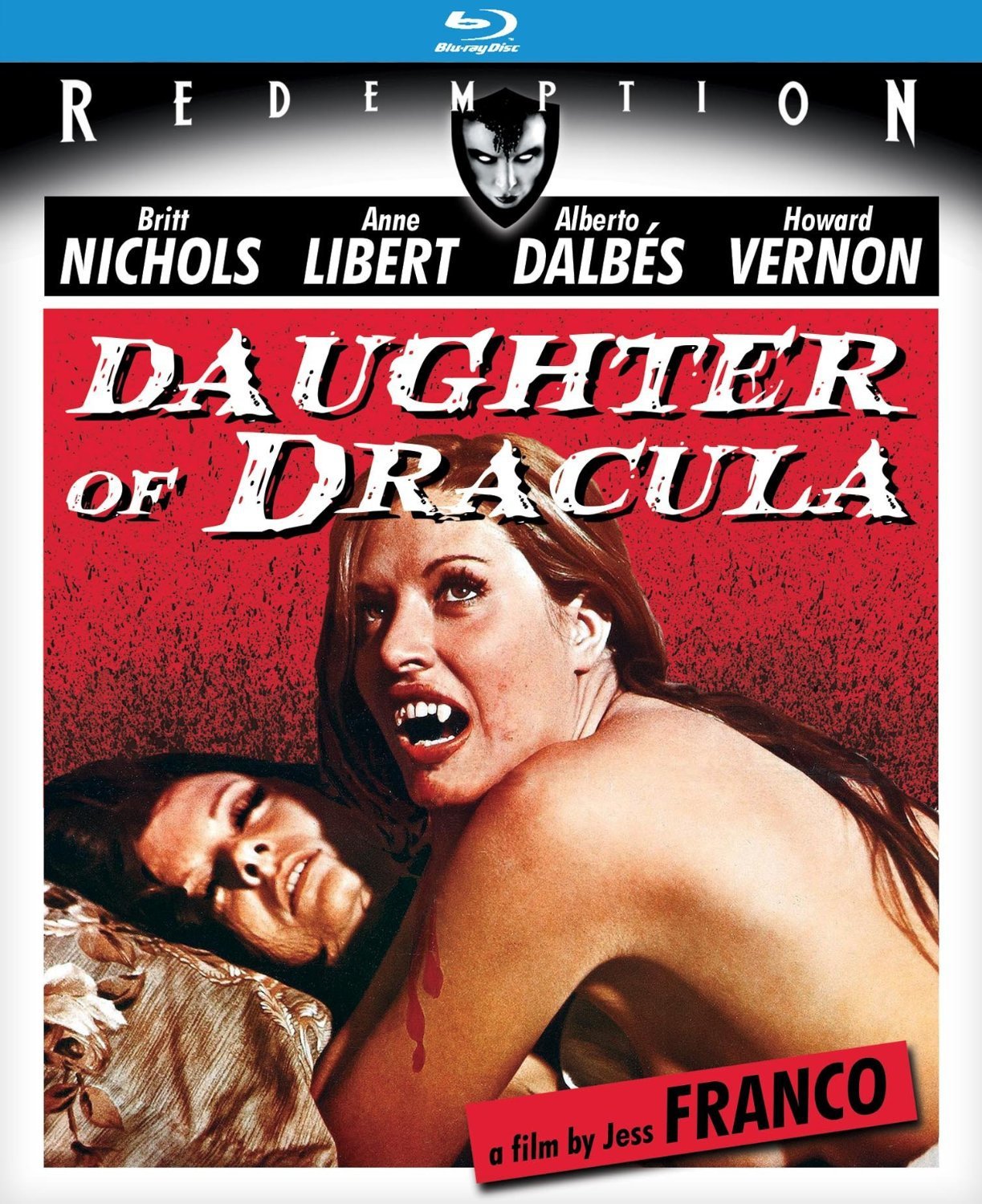 One of the astonishingly prolific Jesús Franco’s quickies, made on locations and utilizing actors involved in at least one other Franco production at the time, Daughter of Dracula proves to be a slapdash affair. The film never seems to decide whether it wants to serve as a virtual remake of Franco’s proto-giallo The Sadistic Baron Von Klaus, albeit giving the material an intriguingly distaff spin, or else merely wallow in the lesbian vampire of Vampyros Lesbos. Franco churned out films (approximately 200 in a career spanning seven decades) that can best be described as “fast, cheap, and out of control”—and the most effective among them have an absorbing dreamlike quality. But that only can be said of Daughter of Dracula in fits and spurts.

The prologue shows us a location—described in portentous voiceover as Dracula’s castle—that we’ll never see again before shifting to a seaside hotel where a young woman (Eduarda Pimenta) is stalked and attacked in the bathtub. Daughter of Dracula then cuts abruptly to the arrival of Luisa Karlstein (Britt Nichols) at a palatial chateau, dropping us into a charged family dynamic that makes little sense unless we’ve seen The Sadistic Baron Von Klaus. The mysterious family legacy that’s shared with Luisa by moribund Baroness Karlstein (Carmen Carbonell) leads her to a crypt occupied by none other than Count Dracula (Franco mainstay Howard Vernon), who, hilariously enough, remains casket-bound for the rest of the film.

That’s when Daughter of Dracula’s narrative lurches really start piling up. Adding to the overall confusion are further attacks on unclad women, subject to a rather fitful investigation led by Inspector Ptuschko (Alberto Dalbés). Secondary characters proliferate to provide possible red herrings, chief among them ivory-tickling Count Max Karlstein (frequent Franco composer Daniel White) and his amanuensis: amateur occultist Cyril Jefferson, played by Franco himself. There’s even a chanteuse whose act strangely morphs into a striptease for little reason aside from the obvious.

Still, two sequences stand out above the fray. The first combines, in delirious fashion, a piano recital and a lesbian love scene. The scene begins with Luisa at the piano, playing a pensive piece and discussing their childhood with her cousin Karine (Anne Libert). Luisa disconcertingly recalls the time she blinded a trapped bird with a needle. Then, suddenly, it’s Max at the piano, while Luisa and Karine undress each other upstairs. The same melancholy music bridges the crosscutting. The camera prowls the salon where Max performs his melancholy music just as it slides along the cousins’ entwined bodies. It’s a surprisingly virtuoso admixture: evocative, erotic, and disturbing all at once.

The second scene occurs in the film’s final moments. Cyril and his wife, Ana (Yelena Samarina), sit down to talk things out. She has recently provided an alibi for Max Karlstein, bringing their infidelity out into the open in the process. The moment is quiet and understated. There’s both bitterness and relief in Cyril’s acceptance of Ana and recommitment to the relationship. Granted, this was never going to be Bergman’s Scenes from a Marriage. Then again, neither the theme of adultery nor its sensitive handling are necessary to this narrative at all; they weren’t in the earlier film. Clearly, this moment meant something to Franco. And it’s a testament to his idiosyncratic approach to filmmaking that, even in the midst of an otherwise fairly unremarkable film, he can work in a few moments of real poetry.

Kino’s 1080p/AVC-encoded Blu-ray disc presents Daughter of Dracula in its original 2.35:1 aspect ratio. The elements show a lot of wear, with speckling throughout and a fair number of vertical scratches, but the colors are reasonably strong and vibrant, and details of costume and set design mostly clear—except, of course, when the image goes momentarily out of focus, a fault found in many of Jesús Franco’s zoom-reliant productions. The linear PCM mono track has plenty of hiss and crackle, but does fine by Daniel White’s score.

The main draw here is another comprehensive commentary track from Video Watchdog editor Tim Lucas. He covers every aspect of the production, with an unerring eye for the admittedly fetching locations, and provides a lot of information on the actors’ filmographies, as well as the place of Daughter of Dracula within Franco’s expansive body of work. He also pinpoints the film’s blurred generic trappings and argues that several actors credited as appearing by IMDb aren’t even in the film. Other extras include a few minutes’ worth of “safe” footage, wherein the actresses largely manage to keep their clothes on, though, if that’s your particular cup of tea, I can’t imagine what you’re doing watching Daughter of Dracula in the first place. The surprisingly lengthy theatrical trailer is pretty hilarious, waxing poetic and prurient with equal abandon.

Of interest mostly to the complete Jesús Francophile, Daughter of Dracula gets an attractive HD transfer and some essential context from Kino’s Redemption Films line.

Blu-ray Review: Mark Robson’s Valley of the Dolls on the Criterion Collection