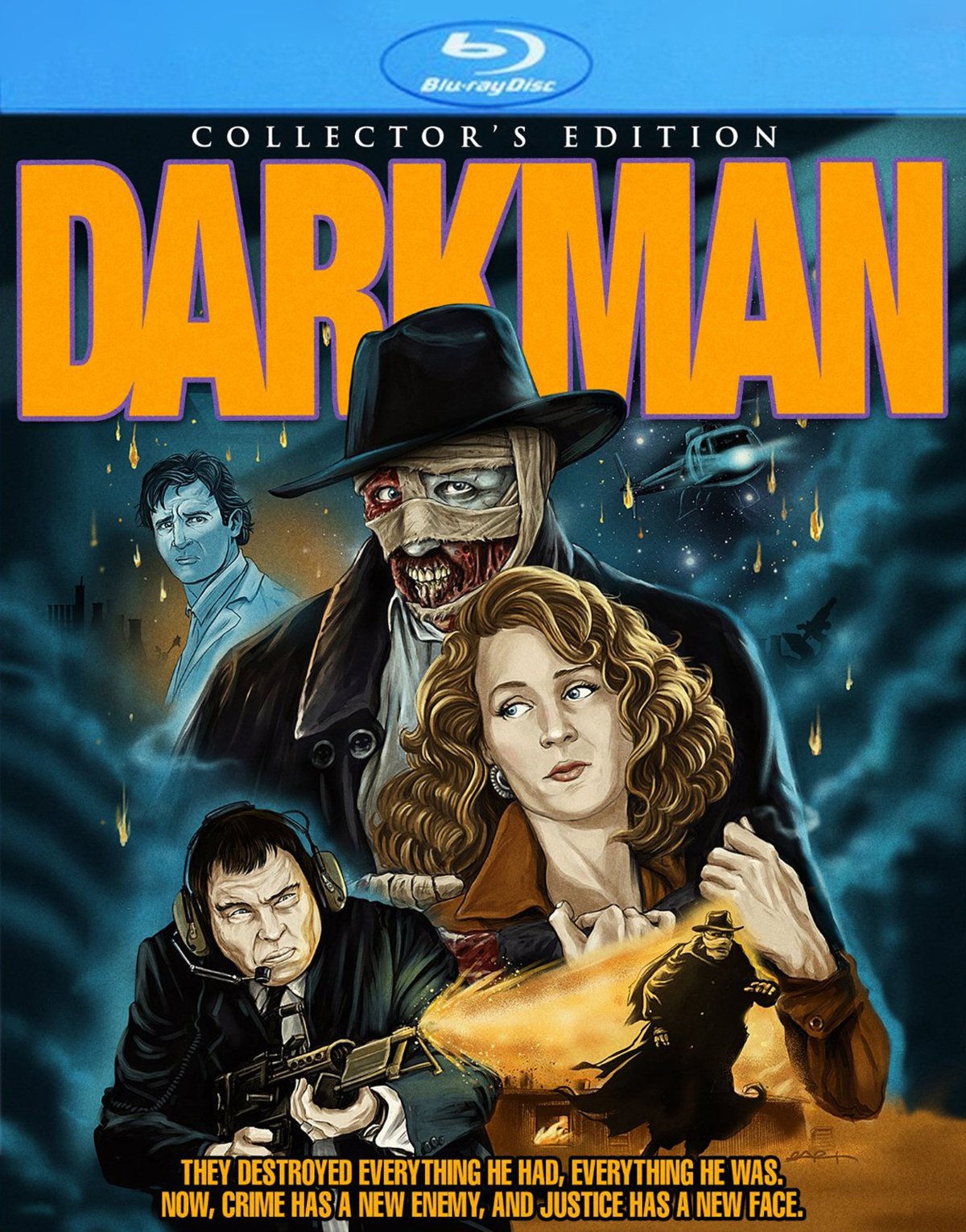 Director Sam Raimi’s early films have an innocence that’s simultaneously bracing and weird. The Evil Dead, Evil Dead 2, Crimewave, Darkman, and Army of Darkness are violent comedic horror thrillers with images of dismemberment, disfigurement, and bondage that are staged in an earnest slapstick manner that’s traditional of many cartoons. In different hands, that unusual juxtaposition of subject matter and tone might carry a psychotic charge reminiscent of certain Paul Verhoeven thrillers, but Raimi’s films are generally devoid of any of the horror genre’s potential for metaphorical kink, obsessiveness, or even the simplest of subtexts. The signature camera pyrotechnics are initially amusing, but they’re seriously the only thing likely to linger in one’s memory once the end credits have rolled.

That slightness initially suits Darkman, particularly retrospectively, which suggests what might happen if a classic Universal Studios monster, most explicitly the Phantom of the Opera or the Mummy, were to be plopped in the middle of a comic book’s crime-ridden metropolis and inadvertently rendered a morally murky hero in the key of the Shadow. One can imagine the pomposity of the big-studio treatment of such a premise in the current era of the superhero movie as humorless, impersonal, gentrified, Christ-obsessed bildungsroman, but Raimi approaches his film as a funhouse, which serves to refreshingly divorce the story of its potential for pretentiously weighty mythos while providing little else to fill the ensuing vacancy left in said weight’s absence. Every character is an action figure or a monster ripe for springing nothing more than an escalating variety of “boo” effects.

At its best, Darkman cheekily affirms that Raimi had yet to fully work through the hyper-kinetically parodic Loony Tunes jones that coursed through his Evil Dead 2. The film is full of amusing little touches, many of which serve to tweak the grandly self-pitying melodrama inherent in Darkman’s knowingly ludicrous arc, and Liam Neeson invests the title role with a subtly funny, even touching, straightforwardness that admirably resists condescension. (Many actors of his gifts and stature would make a distasteful show of their superiority to the material.) But Darkman still eventually wears you down with its defiant superficiality, as its playfulness is absolutely all there is to it, reminding one that a Loony Tunes approach is best suited to an abbreviated running time. There’s little of the grandeur or beauty or irony of the best fallen monster movies or superhero films, and absolutely none of the sick brute force that enlivened Verhoeven’s similarly plotted RoboCop. Like most of Raimi’s work, Darkman is the kind of film that leaves a cinephile craving another movie right away; it’s diverting, but you won’t feel as if you’ve quite had a proper meal.

Unfortunately, the producers of this Blu-ray weren’t able to arrive at an image quality that properly balances the softness one associates with certain 1990s films with the enhanced clarity that’s presently, if sometimes unreasonably, expected of contemporary presentations of movies of varying ages. The clarity of the image often appears enhanced and, in other instances, the depth of field is shallow to the point of mildly shortchanging background information. The colors are generally vivid, though there’s an excessive brightness to certain parts of the picture that’s unappealing and presumably unintended. The sound mixes fair considerably better: Both are logically emphatic of the big effects, such as Danny Elfman’s memorable gothic opera score and the constant explosions and rat-ta-tatting of gunfire, but there’s also an underlying clarity of the subtler effects that provides nuance and fullness.

The various interviews are consistently enjoyable and informative, as the cast and crew project a legitimate pleasure in remembering their work on a film that’s become a treasured cult item, particularly for horror nerds. Plenty of fun anecdotes are provided, such as the portrait that Frances McDormand provides of famously living with a group of up-and-comers that included directors Sam Raimi and Joel and Ethan Coen. The audio commentary with cinematographer Bill Pope is rich in details pertaining to the special effects, which are delivered with the clear belief that practical effects are still richer and more suggestive than CGI—a sentiment that’s traditionally and wonderfully explicit in all of Shout! Factory’s horror releases. The only disappointment is the pointed absence of Raimi, who created Darkman after his inability to get the rights to several actual comics and who would eventually, of course, get to play in the Marvel Studios sandbox officially with Spider-Man.

The supplements and sound mixes are solid, but this unevenly visually tweaked Darkman leaves quite a bit of room for image improvement. Proceed with tempered expectations.