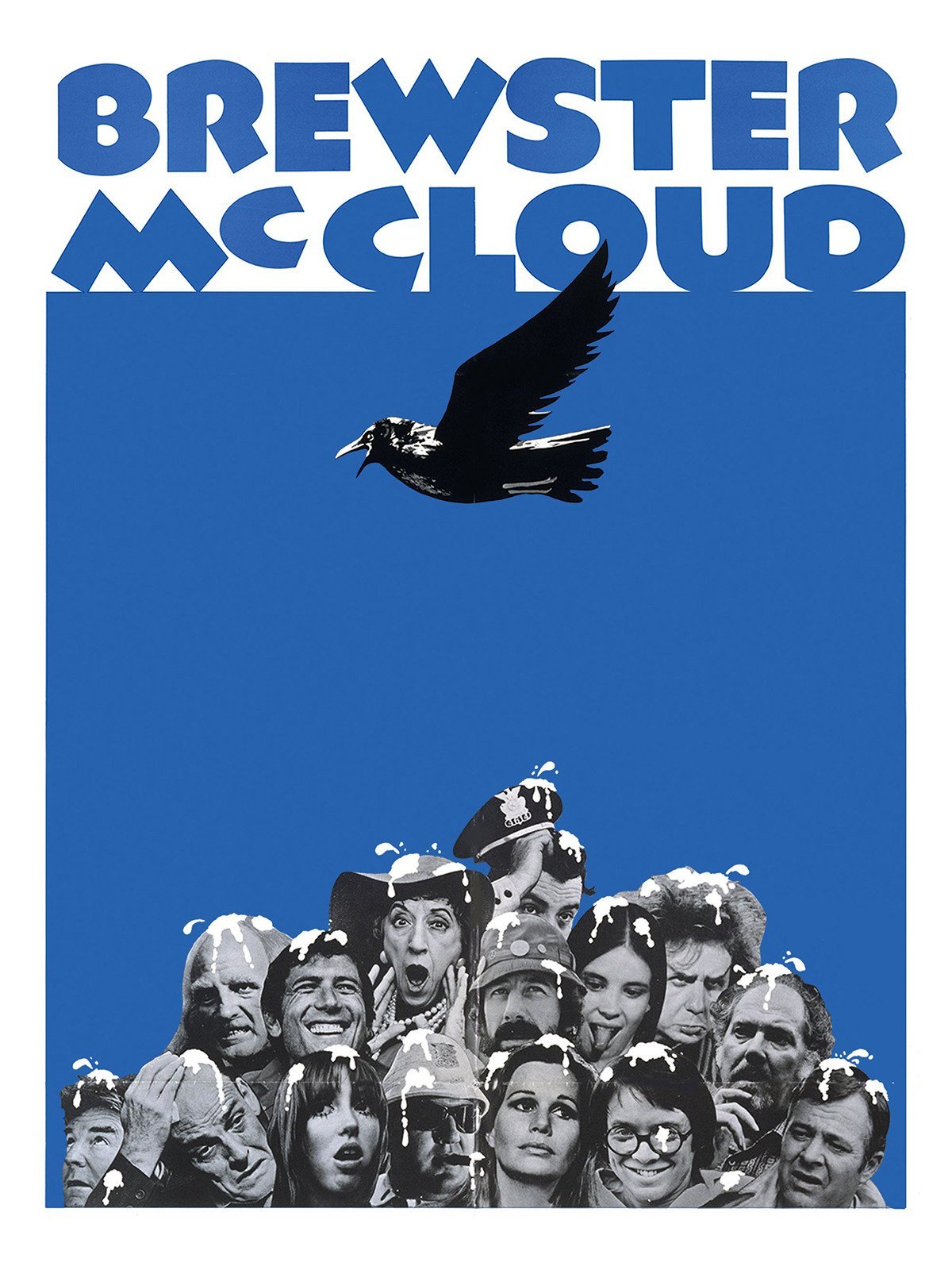 Even in as unorthodox a zoo as Robert Altman’s oeuvre, Brewster McCloud remains a very kooky specimen indeed. Sandwiched between M*A*S*H* and McCabe & Mrs. Miller, this curio amply showcases the intrepid director’s willingness to gamble away the carte blanche from his previous box office hit on an intransigently obscure and personal freak-out. The multileveled modernist’s unruliness starts right off the bat. That the Wicked Witch herself, Margaret Hamilton, is at hand to usher in the credits (twice) with an off-key rendition of “The Star-Spangled Banner,” is not just an acerbic joke on a beloved classic, but also a reminder that Altman here is out to transform and derange that movie’s coming-of-age reverie to fit the contemporary Oz of Houston circa 1970.

Brewster (Bud Cort) is the baby bird nestled in the Houston Astrodome, a young loner who, with his round specs and striped shirts, looks like a larval, vaguely malevolent version of the Where’s Waldo? nerd. His ambition is to take flight with the pedal-propelled thingamabob he’s been piecing together in his basement hideout; his guardian is an enigmatic blonde (Sally Kellerman) whose white trench coat cloaks the (mama falcon? fallen angel?) wing scars on her shoulder blades. Be mean to Brewster at your own peril: The community’s resident assholes, from Stacy Keach’s gnarled millionaire to Bert Remsen’s loudmouth bigot, keep turning up strangled and decorated with bird shit following run-ins with him. Tracked down by “super cop” Frank Shaft (Michael Murphy in a send-up of Steve McQueen), ogled by libidinous colleague Hope (Jennifer Salt), and seduced by dippy tour guide Suzanne (Shelley Duvall, debuting in mile-long eyelashes), Brewster works toward the loss of his naïf-hood and a rendezvous with the heights.

Reputedly one of Altman’s favorites of his own films, Brewster McCloud has the charm and self-indulgence expected from a project deliberately made to be a cult classic. “To isolate the dream” is the goal, the non sequitur is the method: the often counterintuitive wackiness encompasses a carnival out of Fellini, Salt noisily rubbing one out to scrawny Cort doing chin-ups, and Rene Auberjonois as “The Lecturer,” whose increasingly avian speeches drag Ionesco and Dusan Makavejev into the mix. What saves the film from curdled, wise-ass whimsy is the control Altman brings to the freewheeling material, to say nothing of the undercurrent of despair that keeps its absurdism bold and beguiling. A counterculture vaudeville revue and a fairy tale of sexual awakening, it perhaps survives most saliently as a parable for artistic riskiness from a filmmaker who, no less than his Kid Icarus protagonist, understood how close soaring and crashing could come of each other.

Pulled from the Warner archives without any restoration, the disc boasts a surprisingly robust image. The sound nicely captures Altman’s trademark hubhub—compounded by car chase screeches and avian squawking.

“Man is not a bird,” posits Dusan Makavejev. Oh but he is, Robert Altman retorts.