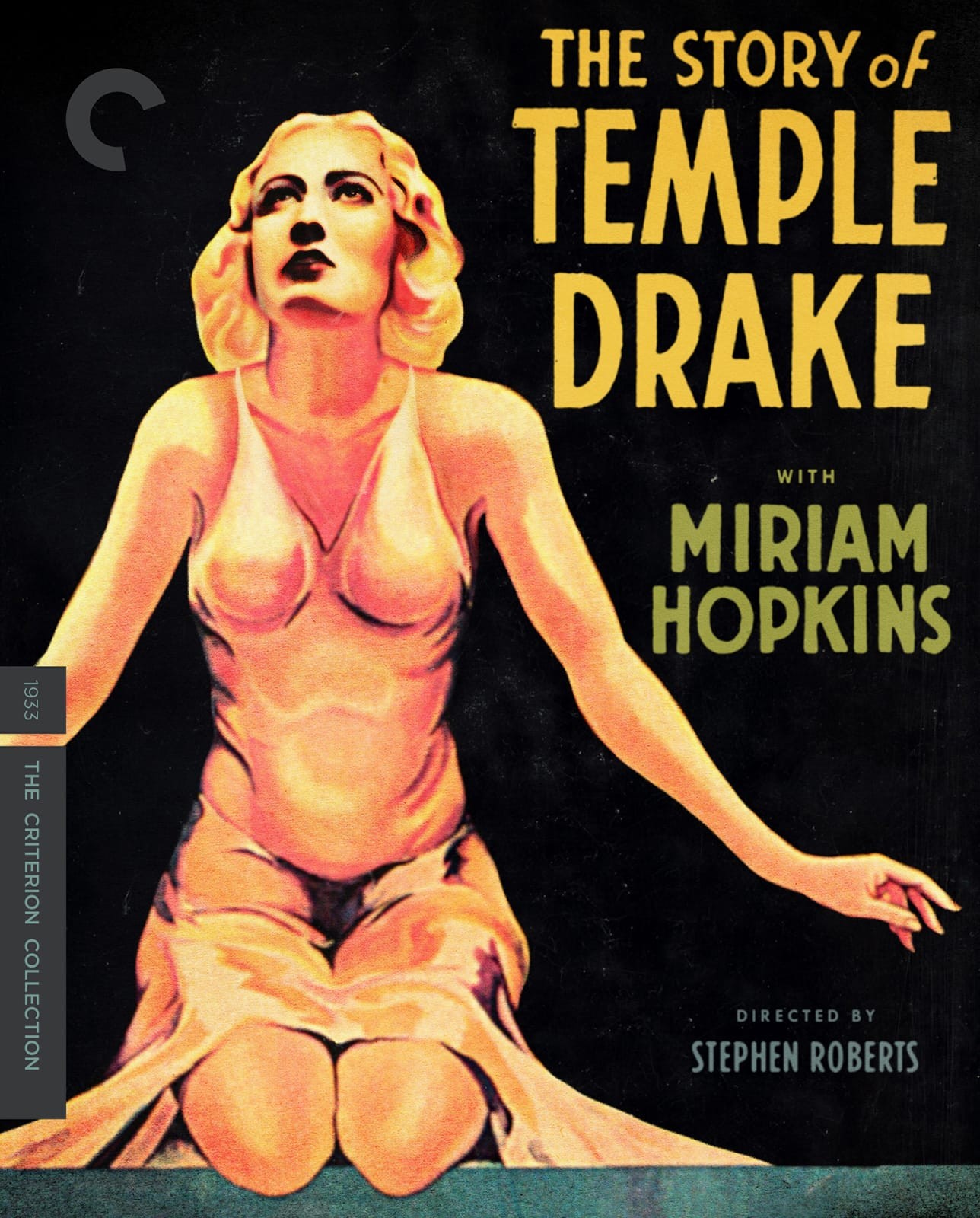 The first glimpse we get of the protagonist of Stephen Roberts’s The Story of Temple Drake is of her left arm grasping the inside of her home’s front door. She’s standing outside, mostly out of sight to the camera, exhibiting equal measures of coquettishness and caution as she playfully fends off a companion who’s getting too frisky with her. It’s a striking image that positions Temple Drake (Miriam Hopkins) as a woman divided, perpetually torn between desire and shame. Temple later tells the most serious of her suitors, Steve (William Gargan), a local lawyer who sees only the good in her, that it’s like she has “two me’s”: one that would marry him on the spot and the other too indecent to put into words.

Temple’s wealthy, powerful family has granted her the privilege of walking the thin line between flirt and floozy without consequence, aside from nearly everyone in town, including Steve’s gossipy Aunt Jennie (Elizabeth Patterson), talking about her perceived bad streak. When a drunken joy ride with the reckless Toddy (William Collier Jr.) ends in an accident that leaves Temple stranded at an eerie, ramshackle plantation house turned speakeasy, the film appears to be setting up a simplistic cautionary tale wherein the rich, carefree teenager gets her comeuppance from the lecherous, drunken men she suddenly finds herself surrounded by.

But unlike William Faulkner’s Sanctuary, from which Roberts’s film was adapted, The Story of Temple Drake takes a sympathetic view of its heroine, remaining morally ambiguous about her behavior and fixating more on her attempts to avoid and later cope with traumatic events than on the depraved horde of men who victimize her. Roberts retains Faulkner’s uniquely Southern Gothic sensibility, but gone are the misogynistic overtones, suggesting that she was both “asking” for her eventual rape and came around to liking her rapist’s company.

Roberts, with the help of cinematographer Karl Struss, infuses the derelict mansion with an alarming sense of terror, employing angular compositions and expressionistic lighting that would later define the look of film noir and suspenseful music that would have felt equally at home in a Universal monster movie. Where the people in both her civilized town and in this sleazy booze den see Temple as either an object of desire or scorn, Roberts more compassionately presents her as a victim of her own carelessness and, even more so, of the ruthless objectification of men. If Temple becomes something akin to a “final girl” from a horror film, the slick yet terrifying gangster, Trigger (Jack La Rue), who tracks her like prey from one room to the next, is its lurching, irrepressible monster.

Even after Trigger rapes Temple, she remains his prisoner, left in a near-catatonic state as he drives her to a Memphis brothel where he attempts to persuade her into cherishing him. In a stunning and deeply unsettling series of shot-reverse-shot zooms, Temple pleads with him to leave her alone, and as his face fills the screen, he replies, smirking, “I ain’t hurt you none.” It’s this type of cyclical abuse, with violence followed by gaslighting that often leads victims of rape to remain silent, fearing both the judgment of society and facing their own shame.

When the film shifts tones again in the final act, from horror-tinged noir to courtroom drama, Temple is again divided, this time between her senses of justice and shame, finding herself as the only person who can exonerate an innocent man charged of a murder she saw Trigger commit. And it’s through her final act, when she speaks publicly of her rape and abuse, that she transforms from victim into hero—not merely because of the selflessness of her act, but through her willingness to openly discuss her abuse. It’s a courageous decision that suggests a conquering of the fear and shame that’s long haunted her, reinforced by Steve’s comment to her father to be proud of her. The scene exudes an extraordinary empathy, yet as Steve carries the seemingly lifeless Temple out of the courtroom after she faints, one is left with the lingering doubts of whether anyone else in attendance will grant her the same courtesy.

If the Criterion Channel’s recent pre-code Barbara Stanwyck collection is any indication, the Criterion Collection is finally paying closer attention to an oft-neglected period of Hollywood filmmaking. With The Story of Temple Drake, the distributor has finally dipped their toes into the physical release of a pre-code drama and the results are spectacular. Both the tinniness of dialogue and the crackles and pops heard throughout silent stretches of many an early sound film are all but completely absent here. In comparison to the clean, precise audio track, Karl Hajos and Bernhard Kaun’s score sounds a tad meek, though frequent appearances of wind and thunder in the film’s middle section are effectively forceful in filling out the soundtrack. While Criterion’s source is only an HD, rather than 2K or 4K, restoration, the image boasts an impressive sharpness and the ample, even distribution of grain lends The Story of Temple Drake a pleasing softness that complements its woozy, off-kilter tone. The contrast is also quite strong throughout, with whites arising from the frequent backlighting of actors and objects exhibiting an eerie glow and inky blacks impressive throughout, particularly in the noir-esque nighttime sequences at the speakeasy.

None of the three new extras that Criterion includes on this disc clock in at over 20 minutes, but each provides a unique perspective on Stephen Roberts’s offbeat film and Hollywood’s brief but remarkable pre-code era. Film critic Imogen Sara Smith nimbly traverses The Story of Temple Drake’s murky morality, as well as the enigmatic qualities that make Temple at once vexing and profoundly human. In discussing the pre-code era’s general ambivalence toward modern females and their increasing sexual freedoms, Smith also touches on the slyly subversive content that rose to the fore in Hollywood films of the early 1930s. Critic Mick LaSalle also approaches the revolutionary content of pre-code films, situating them as a reflection of a generation disillusioned with institutions of power. The final feature, a conversation between Matt Severson and cinematographer John Bailey, finds the two men perusing Jean Negulesco’s highly stylized, almost surreal, storyboards (mostly of the film’s horrific rape scene), which convey a distinct sense of the film’s tone as well as merely laying out shot compositions. The package is rounded out with an essay by Geoffrey O’Brien, who teases out the similarities and differences between the film and Faulkner’s controversial novel.

Criterion’s long-awaited foray into pre-code dramas shines a spotlight on a strange and emotionally rich gem too often reduced to a titillating oddity that provoked the stricter enforcement of the Hays Code.