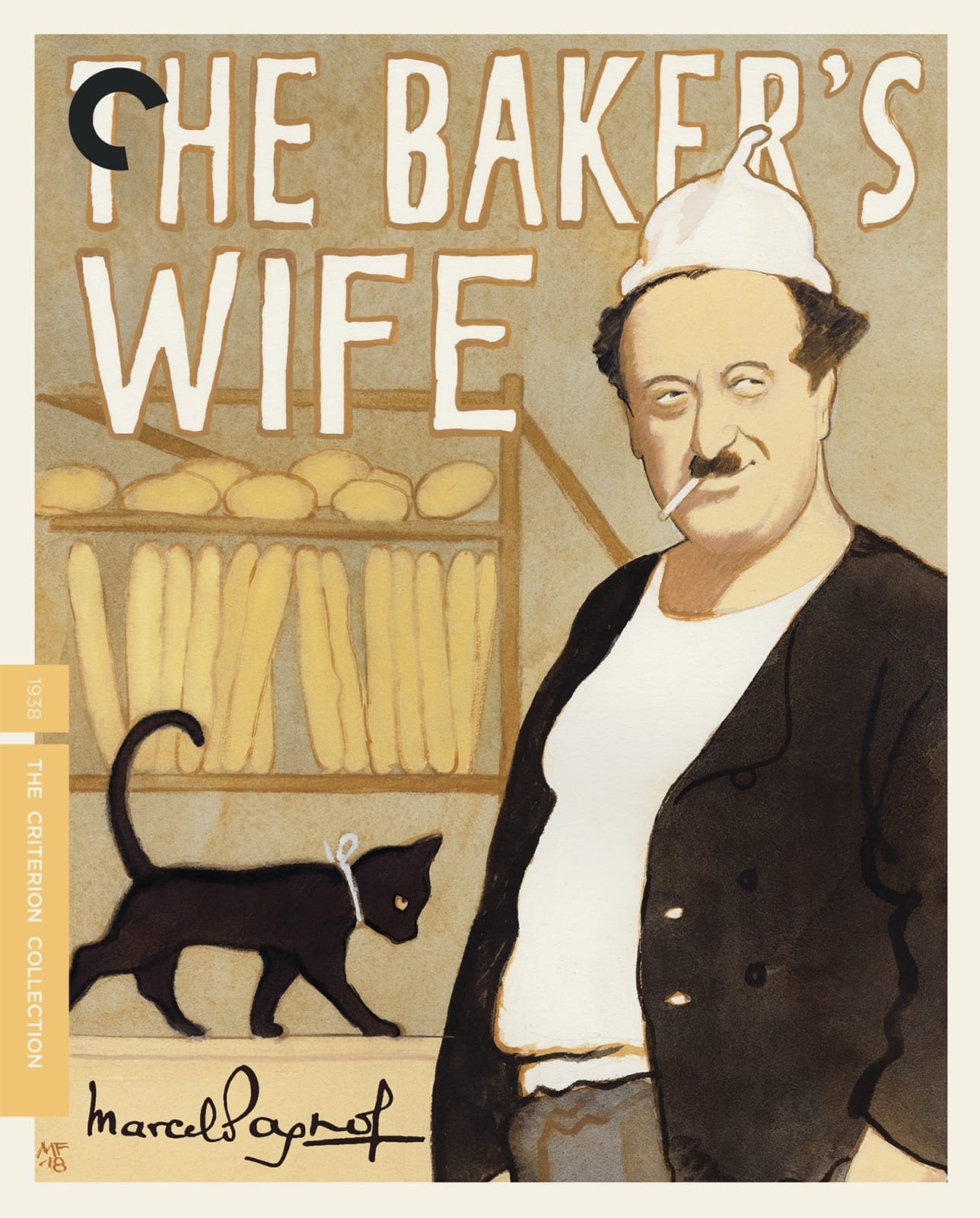 Marcel Pagnol’s The Baker’s Wife, a breezy, comical, and multifarious portrait of French rural life, is centered on the cuckolding of a baker, Aimable Castanier (Raimu), who’s recently arrived in Le Castellet, a small village in the south of France, with his beautiful and significantly younger wife, Aurélie (Ginette Leclerc). After she runs off with a hunky Italian shepherd, Esprit (Jean Castin), her absence forces the townspeople to unwittingly set aside their long-standing grievances and animosity toward one another. Their infighting is replaced by a ceaseless concern for the loveable sadsack Aimable, though less out of any genuine sympathy than because he’s left too shocked and heartbroken to bake any more bread. And nothing, apparently, is more effective as a uniting call to action in a French village than cutting off its daily supply of carbs.

In this opening act, Pagnol leisurely introduces a diverse array of villagers, including Aimable and his wife, all of whom the filmmaker lovingly mocks, slyly playing up each of their idiosyncrasies. Yet these portrayals are rendered with such precise regional flair that they come across as neither mean-spirited nor overly broad. In fact, Pagnol’s representation of the townspeople, and Le Castellet, occupies the middle ground between caricature and psychological realism, just as the film’s tone seamlessly fluctuates between outright farce and emotionally grounded drama, never firmly settling in either direction.

In successfully striking this tricky tonal balance, Pagnol remains sharp in his broader social commentary, while retaining a compassion for his characters. His most forceful critique concerns the collision of religious zealotry and both secular humanism and hedonism—a battle that played out all across France in the first half of the 20th century. The town’s young priest (Robert Vattier) first chastises the village school teacher (Robert Bassac) for saying that Joan of Arc only thought she heard the voice of God, then scolds the powerful yet debauched marquis (Fernand Charpin) for living in sin with four women “of low virtue,” whom he fails to pass off as his nieces. Yet, even this most stern servant of God, whose initially draconian proclamations are fodder for satire, reveals a warmth and sense of companionship with the teacher when, later on, the two men set out to find and bring Aimable’s wife back to him.

A number of other small bits of local color—including an amusing, ongoing squabble between two neighbors, Barnabé (Marcel Maupi) and Antonin (Charles Blavette), over one man’s tree casting a shadow over a garden on the other man’s property—fill out the narrative of The Baker’s Wife, breathing additional life into Pagnol’s seriocomic representation of village life. But Aimable, who’s positioned as something of a tragic clown, ultimately serves as the beating heart around which all the townspeople and proceedings revolve.

Raimu’s emotionally layered performance lends Aimable a surprising sense of dignity amid the embarrassing aftermath of Aurélie’s disappearance. The actor’s impossibly malleable face captures all of the subtleties of the baker’s pain and sorrow but also shifts seamlessly into exaggerated comedic expressions and gestures as the man’s foibles are laid bare in front of the whole town. This blending of naturalistic and vaudevillian modes of performance is particularly evident in the masterful scene where Aimable becomes progressively more drunk, belting out a ridiculous Italian song to an array of entertained onlookers, while still refusing to fully accept his wife’s disloyalty. His cognitive dissonance, resonant in large part to Raimu’s uncanny ability to chart Aimable’s severe emotional instability, generates substantial pathos while also remaining riotously funny in its rising absurdity.

Through his deeply felt melancholy, Aimable never devolves into a pathetic character, but due to his relentless obliviousness, he never becomes wholly sympathetic either. His seeming indifference to sex hints at his possible impotence, while his tendency to get completely wrapped up in his work and remain willfully ignorant of his young wife’s needs seems to all but invite willing suitors to sweep her off her feet. When Esprit serenades Aurélie near the beginning of the film, Aimable foolishly attributes this blatantly flirtatious behavior to the shepherd being impressed with his bread. And when his wife later goes to bed, after kissing Esprit, without so much as looking at her husband, Aimable assumes it’s because she’s worrying about the bread to be made the following morning. Ironically, bread, too, is involved in Aurélie’s initial breach of marriage, when she provocatively drops an especially phallic loaf of bread into Esprit’s sack before looking up at him in a coquettish glance.

Because Pagnol never reveals anything of Aurélie beyond her carnal lust, giving her only a few dozen lines throughout the entire film, The Baker’s Wife’s beloved ending could easily be read as a conservative, even misogynistic, celebration of a woman being put in her place. And while it undeniably is that to some degree, Aimable’s blatantly sexist remarks—directed at his female cat, Pamponette, though understood to be an unconscious denigration of Aurélie—are counterbalanced by his profound joy at her arrival, evidenced by his initially sweet tone and the heart-shaped loaf of bread he leaves out for her.

This fractured response of pure elation and repressed, unacknowledged anger is really the inevitable byproduct of Aimable’s consistent obstinacy in confronting his wife’s deception, an entanglement of ego and id. Even upon hearing that Aurélie returned to town on horseback, the baker, almost compassionately, remarks that “she’s done a lot of riding since yesterday.” It’s a comment dripping with obvious sexual overtones, yet it’s spoken with the naïveté of a man who can’t allow himself to believe the worst of his wife. It’s certainly not the healthiest psychological approach to marriage, but Pagnol and Raimu spin his neurosis into comic gold in The Baker’s Wife, and present, with pathos and empathy, the redemption of a marriage as a unifying force in a contentious but tightly knit rural community.

Criterion’s transfer of a new 4K digital restoration is flat-out stunning. The image is crisp, with no remnants of debris or damage, but is balanced with an ample amount of film grain, which helps to retain the soft, textured look of celluloid. The contrast is strong, offering not only deep blacks, but an impressive range of blacks and grays. A remarkable amount of detail is found throughout the frame, with the intricacies of facial expressions revealing themselves often (particularly crucial in the many close-ups of Raimu’s vivid emotional articulations) and the pastoral beauty of the film’s location shooting in the south of France evident in nearly every scene. The uncompressed audio is evenly mixed and well-balanced, capturing the cacophony of village life without sacrificing any clarity in the dialogue tracks.

Marcel Pagnol scholar Brett Bowles’s selected-scene audio commentary consists of three 11-minute segments, each efficiently unpacking the film’s gender politics, as well as its satire of the ideological battle between the Catholic church and the secular left. Bowles provides further depth to the cultural context surrounding The Baker’s Wife by placing it within the long-running French folkloric tradition of stories about bakers and their wives. An excerpt from a 1966 interview with Pagnol for the French TV series Cinéastes de notre temps finds the director opening up about the controversy around his statements from the early 1930s when he said silent film was dead and discussing why he feels he was often despised by film and theater critics alike. “Memories of The Baker’s Wife,” a 1976 news program that includes a visit to La Castellet, approaches the film from a more personal and regional perspective, building up to a surprisingly emotional screening of the film, attended by villagers, many of whom served as extras in the film, and a few of the surviving actors. The package is rounded out with a brief introduction by Pagnol and an essay by film scholar Ginette Vincendeau that delves into the film’s archaic sexual politics, Pagnol’s knack for capturing regional details of the south of France, and the subtleties of Raimu’s central performance.

Criterion’s release of Marcel Pagnol’s bucolic comedy classic boasts a stunning transfer and a modest but enlightening selection of extras.