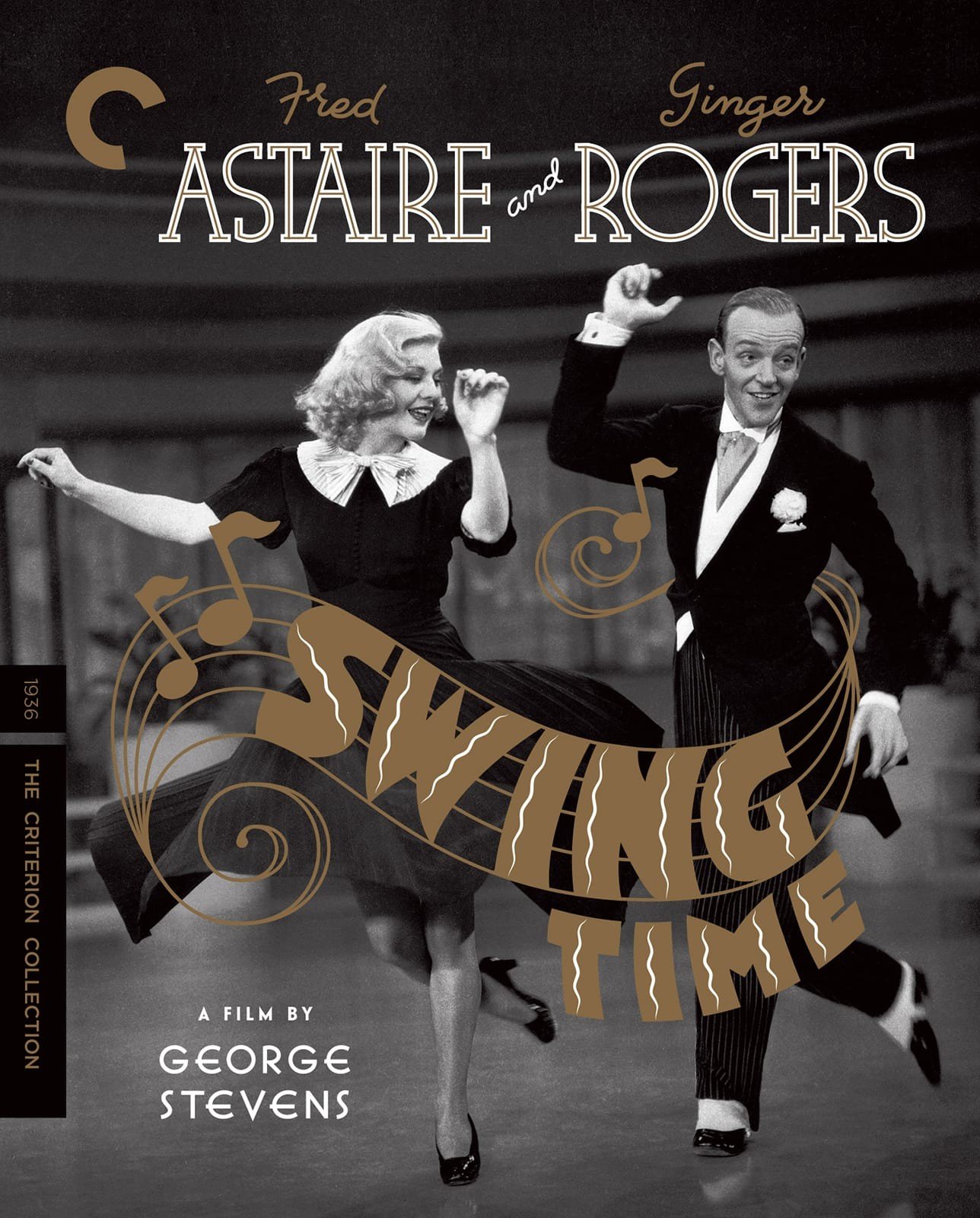 The maddening joke of 1936’s Swing Time is the effort it takes for Fred Astaire to dance with Ginger Rogers. Director George Stevens and his various collaborators—including screenwriters Howard Lindsay and Allan Scott and legendary songwriters Jerome Kern and Dorothy Fields—knew that the audience wanted to experience the bliss of watching one of cinema’s most ideally matched pairs move. But as romantic comedies continue to teach us, part of the pleasure of coitus resides in interruptus. Astaire and Rogers are icons who must be first humbled by the strictures of three-act plotting, which comes to mirror the petty irritations that stymie our own lives. In this context, an Astaire and Rogers duet isn’t only technically audacious, it suggests catharsis—a leap from the banal everyday into transcendence.

Swing Time has some of Astaire and Rogers’s mightiest set pieces, which are intertwined to reflect their characters’ evolving relationship. Early in the film, Lucky (Astaire) tricks Penny (Rogers) into believing that he can’t dance, showing up at the institute that employs her pretending to be a klutz. She tries to teach him a three-step move, inspiring him to tease her with pratfalls. (Astaire falling over is more graceful than most of us dancing.) When he finally decides to turn on the juice, he twirls Penny with peerless precision to the number “Pick Yourself Up,” perfecting the three-step move, their bodies gliding through the dance hall like pendulums as they intuitively bridge swing with tap, polka, and ballroom dancing.

And as Lucky and Penny dance, a farce blossoms into romance, and a recurring pattern is subtly established. The swing gesture of this routine, with Astaire and Rogers alternately twirling one another and performing intricate solos, is laced into the subsequent numbers. Many dances also end with the duo spinning off a given stage, which comes to signal either the salvaging or the dissolution of Lucky and Penny’s romance.

This number is even more exhilarating for the fact that it takes the film nearly 30 minutes to unleash it. In the first act, Stevens and his collaborators build a magnificent tension, teasing the audience. For an Astaire and Rogers film, Swing Time has an unusually involved, almost free-associational plot that suggests what might happen if every 1930s-era screwball comedy and crime caper had been thrown into a mixer. At the film’s opening, Lucky is to be married to Margaret (Betty Furness), which inspires Lucky’s fellow song-and-dance men to stage a remarkably mean-spirited ruse that ruins the ceremony. Trying to patch things up with Margaret’s father, Judge Watson (Landers Stevens, the director’s father), Lucky promises to go to New York City and make a man out of himself, which the judge values at $25,000. The song-and-dance men also screw up this plan, and Lucky hitches a ride on the back of a train, clad in tux, with his Sancho Panza-like friend, Pop (Victor Moore), in tow.

Scene by scene, the plot makes little sense, and at times this seems to be a deliberate, and effective, means of deriving comedy. The ease with which Lucky changes the judge’s mind over an arbitrary figure is resonantly funny, evoking the patriarchy with which Margaret and especially Penny must contend, and the judge’s hypocrisy is capped off with a sharp sight gag: a portrait of the man, initially frowning, is smiling once father and suitor have brokered a deal. This notion of unfairly wielded male power is revisited soon again when Penny reports a theft to a cop, who sides with the well-dressed male perpetrator, Lucky. And the plot continues to pivot on elaborate, also intertwined deceptions, in which Lucky and Penny must appeal to influential and unappealing men so that they may dance. At times, Swing Time may remind contemporary viewers of a video game, in which prized footage must be “unlocked.”

The elegance of Stevens’s direction is most evident in the attention that’s paid to the characters even in the film’s most ludicrous stretches. Lucky, Penny, Pop, and Penny’s friend, Mabel (Helen Broderick), are moving archetypes that embody the fantasy of America as a place where people can pull themselves up by the so-called bootstraps, conning their way into the upper echelons of society—an especially appealing fantasy during the Depression, when the screwball comedy’s conventions were cemented. Stevens spryly stages Lucky and Penny’s courtships and breakups, though he doesn’t give these scenes the subterranean emotional charge that an Ernst Lubitsch might have. Stevens values speed, racing through the script to get to the film’s reasons for existing, and the scruffiness of the romantic comedy contrasts likeably with the mathematical brilliance of the dance sequences.

For most films, “Pick Yourself Up” might be a show-stopping climax, but for Swing Time it’s the aperitif for set pieces of escalating intensity, in which Astaire and his choreographer, Hermes Pan, stretch the boundaries of their formalist imaginations. “Waltz in Swing Time” suggests a furious riff on “Pick Yourself Up,” with Astaire and Rogers elaborating on the latter’s swing motif with more pointedly syncopated solos that morph into duets. “Bojangles of Harlem” stops the film in its tracks, opening with nasty iconography as a prop modeled after a minstrel version of, presumably, Bill Robinson opens to reveal Astaire in blackface, presiding over a throne with giant legs and feet protruding out from him.

What follows is one of the most astonishing dances in the history of cinema, in which Astaire moves with 24 chorus dancers, who break up into trios before reuniting in a single vast line, allowing Astaire to partner with all of them simultaneously before moving on to a different set piece in which he out-dances a trio of shadows of himself. In these shockingly obsessive and insular sequences, Astaire pushes his co-stars aside to plumb the outer reaches of his own talent, and his angular, demonic racial caricature has undeniable force.

For a while, “Lucky” is forgotten, as Astaire is channeling, probably both intentionally and inadvertently, the perverse America that resides underneath the screwball musical’s Horatio Alger myths. And Astaire’s self-absorption is only partially exorcised by “Never Gonna Dance,” in which Lucky attempts to win Penny back on a deserted stage with a double winding staircase, their movements disconnectedly echoing one another’s in a haunting physicalizing of loneliness and heartbreak. At the end of the song, they reunite for a pained spinning gesture that explodes the emotion of the set piece, visualizing a failed stab at reconciliation.

Astaire and Rogers’s dances are as difficult to evoke in theory as jazz, as both arts can be described in technical terms that fail to honor their profound emotional power. Astaire holding Rogers in his hands and arms suggests a grace for which many of us yearn—an ability to fully express a sense of belonging or of disenchantment with a lover. The plots of Astaire and Rogers’s films, though often amusing, are irrelevant, aside from serving as a contrasting mechanism in relation to the dances. As actors, Astaire and Rogers are tasked with performing formulaic romantic melodramas; as dancers, they embody the deepest and most ineffable, beautiful, and disruptive stirrings of the soul.

The image here is often pristine, particularly in the wide shots of the fabulous sets. In these compositions, the blacks are rich and the whites really pop. Facial textures are occasionally soft and the details of the costumes are sometimes a bit vaguer than one would prefer, though neither of these issues are deal breakers. The monaural soundtrack, however, is positively dynamic, rendering the Dorothy Fields and Jerome Kern songs (all now standards of the American songbook) with piercing clarity and nuance. The same can be said of the presentation of the score at large, as well as, perhaps most importantly, the visceral machine-gun tapping of Astaire and Rogers’s shoes.

This Criterion Collection’s release of Swing Time balances archive supplements with new features, providing a rich examination of both the technical marvels and the social implications of Stevens’s film. A 1986 audio commentary by John Mueller, author of Astaire Dancing: The Musical Films, is a stunningly detailed examination of the film’s dance sequences, explaining Astaire and choreographer Hermes Pan’s working methods, and how these were folded into the production at large. Complementing this commentary are other older interviews with Astaire, Rogers, Pan, and George Stevens Jr. Some of these interviews are mere snippets, but they offer a piece of the living history that Mueller discusses.

Produced for Criterion in 2019, “Full Swing” features jazz and film critic Gary Giddins, dance critic Brian Seibert, and Dorothy Fields biographer Deborah Grace Winer. This program isn’t as exhaustively technical as Mueller’s commentary, but it offers a full portrait of the major collaborations that drove Swing Time, Astaire and Rogers’s sixth collaboration, and even some of their other films. The dancing, songwriting, screenwriting, and direction are all discussed, refuting the notion of filmmaking as the act of a single conjurer.

Meanwhile, a new interview with film scholar Mia Mask directly confronts the troubling racial implications of the “Bojangles of Harlem” number—a subject everyone else on this disc more or less skirts. Mask offers a primer on the history of minstrelsy in America, discussing its roots in the ridiculing of slaves and connecting this legacy to Bill Robeson’s transcendent showbiz career and to Astaire’s “erasure” of Robeson in Swing Time. Mask offers an incisive and wide-reaching work of criticism in only a handful of minutes, contextualizing the exploitation that powered even our most beloved entertainments. A booklet featuring a characteristically lovely and erudite essay by critic Imogen Sara Smith rounds out the disc.

Criterion offers a lovely transfer of one of Fred Astaire and Ginger Rogers’s most enduring films, complete with a well-detailed and occasionally tough supplements package.