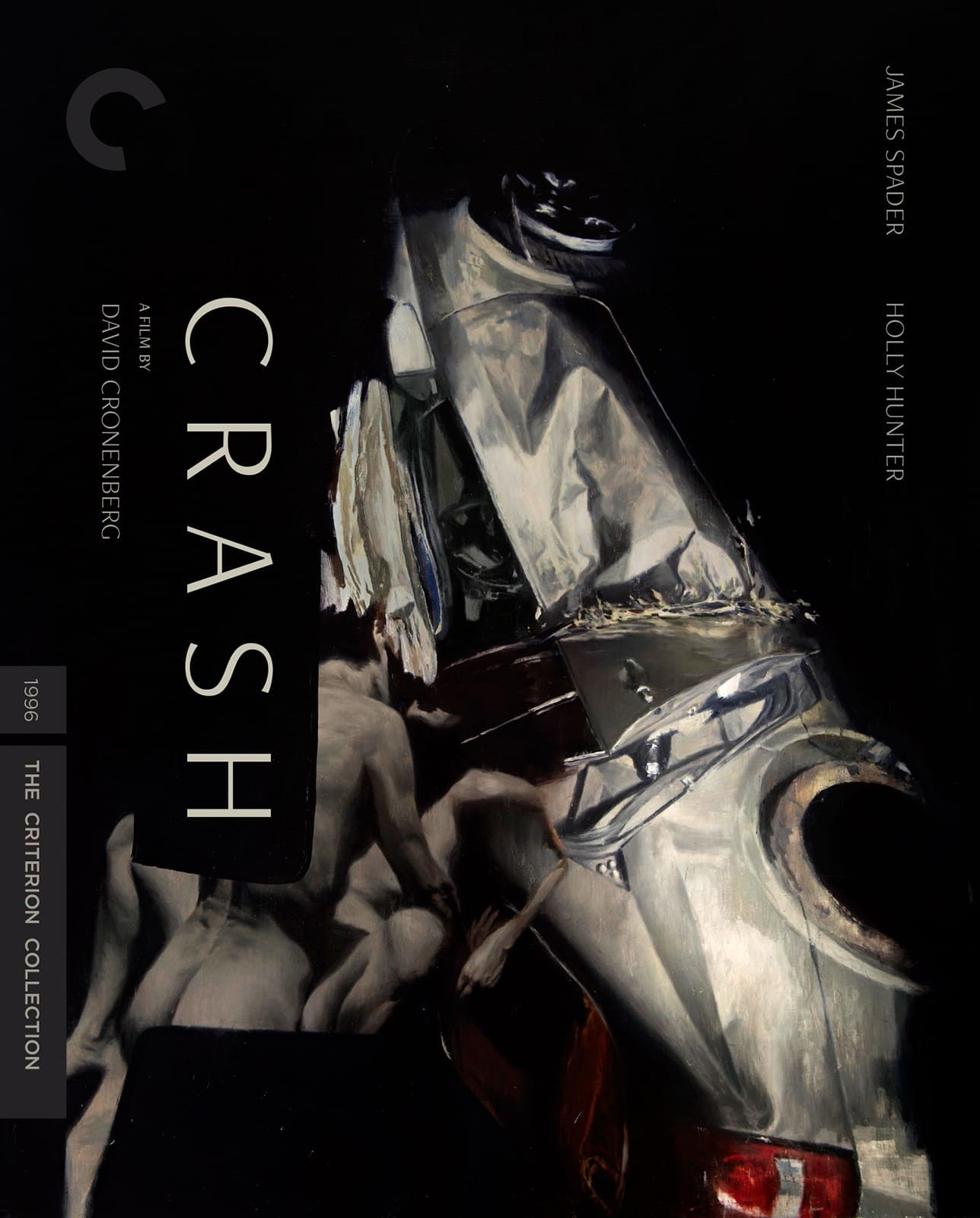 In David Cronenberg’s Crash, as in the J.G. Ballard novel from which it’s adapted, cars are agents of death, alienation, reassurance, and sex, serving as simultaneous prisons and islands of refuge. There are many images of cars shooting by on curving highways and twisting overpasses, and Cronenberg and cinematographer Peter Suschitzky linger on them long enough so that the found surrealism of these rockets on these concrete mazes becomes apparent to us. The film has a metallic, erotically impersonal sheen that suggests an ad in which imbedded cultural perversities have been brought to the fore, which is especially obvious in the film’s opening. At a hangar, the beautiful Catherine (Deborah Kara Unger) caresses a plane while a barely seen man approaches her and similarly touches her from behind. The rhyme between the plane’s metal and Catherine’s flesh introduces a motif that will govern the film, suggesting a need to sexualize technology to either implicitly regain control over it, liberate a posh yet sterile lifestyle, or both.

Catherine’s husband, the puckishly named James Ballard (James Spader), is also introduced engaging in extracurricular sex, with a young woman in a closed room on his set, where he’s directing, of course, a car ad. He’s helping to sell conformity with technology, which is conformity with society at large, though his alienated ease with life is disrupted when he crashes his little red car into another vehicle in a violent, terrifyingly sudden accident that kills the other driver, significantly wounds the driver’s widow, Helen (Holly Hunter), and splinters his leg. Cronenberg also lingers on this metal used to reassemble James’s leg, suggesting on a certain level that he’s merged with his car. This realization of fears and inexplicable desires, echoing the transformations undergone by many prior Cronenberg heroes, reaches its purest fulfilment via Gabrielle (Rosanna Arquette), a woman who’s engulfed in sadomasochistic body braces that seem to render her into a sexualized robot.

Profoundly unsettled, James attempts to merge his and Catherine’s kinky sex lives, drifting into a cult that seems intent on achieving the ultimate orgasm through vehicular suicide and manslaughter. The cult suggests a group of addicts, as well as a survivor’s coalition; they’re attempting to re-command technology that has betrayed them. Their scars are badges of honor, signs of success in an ongoing process, a mutation. They’re attempting to fuck away their damage with supreme acts of owning and acknowledging it—an idea that manifests itself in the film’s most audacious and upsetting sex scene, between James and Gabrielle.

Intuitively sensing that audiences will use his prior films as an interpretive “escape” to rationalize Crash, Cronenberg has the cult’s scarred leader, Vaughn (Elias Koteas), directly talk of the reshaping of the body via modern technology, only for the man to later discard this rationalization as sci-fi nonsense designed to initiate people who might otherwise be skeptical of his appetites. Whereas Cronenberg’s characters once spoke of “the new flesh,” the protagonists of Crash talk in poetic Ballard-isms that more ambiguously suggest a merging of humankind with its alienating and reassuring urban surroundings. Laid up in his chic flat after his crash, James says he’s beginning to feel like a “potted plant.”

Cronenberg challenges even viewers who’re willing to take Crash on its own terms, as in a fluidly staged, prolonged sequence in which Vaughn has sex with Catherine in the back of his enormous 1961 Lincoln as James drives it through a car wash. The diegetic sounds—the whirling of the wiper blades, the ruffling of the upholstery—render the sex a mechanical symphony that may or may not be rooted in violation and the car a simultaneous womb and exhibitionist’s stage. It’s difficult to tell whether Catherine is a willing participant in this act, because when she holds her ejaculate-splotched hand up to the driver’s seat where James is sitting, she could just as easily be crying out for help or out of bliss.

The film abounds in such mysteries, suggesting the unknowability of hungers, and this tension is exacerbated by Cronenberg’s agonized restraint. Given the film’s reputation and NC-17 rating, one might expect a carnival of sex and violence, though Cronenberg resists offering such conventionally cathartic gratification. And, ironically, the film’s relative tameness is probably the true source of its controversy. The lack of overt titillation, coupled with the implicit yet intense sexualization of nearly all of the film’s images, leaves us somewhat ungratified, like James, looking for something to distract us from our unsettled emotions.

Few scenes in Crash express normalcy; indeed, if this film is an experiment, there’s no “control” group. We don’t see James and Catherine having dinner or talking with friends or laying in their pajamas watching television, and we only see James working a few times. The film is composed of sex scenes, crashes, and Vaughn’s dissertations on celebrities, such as James Dean and Jayne Mansfield, who’ve died in violent wrecks. Vaughn is desperate to be part of pop-cultural history—he drives, after all, the car that JFK was shot in—and his longing for the ultimate ejaculation is inseparable from a death wish.

It’s as if Vaughn’s madness is communicable, as James and Catherine inherit this wish, and Cronenberg seems to see this development as optimistic. Discovering a new expression of alienation, James and Catherine’s relationship deepens. Miraculously, they reduce one another to objects so entirely as to rediscover one another as lovers marching toward an annihilating orgasm. One day they will join the highway wreckage, becoming an embodiment of society’s merciless momentum, reborn in their minds as grotesque modern art. Such destruction fuses biological and conditioned wants. The car wreckage is sculptural neurosis.

Sourced from a new 4K restoration supervised by D.P. Peter Suschitzky, this release represents a significant improvement over the washed-out 1990s-era DVD. The image boasts rich and varied colors, robust flesh tones, and a pristine sheen that emphasizes the film’s ironic, sexually charged sense of polish. The disc’s English DTS-HD Master Audio 5.1 audio track is the real revelation though, offering a vibrant soundscape with many subtly differentiated elements that not only bring the car crashes to vivid sonic life, but serve to intensify the small sounds that distinguish the down moments in the characters’ lives. Every sound effect intensely registers here, suggesting a haunted heightened consciousness.

A 100-minute conversation between David Cronenberg and J.G. Ballard, conducted at the British Film Institute in 1996, affords them the opportunity to speak quite incisively on Crash, the book and the film. Ballard is a huge admirer of Cronenberg’s adaptation, and they discuss the differences between the works as well as the controversy that greeted each upon their respective releases. The role of technology in society is of course raised, and Cronenberg memorably says that he was as disturbed by the novel as many were by his film. His audio commentary, recorded in 1996, goes into greater depth about the making of Crash, and he beautifully waxes on the “merging of nervous systems” between drivers and their automobiles, while offering many precise details about the production, from the matching of sets with locations to scouting for various cars. The sex scenes, Cronenberg says, were among the least of the film’s problems, as the actors were all quite game and daring. An essay by Jessica Kiang, footage of the Cannes Film Festival press conference, where Crash controversially won an award specifically invented for it, press kit footage, and trailers round out the package.