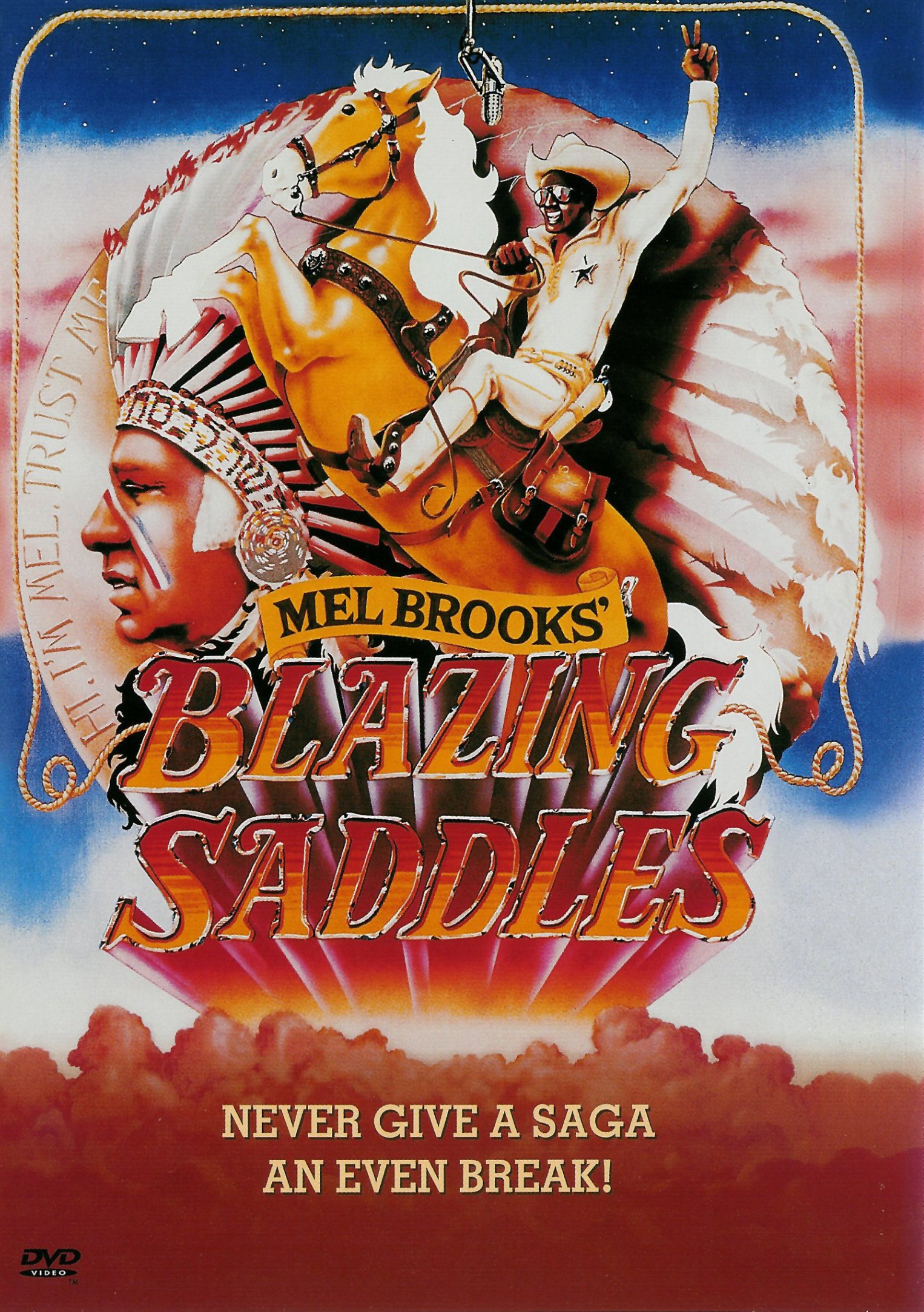 Pauline Kael once called the gulf between E.T. and Poltergeist a testament to the confounding ability for one man (Spielberg) to produce one enduring masterpiece and one miserable failure in the space of a year (and God forever damn her for not realizing that Poltergeist is, if anything, a more harrowing portrait of the nuclear family on the verge of dissipation, but I digress). Apparently, she hadn’t seen Mel Brooks’s 1974 one-two punch. For Young Frankenstein is so loving and charmingly goofy in spoofing one of Hollywood’s most successful early genres (‘30s Universal monster movies) that it winds up as much a tribute as it is a parody. But Blazing Saddles, a burlesque about a western town standing in the way of the railroad expansion and the black sheriff sent to discourage its citizens from deserting, is a limp, shapeless mess of a film trades in a genuine respect for westerns’ tropes for purile vulgarity and joy-buzzer showmanship (which wouldn’t be so much of a crime, really, if most of the jokes didn’t seem downright tame nowadays). Admittedly, the film’s primary subject matter, racial discrimination, establishes that Brooks can strike metaphorical, subtextual oil from the hidden legacy of Hollywood prejudice. But Blazing Saddles is strictly for all those too dense to realize that a fantastic and witty (albeit in an entirely different manner) deconstruction of the cinematic western mythos had already been mounted by Robert Altman with McCabe & Mrs. Miller.

As with any Brooks film, success depends almost solely on the strength of his cast, and Blazing Saddles works on a one-off-one-on rate. The two leads, the black sheriff and his washed-up deputy, are dull washouts. Cleavon Little, who with every Wayne Brady grin implicates Warner Bros.’s reluctance to cast the fiery Richard Pryor in the role he helped shape, and Gene Wilder, whose lackadaisical wallflowering has led many a review to read him as being possibly gay in an effort to give him something, anything in the way of dimensionality. (Though I think it’s fairly obvious when Brooks intends for his characters to be read as gay.) But Madeline Kahn’s Marlene Dietrich riff is just bizarre enough, without skirting into mugging of the Harvey Korman variety, that it’s easy to see how she netted an Oscar nod for what amounts to a three-scene, one-song part.

Occasionally, Brooks’s irreverent take on prejudice and his strategy of loading as many slurs into a single line of dialogue pays off, as when Little tells Slim Pickens to “watch that ‘boy’ shit, redneck!” And no one breaks the fourth wall with as much corny panache (Little revealing that his Entr’acte overture is actually a 20-piece big band that just happens to be planted in the middle of the desert). But, accepting that part of the film’s staleness might be due to its status as the single most influential comedy of the last 30 years (we’re still getting our comedy rocks off through historical anachronisms, sexual brazenness, and political incorrectness), Blazing Saddles remains one of Brooks’s more puzzlingly overrated efforts, with neither the brilliant theatrical conceits of The Producers, the supreme riot-dud gag ratio of Silent Movie, nor the flawless timing and loving fidelity to the blackout sketch tradition of History of the World, Part I. Blazing Saddles just has Dom DeLuise calling a gaggle of French chorus boys “faggots.”

For one of the most lazily framed mainstream films in history, Warner’s video transfer (the “30th Anniversary Digital Transfer”) looks truly wonderful. A nearly flawless print with as vibrant a color range as can be expected from a ‘70s film, you can practically see every old joke coming a mile away. The 5.1 surround remix doesn’t really do much until the musical numbers kick into gear, but it’s remarkably clean nonetheless, aside from the incessant vulgarity.

I might have been poking fun with the title of the transfer above, but at least it wasn’t (as far as I can tell) a lie. Mel Brooks’s “scene-specific commentary” is absolutely, positively not that. Based on the evidence on display, Brooks recorded his comments completely detatched from the act of watching the film, as he doesn’t reference what’s on the screen at any single point. Not only that, but he runs out of gas over a half-hour before the movie is over. His reminisces are interesting (if not particularly funny, for those accustomed to riotous yak-tracks for comedies that rival the films themselves for laughs), but for a track to run for only two-thirds of the movie’s duration is downright cheap. The two documentaries are a better bet. Back in the Saddle is a half-hour behind-the-scenes session that’ll please the film’s fans, and the snip from Lifetime’s Intimate Portrait series on Madeline Kahn will please the Kahn-worshipping queens. The pilot episode for a spinoff TV show, Black Bart, will please no one, except those who weren’t aware that the n-word could be used on network TV in the ‘70s.