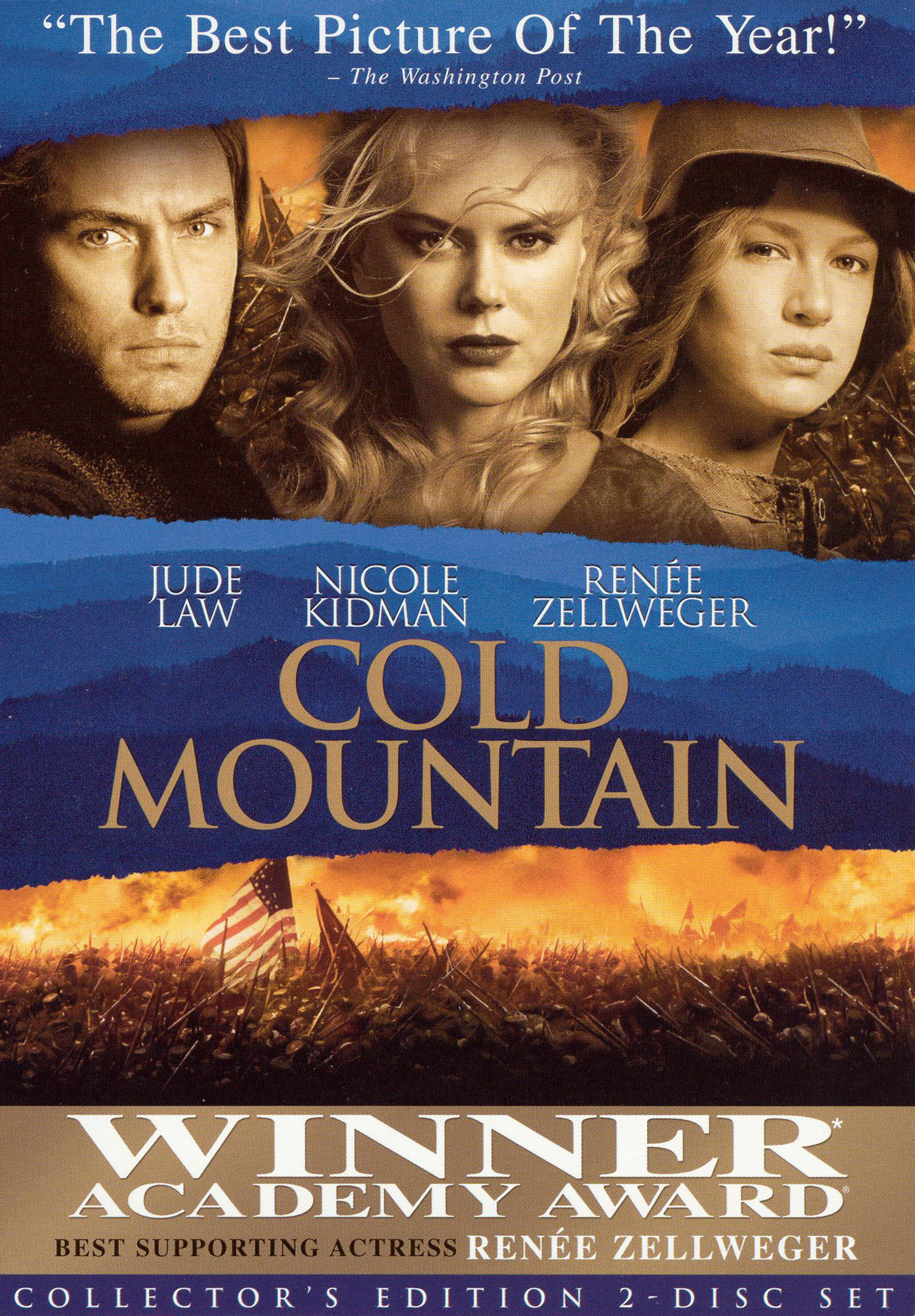 Is Nicole Kidman contractually obligated to interact with birds in all her films? In Moulin Rouge, she tells a bird that she’s going to fly away. In The Hours, she whispered sweet nothings to a dead bird while lying on the ground. In The Human Stain, she had to play her best lines to a crow. And in Anthony Minghella’s latest harlequin romance, Cold Mountain, the birds are out in droves: she meets a white dove (read: peace) inside a church (take that John Woo!); she sees the future in a flight of crows (read: death); she’s repeatedly attacked by a devil-may-care rooster (read: stupid); and she kills a turkey when her character finally resigns herself to the fact that her Civil War boy toy may not be coming home. Make no mistake: Cold Mountain is just a step above V.C. Andrews, but it’s overwrought bird imagery is the least of its problems.

Piano-playing Ada (Kidman) and hurly-burly Inman (Jude Law) meet-cute in North Carolina’s Cold Mountain (he’s playing with wood, she’s carrying apple cider). When the Civil War hits, their embryonic romance is cut tragically short and they spend the duration of the war trying to reconnect. Ada stays in Cold Mountain, rebuilding her farm with the help of green-thumbed comedian Ruby Thewes (a cock-busting Renée Zellweger) and negotiating the ill-will of a clan of guerrilla policemen hellbent on punishing anyone who may be harboring deserters. One such traitor is Inman himself, who encounters an all-star cast of Oscar hopefuls on his epic Johnny Appleseed stroll between a war hospital and Cold Mountain. (Similarities between Cold Mountain and Tim Burton’s fantastical Big Fish are striking, but only the latter should be taken seriously.)

Worse than Minghella’s labored romanticism is his own disbelief in the very harlequin conundrum he orchestrates. Come nighttime, Ada reads Wuthering Heights to Ruby. The allusion is ridiculous, not because Ada and Inman can’t hold a candle to Heathcliff and Catherine, but because of Minghella’s cloying need to gauge and justify the ardor of Ada and Inman’s mini-romance (besides apple cider, they share only a stack of letters and an arduous kiss between them). The best scene in the film—an encounter between Inman and the widowed Sara (Natalie Portman)—subtextually grapples with the lament of a war that nearly separated every man from every woman. This one scene truly evokes how even an insignificant romance was enough to make any man heading to war (or any woman left behind) going strong for a lifetime.

On the road, Inman lives out a book of Bible stories that exist only to validate his goodness and ruffle his determination to get back to Cold Mountain: he saves a black woman from a constipated minister (Philip Seymour Hoffman); he helps a hillbilly (Giovanni Ribisi) with his dead cow; he refuses to fuck no less than two women (that’s love, folks!); and he saves another one from rape. Every encounter is more or less a contrived, woefully obvious attempt to address notions of Christian charity gone awry during the Civil War. Subtlety is not Minghella’s strong suit, but Cold Mountain is not without its graceful moments: an elderly hillbilly woman played by Eileen Atkins dreamily ruminates on violence; Ruby deliberately puts distance between herself and her father; and the CGI flight of crows reflected inside a well brings to mind M.C. Escher’s “Sky and Water.”

Predictably, romance dutifully trivializes race and war in Cold Mountain. Cotton-picking blacks and tattered American flags are Minghella’s window-dressing of choice. I don’t know what’s more ludicrous: the fact that a carefully laid-out explosion rips a soldier’s clothes off (yup, even his underwear, but his atlas-shrugged pose guarantees that you won’t see his dick) or that Minghella thinks he’s negotiating race issues by having a Yankee black man and Confederate Native American exchange a quickie glance on the battlefield. Oh, the humanity! Who cares about race as long as we know that Law’s Southern gent wouldn’t kill a family of scared-as-shit African-Americans for their basket of chicken eggs? In Cold Mountain, the Civil War exists only to deter Ada and Inman from power-fucking. “I’m very grateful for the pork,” says Ada. Indeed you are.

It’s almost ridiculous how good Cold Mountain looks on this two-disc special edition, which preserves the film’s original 2.35:1 aspect ratio in anamorphic video. There are some instances of edge enhancement and some shots look a tad overblown, but this is a top-notch transfer. Whatever you may think of Anthony Minghella, his attention to detail is unmistakable. From the distinct and varied colorations of distant treescapes to the many reds and oranges of burning fires, the colors on this transfer are very much alive, as are the gorgeous skin tones. The audio track is solid all around (you get to choose between Dolby Digital and a DTS 5.1 tracks), but the surrounds are so generously employed during some of the more dialogue-driven sequences that they actually prove distracting. Also, Nicole Kidman’s voiceover comes through loud and clear and it’s never overwhelmed, for better or for worse, by the powerhouse score.

Available on disc one is a solid commentary track by Anthony Minghella and editor Walter Murch, recorded at the same studio where the film’s ADR was done. Minghella proves remarkably intelligent and his dissections of the film’s images and complex sound design are meticulous, only confirming what I’ve always known: he tries too hard to make “movies.” Side two begins with the remarkable “Climbing Cold Mountain,” an exhaustive featurette that documents the making of the film from its earliest stages (building designs and models) to its finishing touches. (Those looking for a less involved, junket-style featurette can check out the gratuitous “A Journey to Cold Mountain” making-of special.) For fans of the film’s music, you won’t want to miss “Words and Music of Cold Mountain,” which clocks in at an hour-and-a-half and features, among other things, musical performances from the film’s soundtrack and a discussion with Minghella and Sidney Pollack. Rounding out the second disc’s supplemental materials are 11 deleted scenes, three storyboard comparisons, a brief history of the sacred harp, and sneak peeks of The Alamo, The English Patient Collector’s Edition DVD, Shall We Dance?, and The Human Stain.

Nicole Kidman’s voice in Cold Mountain is liable to send any man off to war. Except, that is, for Rex Reed, who considers it “a prayer for the human race.”