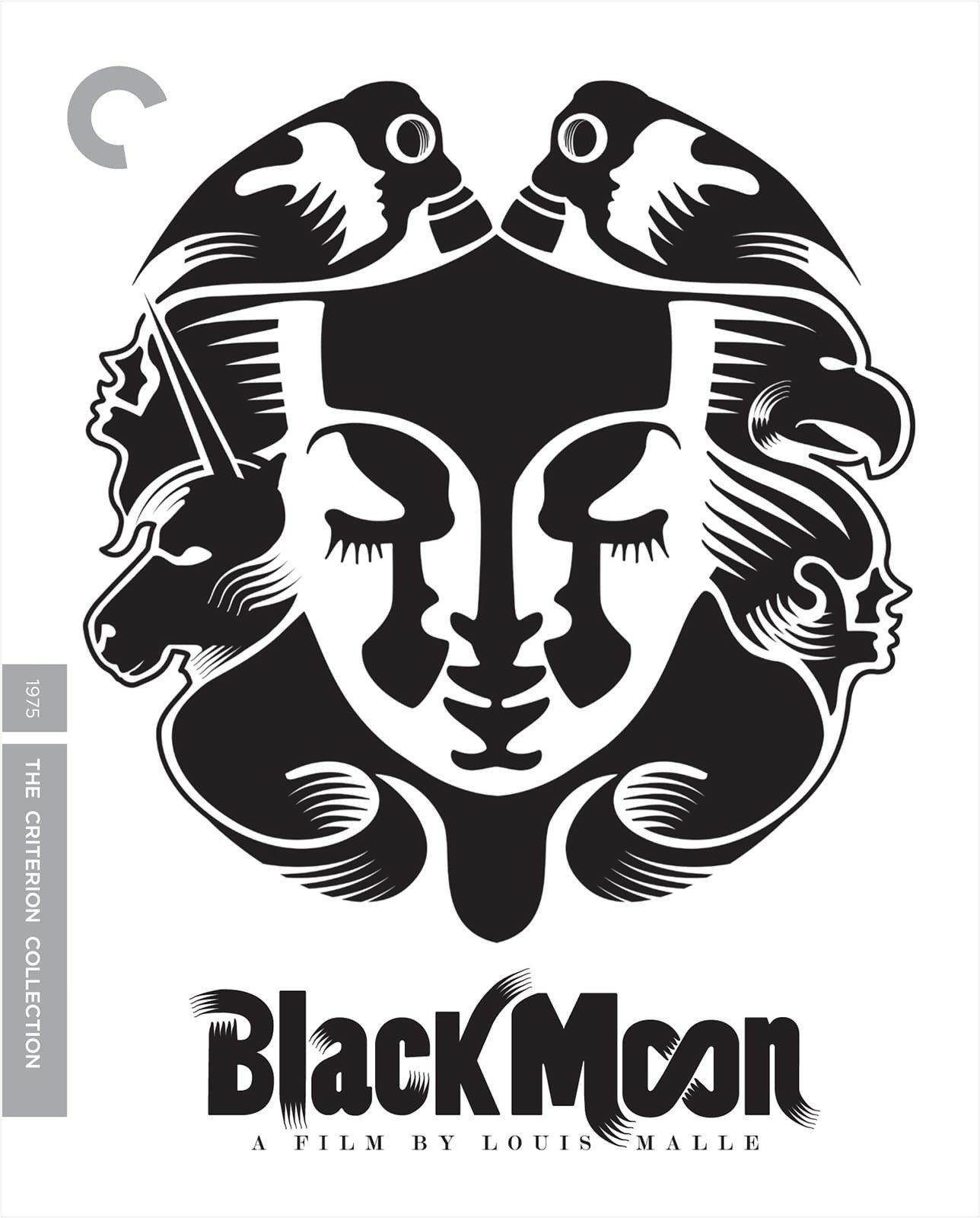 Embarrassingly, I’d never recognized the phallic potential of unicorns before observing them in Louis Malle’s fervent hallocinoscape Black Moon. A barely pubescent blonde, Lily (Cathryn Harrison), on the run from troops in some not-too-distantly future boys-versus-girls war, spots a sable, pot-bellied horse with a headspike and trails it to a rural manor in an otherwise barren and vacant French countryside. En route, and while in the grand house, she also unsurprisingly encounters serpents, most of them with elegantly squared, green-and-black color morphs, that halfheartedly wrap themselves around her ankles before disappearing. The unicorn—a bumblingly chivalrous symbol with a stiff, attractive male attribute perched on its head—is desire, and the limp, devious snakes are bewilderment. The former Lily chases, and the latter she is casually confronted and intimidated by.

If only the remainder of Black Moon were so tidily penile. Malle’s quasi-fairy tale is resplendent with so many cocks and talking animals that it becomes a virtual satire of Freudian nursery-rhyme analysis; there’s a gargantuan rat who chats with the withered, bedridden matriarch of the manor (Therese Giehse), a pig who grows disturbingly loquacious at the dinner table, and the unicorn itself, which turns out, like most entities with rigid outcroppings, to be drolly hypocritical. (The unicorn scolds Lily for trampling on some wildflowers that screech in pain; when Lily points out that the unicorn is presently munching on the same wildflowers, it takes pause to reply, “Suppose we change the subject?”) The humans who inhabit this dream world are comparative mutes: The old woman barks unintelligible but vaguely military warnings into a CB radio while remaining otherwise torpid (Lily mistakes her for dead); two stoic twentysomethings, a boy (Joe Dallesandro) and a girl (Alexandra Stewart), who are presumably the crone’s progeny, silently tend to the flora and fauna around the estate’s perimeter while barely acknowledging Lily’s existence. In one scene, the boy grabs Lily passionately, caresses her hair and twirls her around, enacting a seductive exordium. They stare at each other blankly, unsure of what to do next, until he coldly unhands her.

In moments like these the cadence of Black Moon isn’t notably dissimilar from its ineffably organic WWII predecessor, Lacombe, Lucien. The abandoned farm where that film’s protagonist spends his final, idyllic days informs the hyper-real milieu where Lily, too, comes to terms with the extraordinariness of her subconscious. But where Lacombe, Lucien’s sexuality was tethered to the narrative’s nebulous moral universe (Lucien’s love interest is basically his military chattel), here it’s an expressionistic free-float, a way of suggesting that pubescence, however episodic, is dangerous to view as a stratified “story.” The top five buttons of Lily’s thin shirt remain popped throughout her adventures, the barely implied curves of her nascent womanhood straining to be noticed and desired. Toward the end of the film, she breastfeeds the old woman after having watched the other girl on the property do the same; “I’m afraid I don’t have much milk,” she warns, and stares quizzically at her body’s hitherto hidden utilities. While she observes the boy and girl groom horses in the estate stable, a thick pipe jutting out from the wall deposits water between her legs; the camera pans up to find her dumbfounded at her own moistness.

This hodgepodge of phantasmagoria is only partly effective; Malle’s masculinely arrogant attempt to crack open a nubile’s mind aside, the more explicit the imagery becomes the quicker it feels lazily parodic. Lily gets attacked by a giant sow and some naked toddlers who abruptly vanish after molesting her—a scenario Arthur C. Clarke might have discarded from Childhood’s End. And when she first approaches the elderly woman’s chamber, she comes across a photo album; the first picture in it is, hilariously, a still of the elderly woman in bed, using the CB radio, which we see within the film’s diegetic sequence seconds later. (It’s a slightly more obtuse version of Spaceballs’s meta-VHS gag.) It’s all intended as sex tectonics, a half-lyrical, half-studious representation of Lily’s perplexing inner shifts that have her dehumanizing the genitals while clinging to infantile fetishes. But as Bruno Bettelheim observed in The Uses of Enchantment, the fairy tale is not an allegorical form, per se; it rather provides a series of subtle but general clues that aren’t sexualized until they are internalized and then conquered by the reader. The trippy opening of Black Moon seems to understand this distinction; even the unicorn is less about dick than about corporeal curiosity. And then the film metaphorically tears Lily’s hymen with the decapitating of an eagle. You’re better than that, Louis.

Everything in Black Moon appears paler than it should: the sow’s belly bears only the hint of pink, Harrison’s chest is snow-like, etc. We take this at first as a concretization of the protagonist’s hunger—famished from her journey, when she sees even a block Swiss cheese pocked with black ants she lifts it to her lips and bites—and then as a token of the fantasy’s anemia. Criterion’s 1080p transfer gives Sven Nykvist’s peaked palette a piercing sharpness that helps to define the oneiric content, though at times the film grain is rendered a bit boxily. (In a scene where the boy and girl dig graves for fallen soldiers in the gender war, a plume of dirt is momentarily overtaken by digital jags.) Still, the landscape is crystal clear, even if it’s not necessarily Nykvist’s most graceful or narratively attentive work. The impressionistic score, by Diego Masson, provides a shattering piano recital climax at the film’s denouement in Dolby Digital.

You’re getting lazy, Criterion. A 10-minute interview with Louis Malle? Providing both the English and French soundtracks was a nice touch, though there’s not a significant difference between them. (Supposedly the film was shot in both English and French; providing both versions of the movie, rather than simply a dub track, might have been more worthwhile.) Ginette Vincendeau’s essay on the film does a fine job of contextualizing its madness within Malle’s oeuvre.

Suckling as it does from the budding teat of preadolescent sexuality, it’s not surprising that Black Moon is a tad Malle-nourished.