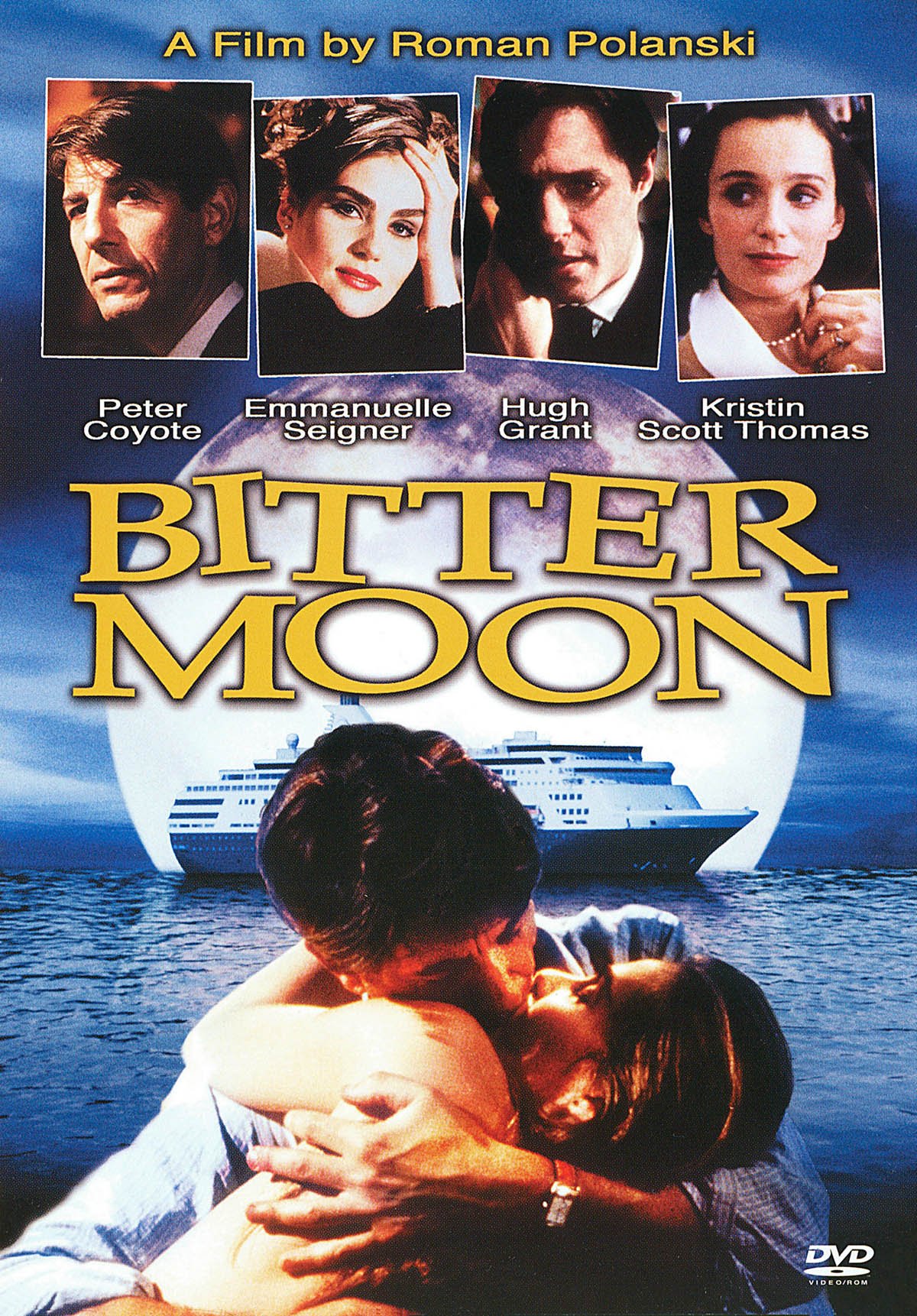 Roman Polanski’s 1992 ode to perversion, Bitter Moon, doesn’t have the reputation of some of his other masterpieces like Rosemary’s Baby, Repusion, or even Knife in the Water (its closet kin considering the film’s equal obsession with pent-up sexual claustrophobia). As easy as it would be to make rude connections between the film’s raunchy shenanigans and Polanski’s own history, the fact is that Bitter Moon doesn’t feel like either an explanation, an apology, nor a defense of the kinky sexual games adults play. Think of it as Polanski’s Who’s Afraid of Virginia Woolf.

The Nick and Honey of this version are Nigel and Fiona (Hugh Grant and Kristen Scott Thomas), who attempt to rub some Lidocaine on their seven-year itch by taking a cruise to India. (That their names are so quintessentially British is a tip that Polanski’s film is not without a farcical bent.) A friendly native Indian (Victor Banerjee) laughs off the hubris of their goal, seemingly suggesting that India’s rampant overpopulation is the last thing a couple on the cusp of having children and in desperate need to jump-start their sex drives should be exposed to. If Banerjee’s character, a widower with a cherubic daughter, represents sexual adjustment (in Polanski’s burlesque, such adjustment is aligned with a total absence of sex), it’s not too long before the couple is introduced to maladaptive sexuality.

The film’s George and Martha are Oscar and Mimi (Peter Coyote and Emmanuelle Seigner, Polanski’s wife). Married but obviously horn-locked in mutual hatred, they impose upon Nigel and Fiona at every opportunity. Oscar calls Nigel to his cabin repeatedly to reveal to him the long and twisted tale of his relationship with Mimi. Their affair, told in Oscar’s subjective flashback, moves with sickening momentum from their meet-cute, passionate love affair, sexual obsession with each other, and the moment when they begin get so tired of each other that they swirl deeper and deeper into a cycle of betrayal, abuse, and torture.

The most transgressive aspect of Bitter Moon is how Polanski’s presentation of the lurid material (widely derided by critics as being too misanthropic and extreme) is far more successful when dealing with the self-loathing, self-destructive Oscar than in trying to make Nigel’s overblown indignation believable. Even so, the balance between celebrating Oscar’s sexual fantasies as they come true and exposing the violence that constantly undercuts them ensures that no one can accuse Polanski of condescending to Nigel for his offended reaction.

One of Polanski’s most celebrated directorial motifs, the decimation of human bodies as a reflection of their withering spirits, is brutally forthright in Bitter Moon. Whereas the hollowing-out of Rosemary Woodhouse as she begins to lose her notions of sanity was in many respects as much self-imposed as it was inflicted upon her by her egotistical husband, Mimi’s devastation is unmistakably the work of Oscar’s cunning and ruthless psychological demolition. In a supremely dark joke, this devastating section of the film (in which Mimi begs Oscar to abuse her) is the most vicious update of the Albee play. In Virginia Woolf, George makes “the insulting, the hurtful mistake” of loving Martha enough to enabler her. In Polanski’s version, Oscar makes the mistake of not killing Mimi when he gets the chance.

New Line’s video transfer is, like Nigel and Fiona’s sex life as described by Oscar, “perfectly adequate.” Though clear and sharply defined in an anamorphic frame, there are a few problems with color presentation, and the profuse nighttime scenes really draw unwarranted attention to the disc’s disappointing black levels (especially during the title-explaining “bitter moon” sequence). The sound mix, though limited a bit in terms of special effects (the gunshots of the film’s climax are remarkably chintzy-sounding), is also incredibly vast. Vangelis’s score, an oft-hilarious parody of late-night Cinemax softcore music, sounds astonishingly good, with moan-inducing bass synth washes and heart-fluttering piano ostinatos.

There is a trailer gallery with Bitter Moon as well as Polanski’s Death and the Maiden (along with three other New Line films), but that’s the extent of it.

Bitter Moon is a brusque reminder of the sexually tormented, nihilistic Polanski we know and love.