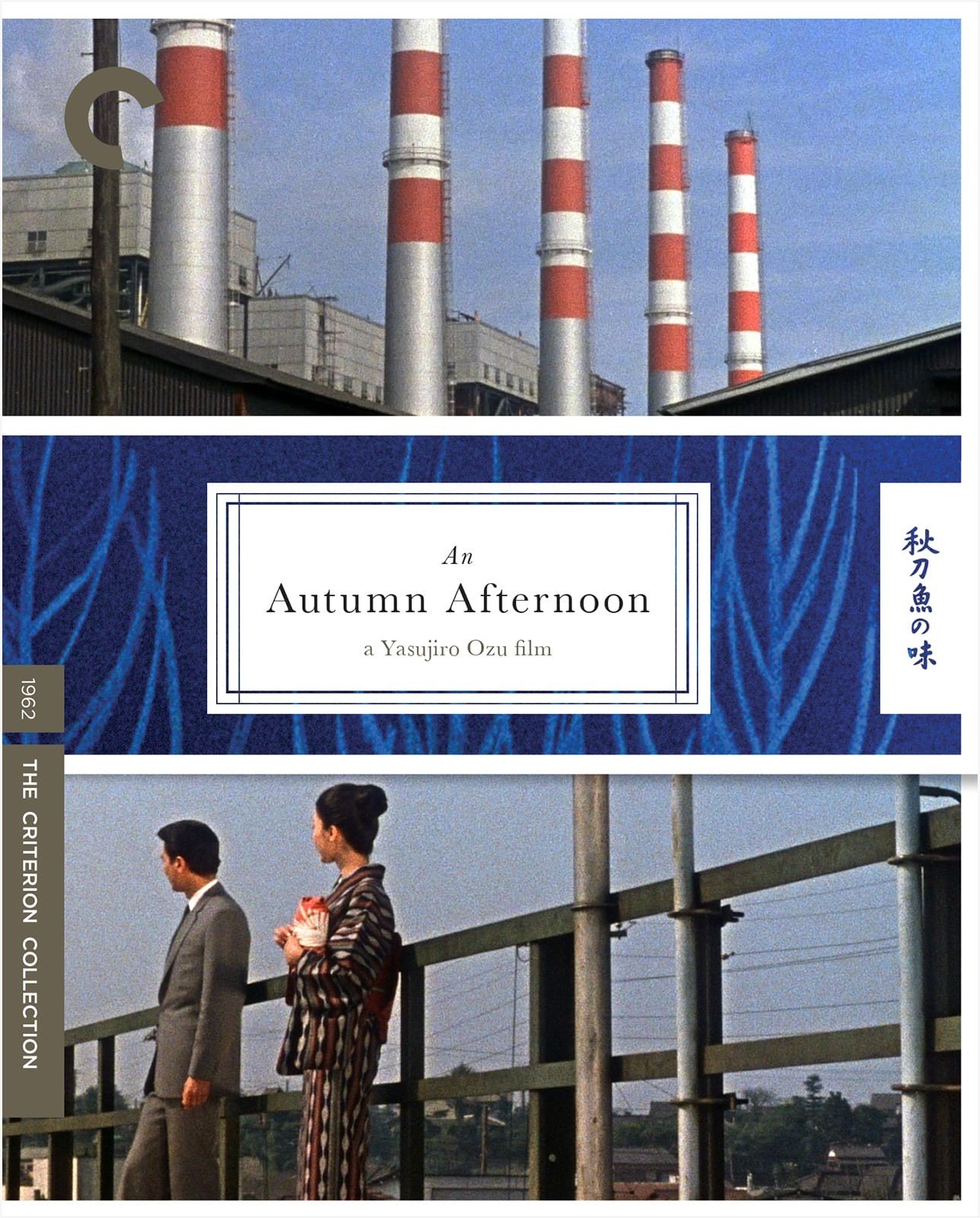 It’s tempting to understand An Autumn Afternoon as a highlight-reel package from Yasujirô Ozu’s career. After all, not only is it the Japanese director’s last film, but elements and characters within it seem to be in direct conversation with his prior work. Kōichi (Keiji Sada) covets a new set of golf clubs with the same impish consumerism that drove two boys to want a television set in Good Morning. In addition, there are the coffeehouses and bars, staples of Ozu’s work, here typified by Tory’s Bar, which serves as a recurring location throughout the film, with Ozu even lingering on the neon sign as it brightly invites patrons amid other, equally shimmering beacons of small-town hospitality. The film stars Chishû Ryû, whose appearance in 52 of Ozu’s 54 films culminates here in a performance that finds him alone in the film’s final shot, weeping silently after his daughter, Michiko (Shima Iwashita), has been married away. These factors (and numerous others) offer Ozu’s cinematic world as one of repetition and consistent interrogation of identical themes, but lest this imply flatness or stasis within Ozu’s oeuvre, An Autumn Afternoon, much like Equinox Flower just years prior, invigorates the director’s body of work through subtle reversals and progressions in both image and narrative, with a sophistication that elides hyperbole and overstatement.

The series of striped smoke towers which appear in the film’s opening scene are often noted by critics and scholars for their red-and-white colors, since An Autumn Afternoon uses the color scheme scheme throughout, as if to suggest a uniformity between spaces that characters occupy, without any of them explicitly calling attention to it. Yet such rigidity isn’t merely a formal tic for Ozu, but metaphorical for the people themselves, whose social operations transpire with a similar kind of circuitous procedure. Smoke billows quietly from the factory setting, but smoke symbolically seeps in much the same manner from characters themselves, though Ozu plays scenes in either seemingly straight or contrapuntal ways, with the film’s soundtrack seldom deviating from its whimsical tones, almost sounding like music borrowed from Jacques Tati. But if Monsieur Hulot, Tati’s go-to stand-in for a world of rampant modernization, remains incapable of deliberate action amid his changing environs, that’s not the case for Ozu’s characters, who offer intelligible replies to shifting expectations for social norms. Akiko (Mariko Okada) chastises Kōichi for his inability to save money, saying, “I want to buy things too, but I control myself.” Kōichi insists the golf clubs are a bargain, and it’s in this moment that Ozu aligns himself with Akiko, whose preference for maintenance and control could be read as a proxy for Ozu’s visual mantra.

Nevertheless, too stringently understanding Ozu’s formal interests as transferable to character traits is risky business, if only because the control within Ozu’s frames could just as easily be situated as visual evocations of household order, with a battle of the sexes manifesting along the lines of socio-cultural expectation. After all, when Hirayama (Ryû) suggests that Michiko seek a husband, he does so drunkenly, after a night out with his friends. Only men drink in Ozu’s films and, in this instance, the drunken behavior has significance ramifications for Hirayama’s crumpled state by film’s end, while also gesturing back to an earlier episode, in which Sakuma (Eijirō Tōno) is helped back to his modest noodle shop after a night of heavy drinking, left to the care of his daughter, who weeps quietly while Sakuma is passed out in a chair. Ozu’s dealing with these instances hardly deviate from the film’s more outwardly happy moments, like when the group of male friends are huddled around a television set, watching a baseball game.

These slight shifts in tone and image construction seemingly suggest Ozu as an objective filmmaker, detached from the proceedings and unwilling to offer direct commentary. At least, this would be the implication were one to overlook Ozu’s statements in the characters of his films, who are largely incapable of theorizing their circumstances beyond an awareness of the present. When Hirayama meets up with Sakamoto (Daisuke Katō), they not only perform a brief, salute-oriented dance to a military march, but ponder what the state of affairs would be like if Japan had won WWII. When Sakamoto suggests “the blue-eyed ones would have chignon hairdos and chew gum while plunking tunes on the shamisen,” Hirayama smilingly retorts: “I think it’s good we lost.” Ozu sees that cultural constraints pollute a more imaginative envisioning of historical destiny and An Autumn Afternoon gets to the core of these matters with more acuity and kind-hearted melancholy than any other post-war film of Ozu’s career.

Few films deserve a high-definition transfer as much as Yasujirô Ozu’s late-period color films, and the Criterion Collection has taken tender care with each frame of An Autumn Afternoon to maintain depth and clarity throughout. Most notable are the exterior shots of industrial Japan and night-lit streets, like the neon sign for Tory’s Bar. Even less decorated shots, like a middle-class apartment block, preserve the fine detail that Ozu integrated into every frame. If one intends to study the film at any length, this new Blu-ray is an essential release, more so than the previous DVD, if only for the visual dynamism. The soundtrack, while largely strong and free of any significant defect, sounds strained at times to balance dialogue and Ozu’s self-diagnosed “happy weather music.”

The features are carried over from the film’s previous DVD release. Criterion opts for an academic lot of supplements, with David Bordwell providing a feature-length commentary, offering mostly formal explanations for the film’s intricate use of space, image, and editing. Any student or cinephile wishing for a more concrete explanation of Ozu’s mastery will find much purchase in Bordwell’s discussions of color, low-camera placement, and Ozu’s differences from “most directors,” as Bordwell likes to call them. Overall, Bordwell is an engaging presence and only seldom drops out to let the film play without intrusion. Otherwise, there’s an excerpt from the French television program Ciné Regards, in which Michel Ciment and Georges Perec explain Ozu’s importance as a filmmaker to be cherished as one of cinema’s greats, as well as a pair of trailers. Finally, essays by Geoff Andrew and Donald Ritchie discuss Ozu’s “profound compassion” and the discovery of Ozu’s diaries.

Criterion’s Blu-ray upgrade of An Autumn Afternoon strikingly renders Yasujirô Ozu’s most direct critique of the Westernization of modernized Japan.