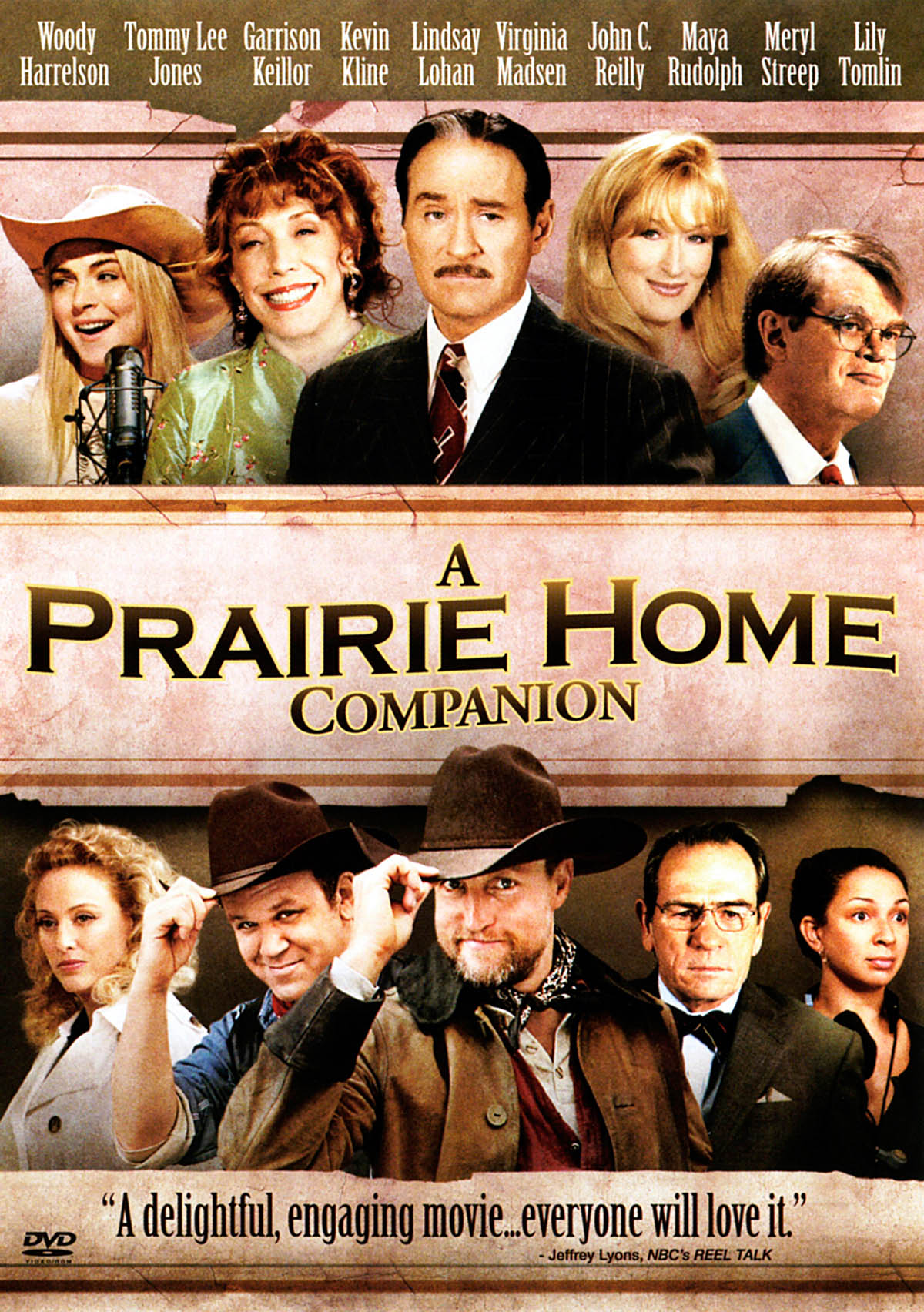 Robert Altman has compared his movies to sand castles, built by friends who come together at the end of the day to watch the tide take them away. Garrison Keillor’s world is one such formation—an old place bursting with heart and personality but on the brink of collapse. The opening shot of A Prairie Home Companion evokes creation: a radio tower picks up static and loads of crisscrossing transmissions, and as the signals become clearer the stars in the sky begin to light up. It’s a strong image with a fragile connotation, because Altman suggests it’s a vision you might see reflected in puddle water: step on it too hard and it might dissipate. This is like the Fitzgerald Theater in St. Paul, Minnesota, where Keillor’s fictional variety show is about to give its last performance, thanks to the looming foot stomp of The Axeman (Tommy Lee Jones), who arrives at the theater with no respect for the old and no knowledge of F. Scott.

A motley crew of peripherals (charming: Marylouise Burke’s Lunch Lady; off-kilter: Kevin Kline’s Guy Noir; deadweight: Maya Rudolph’s very pregnant Molly) and an angel of death played by Virginia Madsen flutter in Ambien trance around the cast of singing characters, among them two joke-cracking cowboys (Woody Harrelson and John C. Reilly), a sister duo (Meryl Streep and Lily Tomlin), a suicide-obsessed teen (Lindsay Lohan), and Keillor himself. Prairie Home Companion, made by a master 81 years young with a borrowed ticker beating in his chest, is a film that grapples with death. “Every show is your last show,” someone says. Later: “You have to lose your life before you can find it.” Altman understands death as a skulking, inextricable part of creation and Madsen is, perhaps, the Grim Reaper of his dreams—the one to knock over the sand castle of his life.

Altman’s graceful camera, the movement of characters across the frame, and the overlapping voices collectively convey a genial sense of place. But in spite of its lovely and limber exoskeleton, Prairie Home Companion is lighter than Light FM. Altman drops in and out of his character’s lives as if he were switching between radio stations, but the transmission he picks up isn’t always deep, the hee-haw music that dominates the film doesn’t profoundly connect with the off-stage drama as it does in the director’s little-seen gem A Perfect Couple, and the acting is off-center (the dressing room where Streep and Tomlin’s sisters rehearse is an Altmanesque hall of mirrors as familiar as a creaking floor board, but Streep’s mannered tics diffuse the grace of the elegant visual layout), though the philosophical tidbits the audience picks up along the way can be revealing (“Every show is your last show,” goes a guarded Keillor’s defense mechanism).

Prairie Home Companion’s highlight is a scene about reconstruction: a duct tape commercial Keillor must deliver on the air without a script. The energy of the film feels dispersed for much of its running time, but in this scene it coalesces. This is a quintessential Altman scene in which people rally together and affirm the healing power of communal creation. Keillor’s costars pitch in to help, transforming a failed commercial delivery into a work of improvisational art through which the individual strengths and insecurities of Altman’s characters are revealed. Few scenes in the movie approach the subtle complexity of this rapturous little jam session. But if Altman is quick to topple this sand castle scene it’s because all good things must come to an end. Madsen’s Dangerous Woman says, “The death of an old man is not a tragedy.” This is a lie, of course, but Altman—whose death will break many hearts—knows how to tell a sweet one.

I can’t explain the reasons for the lines across the screen during the opening shot of the film (don’t let some of these reviews fool you: I am not an A/V geek), but I know that it looks like shit. Lucky for us, it’s smooth sailing for the rest of the picture. The image is luxurious through and through, as is the film’s music and dialogue, which pours out of the speakers like honey. Kevin Kline’s character is still a nuisance but the actor’s voice is a strange seduction.

Robert Altman’s commentary tracks are notoriously weak and this one is no exception. Kline joins Altman here, perhaps to keep the director on point, but the commentary is rarely interesting or in sync with the image. Altman, a “benevolent dictator” according to Garrison Keillor, appears much sharper on the wonderful 50-minute featurette “Come Play With Us” that traces the evolution of the film from its radio-show origins to the cast lavishing familiar praise on their director. (The highlight of the feature is the lengthy scenes of Altman interacting with his actors; they’re like spying on a maestro as he works on one of his frescos.) Rounding out the disc are complete musical and “advertisement” segments from the film, a soundtrack preview, a theatrical trailer, and sneak peeks.

Nowhere near Robert Altman’s best, but we’re still lucky to have it.