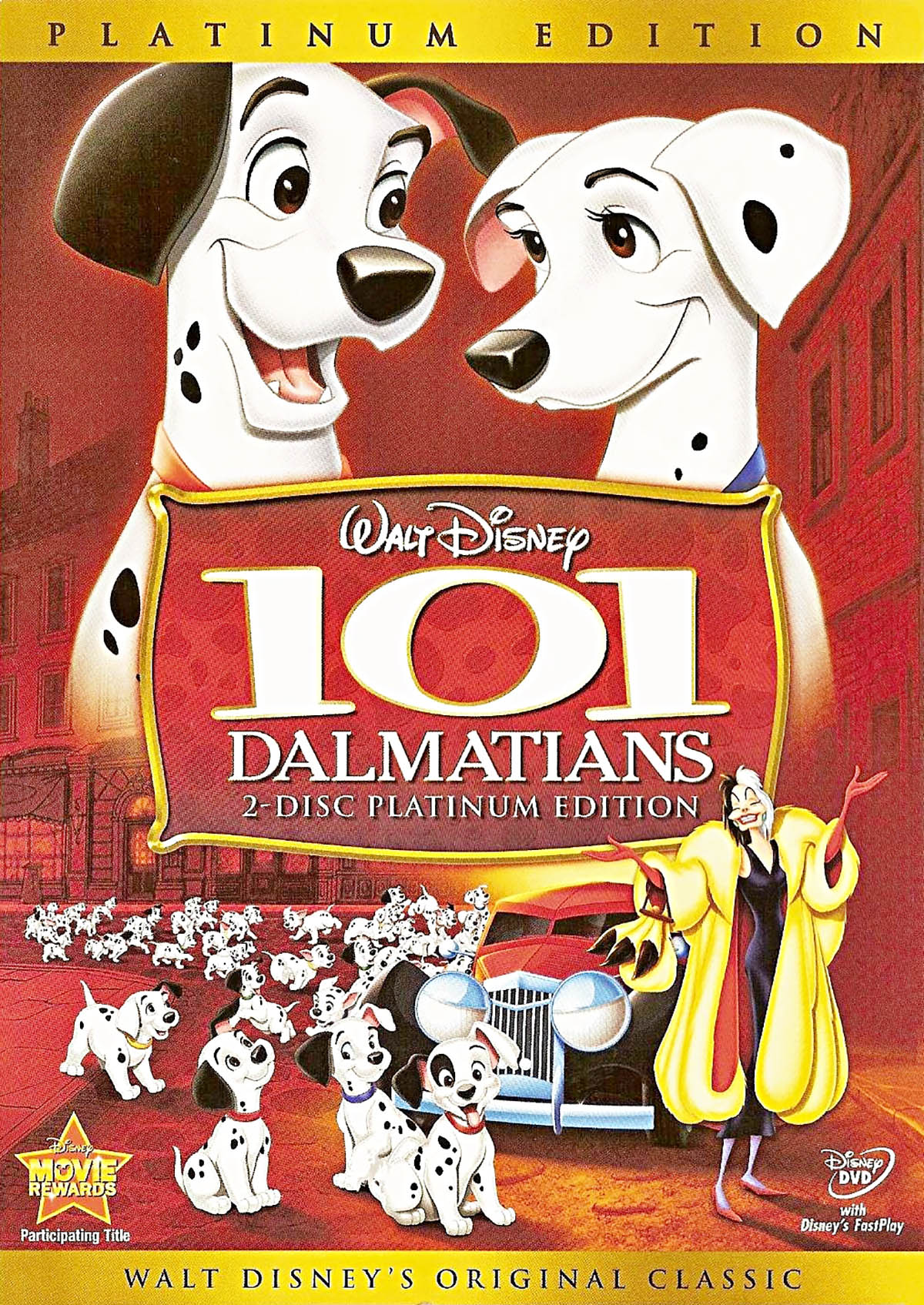 There may be other Disney movies that are, at worst, purposeful mediocrities and, at best, junky entertainments. I mean, they’re not all the psychologically regressive, reactionary enslavements of both imagination and womankind that their most praised “studio classics” Snow White, The Little Mermaid, and Cinderella clearly are. One can enjoy the likes of The Jungle Book or Alice in Wonderland or even The Emperor’s New Groove without simultaneously yanking up the slack of America’s artistic equivalent of foot-binding straps. Still, if you ask me, there are but two movies from their entire promiscuous home video vault that should have even the legal right to infiltrate the minds of impressionable, hormonal time bombs—the first, Dumbo, because of its devastatingly sweet portrait of maternal love in the face of socio-sexual rejection, and the second, 101 Dalmatians, because of its equally compelling take on the aesthetic and fashionable virtues of tearing the roof off the mother-sucker. Between the two, all the studio’s other face-offs between virginal, lily-white virtue and fat, ugly evil seem two-dimensional.

Though it was based on a book by someone who, as I realized while glancing through the correspondence traded between author Dodie Smith and Walt Disney, you just know instinctively crossed her legs tightly at even the slightest rise in vaginal humidity, the protagonists’ situation in 101 Dalmatians would have to be considered the most extreme case of Disney’s obsessive, procreative initiative. Roger, a gawky London musician peddling post-ragtime ditties from his crumbling flat, shares his life with his devoted and un-neutered dalmatian stud Pongo. The two take a walk and find Anita and Perdita, a woman and her un-spayed dalmatian bitch, both with a little too much self-righteousness and a lot too little personality.

Though both pairs fall in love, respective of their species, Anita quickly adopts a slummy Donna Reed existence, and Perdita gets knocked up, promising a whole slew of surrogate children for their sexless human “pets,” as they call them. If it weren’t for the eye-openingly gritty animation (the result of a new Xerox process that made for more cost-efficient and, though perhaps not Walt Disney’s intention, less embalmed images), the first act of 101 Dalmatians would offer only the promise of ladies, tramps, and a swift allergic reaction for anyone who doesn’t still push meatballs across the plate with their noses.

Enter Cruella De Vil, and what an entrance. After careening her stretch limo wildly throughout the mercifully empty streets, she arrives into the film with the sort of flourish that damn near instantaneously planted the seed for generations of drag queens to come. Based loosely on Tallulah Bankhead, voiced by Betty Lou Gerson, and modeled for animators by Mary Wickes, Cruella De Vil is so much a tour de force that she single-handedly snatches the movie away from any retroactive comparisons to the likes of The Rescuers or Robin Hood or any of the other post-classical Disney features whose sloppiness is their only saving grace. Cruella’s evil isn’t naturalistic a la Maleficent, nor is it the source of secret enjoyment as it is with the corpulent Ursula, to name the only other Disney villains who could possibly compare. Instead, it’s terminal, and creepily mundane.

Cruella affixes a death mask grin as she storms into Roger and Anita’s flat, waving her cigarette holder and trying to keep her behemoth pelt wrapped around her angular, spindled frame. As soon as she’s asked how she is doing, she responds, “Miserable, dah-ling, as usual. Perfectly wretched.” And she means it. As created by animator Marc Davis, Cruella epitomizes fashion-as-death, with a shock of two-toned hair, cheekbones that threaten to pierce through her blue skin and a lack of posture that sends her neck out nearly perpendicular to her back. Already she’s stolen the show, and she hasn’t even begun to hatch her plan to skin puppies and use their fur as a soft coat to match her hair, apparently surmising that since veal is better than chuck, puppy coats trump those of adults.

Occasionally, The Simpsons will temporarily recast C. Montgomery Burns in the image of the super-villains that preceded him. Alongside his parodies of live action baddies J.R. Ewing and Charles Foster Kane was the episode wherein he paid tribute to Cruella by singing “See My Vest,” made from real gorilla chest. It was a nod from one group of animators to one of their medium’s immortal creations, and 101 Dalmatians, if nothing else, brought the Disney brand as close as it had ever or would ever come to embracing their own destructiveness as artists as fully as the Simpsons crew cumulatively has. (They further acknowledge cartoons’ tendency to skirt insipidness with their baby-voiced Kanine Krunchies commercial.)

In the end, though she’s theoretically vanquished mid-puppy-pursuit (her limo suddenly stripped of its chassis to reveal a dragster from hell), Cruella is still left alive to see another perfectly wretched day; you sense the animators couldn’t will themselves to kill her or didn’t even know if they could. But just as Dumbo’s queer little pachyderm sadly did not portend the studio exploring new horizons of the definition of “family film,” Cruella’s jacked-up diva fits gave way to the insipid finale, where Roger’s tuneless “Dalmatian Plantation” makes musically clear there would be no Disney emancipation proclamation for future films.

As the oldest film in the Disney library using a cheaper animation technique, 101 Dalmatians looks dubious if not totally shaggy. Colors are as patchy as a dog owner’s carpet, and most of the pencil lines look as though they’re shedding, but it’s all part of the look-one, I might add, that still looks far more vivid than the stained Plexiglas of Cinderella or the airbrushed genitals of Bambi. The more channels you can get Betty Lou Gerson’s voice to emanate from, the better, so I’d actually recommend the 5.1 remix over the original mono, just this once.

Pongo and Perdita-pimping cover art aside, the producers of this double-disc know which side this film’s (adult) fans butter their buns, as they actually go to the extent of separating their Cruella De Vil documentary material from the overall “making of” in order that it could be featured prominently on its own. My only quibble is that the Cruella sidebar should be 30 minutes and the “making of” about 10, instead of vice versa. Also included are a bunch of irritating children’s games, one of which tells you which Disney character is your ideal “human pet.” While I was expecting to be told I’d most like to hump Gaston’s leg, I ended up being told I’d be ideal for.Roger and Anita, which I guess figures since 101 Dalmatians is one of the small handful of Disney films I wouldn’t try to bury in my backyard. Rounding out the full set is a reenactment of the dull correspondence between Walt Disney and Dodie Smith (with much “I do so hope this” and “I’d be ever so that” business), a collection of deleted songs that justify Cruella’s dismissive “Oh, that’s right, you have Roger’s songs to support you,” and yet one more installment in the Disney DVD jukebox from hell, this time Selena Gomez’s “Cruella De Vil,” which interpolates both Janet Jackson’s “Black Cat” and En Vogue’s “Free Your Mind” (which doesn’t mean that she’s a prostitute) and also proves that the film’s dalmatians are outnumbered by disposable Hannah Montana spin-off acts.

So long as Disney’s never made any bones about finding the whole female race either bland or evil, I have no trouble embracing the studio’s biggest bitch of them all.