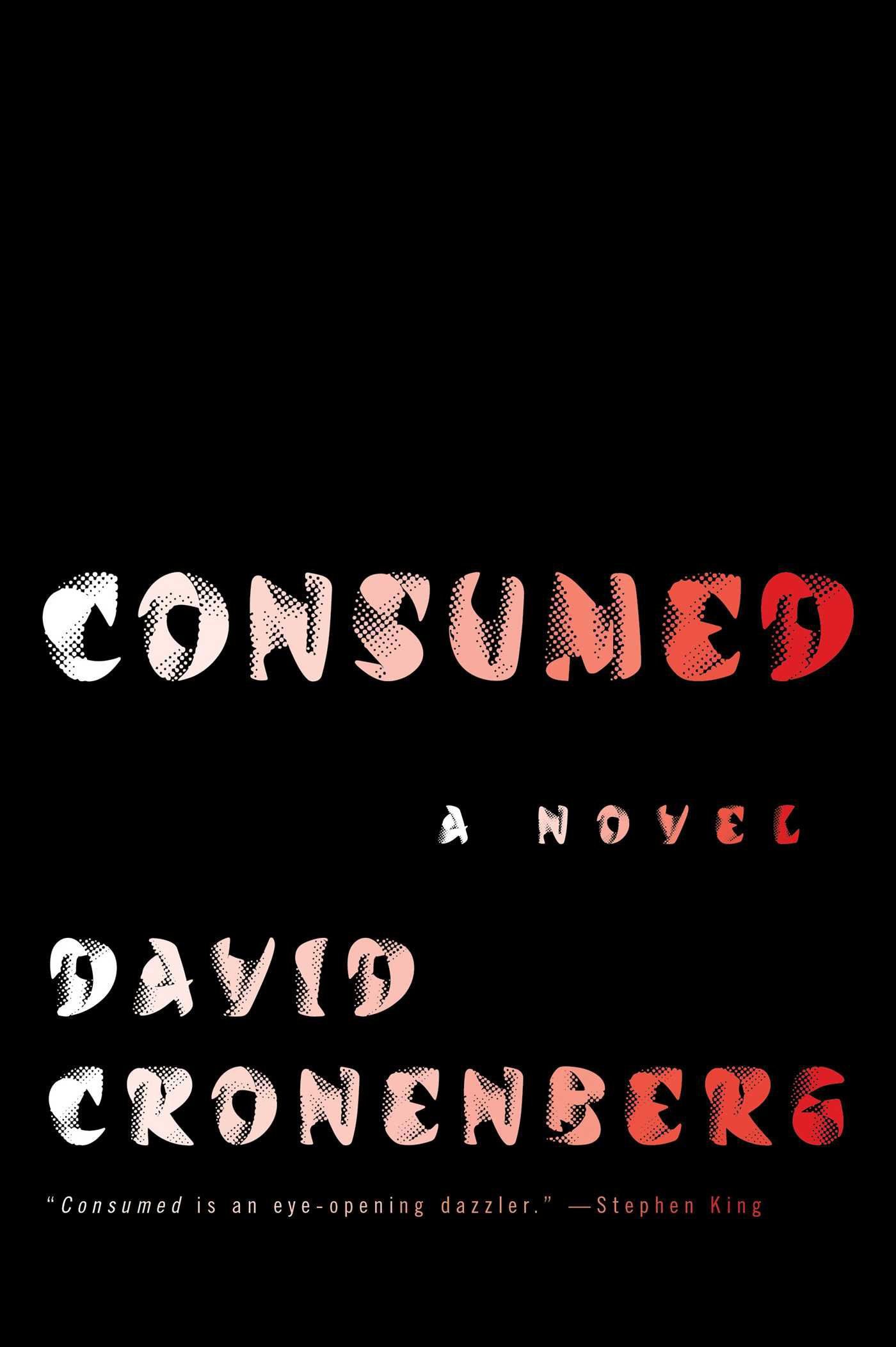 David Cronenberg’s Consumed is clearly the work of the impresario of body horror. The novel suggests a print fusion of the filmmaker’s early, grungy, bluntly metaphorical work with the subtler, formally refined, classical elder-statesman films of his most recent period—and the contrast of those sensibilities allows for occasionally quite effective shocks. The prose is chilly and erudite, suggestive of Nabokov and, particularly, of Ballard, which will resonant with fans of the director’s Crash. In the tradition of those authors, Cronenberg sweeps you up in the pure power of his aesthetic command, coaxing your guard down so as to spring perversities that eventually cast the entire book in unsettling hues of twisted inevitability. Cronenberg isn’t moonlighting; he’s a real novelist.

Naomi Seberg and Nathan Math—the names are clues—are 21st-century yellow journalists who thrive on the instability culture of YouTube, Twitter, and TMZ. Nathan, who has aspirations to write for medical publications, is given to justifying his more exploitive story choices; Naomi, though defensive about her lack of intellectual bona fides, more instinctively gets off on the kill of nailing a scoop. Both of them, it’s explicitly established, are married to the endless variety of phones, cameras, and recorders that Cronenberg details with an agency that’s at once enticingly sexual, banal, and actively off-putting. The author frequently attributes human characteristics to the journalists’ tools of the trade, while assigning mechanical attributes to the humans themselves; as in his films, he’s equally repulsed and aroused by innovation as a pathway toward evolution that paradoxically dehumanizes our species. In an early seductive passage, a woman’s struggle to look upon Nathan is described as a “process so electromechanical that it seemed photographic.” A subsequent sex scene is writ so metaphorical as to slyly, deceptively, outline eventual late-act revelations:

And she swooped down to within centimeters of his cock-head and started snapping, the phone making an absolutely delectable shutter sound, reminding Nathan of the Australian lyrebird that would replicate the shutter sounds of forest paparazzi to seduce a mate. Or was it a more sinister thing? Was the iPhone a malevolent, protean organism, the stem-cell phone, mocking him who had cameras with real physical shutters whose sound you couldn’t turn off? Promising to replace every other device on earth with its shape-shifting self—garage door openers, solar timers, television remotes, car keys, guitar tuners, GPS modules, light meters, spirit levels, you name it?

Fans of the director will recognize that we’re in “new flesh” territory here. Consumed finds Cronenberg grappling with the fashions with which the Internet and all its attending gizmos are changing us. The novel is also a broad lampoon of intellectual gamesmanship, of those who might stew, aloof from society, in their own gilded landscapes under the pretenses of cultivating a higher cultural standard that are so rarefied as to prove globally useless. Naomi and Nathan, partially unbeknownst to the other, are investigating the legendary and controversial French philosopher couple Célestine and Aristide Arosteguy, consumerist critics—think hybrids of Susan Sontag and Jean-Paul Sartre, the latter of whom is directly name-checked—who achieved great global infamy when the latter was accused of butchering and eating the former, before fleeing France to evade the authorities. Typical of Cronenberg protagonists, Naomi and Nathan see themselves as more urbane and debauched than they actually are, until they brush up against the real, potentially society-redefining, McCoy.

Initially, Consumed is a more or less traditional missing-person mystery, gorgeously written, but just a touch dull. No pretense is made about the fact that Naomi and Nathan are reader surrogates, firstly and only. Pointedly, we’re drawn again and again to those sleek and seemingly unending descriptions of their white-collar hardware, and that’s all well and good and thematically and hermetically neat, but those distressingly traditional and bourgeoisie readers among us might find themselves hoping for an actual character or two. The introduction of Aristide Arosteguy throws a wonderful kink in the works: He’s basically Kurtz as a caricature of the hopelessly pretentious French intellectual, and Cronenberg’s prose is up to rendering his eccentricities vividly amusing, frightening, and even moving, though the last is revealed to be pivotal act of misdirection.

Secretly, I lusted after Célestine as I always had—secretly, because it was not allowed that I could evade our synchronized aging by lusting now as I always had lusted. I was allowed to express my desire to her, but it was necessary for her to laugh it off in disbelief, the delusions of an old man, possibly the first signs of senility, if not dementia, in her own private senex. It was as though my unabated, youthful lust was by its very existence a reproach to her for her own brutally truncated lust, now feebly supported by the stratagems I’ve just described.

This passage—a clinical, self-aggrandizing put-on that’s poignant in spite of those qualities—primes you for an almost Roth-ian final act that never emerges. It’s reasonable, after 50 pages that proceed in this fashion, to expect the mystery of Aristide killing and eating Célestine to be resolved conventionally as a crime of the heart that merges cannibalism with the novel’s various other symbols to impart a lesson about consumerist society eating itself up. That’s partially what happens, but Cronenberg arrives at his consumptive despair via a third act that’s so convoluted and rigorously insane as to defy any succinct summary—except to say that it hauntingly literalizes social technology, as insects eating away at the human body, with an inventiveness and sense of righteous irrational danger that contemptuously destroys any traditional “human interest” emphasis. Consumed is a critique of technologically enabled myopia, yes, but it’s also a scalding parody of the pitiful sentiments that we attach to our gadgets, or to imaginary characters, so as to justify spending so much of our lives essentially playing with ourselves, figuratively eating ourselves alive, oblivious to an outside world that’s following literal suit.