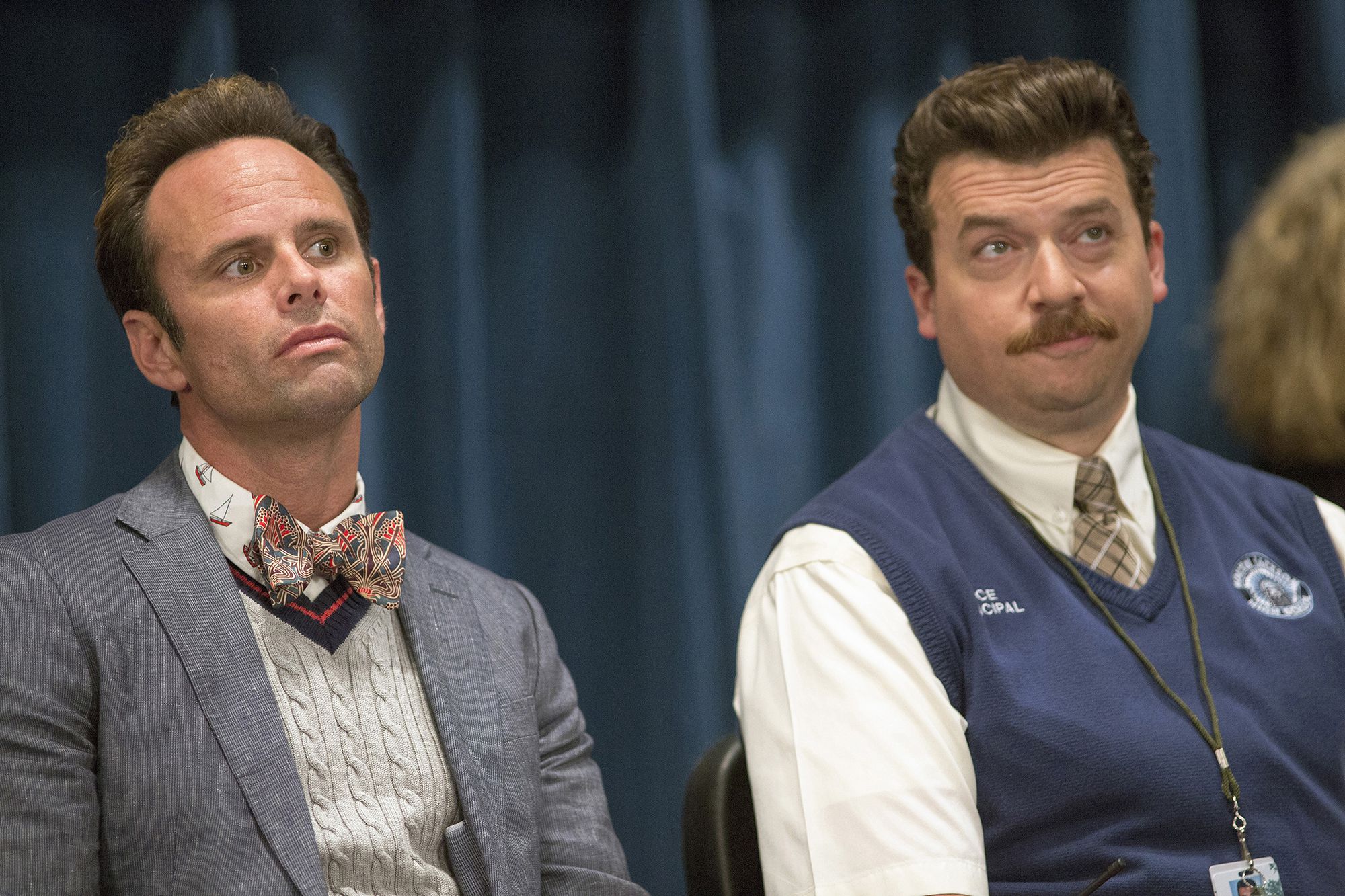 The comparisons between Vice Principals and Eastbound & Down, creators Jody Hill and Danny McBride’s prior comedy for HBO, are unavoidable. As Neal Gamby, a capable, rule-driven subordinate to Lincoln High School’s retiring head principal (Bill Murray in a brief cameo), McBride once again embodies the very spirit of the prideful, easily bruised male ego, and writer-director Hill centers the series on Neal’s not-always-legal exploits and never-ending humiliations. Neal may never be quite as foul-mouthed and raunchy as Eastbound & Down’s Kenny Powers, but as conceived by Hill and McBride, the man is a similarly self-obsessed would-be alpha-male who proves incapable of making the world take him all that seriously beyond the meager control and influence he wields. Vice Principals suggests that Neal’s particular brand of incessant and aggressive displays of entitlement are outdated, unwanted, and preposterous to 99% of the world around him.

But where Kenny Powers insisted on stealing any modicum of attention available from those around him, Neal is less self-aggrandizing, clearly a result of his lack of self-confidence. At one point, he has to be psyched into socializing with the other teachers at Lincoln High by a cafeteria worker, Dayshaun (Sheaun McKinney), who seems to be his only “friend” in the world. And with the image of Neal triumphantly raising his arms and kicking back in his recliner, inside a sparse apartment where his few belongings are piled up in a corner, Vice Principals’s creators give a full sense of the echoing loneliness that dominates the man’s life.

This feeling of alienation and desperation can be felt in the show’s tightly composed shots of Neal’s everyday life, and underlines his obsession with beating Lee Russell (Walton Goggins), the school’s far more sociable co-vice principal, for a promotion. At first, the two simply trade digs at each other, but when it’s revealed that the school has hired Dr. Belinda Brown (Kimberly Hebert Gregory) as the new principal in lieu of promoting Neal or Lee, they band together to dethrone her. That’s the rub, essentially, and Hill, McBride, and the writers make this vision of unhinged, ugly ambition hilarious at every turn, using the familiar tropes of high school movies to uncover another layer of Lee and Neal’s unerring and uncouth dedication to running Belinda out of town. This climaxes early on when they break into Brown’s house and decimate the place in an astonishing expression of their most basic, primitive impulse to dominate and humiliate their perceived enemy.

Can one have serious professional ambition and still be a decent, upstanding member of society? That seems to be the question at the heart of Vice Principals, and the mad desire to find respect, power, and likability, even in a realm as relatively small as a South Carolina high school, consistently trips up Neal and, to a lesser extent, Lee. That may explain why the show’s aesthetic is generally polished and innocuous, only for it to exhibit more experimental flourishes—such as slow motion accompanied by the near-anthemic synths of Joseph Stephens’s score—whenever Lee and Neal privately put into practice their usually worst-laid plans. And through it all, their callow fight against the straight-shooting Dr. Brown, who’s cutthroat, but clearly quite experienced, provides a wildly funny, searing take on the thinly veiled need for white men to displace women and minorities as the alpha in any given situation.

Ultimately, the primary division between the two lead characters is style. Where Lee uses charm, a vibrant wardrobe, and good manners to hide his more manipulative ends, Neal is more or less incapable of shrouding his professional aspirations, and his disappointments, humiliations, and rare triumphs are painted all over McBride’s face. Vice Principals is the story of an unlikely partnership, and Goggins and McBride prove deliriously entertaining in evoking Neal and Lee’s rocky relationship and oft-guarded passions. Even when they indulge their most risible and horrid instincts, there’s a palpable melancholy to these characters that can’t be easily dismissed—a realization that took Eastbound & Down a season or so to arrive at. In the case of Vice Principals, this impression is felt almost immediately, and this uneasy feeling lends a bruising nature to even the show’s biggest laughs, like the proverbial wooden ruler slamming against your knuckles.

Watch a Recap of Season One of Mr. Robot