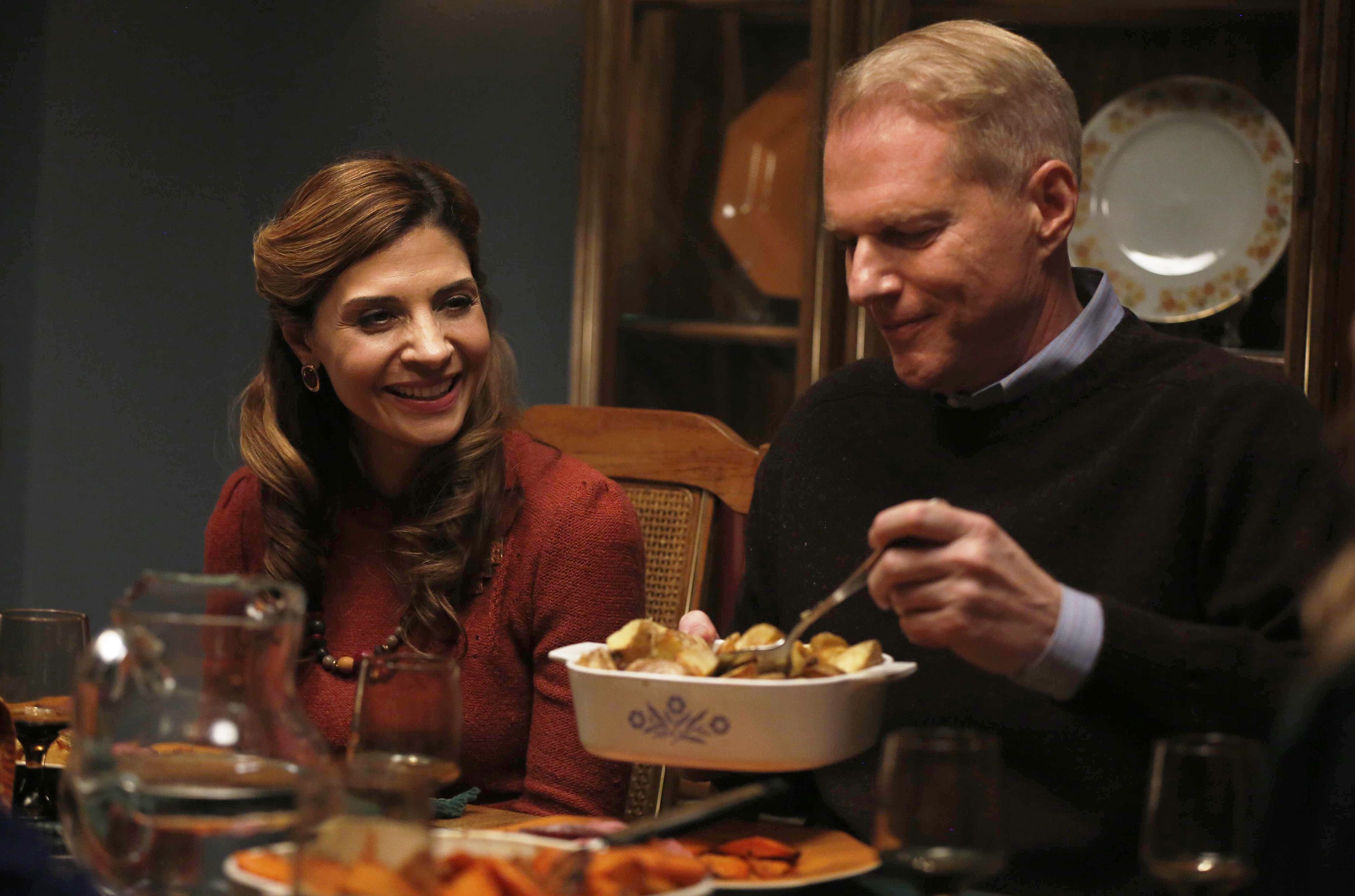 Tonight’s episode of The Americans is quieter than usual, with the most suspenseful sequence sandwiched into the space between a teenager’s bedroom and her father’s home office, but “Born Again” carries the weight of the truth through its series of tremulous encounters. Though cloaked in the familiar guise of dissimulation, used to pry a strategic advantage from each terse exchange, the admission, the confession, and the honest assessment all emerge here as singularly effective modes of persuasion, as if to suggest the limits of lying. “When we immerse ourselves in these baptismal waters, we symbolically allow God’s grace and forgiveness to wash over us,” Pastor Tim (Kelly AuCoin) says as Paige (Holly Taylor) prepares for her new birth in Christ, and “Born Again” is indeed a turning point. Whether the characters will turn further toward truth or retreat into fiction remains to be seen, but the moment of decision is upon them.

The episode ultimately achieves this end with a few brilliant bits of poetic formalism, but at the outset it’s right there in the performances. As Pastor Tim praises Paige’s commitment to nuclear disarmament and the anti-apartheid movement, then proceeds to submerge her in the baptismal water, Philip (Matthew Rhys) and Elizabeth (Keri Russell) look on with concerned, stony faces, only feigning happiness when their daughter turns to them with a bright-eyed smile. Paige’s religious conviction has long been fodder for argument on The Americans, but it’s this wordless juxtaposition that reduces the issue to its most elemental question: Where does parenting end and independence begin?

Philip, for his part, endorses Paige’s choice, if not in itself, then at least in what it represents for her seemingly inevitable confrontation with the truth about her parents. “You can always do that, you know,” he says. “Stand up for what you want. You should never feel pressure to do anything that you don’t feel is right for you.” That Paige takes this as just another hectoring warning against the dangers of drugs and alcohol is one of those domestic grace notes that The Americans does so well, and yet it’s telling that Philip wants to make sure she’s listening closely. He means what he says.

The more obviously tumultuous relationship Paige has with her mother is on display when she walks in on Elizabeth sneaking a cigarette in the garage, provoking the panicked response of, well, a teenager caught breaking the rules. Elizabeth clearly finds Paige’s spiritual independence more troubling than Philip, but she doesn’t try to pretend either—about her smoking, about her daughter’s praying, or about the gulf that’s grown between them, emblematized by the confounded expression that flashes across her face when Paige reveals that she and Henry (Keidrich Sellati) already know about their mother’s bad habit. “I’m just impressed with you, that’s all,” Elizabeth explains. “You’re just all grown up all of a sudden.”

This frank impulse drives even the episode’s minor plotlines. Stan agrees with Henry at dinner that EST “sounds weird” and admits to Tori (Callie Thorne) that he’s thinking about Sandra (Susan Misner) while they’re making out on his couch; even Nina (Annet Mahendru), scarfing down wine and a hot meal as a reward for her betrayal of Evi (Katja Herbers), uses the confession that she “had two lovers, one communist, one capitalist” to win her cellmate’s trust. Yet, as the characters come closer and closer to the point of no return, the need to maintain operational distance from the relationships they’ve forged becomes increasingly difficult. Nina’s silent, impassive stare at the wall as soldiers remove Evi from the room is absolutely chilling, in part because Nina has been on the receiving end of such sincere deception: Stan and Oleg really did love her, even if, as Nina says, “they loved their countries more.”

The second half of “Born Again” features a number of tautly composed images that jostle against each other as if conflicting emotions. After a close call with Kimmy (Julia Garner), as the KGB asset (Mira Rakhmanova) plants a listening device in Kimmy’s father’s briefcase, hands over her earrings, and barely escapes detection, Philip returns home with a joint. Framed side-by-side in the open window, he and Elizabeth are momentarily on equal footing, chuckling over jokes about Jesus, and it’s the warmest exchange between them in what feels like ages—nothing forced, nothing secret. Later, after Gabriel (Frank Langella) instructs Philip to initiate a sexual relationship with Kimmy to maintain weekly contact, and reveals that Philip’s former lover, the mother of his long-lost son, has been captured by the Soviets in Brazil, “Born Again” inverts the good feelings that came before. In the darkroom’s lurid red light, the camera captures the break in Philip and Elizabeth’s tenuous connection: He tells her the news about Kimmy and quickly departs, leaving Elizabeth to tower alone in the shot’s foreground, contemplating her next move.

The seven-minute sequence that concludes the episode returns to juxtaposition to express discontent, only here Philip and Elizabeth no longer constitute a united front. It’s a remarkably honest moment for each of them, as Philip tells Kimmy about his son and Elizabeth tells Paige about her radical involvement in the civil rights movement, but these decisions are rooted in a certain mutual mistrust. Gabriel’s subtle attempts to pit Philip and Elizabeth against each other seem to be working, for both choose to acknowledge the truth to children, rather than confront it together. “I failed him. I never took responsibility for anything,” Philip says of his son. “I brought you here because I wanted you to know that I’m more like you than you think,” Elizabeth says to her daughter. “Born Again” suggests a cleansing, a fresh start, but in the end both Philip and Elizabeth return to the ruts of the past. Jesus may be able to absolve us of our sins, but that doesn’t mean he’ll erase them.

Review: The Returned: Season One