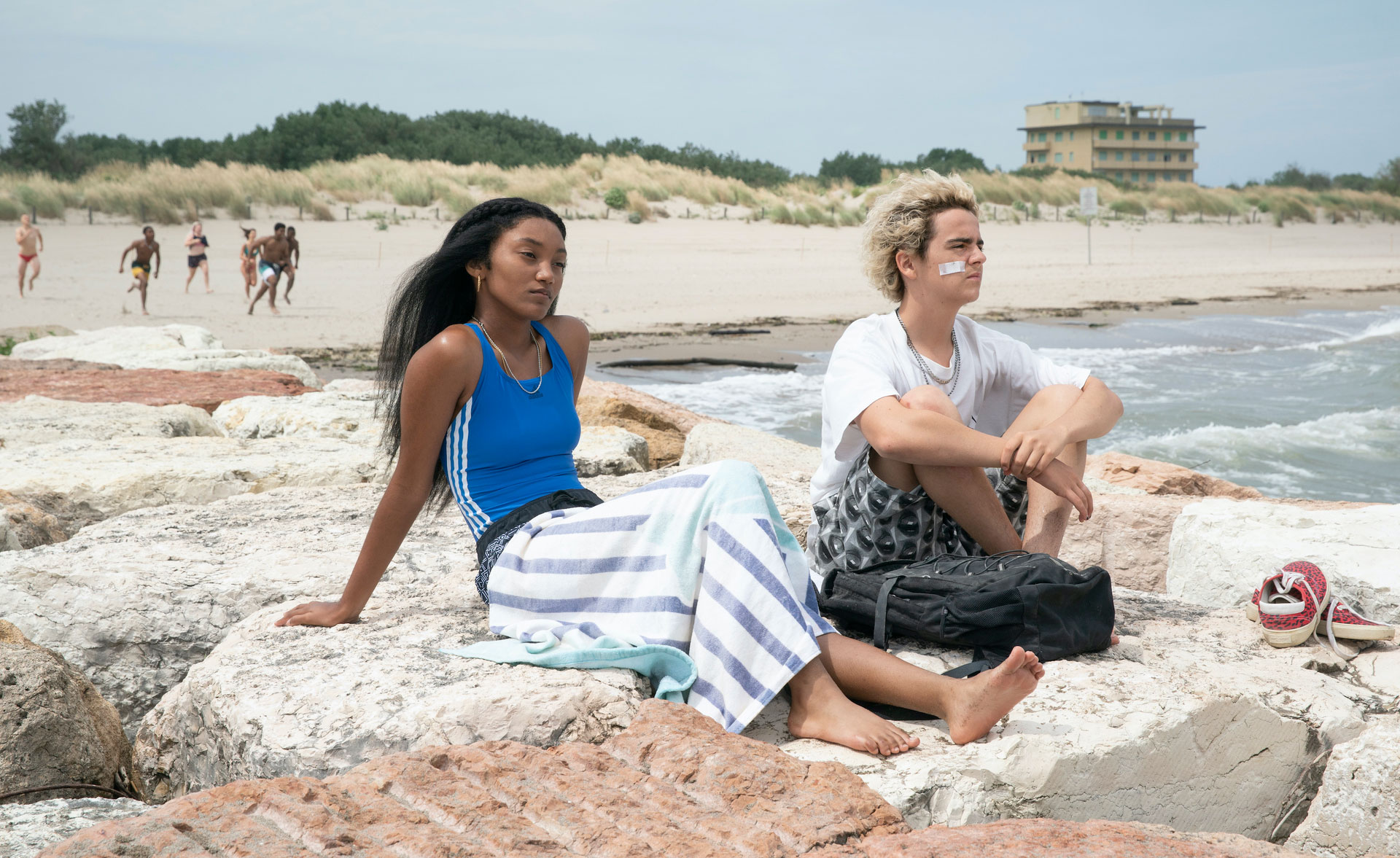 With his loud clothes and bleached hair, 14-year-old Fraser Wilson (Jack Dylan Grazer) sticks out on the U.S. Army base where he lives. He spends much of the first episode of director and co-writer Luca Guadagnino’s We Are Who We Are in animal-print shorts long enough to function as pants, being restless and fidgety and a detached nuisance in that post-adolescent sort of way, taking pictures of people inside classrooms or running through the middle of a basketball game between recruits. One of his mothers, Colonel Sarah Wilson (Chloë Sevigny), has been put in charge of a garrison in Italy, so they—he, Sarah, and his other mom, Maggie (Alice Braga)—have relocated from New York, to Fraser’s dismay.

Especially when its yoked to Fraser’s perspective, the series makes the base feel vibrant and alive, given the Altmanesque use of overlapping conversations and diegetic music. Peripheral characters are always conspicuously doing things in the background, like buying food or running drills. The boy seems volatile and strange, in ways perhaps explained by the sensory overload of his POV; he’s an observer and there’s almost too much to observe, with dialogue and actions often carrying on out of frame. Fraser feels compelled to center himself in his own world, doing things like balancing precariously on a bridge railing or intruding on Italian homeowners sewing outside, though sometimes he allows himself to be guided by new acquaintances, like fellow army brat Britney (Francesca Scorsese).

When the second episode of the series replays many of these same overlapping events from the perspective of Caitlin Harper (Jordan Kristine Seamón), the repetitions don’t feel gimmicky so much as a natural result of the show’s densely packed structure. Conversations that were tangential and difficult to follow for the easily distracted Fraser are given clearer focus due to Caitlin’s more confident, pensive demeanor. She’s already familiar with the environment, having been at the base long enough to form a friend group that includes other teens like Britney and Caitlin’s high-strung brother, Danny (Spence Moore II). And with the additional perspective, throwaway lines from the first episode take on new meanings. For example, Sarah’s remark to Jenny (Faith Alabi) about respecting faiths other than the base’s dominant Christian demographic gains a patronizing quality when we learn that Jenny is Danny’s mother and that he’s experimenting with the Islamic faith that she left behind, seemingly at the behest of her domineering husband, Richard (Scott Mescudi, a.k.a. Kid Cudi).

Of the four episodes made available to critics ahead of We Are Who We Are’s premiere, the other two sync up more traditionally as Caitlin and Fraser begin to spend time with one another. Being the new kid on the base, Fraser lacks any of the preconceptions of Caitlin’s friend group, so he becomes an ideal confidante for her experiments with gender expression. Going by just “Harper,” Caitlin tucks her long hair beneath a hat and hits on Italian girls in town, while subtly rebuffing guys elsewhere with a quick, “I don’t speak Italian.”

The series concerns itself with boundaries and the way they blur, namely the differing standards of young adulthood between Italy and the base that technically functions as the United States. In one scene, Britney drags Fraser to the beach because he’s allowed to drink off base. By spotlighting this interplay, the series emphasizes how we create so many of these boundaries ourselves, whether in our own heads, through procedures, or in accordance with society at large, along lines of political affinity, relationships, and sexuality.

The most significant boundary separation in the series, then, is the one between childhood and adulthood, which is hardly a rigid one. Accordingly, the kids sometimes seem wise and mature and accepting beyond their years only to fly off the handle and engage in that distinctly teenage brand of solipsism, where the people around you don’t matter nearly as much as you and your own feelings. They’re able to be pretentious and profound on entirely their own terms, rather than seeming like mouthpieces for middle-aged screenwriters. They leave atrocious messes in their wake, badger a lot of people, and act downright annoying, which feels true and honest in a broader sense than the occasional small detail that rings false. They have the space to change, while the adults ruminate on the decisions—the marriages, the jobs, the beliefs—that they’ve long since committed to. We Are Who We Are explores a world that’s opening up to these kids just as it is, in many ways, preparing to snap closed.

Review: The Third Day Leans Heavily on Mystery at the Expense of Human Drama

Review: I May Destroy You Boldly Dissects Notions of Sexual Assault and Consent