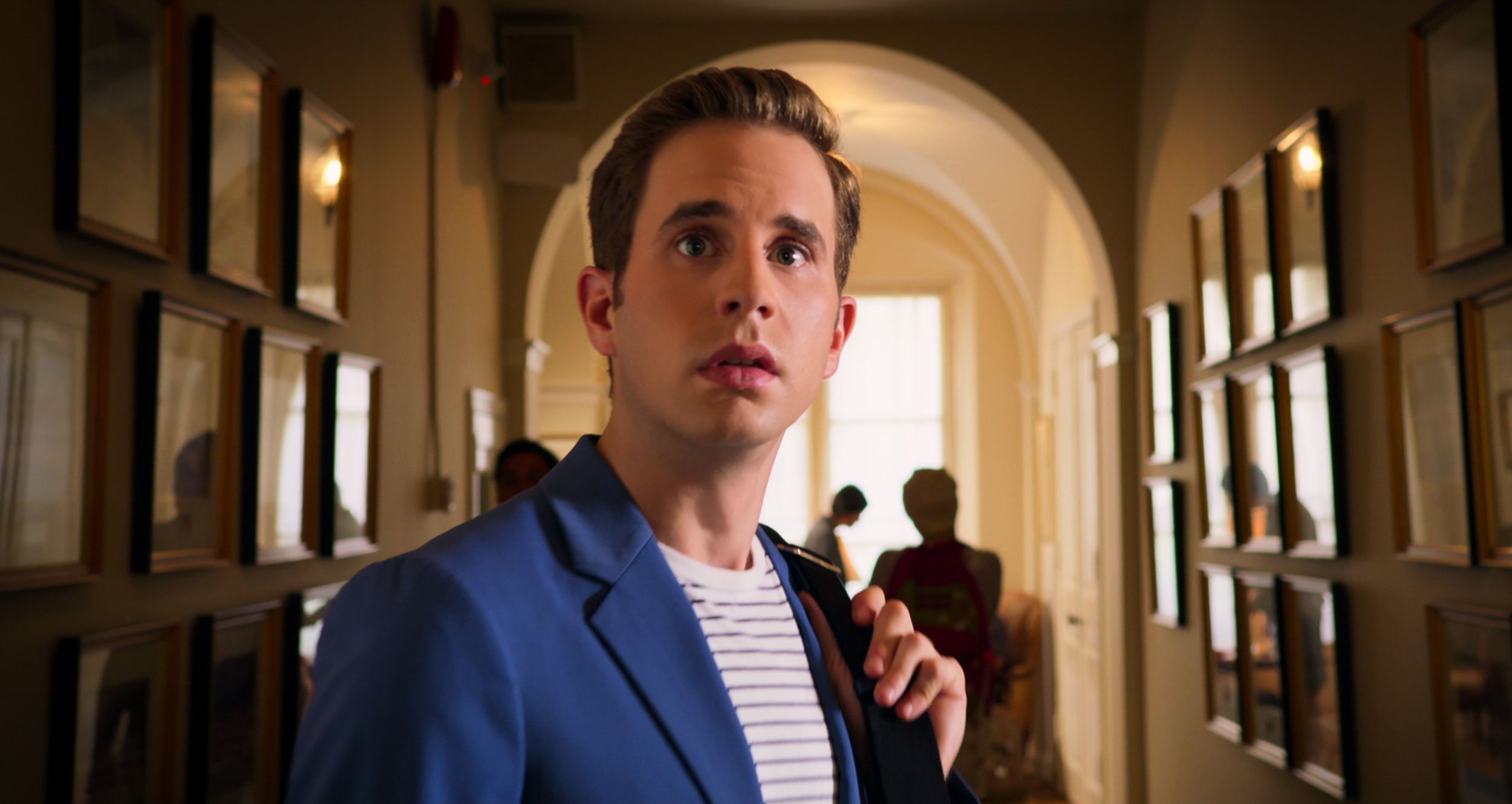 Payton Hobart (Ben Platt), the uncannily poised future politico at the center of Netflix’s The Politician, carries himself with the unsettling polish of a young beauty pageant contestant or an overly coached child actor. Platt portrays the high school senior, who’s in the midst of a hotly contested campaign for class president, with a cold remove informed by the character’s unfettered ambition: Payton views the race as his first in a lifelong campaign for the presidency of the United States. And while the series—co-created by Ryan Murphy, Ian Brennan, and Brad Falchuk—thoughtfully examines the relationship between Payton’s ruthless drive and his own mental health, its most timely and resonant insights derive from its satirical appraisal of the kabuki histrionics of real-world political theater.

By Payton’s own admission, he’s been campaigning toward the White House for his entire life. His lofty aspirations and carefully curated persona suggest a scarcity of authenticity in real-world politics, and by framing Payton as an obviously desirable candidate, the series emphasizes that such scarcity is pervasive even among politicians with thoughtful policies and unmistakable sincerity. The Politician derives provocation from its differing portrayal of its main character’s potential to govern and the questionable lengths he goes to for the chance to do so—such as burying a scandal to protect his running mate, or coldly dismissing his campaign advisors, who are his childhood friends, when he no longer needs them.

Little about Payton’s physical world is meant to echo the reality of daily life. Instead, the show’s primary location, Santa Barbara, is a reflection of his privilege, a world that seems to expand to fit his needs. A crucial scene that unfolds in the high school’s cavernous chapel finds Payton’s running mate, Infinity (Zoey Deutch), surprised to discover that the school even has a chapel. Likewise, the Hobarts’ estate grows from scene to scene, as horse stables, lush living areas, and new corners of the manicured grounds are continuously revealed. Part real-estate porn and part lurid portrayal of privilege, the show’s Technicolor universe lends an ostensibly mundane high school election an air of high-stakes gamesmanship. Strategy meetings and clandestine conversations unfold in exquisite mansions with breathtaking vistas, while Payton races around town in a creamy-white Alfa Romeo speedster. The Politician convincingly implies an inherent correlation between a person’s class and their perceived importance.

Memorable performances abound, from Gwyneth Paltrow as Georgina, Payton’s rich but joyless mother, to Jessica Lange as Dusty, Infinity’s manipulative grandmother. The series derives the majority of its success, though, from Platt, who commits convincingly to Payton’s elevated self-image. When scandal threatens Payton’s campaign, the veteran theater actor appears fully unhinged, all bulging neck veins and watery eyes; conversely, he can be placid and smooth when Payton is manipulating his opponents or courting voters.

When the series attempts to underscore the roots of his political appeal, Platt leverages his talent for penetrating emotional communication. Payton, a kind of stage performer himself, always plays to the back row, as in a stirring speech about gun control or when, at a school assembly, he dedicates a Joni Mitchell song to a recently deceased student. In such instances, The Politician prompts us to interrogate our own reaction to Payton’s charisma, and consider the possibility that we’re being duped—a dynamic made possible by Platt’s performance.

The actor’s portrayal of the strangely polished Payton is backgrounded by constant, near-hysterical drama. Throughout the season’s eight episodes, there’s one suicide, another unrelated suicide attempt, three attempted murders, one kidnapping (which the series frames as a wry parody of David Fincher’s Gone Girl), and a host of political scandals that range from falsified illnesses to teenage love triangles. And much of this subject matter, especially when related to teenage depression or mental illness, is gravely paralleled in the real world.

But as The Politician bounds along, it rarely focuses squarely on the fallout of those issues, or on the source of Payton’s own ambition. Such plot developments serve instead to reinforce the stakes of Payton’s campaign for class president as he views them: life or death. The series is similarly matter-of-fact when dealing with the sexuality of its characters, many of whom, including Payton, are sexually fluid—a fact that The Politician acknowledges without comment. The sexual entanglements and desires of its teen characters provide dramatic incitement rather than emotional heft, in the same way that the show’s suicides and kidnappings are deployed primarily as obstacles to Payton’s political ascension. The series nearly approaches farce as the shocking developments pile up, defying reality and credulity. Still, each of The Politician’s strange twists and turns feel like appropriate obstacles for its larger-than-life protagonist. Payton insists that he’s destined to wield power over his surroundings, so it’s fitting that those surroundings are somewhat preposterous.

The Politician balances well-honed satire and melodramatic frenzy, succeeding in its aim to engender both a critical appraisal of real-world politics and grotesque car-crash voyeurism. Both of the show’s competing sensibilities flow from Platt’s captivating performance, and one’s enjoyment of the series will largely depend on one’s take on Payton. While the young man is of plainly dubious moral character, the series resists condemning his actions. Instead, it offers a view of the candidate as a force of nature, struggling within a hypothetical vision of pure politics with the volume dialed up. The show’s high school election functions as a petri dish for the most debased, selfish elements of American politics, and implicates the audience as primitive rubberneckers for investing in its outcome. The Politician’s most trenchant critique, though, is reserved for Payton, who’s obsessed with lording over a broken system, yet doesn’t even possess the self-awareness to understand why.

Review: Bless the Harts’s First Episode Is a Madcap, If Uneven, Introduction