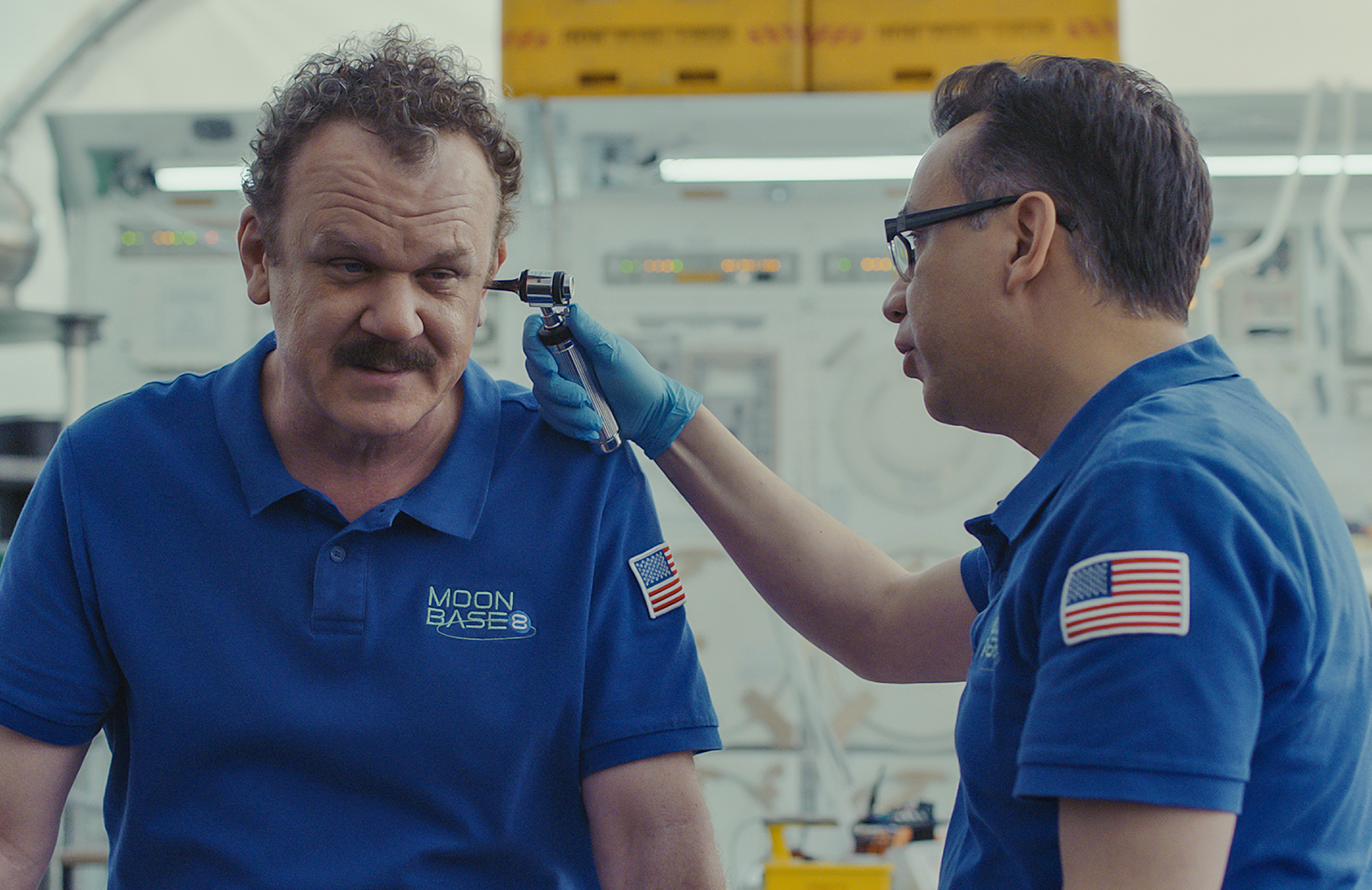 Over the past decade or so, Tim Heidecker’s work has walked a fine line between accessibility and postmodern provocation, without ever being anywhere near as pretentious as that might sound. His ongoing On Cinema web series is perhaps the most ambitious example of his stylistic gambit, taking a simple premise that seems to mock the very idea of entertainment and developing it into a fully realized fictional universe. Released at the tail-end of a 12-month period that has been fruitful even by the multihyphenate’s standards, Moonbase 8 does away with almost all of the conceptual aspects of his previous work, offering some of his most straightforward comedy to date.

Set mostly within the confines of a small NASA training facility in the middle of the desert, the Showtime series concerns three would-be astronauts (Heidecker, Fred Armisen, and John C. Reilly) who are preparing to further mankind’s noble dream of exploring beyond our own planet, despite being either unwilling or manifestly incapable of doing so. Very little information is ever given about the lunar program that they’re supposed to be part of, and we mostly see them dealing with the more mundane mishaps that befall their moonbase simulator, in various contrived sitcom-style scenarios.

Though Moonbase 8, which was directed by frequent collaborator Jonathan Krisel, is marked by their brand of stone-faced irony, it also leaves the impression that they believe that the idea of incompetent astronauts is hilarious in and of itself. The series shares elements of Decker’s ridiculous genre pastiche and the studied anti-humor of Beef House and the recent An Evening with Tim Heidecker, but it often suggests a more conventional comedy in the vein of Danny McBride’s Eastbound & Down, with jokes that are intended to be taken at face value.

This is relatively new terrain for Heidecker, and Moonbase 8 doesn’t always strike the right balance between mocking its characters and itself. With the deliberately cheap, trashy TV aesthetic of his other work replaced with a more cinematic sheen (including an excellent soundtrack by Flaming Lips guitarist Steven Drozd), and situations that are more grounded in some form of reality, the show’s tone at times feels oddly flat, lacking the satirical edge, metatextual tension, or surreal flights of imagination that fuelled his best output.

As the season progresses, we see the unlikely spacemen start to become a little more rounded, though there’s never anything as predictable or relatable as a character arc to disrupt the show’s absurdist flow. The tone is usually set by Reilly’s Cap, a divorced, failed businessman looking to regain some self-respect by going to the moon. He serves as the show’s emotional center of gravity, with the unique balance of pathos and goofy inarticulacy that has served Reilly equally well in such varied work as Magnolia and Check It Out! with Dr. Steve Brule.

Moonbase 8’s more character-based comedy comes into sharpest focus in episode four, where the team’s insecurities and foibles are exposed by an encounter with another group of younger, fitter, more qualified SpaceX trainees, including Alia Shawkat and Thomas Mann. These recruits temporarily, and more effectively, take on the straight-man role that’s often filled by Armisen’s Skip, the son of a former NASA astronaut and the group’s passive-aggressive leader.

While Moonbase 8 leans on more traditional comedy tropes and setups than Heidecker has used before, his own performance teeters between embracing the show’s premise and wildly sending it up. He plays Rook, formerly a self-described “Phish-head…obsessed with the music of the band Phish” who’s now a born-again Christian, urged to go to the moon by his pastor in order to spread the Gospel. Rook displays the smug confidence and naïve incompetence that’s become Heidecker’s trademark persona, but without the occasional outbursts of narcissistic rage. Casually confusing Elon Musk with “Leon DiCaprio,” or flatly answering, “I’ll take her any way she comes,” when asked for his favorite phase of the moon, Rook allows Heidecker to deliver another master class in deadpan line delivery, and prove that there are precious few other actors who can wring so much humor out of a small remark or turn of phrase.

Indeed, much of the joy of Moonbase 8 comes from watching three of the greatest comic performers of their generation play off of each other, demonstrating their individual ways of developing a simple character and elevating a basic, formulaic workplace comedy into something entirely unique. The series might lack the audacity and boundary-pushing of Tim and Eric Awesome Show, Great Job! or Mister America, but it has enough low-key moments of invention—like the trio taking time out from their training to gamely participate in product testing for a new Snickers bar, or a climatic celebratory dance in newly delivered NASA jumpsuits, soundtracked by Billy Joel—to make you want to see what direction this star-studded lunar vehicle is going to steer toward next.

Review: Between the World and Me Is a Sharp, If Visually Limited, Social Document

Review: Season 3 of Star Trek: Discovery Remains Stuck in the Future’s Past