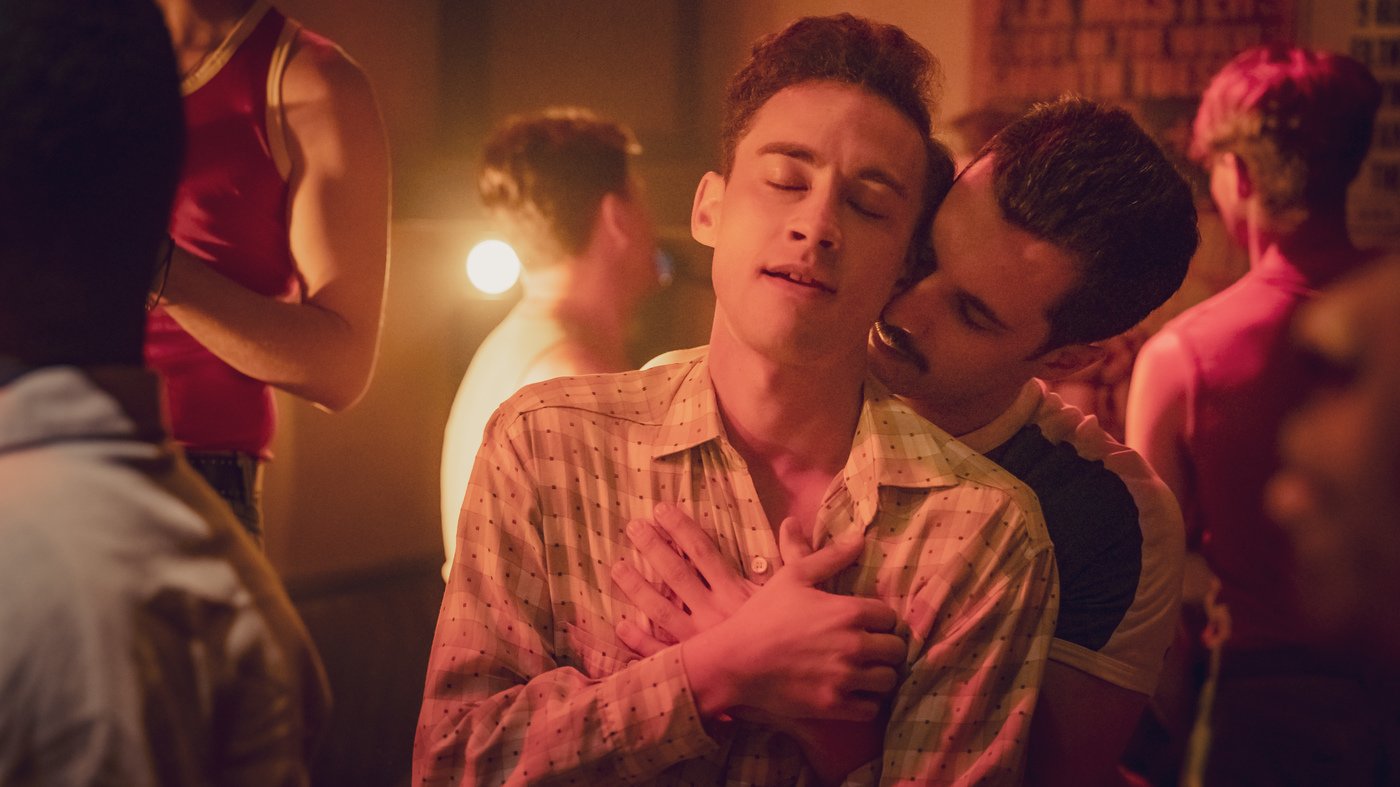 Russell T Davies’s It’s a Sin follows a quintet of London friends through an eventful decade (1981 – 1991) marked by (a)rousing queer passions, political/familial turmoil, and the emergence of a disease that leaves a genocidal mark on a profoundly epicurean community. Davies knows this terrain well, having mined his own experiences as a gay man in prior works like the revolutionary U.K. version of Queer as Folk and its tragicomic companion piece, 2015’s Cucumber. But he’s never directly touched on the AIDS epidemic until now.

A number of films and TV shows have exploited this era for sentimentalized, woe-is-us pathos, but Davies has never been partial to pity. What distinguishes his work is how vivaciously alive and uproariously funny it tends to be, even as your heart breaks. The first episode of It’s a Sin details the coming together of college-age Ritchie (Olly Alexander), Ash (Nathaniel Curtis), Roscoe (Omari Douglas), Jill (Lydia West), and Colin (Callum Scott Howells) with a similarly intoxicating energy as Queer as Folk, and a no-less iconic rimming scene between Ritchie and Ash that gives new meaning to the phrase “the great unwashed.”

It goes without saying that, in creator and writer Davies’s world, two strangers can effortlessly segue from eating ass to being best buds. And there’s something truly sublime about the way that Davies, director Peter Hoar, and cinematographer David Katznelson visualize the development of the group’s friendship in time-collapsing, tracking-shot-heavy shorthand. By the time they’ve taken over a loft that they nickname “The Pink Palace,” Ritchie, Ash, Roscoe, Jill, and Colin have the casual rapport of many a makeshift family. One especially lovely detail: the way the group always greets each other with a simple, spirited “La!”

Bonds are quickly tested by the new illness, first called GRID, that’s being whispered about in gay clubs. Aspiring actor Ritchie, in particular, cavalierly dismisses the danger because the rumors seem like something concocted by the repressive powers that be as a way of upending the big-city bacchanal that’s liberated him from his small-town upbringing. At first, the disease affects people on the group’s periphery, as with a character—played by a famous American gay actor sporting a posh British accent—who’s dead before the end of the first episode. He’s the Janet-Leigh-in-Psycho figure and, by this metaphorical rationale, HIV is the omnipresent, murderous “mother” wreaking indiscriminate havoc.

It’s a Sin is, at heart, about parents and children, not just of the biological but the governmental sort. Margaret Thatcher and her administration’s prejudicial policies loom large here. She even appears, from behind, in a comedic vignette stemming from Roscoe’s affair with a closeted Tory politician, Arthur Garrison (Stephen Fry). The macro cruelty is paralleled with the micro callousness of blood relatives from whom several of the Pink Palace denizens and their acquaintances have escaped. HIV infection, unfortunately, acts as a kind of two-fold death sentence. Several times throughout the series, characters are said to have “gone home” and the words hit with a debilitating forcefulness, illustrative of the regression of body and spirit that results from both viral and familial maladies.

Davies is doing some diagnosing of his own here. A few lyrics from the Pet Shop Boys song that gives the series its title are key: “When I look back upon my life/It’s always with a sense of shame/I’ve always been the one to blame.” It’s a Sin is about working through that entwined sense of shame and blame, and reorienting a large portion of it from those who died to those who couldn’t be bothered. To this end, Ritchie’s mother, Valerie (Keeley Hawes), emerges as a dramatic fulcrum in the series. She’s a seemingly soft-spoken and gentle figure in the early going who proves, by It’s a Sin’s end, to have a heart of stone and a willfully large set of blinders. Valerie gets several showcase sequences in the final episode and Hawes manages to brilliantly walk the line between shrewish and sympathetic as her character deals with revelations about Richie that, as several others chide, she should have known from the first.

Davies has always gone big in his dramas about queer life, particularly in the monologues. Alexander and West, especially, are gifted climactic arias brimming with heart-rending poignance and righteous clarity. Still, there’s something about It’s a Sin that feels summative, as if this is the work that Davies has been building to since he broke out of his own creative closet over two decades ago. And we’re all the richer for his effort.