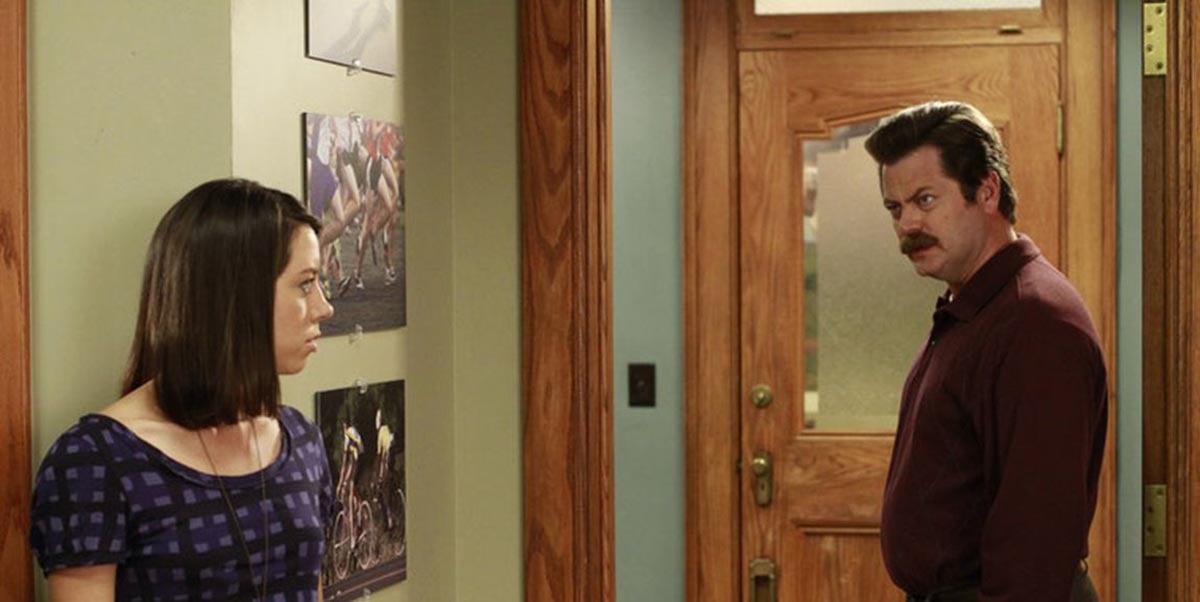 Fortunately, Parks and Recreation’s writing staff turned a dramatic corner when scripting the show’s largely wonderful second and third seasons; every single character became thoroughly fleshed out, increasingly empathetic, and less of a clichéd cardboard cutout. Most prominently, Amy Poehler’s Leslie Knope, the heart and soul of the series, transformed from a bumbling, female version of Steve Carell’s Michael Scott to one of the most likable lead characters currently on network television. Only rivaled in ensemble comedic dexterity by the likes of lead-in series Community and FX’s Archer (which, though animated, could feasibly work as a live-action show), Parks and Recreation reaches a new benchmark early on in season four, its dually episodic and season-spanning narrative-arc formula locked in so firmly and its characters so expertly defined that we easily feel as if we work right beside them, seeing them go about their simultaneously hilarious and heartfelt antics in the corridors and offices of Pawnee’s City Hall.

Season three concluded with Leslie in quite the quandary: Her blossoming relationship with the once slightly callous government official Ben Wyatt (Adam Scott) was put into jeopardy due to her intense longing to run for public office. Not to mention, Ben is technically Leslie’s boss. The lion’s share of the season premiere, “I’m Leslie Knope,” manages to tie things up in a way that’s not only slyly intelligent, but also winningly simplistic in that it avoids a convoluted storyline filled with misunderstandings and unnecessary slapstick jokes. In a scene that’s one of the show’s best to date, Leslie, who had been dodging Ben’s latest gift-giving efforts (her last breakup attempt was thwarted when he presented her with a giant L-shaped éclair), is surprised when Ben reveals that he’s discovered her bid for office when he presents her with a Knope election campaign button in a jewelry box.

The end of season three saw Aziz Ansari’s trend-whore Tom Haverford resigning his post at the Parks Department and establishing a sure-to-fail, devoid-of-distinctive-categorization company, Entertainment 7twenty. Initially it was unclear as to how the character’s absence from the Town Hall offices would affect the show; Tom’s perpetual can-do spirit, as well as his crass clone of a sidekick/business partner, Jean-Ralphio (Ben Schwartz), earn some of the show’s biggest laughs. But the Entertainment 7twenty subplot proves itself to be a comedic goldmine, with the company’s base of operations, a massive white-walled warehouse, becoming a character all its own, with an assortment of bizarre furnishings, zombie-like model/secretaries playing with iPads in isolated corners, and a party button that initiates spontaneous dancing from everyone on the premises. Ansari and Schwartz’s chemistry is what makes all of this ludicrousness work. It’s the genuineness of the show’s ongoing relationships that have made Parks and Recreation such an inviting piece of television.

Ushering in new, smartly written characters and sculpting them into real people is something Parks and Recreation has perfected in season four. The married life of April (Aubrey Plaza) and Andy (Chris Pratt) is a joy to behold since the two actors take full advantage of their opposites-attract scenario, sketching one of the most oddly charming TV couples in recent memory. Rob Lowe’s Chris Traeger, who continues to be an endless source of OCD-laced hysterics, is also a perpetual highlight. The episode “Ron and Tammys” formally introduces us to Ron Swanson’s (Nick Offerman) ex-wife, Tammy One (a gloriously icy Patricia Clarkson), and Ron’s mother, Tammy Zero (“Her name is Tamara…but she goes by Tammy,” sighs Ron). Clarkson downright chews the scenery, making the nymphomaniac loose cannon Tammy Two (Offerman’s real-life wife Megan Mullally) come off like a Stepford wife. With a cast as ostensibly close-knit and in-tune as these actors are, season four of Parks and Recreation illustrates just how far the series has come from its mediocre beginnings, and could very well take it to even greater, and funnier, places.

Review: Pan Am: Season One