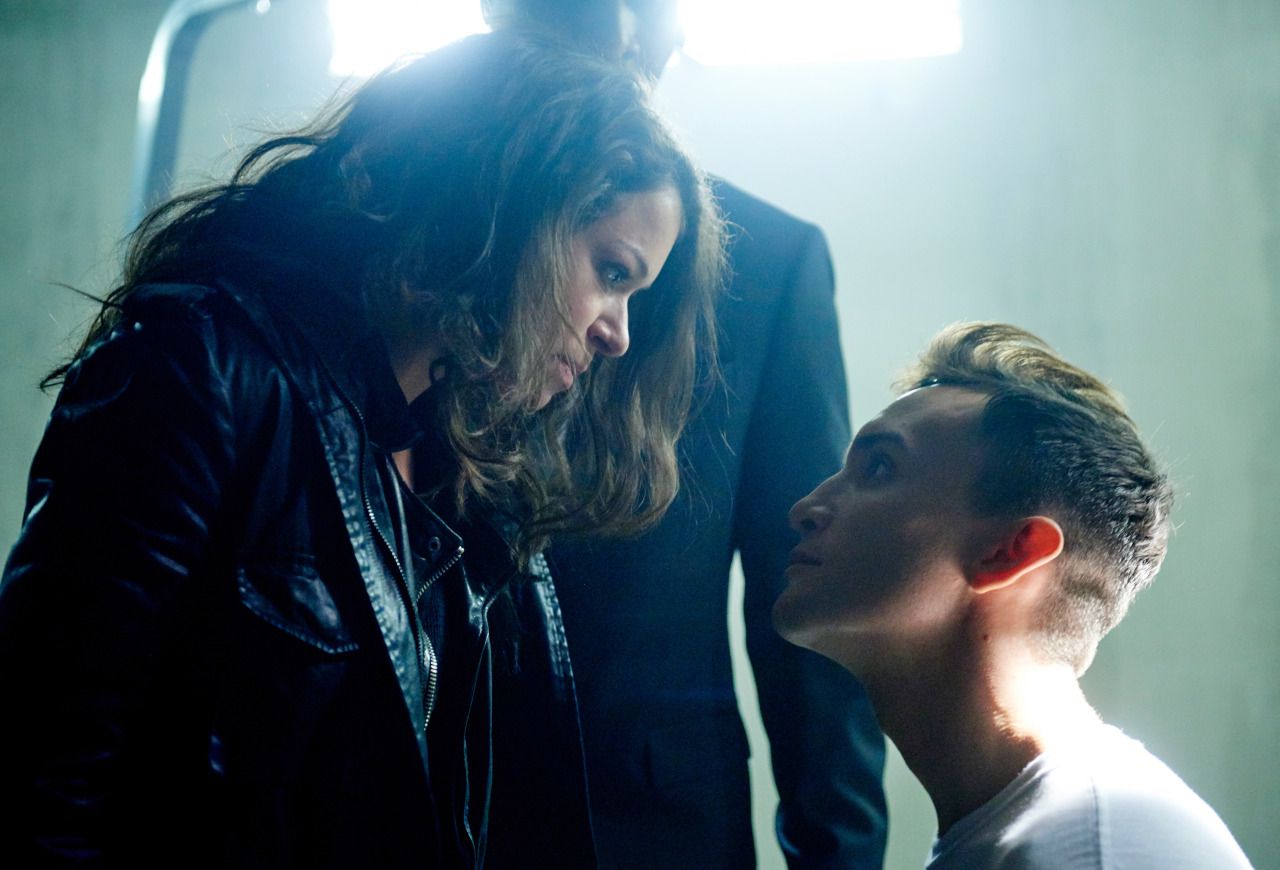 “You’re a legend, Sarah Manning.” So one of Project Castor’s menacing clones (Ari Millen), imprisoned by the Dyad Group, pays his respects to the former con artist (Tatiana Maslany) in the season premiere of Orphan Black, as the genetic “sestras” of the series confront yet another amorphous enemy. It’s the subtext of the scene, however, that suggests both the strengths and the weaknesses of tonight’s episode, for the Castor clone’s greeting might also be taken as an acknowledgment of Maslany’s incomparable talents. “The Weight of This Combination” once again offers evidence that hers is the best performance on television, but it remains unclear if Orphan Black can keep pace.

The episode’s finest sequence, for instance, emphasizes Maslany’s deft use of mannerism to distinguish one clone from another. In a fleet-footed montage, Felix (Jordan Gavaris) transforms Sarah into Dyad “über bitch” Rachel Duncan, but no power suit or crisp Cambridge accent can make Sarah comfortable in her adversary’s skin. From Sarah’s stiff approximation of Rachel’s posture to suburban housewife Alison Hendrix’s overcooked attempt at streetwise Cockney, Maslany ensures that we never lose sight of the character behind the disguise, even as she plays Sarah (posing as Rachel) slapping Alison (posing as Sarah) across the face. “Holy doodle, here we go,” Alison mutters under her breath as Sarah, Delphine (Evelyne Brochu), and the impossibly creepy Ferdinand (James Frain) approach the interrogation room, and as a measure of the extraordinary difficulty of Maslany’s task, “holy doodle” is right.

For her part, Alison remains the necessary leavening agent in Orphan Black’s otherwise cumbersome narrative, barking out orders to the “Soccer Starz” before piloting their short bus home from the game in a crossing guard’s vest. She conspires to unseat the incumbent school trustee in an upcoming election and tries to repair the family finances after her husband, Donnie (Kristian Bruun), leaves his job in a blaze of glory, but it’s still the throwaway details that mark Alison’s subplot as a canny suburban satire within Orphan Black’s bleak universe. Only a woman who once tortured her husband with a hot glue gun can say, “Shush your mouth!” and command silence.

With Helena dreaming of baby showers and talking to scorpions while locked in a large wooden box, and Mrs. S (Maria Doyle Kennedy) sidelined by a bruising fight with one of the Castor clones, it falls to Cosima to hold down the fort with Sarah’s daughter, Kira (Skyler Wexler). On the mend after a life-saving bone-marrow transplant from Kira last season, Cosima is clearly still shaken by the experience (her gut-wrenching breakup with Delphine won’t help), but remains committed to cracking the Project Leda cipher Ethan Duncan left in an old copy of The Island of Dr. Moreau.

At least Kira has a babysitter. Her mother is busy seducing Ferdinand with a firm stiletto to the crotch. Sent by Topside, the shadow corporation that controls Dyad, to conduct a security review, he’s clearly into Rachel’s brand of sexual domination, and with Rachel recovering from surgery to remove a pencil from her eye, Sarah uses the opportunity to press for a commitment to recover Helena. In the process, she learns of “Helsinki,” a plan to eliminate the Project Leda clones in short order, and nearly asphyxiates Ferdinand with his own belt, though it’s hard to know whether any of these details deserve much attention. Castor, Leda, Topside, Dyad, Helsinki: “The Weight of This Combination” has more proper nouns than an encyclopedia, more plot than a trilogy of YA novels, but save for the return of the “sestras” themselves, the episode conveys less vital information than either.

Which returns us to the subtext of the imprisoned Castor clone’s exchange with the legendary Sarah Manning. Millen fails to suggest even the faintest distinction among his wide-eyed, snarling characters, reducing Project Castor to little more than an abstraction. This makes some narrative sense, of course, for the clones function as human weapons in a futuristic military-industrial complex, and, symbolically at least, the prospect of Helena and Sarah fighting to protect their reproductive independence against an all-male apparatus of state power holds promise. But Orphan Black, as Maslany reminds us each week, succeeds on the strength of the individual experience, the intersection of nature and nurture that formed Sarah, Helena, Alison, Cosima, and Rachel—true originals all. In this sense, President Dwight D. Eisenhower’s 1961 “Farewell Address,” from which the episode takes its title, might indicate a narrative caution as well as a political one. “We must never let the weight of this combination endanger our liberties,” Eisenhower warned, and though he referred to the Cold War collusion between the armed forces and their private suppliers, the same principle applies here. The risk of combining the “sestras” and the Castor clones is that Orphan Black’s interest in metaphor will weigh down its star performer’s commitment to the specific detail, for the series is at its best when Maslany flies free.

Game of Thrones Recap: Season 5, Episode 2, “The House of Black and White”

The Americans Recap: Season 3, Episode 12, “I Am Abassin Zadran”