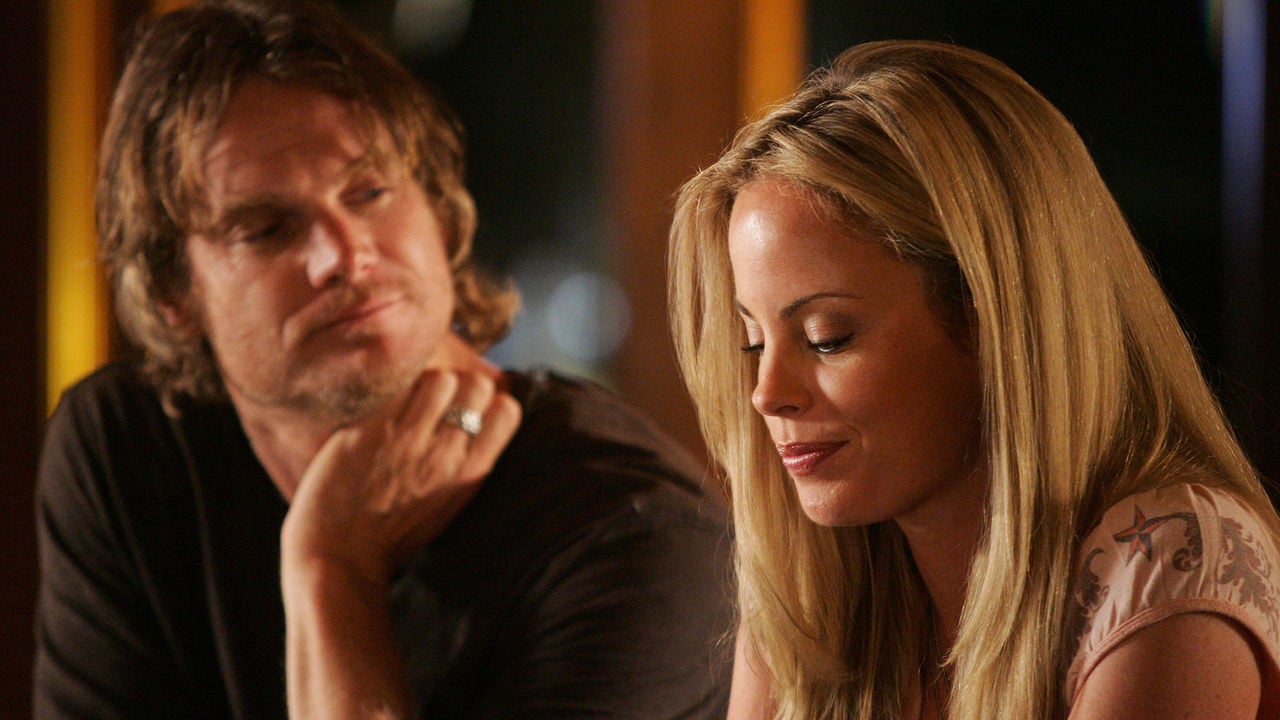 That was most certainly the voice of the Creator taunting the fragile Barry Cunningham in the dilapidated barroom of the Snug Harbor Motel. Figures that Barry’s momentary epiphany about his surroundings (which he parallels to a catbird seat anecdote about Daniel Frohman’s Lyceum Theatre) would be so suddenly quashed by a sentiment from the void. Milch gives voice to the fears that hinder us all—there’s a touch of the misanthrope in how his characters come off as puppets constantly in service to an unfathomable Divinity, but he likewise recognizes that, every now and again, we are capable of breaking through the programming, becoming, even if only for a moment, our tried and true selves.

Based on episodes seven and eight of John from Cincinnati (entitled, respectively, “His Visit: Day Six” and “His Visit: Day Seven”), I’d posit that the characters who most often transcend their hardwired natures are Shaun Yost (Greyson Fletcher) and Palaka (Paul Ben Victor), the former by celestial (and hormonal) default, the latter by naïve virtue. More and more apparent that Shaun is some kind of divine instrument, born of a porn star Magdalene (Chandra West’s Tina Blake) and set for some purportedly greater purpose outside the border town boundaries of Imperial Beach. “Shaun will soon be gone,” is the echoing refrain, courtesy John Monad (Austin Nichols), through these two episodes, though it’s impossible to get a clear read on his declaration: is it a warning or merely an irreversible statement of fact?

When John’s proclamation becomes a matter of public record, via a video message sent to Butchie Yost’s (Brian Van Holt) “hairlip” webmaster Dwayne (Matt Maher), numerous characters scramble to-and-fro, attempting to head off this perceived threat at the proverbial pass. The results aren’t pretty: tensions rise, accusations fly, misunderstandings abound—imagine a Pirandello play populated almost entirely by freshly beheaded chickens. John even stages a miracle for the benefit of shell-shocked former policeman Bill Jacks (Ed O’Neill), as well as an off-screen one for Hawaii-based drug dealer Steady Freddy Lopez (Dayton Callie), that only confuses this Neanderthal odd couple more. In the absence of answers and awareness, which can never be forced, they accept their role as protective muscle. “Whatever the fuck he [John] is, he’s got to come through both of us,” says Freddy.

For Shaun, the stir of activity surrounding him takes something of a toll, though, ever the adolescent, his emotions are raw and amorphous. “I wish Zippy hadn’t kissed me,” he says of Bill’s curative avian companion before breaking into tears. Bill comforts him, casting a scowl up towards the spiral staircase that serves as a constant reminder of his deceased wife Lois. In this moment, Bill’s refrain from the series pilot comes to mind: “When you’re older you’ll understand.” This is exactly the situation he wanted to prevent—to his eyes, Shaun is not ready to experience adulthood’s twin pains of responsibility and regret. But the elder characters on John from Cincinnati tend to be prisoners of their own perspectives, and so when Shaun later lays a confidently benedictive hand on his father Butchie, Milch and his editors insert a cutaway to Bill, shaken, nervous, and uncertain. Age does not necessarily beget wisdom.

But it does increase one’s sense of foreboding. By the end of episode eight, the momentary threat of Shaun’s disappearance has dissipated, yet members of both his immediate and surrogate family gather round him like hawks, waiting for an outcome they must subconsciously recognize to be inevitable. One particularly intriguing scene sees Cissy Yost (Rebecca De Mornay), Shaun’s live-wire grandmother, sign his sponsorship over to Stinkweed surfwear CEO Linc Stark (Luke Perry), a Faustian culmination of two episodes’ worth of corporate machinations that have seen Linc ousted from his own company, and Dr. Michael Smith (Garret Dillahunt) prepped for some sacrificial lamb treatment at the hands of his former employers. “Lawyers together. Can’t be good,” says Ramon Gaviota (Luis Guzmán) of the meeting between hospital liability attorney Mark Lewinsky (Stephen Tobolowsky) and ambulance chaser Meyer Dickstein (Willie Garson), their business tellingly transacted in the Snug Harbor Motel’s much-feared Room 24. There’s room within both these storylines for caricatures (between this and Deadwood, Tobolowsky is now the go-to performer for obsequious notaries) and shades of grey (one step outside their devilish professions, and both Dickstein and Stark reveal all-too-human concerns).

Milch rightly questions corporate structures, but he never loses sight of the people inhabiting them, and this essential humanism extends to all his characters, even to a fumbling second banana like Palaka. The trials and tribulations of Steady Freddy’s (broken) right-hand man take precedence in John from Cincinnati’s seventh episode, as he becomes the unwitting victim of a tattooing gone wrong. It threatens to be a tangential comic aside stretched to the breaking point, but Milch is after something more. In Shakespearean terms, Palaka is the clown, the character everyone else either abuses or ignores. Yet this seemingly lower-class station has its advantages, as humor is perhaps the greatest guise with which to force introspection and revelation, if not always of the individual self, then of the numerous currents in the community at large.

The clown rarely accomplishes this consciously. Palaka’s poisoning puts him in a regressive trance state where he mumbles about his mother and confesses, in childlike terms, his love and admiration for Freddy (his tattoo was meant to emulate one of Freddy’s own). Freddy is clearly touched by the sentiment, even though he can barely muster any words of appreciation. And after Palaka makes a full recovery, courtesy Dr. Smith (who takes his patient’s slow ice-bath recovery as an opportunity for pensive monologue), he once again becomes Freddy’s punching bag. Palaka’s importance to the Imperial Beach rogues gallery will never be explicitly stated—he’s background through and through, and he knows it. But the benefit of occupying that space in a Milch narrative is that it you will very likely, and more often than you realize, come to the fore. The image of Palaka at the end of episode eight is one such profound aside. “You keep watch on that boy, boss, and I’ll keep watch on you,” he says from his hidden vantage point as Freddy and Bill camp expectantly outside the Yost residence. Through all these layers of perspective, it’s clear that no one knows what it is, exactly, they’re supposed to be waiting for, though a seemingly harmless, yet all too hypnotic game of juggling (reminiscent of an anticipation-laden Sopranos climax) serves as ample evidence that a reckoning is upon us.

For more recaps of John from Cincinnati, click here.