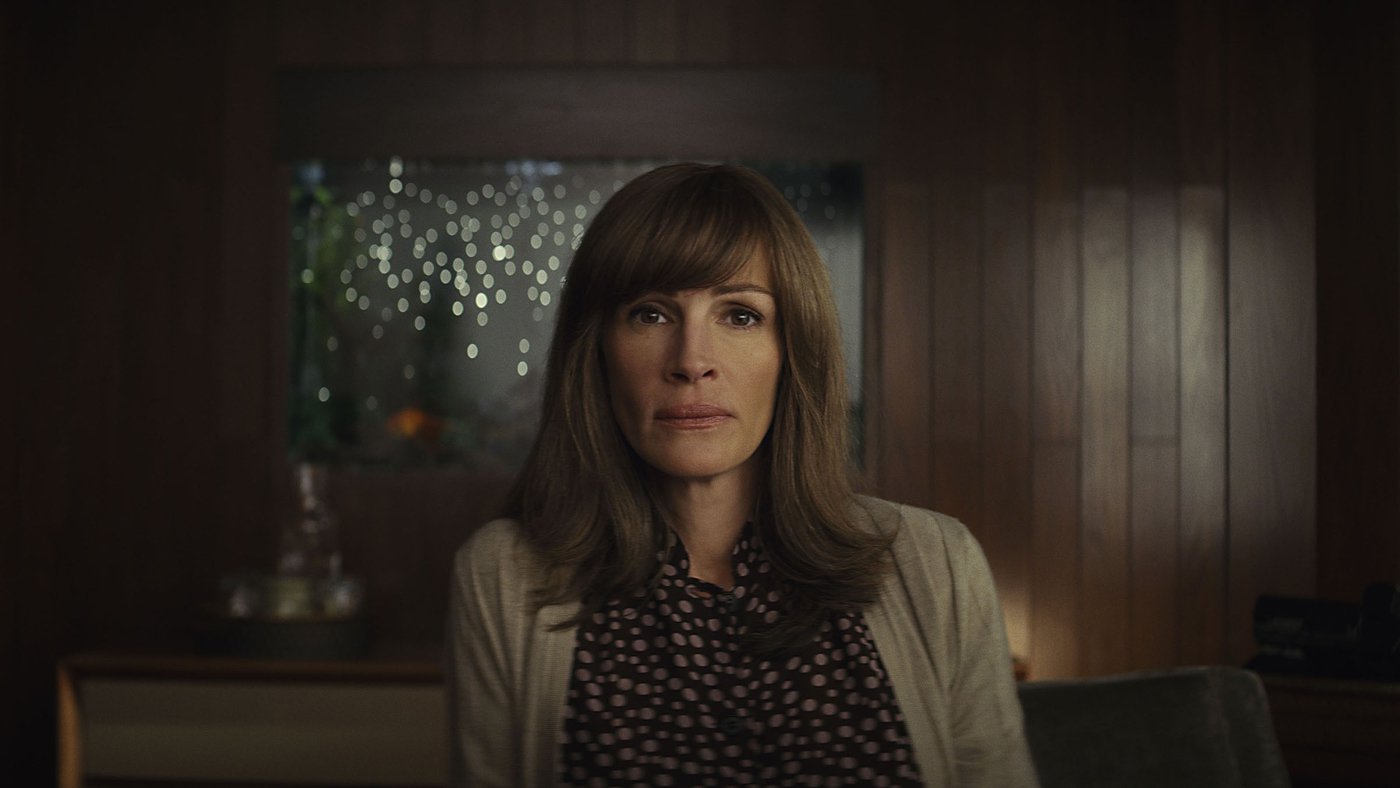 Paranoia is the motor the drives Homecoming, which should come as no surprise since the Amazon series was created and directed by Sam Esmail, the mastermind behind Mr. Robot, another drama concerned with issues of surveillance, memory, and perception. Esmail wastes no time hinting at the darkly cynical corporate motivations behind the wholesome façade of Homecoming—a therapeutic treatment facility designed to help returning American veterans acclimate to civilian life—and builds an intriguing and stylish mystery around what, exactly, those motivations entail.

Heidi Bergman (Julia Roberts) is an under-experienced social worker who oversees the Homecoming program without wholly understanding its true purpose. Esmail embeds the viewer alongside Heidi during her time at Homecoming, and as the series wears on, her work causes her to become progressively more suspicious and emotionally and mentally unstable. While Heidi’s domineering and shady boss, Colin (an amusingly smarmy Bobby Cannavale), provides the first narrative hint that Homecoming is interested in offering more than therapeutic healing, Esmail’s flourishes as a director immediately imbue the facility with a sense of lurking malice.

Jarring shifts in aspect ratio and color palette are employed to distinguish between two distinct timelines: 2022, when Heidi is waitressing in a Florida greasy spoon, and the present day, when she’s working at Homecoming. The action in 2018 is vibrant and colorful, framed in widescreen, and buoyed by a breezily frenetic score. When the series shifts to the future, the screen shrinks to a boxy 4:3 ratio. Lifelike colors are replaced by dull, drab earth tones, and the music becomes dour, pulsating, and intrusive, highlighting Heidi’s emotional numbness and compounding the show’s mystery: Heidi, for initially unclear reasons, has forgotten her time at Homecoming altogether.

Bold stylistic choices such as temporal jumps and a thundering score are effective but manipulative, suggesting menace even when the action in Homecoming is innocuous. Esmail’s less eye-catching choices are more insidious, and create an absorbing sense of intrigue without begging for attention. Heidi and the soldiers staying at Homecoming are often framed in severe overhead shots, evincing the voyeuristic allure of a Hitchcock film—an impression complemented by a musical score that occasionally recalls Bernard Hermann’s music for the master of suspense.

In conversations throughout Homecoming, Heidi is frequently framed low in the corner of the screen, literally overwhelmed by her surroundings. But when Heidi speaks specifically to Colin over the phone, the series switches to split screen, allowing Heidi to be visually cornered by her condescending boss. Some shots feel like expendable stunts, like one that directly follows a car as it circles a parking lot, but for the most part Esmail is a thoughtful stylist, combining form and function to highlight Heidi’s disorientation.

The show’s performances are also calibrated to communicate suspicion and skepticism. Roberts plays Heidi in a low register, stammering through conversations with Colin and displaying quiet awe as she interviews clients, ultimately zeroing in on Heidi’s vulnerability as the character becomes more suspicious. As Department of Defense office drone Thomas Corrasco, who investigates Heidi’s role at Homecoming, Shea Whigham latches onto the sad-sack nature of his character’s job, mumbling during his interviews and avoiding eye contact during confrontations. The character, like Heidi, is a fish out of water throughout most of the series, motivated by what initially seems like mere paranoia to pursue a truth that Esmail hints will be disturbing.

Homecoming’s visual ambition is complemented by intellectual curiosity, with Esmail and his writers using the show’s titular facility to impugn the motivations of the military industrial complex and its profiteering contractors, highlighting the tenuous relationship between memory and reality, and demonstrating the dehumanizing nature of combat. As Heidi and Thomas circle the dark truth of what happened at Homecoming, the series explores the emotional fallout of the soldiers’ most tragic experiences, and underlines the way the men’s emotions inform their very realities. In the tight span of 10 easily digestibly half-hour episodes, Homecoming manages to both thrill and propose a grim hypothetical: that the earnest practice of soldier rehabilitation and the economic rigors of the war business may not be able to coexist.

Review: The Kominsky Method: Season One