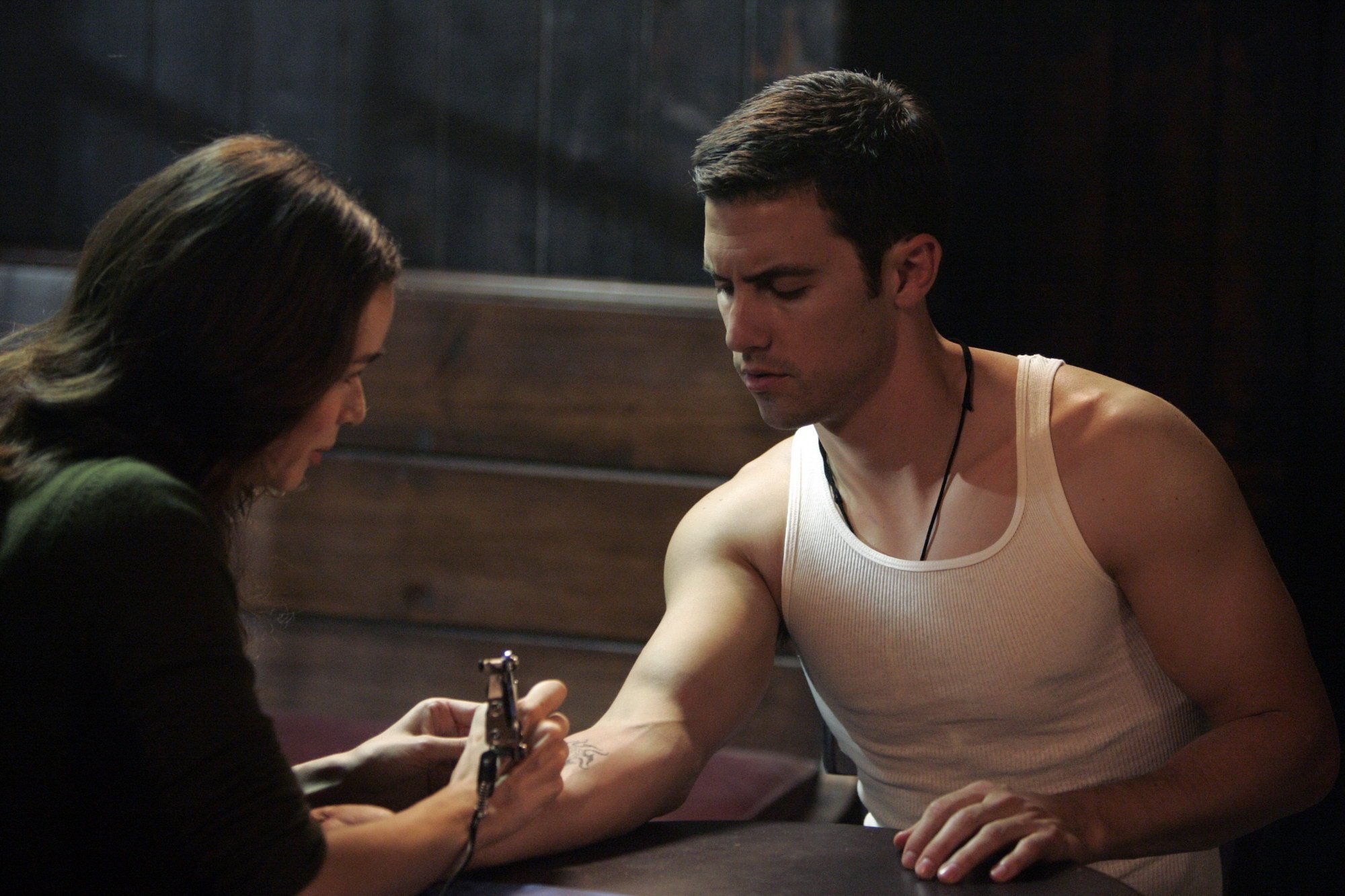 In “Kindred,” the third episode of Heroes’s second season, some of the characters revealed their powers to others and encountered acceptance, even intimacy. This in itself wouldn’t be a bad thing—the struggle superheroes have reconciling their loneliness is one of the genre’s common themes. It’s just a shame the writers are exploring it by keeping their characters trapped in sub-par, meandering story arcs that do little to advance the grander mysteries of the show.

After the first two equally slow-moving, but somewhat more intriguing episodes of this season, “Kindred” (written by J.J. Philbin and directed by Paul Edwards) seemed to finalize that this is indeed the tone that the writers are going for. The fast-paced, head-spinning ridiculousness of last year is gone for now: instead we’re stuck with a self-contained adventure soap material moving at a snail’s pace.

Unless things suddenly get interesting, this is a real shame, because (apart from a couple duds) Heroes actually has a fairly talented cast. By not allowing them to interact, the show is killing its chances of becoming a fun ensemble piece. One of the real strengths of Lost (a show I can’t stop comparing Heroes with) is the way it uses its ensemble, creating clear and varied dynamics between its many characters, and having fun when it throws together an unlikely pair. Way back when, I figured Heroes would eventually unite everyone into some sort of gritty, realistic Justice League by its second season, and start having fun with the power struggles and partnerships that would develop. Now, I guess I should have considered that the show doesn’t have the budget for such a concept, a concept that probably would have been difficult to keep non-cheesy anyway. Still, it’s unfortunate that the extent of main character crossovers we’re getting at the moment is some stolen phone calls between Noah (Jack Coleman)and Mohinder (Sendhil Ramamurthy).

The plot by Noah, Mohinder and Matt (Greg Grunberg) to fell the mysterious hero-hunting ‘Company’ is the only story thread of any long-term significance the audience has been granted so far. Last week, Noah outlined a treasure hunt for the stolen paintings of murdered precognitive Isaac Mendez, a quest that sounded like it might dominate the next few episodes. True enough, we were granted a glimpse of one of the missing eight paintings at the end of this week’s episode, and its image was as foreboding as possible, showing the bespectacled Noah sporting a Moe Green Special while his daughter Claire (Hayden Panettiere) lurked in the background with a figure that seemed like new boyfriend Wes (Nicolas D’Agosto). Heroes has used Isaac’s paintings to tease the audience before, but their accuracy remains unclear—some predictions have come true, but most have been averted, so Noah’s probably safe for now. It was the best cliffhanger the season’s had so far, but that’s not high praise, and all it added was more vague menace, rather than actual plot development.

Claire had a little more going on this week, but sadly her entire plot this week was focused on her new love interest Wes. Considering Panettiere’s teen idol status, giving Claire a boyfriend is an inevitable move, but it’s too bad this guy is such a dud. His power is flight, one we’ve already seen from Nathan (who’s been basically absent apart from his intriguing mirror-vision in the premiere), and one that he exploited to score with her in a total cheeseball move only Superman could ever pull off. There’s still something rather sinister about Wes, and I’m sure he’ll end up betraying Claire in some way eventually, but I also get the feeling he’ll be sticking around in a lame romantic capacity for at least a few more episodes. This plot did explore one interesting idea, though: Wes revealed he’d been abducted and tagged by the Company, as Matt was in the first season, and that he still remembers the visage of the man with horn-rimmed glasses who kidnapped him. As well as being a fun shoutout to Noah’s old fan nickname, it raised the never-quite-settled issue of his old job as ambiguous and Company bagman. Coleman’s performance was so good that the writers transformed a two-dimensional pseudo-villain into the caring, but badass heart of the show. The transformation was pretty quick, however, so exposing the specters of his past isn’t a bad idea.

The rest of “Kindred” consisted only of mediocre bubble plots, with no sign of real advancement coming anytime soon. Worst of all is amnesiac Peter (Milo Ventimiglia) and his adventures with some Irish hoodlums. The writing of these characters is at best lazy, bordering on offensive, with the anachronisms and stereotypes piling up by the minute: the tattooed, flat-capped, Guinness-swigging gang enlists Peter to help them rob a Celtic soccer game (despite Celtic being a Glasgow team), fighting off gun-wielding police (even though the Irish police don’t carry firearms) before returning to the pub where they apparently live. I’m usually not one to nitpick at these inaccuracies, but the sheer lack of effort that’s gone into the characterization of these guys is so shocking I had to pipe up. An even more upsetting development had Peter joining their gang and deciding not to open the box containing all his personal information—a weak ploy by the writers that seems geared only towards dragging out this amnesia as long as possible. Teasing the viewers by having Peter’s new tattoo morph into the helix symbol he wears around his neck was no good either—the supposed mystery around this symbol is vagueness for vagueness’ sake.

Much like Peter, Hiro (Masi Oka) also had the chance to escape his bubble plot (he’s hanging out in ancient Japan), but also decided to stick around, seemingly out of obligation to warrior Kensei (David Anders) and the lady they both have eyes for. These medieval antics are not quite so tiresome, as they’re colorful, funny and better-paced, but keeping Hiro stuck in the past for this long likewise reeks of stall tactics. I don’t buy the chemistry between Hiro and Princess Iako (Eriko Tamura), which is too chaste even for him, and while Anders has been an amusing presence so far, now that he has discovered a regeneration ability (another recycled power—-surely the writers are not already out of cool talents?) and embraced, to some extent, his heroism, does Hiro really need to remain his companion? The only real evidence was Kensei voicing the idea that Hiro is like his conscience, a sort of Jiminy Cricket that appears out of nowhere to advise the drunken English samurai. Hiro is indeed a conscience for the show at large, representing the ‘with great power comes great responsibility’ angle of superheroism that anguishes over even the most minor abuses of power. The uneasy balance between Hiro and Kensei merits further investigation of this theme by the writers, so let’s hope Hiro’s time in Japan is spent wisely.

The only other notable point of “Kindred” was that it finally showed us the fates of season-one villain Sylar (Zachary Quinto) and schizophrenic stripper Niki (Ali Larter), who had been missing the last two weeks. Niki, a skinny blonde take on the Hulk, has never been a favorite of mine, as Larter’s talents are not subtle enough to really milk her Jekyll/Hyde personality to the fullest. All Niki and her son Micah (Noah Grey-Cabey) did was stand by the grave of departed former cast member D.L. (Leonard Roberts), although their dialogue suggested he might not be as dead as we think, before Niki dropped Micah off at Lt. Uhura’s house in New Orleans. Yep, Nichelle Nichols became the second Star Trek alum to be stunt cast in Heroes, although I don’t think she holds the same geek cache George Takei did.

Sylar, who was skewered by Hiro in the season-one finale, seemingly miraculously survived with the help of illusion-caster Candice, a quite alluring character played well by Missy Peregrym last season and poorly by someone else here. As the central villain of last year, Sylar was a demented power-thief who gained abilities by the rather Grand Guignol move of eating people’s brains. Much like Peter, the writers have decided to reboot his character, wiping his abilities and having him start from scratch. While I realize Sylar is a popular character, I myself never felt Quinto could sell his mania convincingly, and Sylar ended up too often subdued, when he should have been all crazy, all the time. I had feared adding Quinto to the cast this season meant the writers were going to try and rehabilitate Sylar’s character, but so far it seems he’s still quite bonkers, immediately killing the woman who’s been keeping him alive for months while writhing around and screaming. Still, Sylar’s a tricky proposition for this second season: it’s tough to have him be anything but a villain, but the writers seem rightfully keen to keep things fresh this year, so how Sylar will progress remains quite a mystery.

Overall, “Kindred” struck a worryingly dull note, slowing plot development to a crawl and keeping the overall fun quotient pretty low. While Heroes’ second season doesn’t seem like a catastrophe yet, it might end up even worse: a mediocre, formulaic disappointment. A former success turned trainwreck can be fascinating to watch, but so far there’s been little amusing—intentional or no -about these episodes. One still gets the feeling the writers have a few aces up their sleeves—it’s too bad they’ll stay hidden for quite a while yet.

Color Adjustment: The Return of The Boondocks