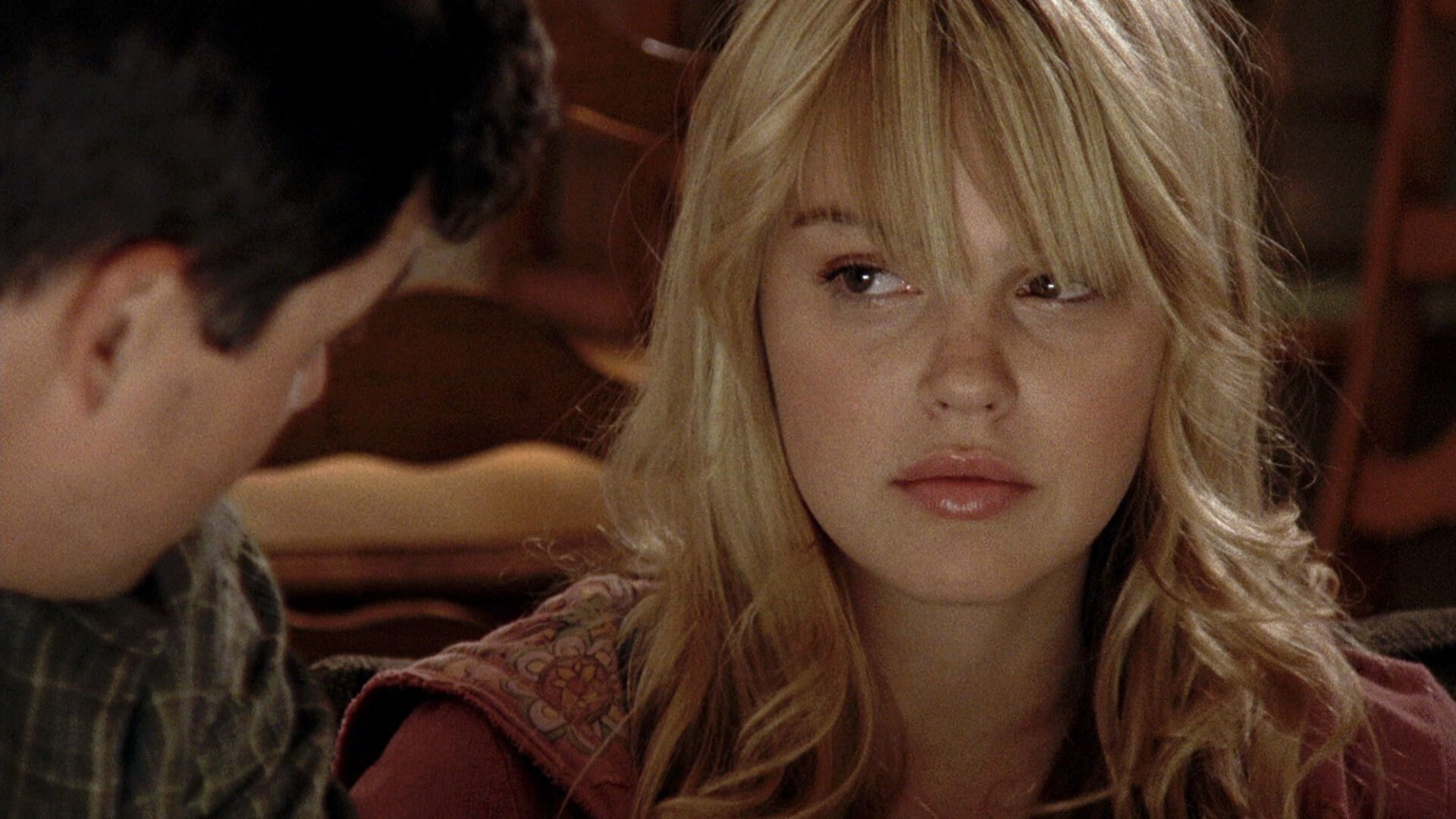 Perhaps in part because “Jumping the Gun” is one of the few episodes this season that I’ve had the opportunity to see twice before writing about it (meaning I had more time for things to pop out at me), this weeks’s installment of Friday Night Lights seemed particularly meaty. Although lots of characters turn up incidentally, the script keeps a tight focus on three of the series’s central figures—Coach Taylor, Smash Williams and Tim Riggins—and the exclusion of Matt, Landry, Jason, Tyra, etc., allows for a soewhat deeper exploration of the issues du jour.

The transition from the February letter-of-intent for senoirs being recruited for college ball to the verbal-commitment paradigm is a good thing for FNL-because the season covers the period between August/September and December, we otherwise would have no clue where Smash would wind up before the series came back without him for season three (assuming, of course, that a third season is in the cards). Smash’s vetting of the schools, and his ultimate decision, answer a lingering question about his new girlfriend Noelle: I’d been wondering if perhaps she was a sleeper agent for Miami Southern, the school at which her brother plays, who was trying to steer Smash there. Instead, her intense grilling of the recruiters (and her clear joy at Smash’s decision to play at TMU) suggests she could be more like Lyla in the days before Jason’s injury—not quite a gold digger, but nonetheless eager to follow her man on his road to glory. If not smarter than Lyla, though, she certainly has more perspective—she seems like the kind of gal who’d major in business or pre-law and would be sure to have a contingency plan for her future. As a former cheerleader with a good head on her shoulders, she’d certainly do damn well for herself as a pharmaceutical sales rep.

I’d been inclined to think that Mama Smash’s disdain for Noelle had to do with a general lack of enthusiasm for her son dating a white woman—she was none too thrilled when he briefly hooked up with Tyra last season—but “Jumping the Gun” left me convinced that the real reason was Noelle’s laserlike focus on the pro career she thought Smash was pursuing with a little too much vigor. Now that the hatchet has been buried all around and Smash is TMU-bound, I expect to see Mama Smash and Noelle get along with each other much better in future episodes. I’ve always been impressed by Liz Mikel as Mama Smash, and this week’s episode gave her particularly strong material. I look forward to seeing a lot more of her as we learn more about just why Smash’s commitment to TMU constitutes having jumped the gun.

The title, naturally, also applies to Coach’s confrontation with Shelly, which came a little too early for Tami’s liking. I can’t see too many viewers taking Tami’s side here: Between the “borrowed” blouse, the broken eggs and the hair dryer—and that’s just this week—no-one can blame a guy (especially a guy like Coach) for gently steering her toward the door. (When Coach pops in the game tape and finds an episode of The Office on it, I have to wonder if it was chosen because, like FNL, it’s owned and produced by NBC Universal or if one of the FNL producers sees The Office as embodying the kind of TV that Coach wouldn’t like or “get”—last season, it’s the show Julie and Matt were watching when he was nonplussed about Matt coming over). And while I understand that it’s hard for the writers to come up with enough Tyra-at-work scenes to fulfill the minimum number of Applebee’s plugs agreed to in the product placement deal, come on, Tami—if your sister is volunteering to pick up the tab, go ahead and milk her for a meal at a better restaurant! Tami may not be fond of extracting payback so directly; still, I was impressed buy the attention to detail shown by having her pointedly wearing the “too sexy” shirt when she has lunch with Shelly at the end of the episode.

With the game out of the way and their coach headed for the unemployment line, it’s a safe bet that we’ve seen the last of the Laribee Lions story arc. Both my viewings of the episode were via a rough cut disc provided by NBC with a fair amount of temp audio, and the game sequence provided an interesting look at how the plot of an episode can change on its way to the air. In the version I saw, the announcer—his lines clearly being read by someone who was hanging around the studio rather than the actor whose voice was ultimately used—delivers exactly the same description of the situation going into the final play that we hear in the broadcast version of the episode. However, the scoreboard shows Dillon leading 45-43, as opposed to being down by 5 as per the announcer. I’d expected that in the final version, the narration would change to reflect that Dillon was trying to hold on to a slim lead rather than aiming for a late comeback, but that wasn’t so: Instead, every shot of the 45-43 scoreboard was replaced by one of a 38-43 scoreboard—something that would have been a lot harder for the producers to fix than the narration, especially in the shot that shows Matt running in front of the scoreboard. I thought that even though Riggins was clearly about to score a TD that would have put Dillon over the top either way when the Laribee coach runs onto the field, the score might have been changed to 45-43 because the writers didn’t like the idea of Dillon winning a game only because of interference by the opposing coach.

Finally, we come to the Riggins story. It seemed pretty cruel of Coach Taylor to kick Rig to the curb when he found him sleeping in the locker room, and that was just the first of many bitter pills Tim had to swallow this week, others including his encounter with the MILF next door, his discovery that Billy is in worse financial straits than realized and, of course, the abortive TD. I suspect that nothing hurt Tim more, however, than having Coach Taylor praise him for being honorable just seconds after he and Billy have returned from stealing $3K from the meth dealer while picking up Tim’s stuff. I’m glad the confusion over the situation with Julie has been laid to rest (by swooping in to ‘fess up just as Coach and Tami are kissing and making up over the Shelly situation, Julie incidentally shows an impressive gift for being able to discern the perfect moment to deliver bad news to her father while suffering minimal consequences), but I have mixed feelings about the heist. On the one hand, Tim really should know better by now; on the other, the story line obviously stands to reinforce the surrogate fatherhood vibe between Coach and Riggins that I’ve been enjoying more with each passing week. Two concluding observations on the Riggins situation: 1) Why isn’t he being recruited even a quarter as aggressively as Smash? Sure, he’s missed games and has a checkered rep, but his grades and test scores can’t be any worse than Smash’s, and we’ve seen him score so many TDs that there would have to be some school—a third-tier party school, at least—that would offer him a scholarship. 2) Hey, Tim and Billy? If you steal $3000, use $2K to pay the mortgage and are at a loss for something to do with the remaining $1,000, here’s a thought: Save it for next month’s payment!