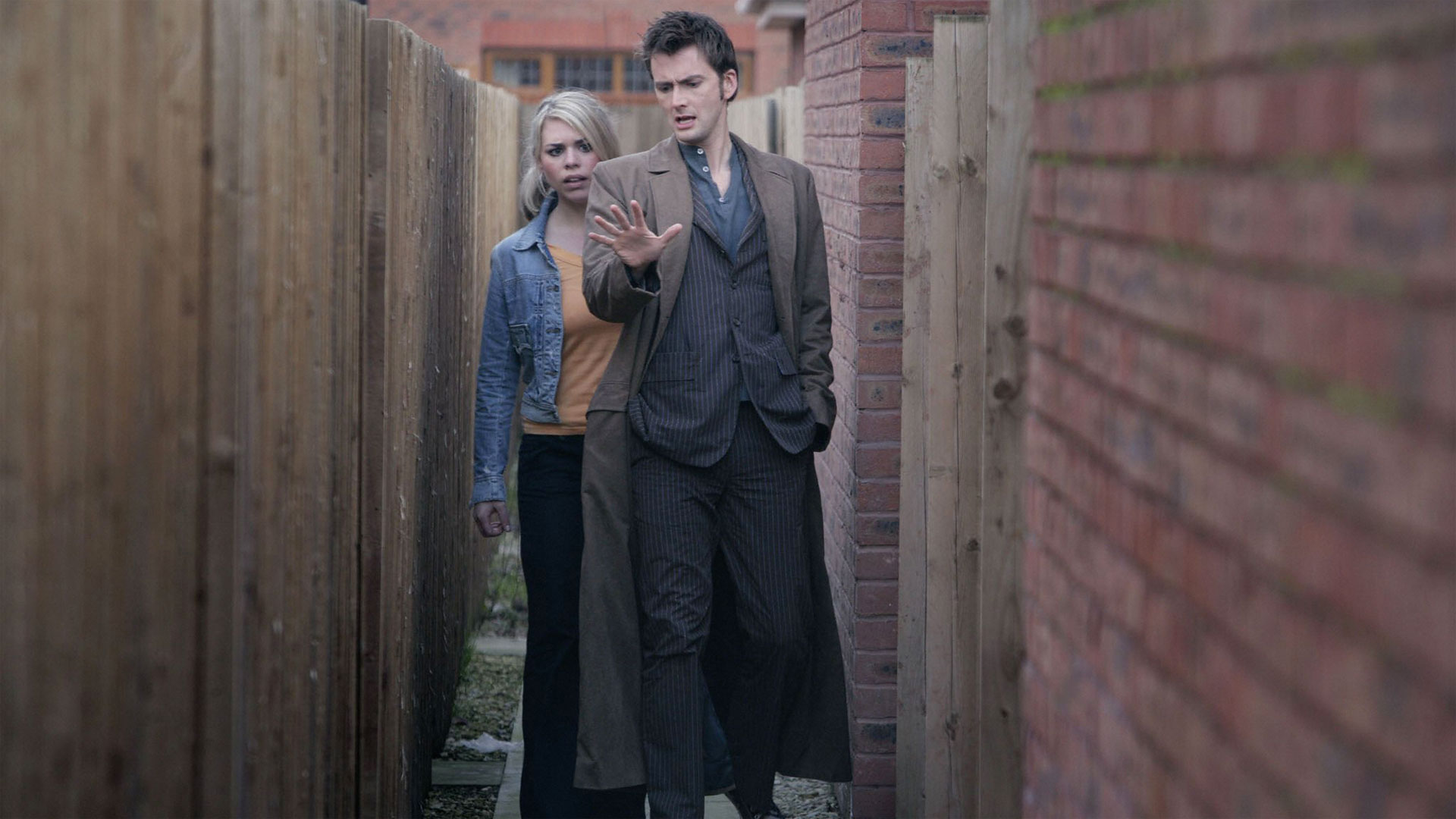 A suburban neighborhood. A different time. A major televised event. Missing residents. An abusive father. Alien abduction. “The Idiot’s Lantern”? Nope. But Doctor Who’s latest, “Fear Her”,has so many elements in common with that episode, it’s impossible not to draw a comparison.

Now I bagged on “The Idiot’s Lantern” something hardcore, and “Fear Her”has probably just as many flaws…yet there’s something about its itch that I don’t quite know how to scratch. While it’s hardly a season high point, its charms have slowly grown on me over time and multiple viewings.

Maybe it’s got something to do with Chloe Webber’s (Abisola Agbaje) pencil drawings. There’s an innocence to her madness that works a bizarre kind of Who magic. I recall doing these sorts of drawings when I was Chloe’s age (though I was a terrible artist), and watching her obsess takes me back to that time when sitting down with colors and paper was the most freeing, special feeling in the world. A kid can get lost in that world, and the idea that children here literally get lost in Chloe’s drawings lends to its sinister draw (ahem…). If there’s a reason “Fear Her” disappointed me the first time around, it’s because as the story moved forward, I was full well expecting a massive shift into the world inside the drawings. What reality did the children (and later the Doctor) experience when they were taken out of time and space and placed inside Chloe’s artwork? Perhaps it was expecting too much from Doctor Who’s limited budget for the episode to actually turn into a full-scale animated child’s drawing at some point (something akin to what Farscapedid with its Chuck Jones tribute in”Revenging Angel”).

Abisola Agbaje seems too inexperienced to portray this child possessed by the otherworldly Isolis. She’s no Linda Blair, and her “whisper” seems the calculated flip-side to Blair’s infamous growling (or perhaps just to Toby’s possession a couple episodes back). Much of the tension derived from the scenario relies on Nina Sosanya’s reactions. Sosanya’s a great actress (see the BBC’s recent spin on Much Ado About Nothing, also with Billie Piper or Russell T Davies’ Casanova, also with David Tennant), but seems a tad off here and I’m not even sure she totally believes in Agbaje’s performance. Since we never get to see the mother/daughter relationship prior to Chloe’s possession, we don’t have a reference point of their love for each other—at least not until the very end when the love blossoms against the threat of the sudden reappearance of the abusive father (an element that already felt tacked on and underserved). Since this occurs after the Isolis threat has been disposed of, it all seems very secondary. And the shots of Isolis leaping into and out of Chloe’s mouth are some of the goofiest ass images I’ve seen on Doctor Who in a good long while (they make Noel Clarke’s attack by the dustbin in “Rose”seem pretty cool in comparison). Yet despite all the criticisms, I still don’t dislike the episode.

Perhaps my affection for “Fear Her” has something to do with the suburban setting. I said The Wire (the villain of “The Idiot’s Lantern”) reminded me of “something from the Sylvester McCoy era”,which wasn’t a compliment. McCoy’s era introduced themes and methods of storytelling that Russell Davies has since perfected—but it never went far enough, and fell short in too many other areas. All that said, there are a few enjoyable tales from that time, and one of them is the final story of the classic series, “Survival”,which takes place in a suburban area that’s very reminiscent of the setting here. I’ve got some fond memories of “Survival”. One is seeing it for the first time on a crappy PAL to NTSC converted VHS tape with a roomful of other fans at a Who convention in Dallas. (At the time, none of us knew the show would get the axe in the coming months.) If “The Idiot’s Lantern” feels like bad McCoy, maybe “Fear Her” feels like good McCoy (which is still a few steps down from even bad Tom Baker).

The script, written by Matthew Graham (Life on Mars), was something of a last minute addition to the season lineup, after an idea by Stephen Frywas deemed too expensive to produce (Fry’s story was pushed to Season Three, but I believe has now, unfortunately, been scrapped altogether). I wonder how much time Graham had to get it together or if its parallels to “Lantern” were intentional? There are so many, it’s difficult to imagine it was a total accident. Graham’s greatest achievement here is his grasp on the Doctor and Rose and their relationship to each other. I’d be interested in seeing him attempt something bigger for the series further down the road; given his Life on Mars pedigree, he’s certainly got unique ideas about time travel.

Mostly though I’ve learned to enjoy “Fear Her” because it’s the last story before the two-part season finale where the shit hits the fan(s). It’s the last story where the Doctor and Rose enjoy saving the world and doing good deeds. There’s lots of grinning and jesting and having a good time and they very much feel like the team they are.

From the moment the TARDIS materializes between the two dumpsters there’s a vibe that “Fear Her” only wants to spin a sweet, playful yarn, which when it comes down to it is the sum total of its agenda. Even the Isolis alien is only a child who’s lost its way, doing nothing more devious than what’s in its nature. Another “Lantern” parallel: The disappearance of half the team for the final act—only here it’s the Doctor, leaving Rose to effortlessly save the day.

Rose: “They keep on trying to split us up, but they never ever will.”

The Doctor: “Never say ‘never ever’.”

Rose: “But we’ll always be OK, you and me. (pause) Don’t you reckon, Doctor?”
The Doctor: (looking up into the night sky) “Something in the air. Something coming. (pause) A storm’s approaching”.

“Fear Her” truly is the calm before the storm.

Next Week: The Sci Fi Channel broadcasts the two part story—back-to-back—which comprises the season-two finale: “Army of Ghosts” & “Doomsday”. (Sorry…no links – they’ll spoil you!) Tune in to the epic that begins with Rose Tyler proclaiming, “This is the story of how I died”.

Classic Who DVD Recommendation of the Week: Well crap – since I’ve never recommended a McCoy story, and since I just said that some of them are watchable, I’ll go ahead and give it up to “Remembrance of the Daleks”,the first story that made us believe a Dalek could fly. (“Survival” is scheduled for DVD release sometime next year.)

Wrong Is Right: The Political Jiu-Jitsu of Battlestar Galactica