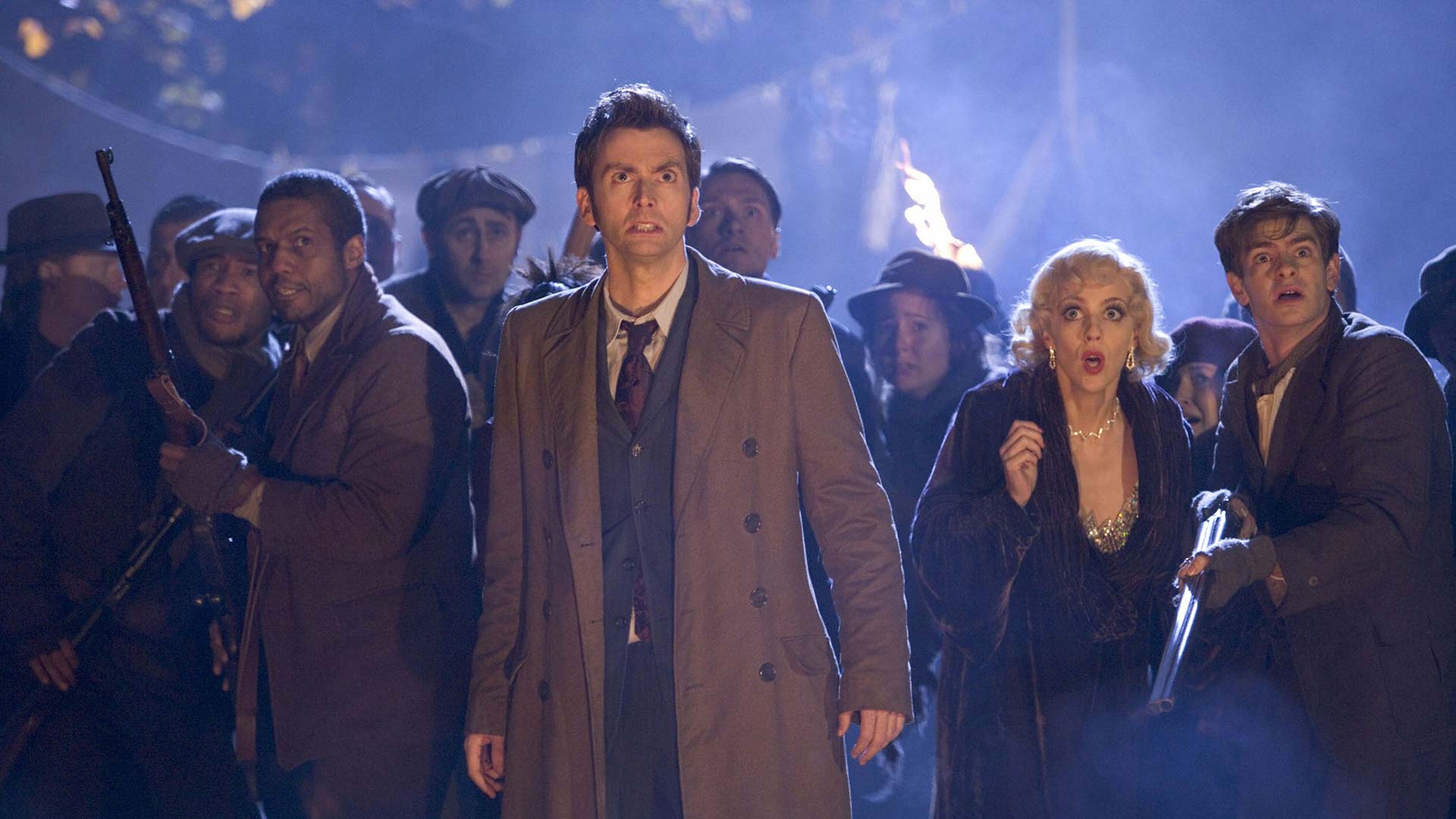 At which point Dalek #2’s “head” swivels around, and looks over its shoulder(?) to make sure they aren’t being watched and that no one is eavesdropping! The head swivels back to address Dalek #1.

The first time I saw this bit, I rewound it three times just to make sure I actually saw what I thought I’d seen, as well as to bask in it. See, a million Daleks flying through space or the sky can be great fun, but this is unprecedented defined. It’s funny, weird and mildly disturbing all at once and it shows the difference between the Cult of Skaro and all Daleks that came before them. They’re thinkers, doers and plotters with personality, and it’s that moment that’s a big factor in what makes this Dalek two-parter a cut above the pepperpot fold.

Any Dalek story that attempts such bold revisionism is bound to be a mixed bag, and this two-parter most certainly is. Nearly every step forward is hindered by a step back. A good example is the Pig Slave/Dalek raid on Hooverville, which is just glorious, exciting fare up until Solomon (Hugh Quarshie) makes his grand speech—at which point it’s borderline laughable. It’s irresponsible of the Doctor to not step in, grab the guy and push him into the background, as he of all people should know the deaf ears onto which the words are falling. Or are they? Back at Dalek HQ, Sec is moved by what Solomon had to say, which is a triumph, but then the Doctor jumps in and begs that they kill him. Problem being, the Doctor plays this card twice within the span of 45 minutes (in Hooverville and later in the theatre) and in hindsight it takes us to an ineffective dramatic stalemate.

The biggest problems with this two-parter are found not in the Daleks, but in the writing of the Doctor (David Tennant), who’s all over the place. If the Doctor, the show’s guiding force, isn’t consistent in his actions and thoughts, then there’s no reason for anything else to be. One minute he hates the Daleks and everything they stand for, the next he’s agreeing to help them survive, all in the midst of their disgusting slaughter. His reaction to their grand scheme of genetically transforming humans into human Daleks is baffling; he doesn’t even seem bothered by the loss of all these lives. They’ve effectively killed thousands of humans who are laying in wait to be altered, but because of Sec’s transformation into something “else”, the Doctor is willing to listen and help. Jesus! Shouldn’t he know by now that no good can come of this? Instead he appears to see a brighter tomorrow for the Daleks; the Time Lord should never be written as that optimistic. Luckily the three untainted members of the Cult step forward and make it all “right” by adhering to Dalek form through their overpowering and enslavement of Sec.

And who built the expansive catacomb system and how long did that take? When Doctor Who mucks with history it can be great fun so long as it dovetails with what we know to be true, but if we’re to buy into the notion these events actually happened (work with me here), then somewhere beneath NYC this Matrix-esque structure still exists. Further, there’s the absurd notion of the Doctor transferring Time Lord DNA into the proto Dalek humans, which makes sense only if you accept that a “gamma strike from a solar flare”—which inexplicably takes the form of a lightning bolt—could carry DNA of any kind into a waiting host. What. The. Fuck? When it comes down to it, the dramatic resolution of this entire affair is a big mess. If it all sounds confusing, viewing it’s twice the chore and writing about it is maddening, because I know I’ve skipped over half a dozen plot points.

In the story’s final moments, again the Doctor goes schizo by offering to help Dalek Caan simply because he doesn’t want to be party to genocide. It’s a sweet sentiment—but one that, given everything he’s gone through with the Daleks (not only in this story, but in total), I simply didn’t buy. Caan initiates “emergency temporal shift” and he’s gone, sure to reappear at some point next season. The new series started with one Dalek, and now it’s come full circle. The Doctor’s brief mention of Davros, the Dalek creator, is sweetly fan-pleasing. If Davros were to return, it’d be interesting if Caan somehow became the Dalek creator, dramatically taking the entire Dalek saga into some bizarre, improbable time loop.

And yet despite its failings, the story’s got some great stuff onto which viewers can hang if they’re willing to look past the nonsensical plot. The character of Dalek Sec (Eric Loren) is a grand creation (his speech patterns are awkward, yet ideal for how a human Dalek would/should speak), and his feeling that the Daleks’ failure fell squarely on the notion that they weren’t human enough is a wonderful idea and likely the dramatic crux of a story rooted in Doctor Who’s ongoing quest to showcase the beauty and strength of mankind. The most effective demonstration of this is in the B-plot of Tallulah (Miranda Raison) and Laszlo (Ryan Carnes, still of Desperate Housewives), who (along with Sec) emerge as the primary reasons to enjoy this tale and ultimately make it worthwhile. This is clearly not about great plotting, but about ordinary people caught up in extraordinary circumstances. I was set to write off this story completely if not for its quiet finish: The Doctor’s inability to reverse Laszlo’s physical appearance and Tallulah’s decision to stay with him regardless. It’s this sort of thing that makes Doctor Who worth wading through stuff like lightning bolts hitting the Empire State Building and the Doctor prancing about on theatre seats.

In last week’s talkback, Camera Obscura said this was “pretty much the nadir of the season”. I won’t disagree—but if we can agree that it is, then it’s all uphill from here and Season Three remains the first new Who season lacking a story that I just didn’t appreciate on any level. That, faithful viewers, is progress—and we didn’t need to splice genes to arrive here.

Oh yeah—anybody else notice that the primary Dalek-human-Time Lord-zombie (below left) looked an awful lot like Al Gore?

Next Week: Spend time with the Jones’, see a 76-year old man look 30, and watch the mysterious Mr. Saxon make his first move in “The Lazarus Experiment”.

Classic Who DVD Recommendation of the Week: Last week I said the current two-parter was the “weirdest Dalek story ever filmed”. After some thought, I realized the error of my ways. The Evelyn Waugh-inspired “Revelation of the Daleks” with Colin Baker and Nicola Bryant & guest-starring Alexei Sayle, Eleanor Bron and Clive Swift may very well be the weirdest…but it’s also one of the best. And it has Davros!

5 for the Day: The Simpsons