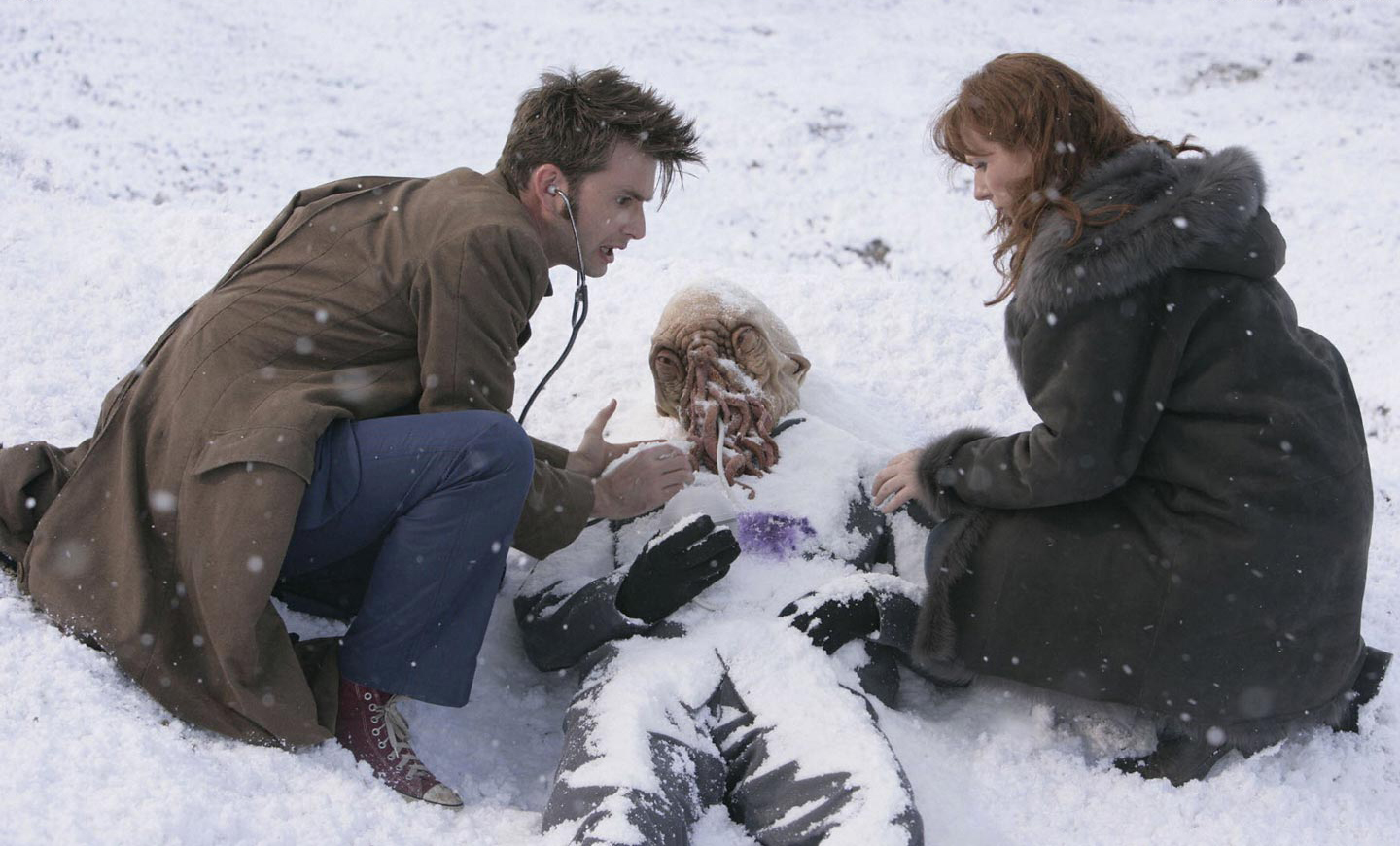 “Planet of the Ood” is a really strange episode (and yes‚ÄîI had to restrain myself from describing it as odd). I don‚Äôt know if anyone was exactly crying out for more Ood, but since they played second fiddle to the Beast in “The Impossible Planet” two-parter, they‚Äôre a logical choice to revisit, as we didn‚Äôt get to know all that much about them. What we did learn about them is explored in greater detail here and it‚Äôs nice to see that they remain benign creatures so long as outside parties don‚Äôt abuse them through ulterior motives.

A Booming Commercial Voiceover: “The Ood! They came from a distant world. They voyaged across the stars. All with one purpose…”

The picture zooms into an Ood holding a cup of tea.

Ood: “Do you take milk and sugar?”

The jokey pre-credits sequence misleads, as the rest of this episode is mostly a somber affair. The Doctor (David Tennant) sets the controls for random and, much to Donna‚Äôs (Catherine Tate) discomfort and dismay, the TARDIS materializes on an icy, snow-covered planet in the distant future. Upon seeing a rocket traveling overhead, they journey across the frozen wasteland to search for civilization. In a scene weirdly similar to one in “Revelation of the Daleks” (also directed by Graeme Harper), the pair comes across a dying Ood. He‚Äôs been shot, but tells them “the circle must be broken.” His eyes shift into the familiar demonic red followed by immediate death. The Doctor informs Donna about his previous meeting and suspects that once again, something is Oodly amiss. They spy a giant factory in the middle of nowhere and proceed doing what they do best‚Äîinsinuate and investigate.

The factory is the home base for Ood Operations, the corporation responsible for the processing and selling of Ood to the galaxy. The Doctor notes that he visited this system years ago‚Äîa reference to the William Hartnell story, “The Sensorites.” The planet is the Ood-Sphere (the creatures‚Äô home world), the year is 4126 and the Ood are once again acting up‚Äîonly in addition to the Red Eye affliction, other Ood are even going rabid. Overseeing all the commerce and attempting to maintain control is Klineman Halpen (Tim McInnerny of Blackadder fame), a greasy exec type seemingly interested in only the bottom line and his continued hair loss, which he attempts to combat by repeatedly downing a solution provided to him by his own personal Ood, Sigma (Paul Kasey‚Äîan actor who‚Äôs played many monsters on Doctor Who, Torchwood, and The Sarah Jane Adventures, yet gets little recognition). The Doctor and Donna are quickly found out to be shams and find themselves on the run, piecing together one new clue after another. Along the way, Donna becomes increasingly sympathetic to the Ood and horrified by their treatment. In one sequence, they discover the shipping warehouse‚Äîa giant room full of enormous metal crates containing a hundred Ood apiece.

Further down the line, they discover a small group of unprocessed Ood, at which point “Planet of the Ood” really hits its stride: the group are revealed to possess secondary brains, which the species is born with and carry in the palm of their hands. Processing an Ood equates to lobotomy‚Äîthe secondary brain is removed and replaced with the glowing translation sphere, and in essence leaves them little more than cattle. Further, there‚Äôs the “Song of the Ood,” a sad, haunting melody they psychically project that only the Doctor is seems to hear. He does his Spock mind meld on Donna so that she too can hear the song, but it is too much for her and she breaks down into tears. This episode may not be perfect on every level, but this scene most certainly is. It‚Äôs a genuinely alien close encounter, and full of quiet, unimaginable horror, yet is simultaneously touching and real.

Donna: “I spent all that time looking for you Doctor, because I thought it was so wonderful out here. I wanna go home.”

When the time travelers confront Halpen directly, Donna seems to understand the Ood better than even the Doctor.

Halpen: “The Ood were nothing without us‚Äîjust animals roaming around on the ice.”

The Doctor: “That‚Äôs because you can‚Äôt hear them!”

Halpen: “They welcomed it! (chuckling) It‚Äôs not as if they put up a fight.”

Donna: “You idiot. They‚Äôre born with their brains in their hands. Don‚Äôt you see‚Äîthat makes them peaceful. They‚Äôve got to be, ‚Äòcause a creature like that would have to trust anyone it meets!”

Like many a corporate bigwig, Halpen believes that the current changes in the Ood are merely a bump in the road… but then the Ood stage a full-on revolution, killing any and all the come into their path. (Was I alone in having flashbacks to “Conquest of the Planet of the Apes?”) In the midst of the chaos, the Doctor and Donna discover a secret warehouse containing a third brain‚Äîa giant, collective organ that completes the Ood species and brings them together. But Halpen and many who came before him have kept it in a state of inactivity for 200 years with a circular force field (which must be broken). A fed up Halpen intends to destroy it and the Ood for good‚Äîbut he‚Äôs stopped, the force field deactivated, and in what‚Äôs easily the episode‚Äôs most bizarre development, realizes the hair tonic Sigma‚Äôs been feeding him for years has been slowly turning him into an Ood. And dramatically on cue, he does just that.

With the Ood finally free from servitude, the Ood‚Äôs song spreads across the galaxy and all Ood will be returning to their home world‚Äîanother unbelievable development, as the end of Ood slavery would undoubtedly wreak galactic havoc the episode either fails to or doesn‚Äôt have time to address. Sigma tells “DoctorDonna” there‚Äôs room in the Ood song for them.

The Doctor: “Oh, I‚Äôve…I‚Äôve sorta got a song of my own, thanks.”

Sigma: “I think your song must end soon.”

Sigma: “Every song must end.”

At which point a version of the “Doomsday” music cue associated with Rose briefly invades the soundtrack.

“Planet of the Ood” probably won‚Äôt go down as one of the great Doctor Who stories, but it‚Äôs hard to dislike because it‚Äôs so sincere in its mission to be a simple morality tale wrapped around a thorough exploration of an alien species. Again the acting is superb, and Catherine Tate has really made a solid impression in a very short period of time. As bold a creation as Rose was when the series began, Donna takes the Doctor/companion relationship into a refreshing and important direction. Yes, she keeps the Doctor in check, but even more noteworthy, Donna‚Äôs genuinely affected by the wonders she sees‚Äîsometimes joyously, but often painfully. Donna Noble may be closer to “us” than any companion the series has ever presented, and in turn she‚Äôs having an eye-opening effect on the Doctor. Tennant has become so comfortable with the Doctor that I‚Äôm actually starting to see why some people had problems with his work in the previous seasons.

Some random stuff: Loved the Warhol Ood painting. Hated the Simpsons D‚ÄôOh! gag at first, but after a second viewing actually appreciated it. Tim McInnerny does a fine job. The scene of the Doctor dodging the giant claw sticks out like a sore thumb, but works wonderfully for what it is. The Song of the Ood is as evocative a piece of music as anything heard in the series yet. Oh, and the bees: this is the second time the disappearance of the Earth‚Äôs bee population has been mentioned, which makes it either foreshadowing or a red herring. Finally, in addition to the classic Who already mentioned, some of “Ood‚Äôs” structure recalls “The Robots of Death.” This is about the third or fourth time I‚Äôve noticed that story‚Äôs influence on new Who, and if you‚Äôve never seen it, it‚Äôs well worth checking out despite what I‚Äôve been told is a very silly title.

Next Week: The return of Martha Jones, the reenvisioned UNIT, and the reintroduction of the warmongering Sontarans in “The Sontaran Stratagem.”

Classic Who DVD Recommendation of the Week: Discover the Sontarans ahead of time in their very first story, “The Time Warrior,” starring Jon Pertwee. It‚Äôs also the tale that introduced a certain Sarah Jane Smith.