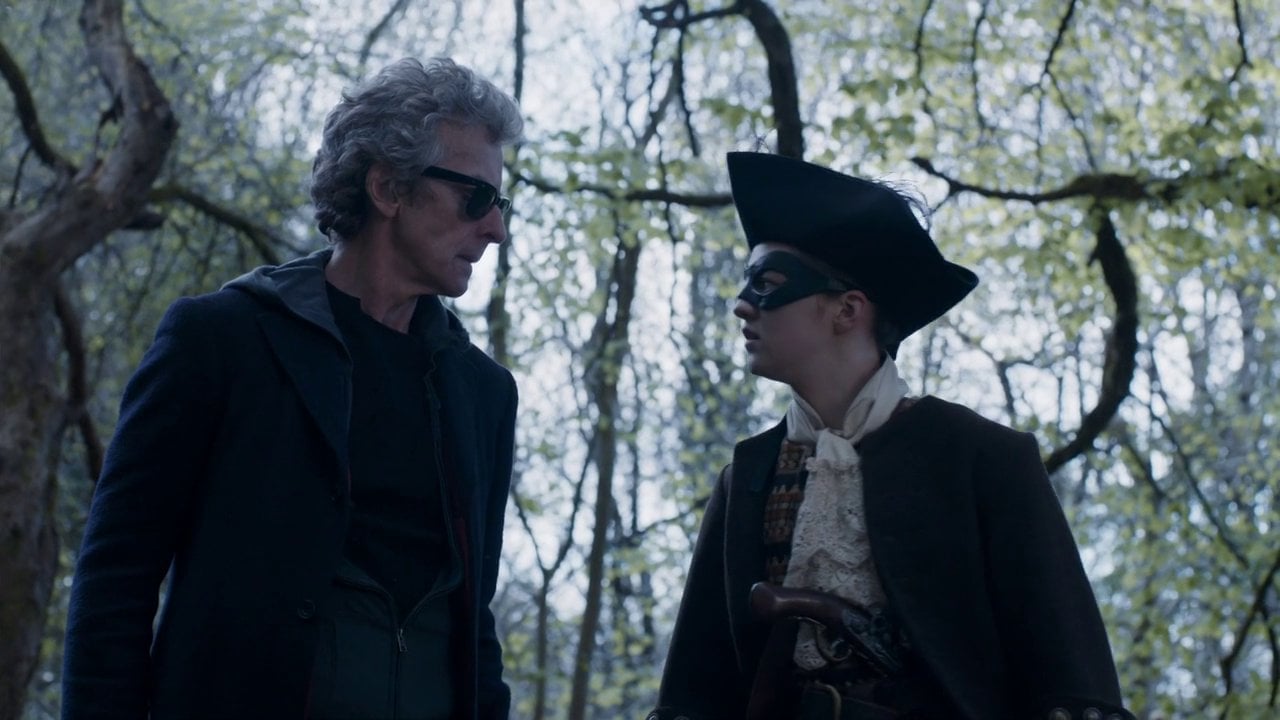 Although the title deliberately mirrors that of Doctor Who’s last episode, giving the impression they form the two halves of another two-part story, “The Woman Who Lived” is actually a sequel to “The Girl Who Died” rather than a simple continuation. Last week, the Doctor (Peter Capaldi) saved the life of the dying Viking girl, Ashildr (Maisie Williams), by embedding in her an alien “repair kit” capable of extending her life indefinitely. Now, over 800 years later, he happens to again encounter the woman he effectively made immortal, and is forced to deal with the consequences of his impetuous act of compassion.

The story was written by Catherine Tregenna, whose previous Doctor Who involvement was in writing four episodes of the spinoff series Torchwood, which revolved around another character who became undying after an encounter with the Doctor: Captain Jack Harkness, who’s name-checked late in this episode. Here she’s dealing with two immortals, one free to roam the universe and jump around anywhere in time, and the other stuck on Earth, living through the days one after another, the same way we do.

The conflict between them is placed right at the heart of the episode by simply omitting the Doctor’s companion, Clara, from the story. He arrives on his own in the anarchic England of 1651, a land infested with highwaymen just after the convulsion of the Civil War, tracking an alien artefact. Almost immediately he stumbles into a carriage being held up at gunpoint by “The Knightmare” and soon discovers that, not only is this masked robber the girl he once saved, the amulet she was trying to steal is the very thing he was seeking.

Her role in the previous episode may not have been the greatest of challenges for her, but here Williams gets a far wider range of material to show what she’s capable of. Ashildr has grown greatly: As she points out, 10 thousand hours is all it takes to become proficient at any skill, and living more than eight centuries has allowed her to accomplish many things. On the other hand, her memory remains merely human-sized, so her past simply drains away unless she writes it down. She has all but forgotten the very name “Ashildr,” and has let go of her memories of the Viking village. Now she calls herself simply “Me” and lives by herself (“No one’s mother, daughter, wife…my own companion. Singular, unattached, alone”). The scene of the Doctor reading her journal entry recording how she lost her children to the Black Death, and her resolve never to have any more, is perhaps the most powerful in the episode.

Ashildr is initially happy to see the Doctor again, thinking he’s come to take her away from this existence and let her travel with him. His reluctance to do so leads to her trying every argument at her disposal to convince him, in a series of compelling scenes where Williams runs the gamut from rebellious teenager to a cynical, detached woman, whose empathy for others has been crushed by the weight of ages. Capaldi in turn shows the Doctor horrified at how Ashildr has suffered and changed, while standing firm on his insistence that it wouldn’t be good for them to be traveling companions, and looking for a way to reconnect with the person she once was.

The remainder of the plot is serviceable but slow-paced at times, and definitely secondary to the contest of wills between Ashildr and the Doctor. There’s some amusement to be had when the Doctor falls into the role of the Knightmare’s sidekick, as they creep into a manor house to retrieve the alien amulet. Tregenna clearly took inspiration from last season’s early episodes when characterizing the Doctor, particularly his casual rudeness and obliviousness toward all humans. “Robot of Sherwood” is an obvious influence, with the Doctor’s complaints about the puns and banter as the Knightmare clashes with rival highwayman Sam Swift (Rufus Hound). When Sam is captured and sentenced to be hanged, “Lady Me” seizes the opportunity to implement her scheme involving a leonine alien called Leandro (Ariyon Bakare), using the amulet’s ability to open a dimensional portal and escape Earth with him. The choice to employ a comedian like Hound in the role of Sam allows an amusing analogy to a stand-up routine in the highwayman’s performance at the gallows, but Hound does well at showing the desperation in Sam’s eyes as he keeps gabbling groan-worthy jokes, knowing that once the audience stops laughing, he’s finished (as the Doctor says, “It gives a whole new meaning to ‘dying on stage’”).

The Doctor realizes almost instinctively that Leandro’s motives aren’t what he claims, once he learns that the amulet requires a death to function. But either through naïveté or wilful blindness, Ashildr doesn’t see it until the amulet is draining Sam’s life away and Leandro reveals his true callousness as the portal opens and people start dying. A neat resolution is provided by the second “repair kit” chip which the Doctor left for her last episode precisely so that she would not be alone; when asked earlier why she had never used it, she had said that “No-one’s good enough.” Now she makes the choice to sacrifice it to save Sam and close the portal.

There’s no completely happy ending, but Ashildr has come to accept the Doctor’s argument that they both need ordinary humans, with their mayfly-like lives, around them. She’s content to remain on Earth as “the patron saint of the Doctor’s leftovers,” and they part on good terms. In a cute final scene in the TARDIS, Clara re-joins the Doctor and they’re off on another adventure, but as the Doctor looks at his “mayfly” companion, the foreshadowing is laid on thick as she tells him cheerfully that she’s not going anywhere.

Next Week: Back to the here and now, as the Doctor, Clara, and their UNIT friends are caught up in “The Zygon Invasion.”

Classic Who DVD Recommendation: The classic series also had a case where one adventure was immediately followed by another several hundred years later which arose directly from the consequences of the first, in 1966’s “The Ark,” starring William Hartnell, with Peter Purves and Jackie Lane.

Review: Into the Badlands: Season One